That was during the interim between the Golden Age  and the beginning of the bombastically-promoted “Marvel Age”.

There are fascinating continuity shenanigans behind the character, but this profile is a straightforward, “chronconned” one. As usual for writeups.org it uses publication dates for the timeline.

This is part of a chronological series about Jack Monroe, which should be read in order :

Bucky has been injected with the Super-Soldier serum. However, he did not have his condition stabilised by the so-called “vita-rays”. His strength is thus superhuman for a teenager of his stature, and I would assume that his endurance follows suit.

Bucky’s strength and the training he received from “Captain America” make him an excellent acrobat.

Jack Monroe was born in Clutier, Iowa, in 1941. Although he was too young to realise it, the small town had a secret. Most locals were part of a secret Nazi ring. His father Ed, in particular, had a sort of Nazi shrine in the basement.

Ed forbade Jack to ever go into the basement, but this only made the little boy determined to go there – for which he was beaten whenever caught.

During the late 1940s Jack was the school bully, leading a pack of slightly younger boys.

In 1949, Jack, still not understanding the significance of the uniforms and other symbols in the basement, brought some insignia for the show-and-tell at school. The schoolteacher, presumably new in town, was horrified and alerted the FBI. When agents came Jack was enthusiastic about meeting real G-Men. Not understanding the situation he told them what he knew.

A few days later, Clutier was swarming with Federal forces. Everyone was investigated, and most adults arrested. All children (including Jack’s teenaged sister Jill) were moved to foster homes or parents.

Jack was horrified as he realised he had essentially destroyed his home town. Even though he now understood what the ring was about, he felt crushed by guilt.

Ed Monroe died in jail in 1963, from cancer. Mary Ellen Monroe was let out of prison in 1975, and led an undistinguished life until 1992, when a bad stroke sent her into a coma.

After the Clutier raid Jack became a foster kid. He eventually ended up in McMurtry, Connecticut. He tried to forget his home town, and became a comic books fan — especially Timely Comics’s Captain America tales.

This was somewhat ironic, since the authorities had sent him there with a specific purpose in mind, having much to do with Captain America.

A teacher at his school was William Burnside, a history professor obsessed with the legacy of Captain America. Years before, Burnside has his legal name changed to “Steve Rogers” – his investigations during his PhD thesis had led him to unearth much of the secret story behind Captain America.

Furthermore, “Rogers” had discovered the formula for the Super-Soldier serum in the lost notes of a Nazi spy.

Bargaining with the government, “Rogers” had offered to use the formula on himself and become the new Captain America. Unlike the general public, this scholar knew that several men had worn the uniform since the disappearance of the original.

Interested in having Captain America “return” to help with the war effort in Korea, the government agreed to the deal. They even provided plastic surgery so that Burnside would look like Steve Rogers.

Mere weeks later, the 1953 ceasefire was signed. Captain America was never activated, but the government knew that “Rogers” would sooner or later crack and strike out on his own.

Some members of the House Un-American Activities Committee  wanted “Rogers” to become their deniable asset. As part of the manipulation they had Monroe sent to McMurtry to attend his class.

They knew that Monroe would attract “Rogers”’s attention – being a huge Captain America fan, Monroe was universally called “Bucky” by the other kids. Monroe soon became Burnside’s protégé. The HUAC plotters were confident that he would become his sidekick.

Though Burnside had assumed that the government had no information about the Super-Soldier serum, they actually knew more than he did. In particular, they realised that a person using the serum without Vita-Rays treatment would go insane.

This made it impossible to use “Rogers” as an official agent, but some considered that he would be a great deniable asset to throw in the general direction of alleged Communists.

Monroe was considered a propaganda asset. If he was ever exposed or killed, the plotting HUAC members assumed that the history of the “Clutier kid” would be a rousing symbol of the fight against un-American activities.

When “the Red Skull” (actually an impostor called Albert Malik) took over the UN building, that was the spark for Monroe, then aged 15.

Jack already knew that “Professor Rogers” had the serum and replica uniforms. Monroe told Burnside that it that it was time for Captain America and Bucky to return and defeat the evils of Communism (don’t ask). He convinced the historian.

The two men injected themselves with the serum, dressed up, and left for New York. Thus a new Captain America and Bucky for the 1950s burst on the scene, easily defeating the faux Red Skull and his goons.

Reds under the bed

“Cap” and “Bucky”, whom most people assumed to be the same heroes as during the war, were quite popular with the public. Bucky was even something of a teenage heartthrob.

They busted various spy rings, such as the operation ran by Arnold and Lupa Lupoff (both Communists wanting to steal the secrets of the atomic cannon), the plots the Red Chinese agent called the Man with No Face, or the Soviet robot Electro.

However, the idols of millions gradually grew unhinged from the chemicals in their veins. They started seeing Reds everywhere. In particular, Americans who were not pale-skinned enough to their liking quickly became suspects of Communist sedition. Soon, they were beating up random people in Watts or Harlem, and the government decided to pull the plug.

The two men were summoned to Washington, but once there they refused to surrender. They were thus brought down by a prepared barrage of non-lethal projectiles.

Even after a thorough medical examination, no clear solution to cure their insanity emerged. Thus, the duo was placed in suspended animation.

Monroe did have a remarkable physical resemblance to the original Bucky Barnes.

Young Bucky was angry and confused ever since Clutier. He likely had been subjected to early indoctrination in Nazi values by his father (most Clutier children were, including his sister). What Jack wanted was a new dad and a symbol of strength and moral clarity — such as Captain America.

Once he was at “Cap”’s side he was a fearless brawler and adventurer, looking straight in the eyes of the despised enemy and laughing at death, like the original Bucky.

“You guys take that back ! You heard me ! Take back all the things you said about Captain America ! Professor Rogers is telling the truth !”

“Gosh, Cap ! Not only do we have to find the spies who are after the firing pin… But we’ve also got to fight… the Executioner !”

“You won’t get away with this ! Maybe you’ll kill us… but Cap will get you !”

Drawbacks:
Age (Young), MIA toward violence, Attack vulnerability (-1 CS OV/RV when hit on the head from behind), MIA toward seeing Communist plots everywhere. 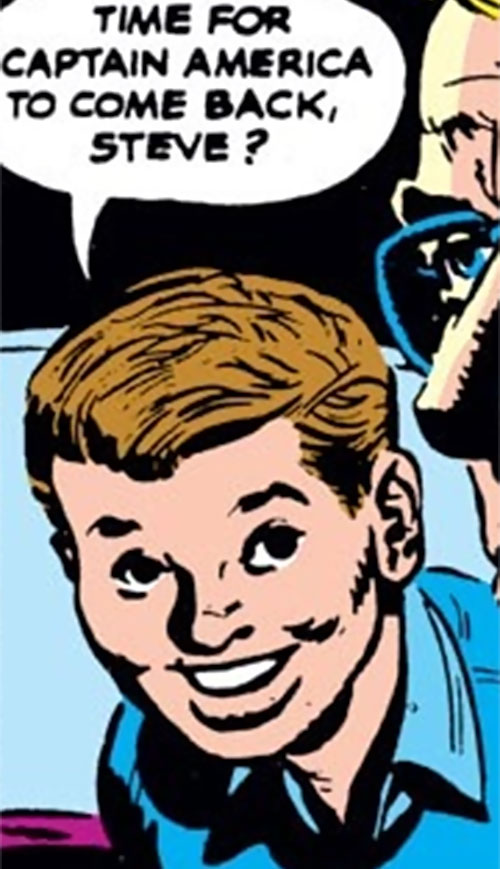 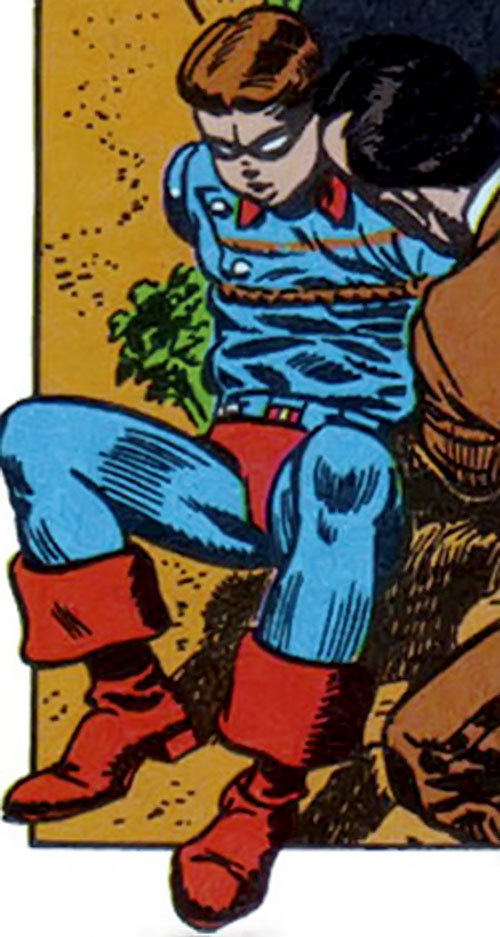 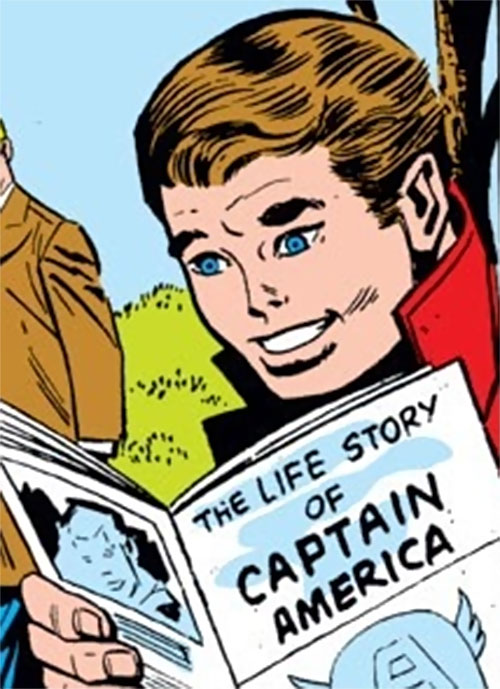 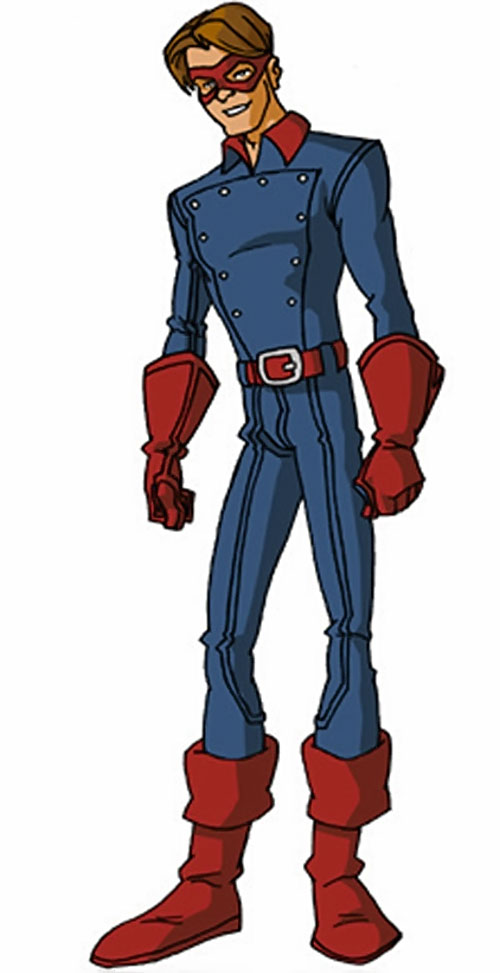