Married With Children was a satirical sitcom that ran from 1987 to 1997. The over-the-top humour about a crudely dysfunctional American family was relatively novel back then, and gave the series an eager following. I see it as one of the greatest shows ever!

And, by the way, thank you, David, for the signed TV-guide at the 2012 Sci-Fi Fair in Stockholm. This profile is in honor of a work well done!

Bud Bundy is physically surprisingly resilient – must have gotten that from Al. It takes unusual force to put him down for the count. He is also somewhat stronger than he looks and he fights dirty too.

He has book smarts (probably the only Bundy ever to be an A-student) and can actually be quite the eloquent speaker, which he uses well in his extra work as an agent. He is potentially smart and could become something, but he’s severely lacking in social skills.

Naturally, being a Bundy he is an expert at insults and cheesy pickup lines.

Bud shows off his incredible power of nothing particularly appealing.

Bud Bundy is the desperate, socially inept son in the Bundy family living in Chicago. He spends most of his time trying to score with the babes, and on occasion even succeeds (it’s a numbers game anyway…).

Always an A-student he eventually got into Trumaine University. From there he managed to get onto the Dean’s list to move on to Oxford University. While initially failing to join a fraternity he created his own: “Alpha Gonna Get‘em”, only to later instead join “Gamma Gamma Sigma Pi”. 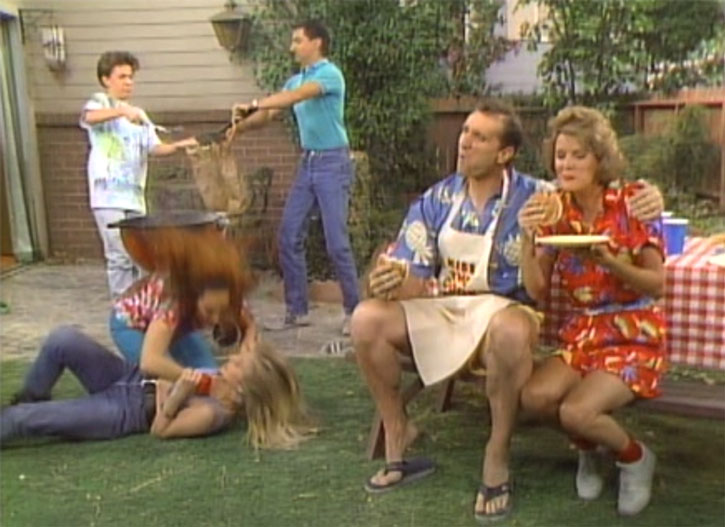 He worked extra at the Department of Motor Vehicles, but was fired because he worked too much. For a while he was an apprentice chimney sweeper. He got the most success as a promotion agent, being Kelly’s agent, but also the agent for Tina Yothers and Delta Burke!

Bud has had countless insane adventures in his crazy life. As it’s impossible to list everything, I just say: go watch the show now!!

Bud Bundy is a small dude who impresses no one but himself.

Bud Bundy is a teenager trying to score either with the babes or with a quick scheme. He is seemingly socially inept. Despite his best laid plans he often fails in his pursuits, which can be depressing. He often bluffs and tricks his sister out of all her money, but he usually cooperates with Kelly against outside threats.

While he is relentlessly teasing his sister Kelly and messing with her he’s usually on Al’s or Kelly’s side against outsiders. But otherwise he will have fights with them over small matters. Kelly is actually like a long term study object in stupidity for him, and he isn’t very impressed by his mother, Peggy, or the family dog, Bud, either.

Bud is constantly impressed by himself in an attempt to build confidence, to be cool and be successful!

He pretty much always a cowardly schemer working to get girls, but has a disastrous track record. However, when he does succeed in the rare event it has been with real bombshells. He comes up with new “cool” personages every year to sway the babes and does insane, life-threatening stunts to impress ’em.

Bud makes regular use of his daddy’s complete collection of “Playboy”s and “Big ’Uns” in the cellar. It seems that both Al and Bud have separate subscriptions for the Playboy magazine.

Failing to get dates he regularly watches Dateless Dude late night theatre during the weekends. He is sometimes relentlessly teased by his family for having a pathetic sex life.

Other than that, he’s a regular visitor at the nudie bar to which Al introduced him on one of his birthdays. 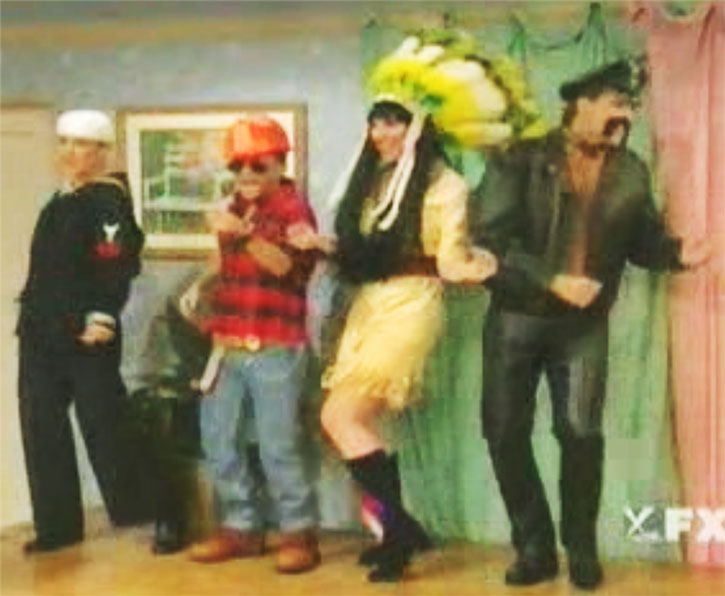 Bud enjoys a good spanking, either delivering it himself or else how watching violence being committed. He thoroughly enjoys his father use violence on Kelly’s boyfriends or others. He then high fives Al for a job well done with a big smirk on his face. Al in his turn always cheers on Bud when he’s going after girls (telling Bud that he Bundified a girl if he succeeded).

He has, for example, had an occasional things going with Marcy Darcy’s niece, Amber, with his classmate Ariel and with his cousin Jimmy’s then-girlfriend. While he has tried every trick in the book, and in fact created several new tricks, to get women, usually failing in the attempt, by Season 10 he had actually had 8 women to my count.

Of course, some of these may have been dream sequences, which Bud usually believes when he’s having a success.

Bud surprisingly often serves at the only voice of reason in the family. While having no respect for his elders whatsoever (or anyone else really for that matter) he does want the family not to fall apart into complete ruin.

He keeps salt, pepper, ketchup and a condom in pocket for emergency situations, and given the family’s insane antics he has had opportunity to use them all. He studies hard so that he can get the hell out of the house to get a better life!

According to one episode his birthday is January the 22nd.

“Wow, I feel like I died and went to dad’s happy [Playboy] box in the basement !”

“Excuse me, my family, but as the only one among us who hasn’t yet been finger-printed – do you actually think no one is going to notice that we’re living in aisle four in the supermarket ?!”

“I know what I’m gonna do with mine (profits). I’m gonna share mine with the poor and unfortunate. Yup, the poor, unfortunate babes who have never had the experience of waking up with a Bud in their hands.”

“Now, I’ve carefully crafted my look over the years into the finely honed babe train you see before you. To look at me is to love me.” [Power Walker then unexpectedly clobs him one in the face mistakenly for his father’s actions]

“Are you kidding ?! Why does everybody look at me and just assume that I’m a virgin ? ‘Cause I’m not ! Could a virgin tell you the name and last book read by every Playboy centerfold in the last 10 years ? I’ve been there and back, baby ! I know the female body like I know my own hand. I mean the back of my hand. Bud, oh, Bud, they scream ! Why, once I even took a girl… blahblah…”

“I know you models are always watching out for your weight… care for a Bud Light?”

(Having tried to impress girls) “Well, I did it. I survived the river. Ah, I’ve never felt so alive. The rush of the water, the feeling of flight as you are launched out of the boat. And the good clean crack of a pelvis as it meets one of nature’s finest pointy rocks. And, as I lay there clinging for dear life, I couldn’t but help notice the beauty of nature as it sat there pecking at my eyes. It tried to carry me to its young ones, but I guess the joke was on it, ’cause I was too heavy and it dropped me in the part of the river that the Indians used to call ’Nutcracker Falls’. From now on it’s life without girls. I’m through with them, I mean it this time.”

“A funny thing happened to me today. I was in my dorm room studying when a bunch of babes came in and invited me to my first college pyjama party. But not just any pyjama party; a bottoms only pyjama party.” [Al gets excited] “Save your pathetic high-five, because just as I was about to see some Midwestern corn-fed boobies I was dragged away by the campus police. It seems that every single check I wrote to the college bounced… you have got anything to tell me ?” (Al and Peggy had spent his college fund)

“Family, this is my lucky day. I was at school and there was one of the great parties of all of history… a wet T-shirt contest. Large-hootered Mid-Western farm girls who were sliding down this bare suit half naked. There was dancing, there was loving, my first big frat party. Just a great bunch of guys having the time of their lives. And it took them a full fifteen minutes to see me peeking in the window and kick me out ! Ah, dad, you should’ve seen them. There were big ’uns, there were little ’uns, round ’uns, pear-shaped ’uns, here ’un, there ’un, everywhere an ’un and ’un.” [people stare at him] “Oh, sure, like I’m the only peeping Tom in this family !”

“Yes, ’tis the death of Bud Bundy, lonely boy. And the birth of Stud Bundy, only boy.”

Well, Bud got eaten when his father Al turned into a zombie. There is no coming back from that now, or is there?

Note:
Most of the series Bud, as a small dude, had a STR of 01 APs, but he would eventually have grown up enough towards the end of the series to then deserve a STR of 02. 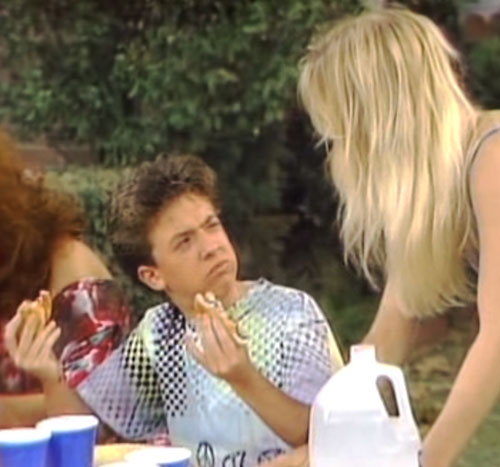 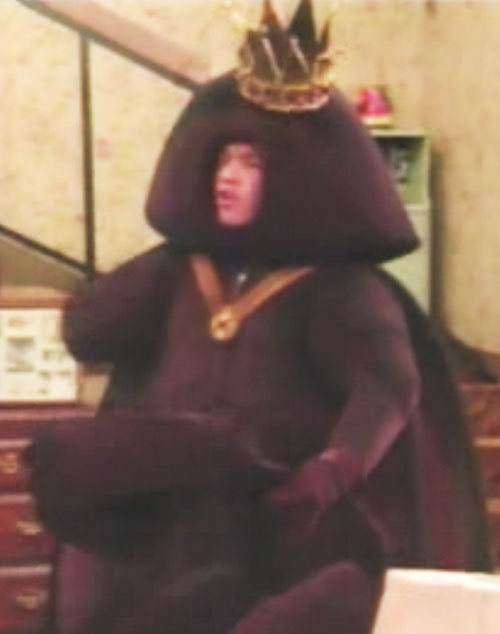 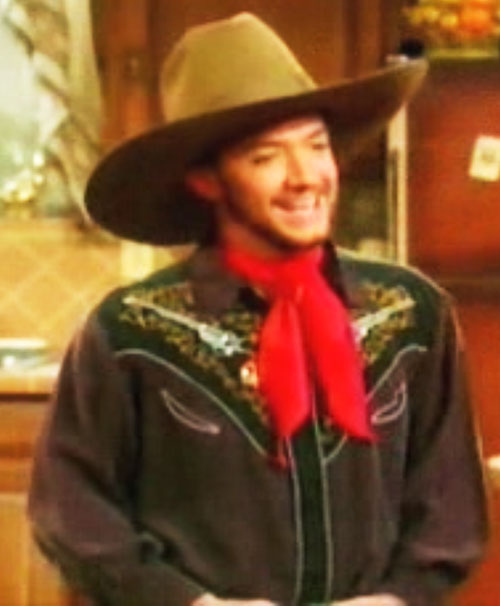 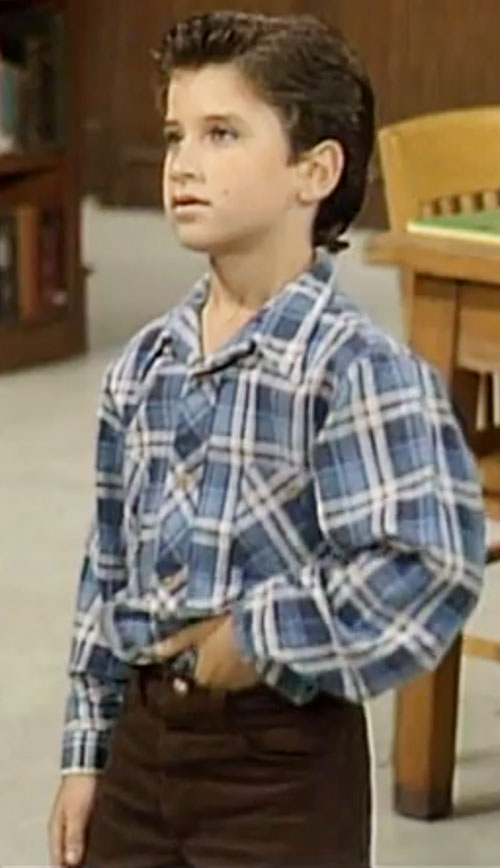 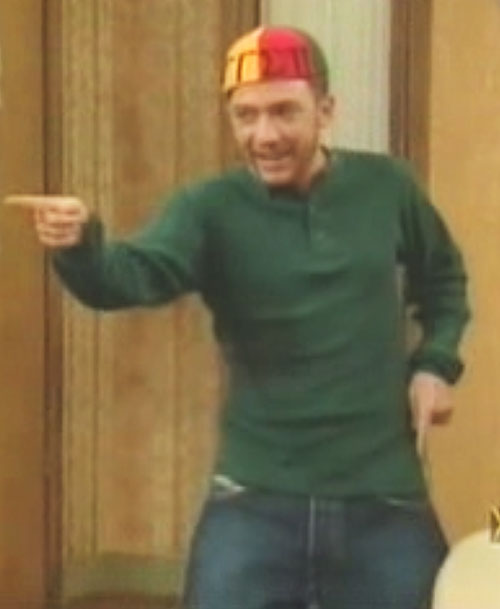 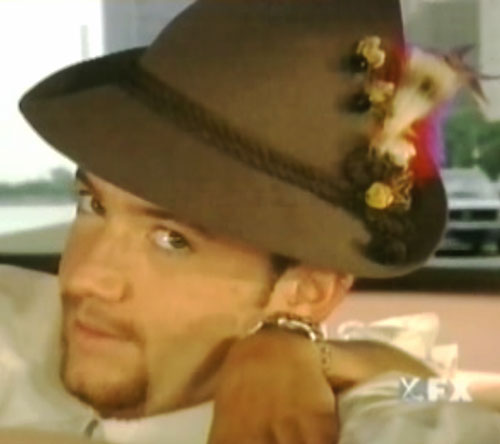 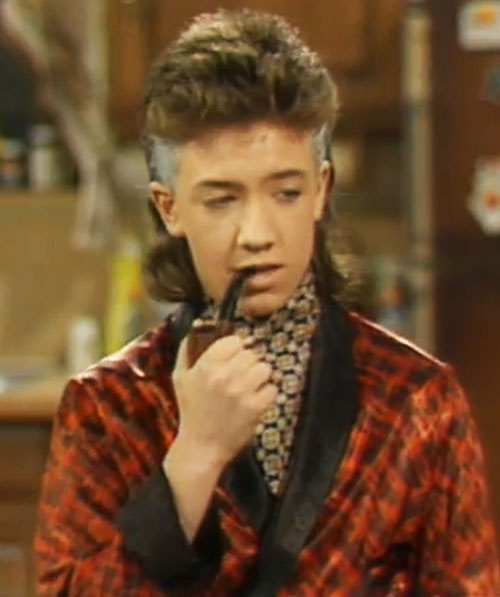