Buddy has the powerful build typical to his race, though he is slightly shorter and smaller than the typical “red” Heebies.

He is knowledgeable in outdoor survival in his planet’s wilderness, a competent dragon rider, and possesses some small skill with operating electronic devices.

Buddy was an extremely skilled fighter with his laserwhip, dodging ranged attacks from multiple opponents while simultaneously incapacitating two or three enemies in melee at a time. His easy-going, gregarious manner helps him work with others even when suffering from a profound communication gap.

There are few details available regarding the Heebies, a humanoid race that lives on an unidentified planet unknown to present-day Earth. There are at least two factions, one of which is remarkably more aggressive than the other.

The more aggressive faction, the Reds is physically distinguishable by the red epaulets and belts they wear as well as their bright red eyes (the other Heebies have hazel eyes).

The Reds made a practice of raiding Heebie villages and enslaving their inhabitants. The slaves would then be put to hard labor in the Reds’ prison mines or forced to compete in gladiatorial games in the adjacent arena.

While the other Heebies live in a technologically simple manner comparable to early human hunter-gatherer societies, the Reds lived in a city with a strange mixture of primitive architecture (some of which was clearly eroded) and high-tech electronics.

Whether this anachronistic mixture of decaying gothic architecture and advanced technology represents a cultural choice of the Reds or some sort of social decay is unknown. The Heebie Reds may even be servitors for a more advanced civilization entrusted with a few select high-tech artifacts in exchange for pressing the other Heebies into services or as rewards for other work.

One of the tribal Heebies, “Buddy,” put up an unusually fierce fight when his clan was attacked by the Reds. Engaging in a sort of lethal ballet, Buddy danced around the attacking Reds’ energy blasts while slaughtering numerous Reds who tried to engage him at close range. Buddy was eventually overwhelmed by sheer numbers (prologue to Heart of the Alien).

Buddy’s efforts earned him a special cage in the Reds’ prison mine, suspended in the air and isolated from his fellow prisoners. He was later joined in captivity by Lester Chaykin, a human physicist who was inadvertently transported to the Heebies’ world and subsequently imprisoned by the Reds.

Together the two special inmates escaped their cage and worked to escape the Reds’ prison. Even when separated, the two managed to find ways to help one another. Buddy was also able to free some of his fellow tribespeople.

In their final combined bid for escape, Lester was seriously injured. Buddy gathered him gently in his arms, took one of the dragon-like steeds perched atop the roof of the prison, and flew away with Lester borne in his arms. (Another World)

Heart of the alien

Buddy brought Lester back to his village, but was unable to save him from his injuries. Lester’s body was later cremated in the ritual manner of Buddy’s people. (Heart of the Alien)

(Eric Chahi, the creator of Another World and developer for Heart of the Alien, stated in interviews after the release of Heart of the Alien that he would have preferred to leave Lester’s fate more ambiguous as he did at the end of the first game. Due to that and Chahi’s lesser involvement with the second game, some fans of the games do not consider Heart of the Alien canon.)

Buddy is a very typical example of his species, a large slate-skinned humanoid with a blocky, muscular build. His head is particularly angular and completely bald, with hazel eyes that appear to be either amber of gray depending on the ambient lighting.

He is attired in black boots and a black outfit that looks like a women’s black one-piece bathing suit.

Despite his intimidating physiognomy, Buddy is rather friendly and patient, quickly befriending new people. He is also very brave and loyal, whether it means fighting valiantly against overwhelming odds to defend his tribe or coming back to assist Lester on several occasions when it would have been easier to simply flee.

As he did in Out of This World, the Heebie ally might well appear as a friendly prisoner on another planet or on a slaver’s starship. The lack of a common language can be played up to emphasize the alien atmosphere.

Note:
The Heebies do not speak English. This should not be considered a Drawback, since they normally have no interaction with any English-speaking beings whatsoever.

Drawbacks:
None on their own world, though Heebies would be considered to have Distinct Appearance (large, slate-skinned humanoid) and possibly Altered Anatomy (Physical) if they appeared on Earth.

This whip functioned in two ways. The first was as a normal whip, which Buddy also used from time to time as a swingline. The whip’s secondary function was as an energy weapon, its length glowing with crimson energies potent enough to vaporize a Heebie with a single blow. 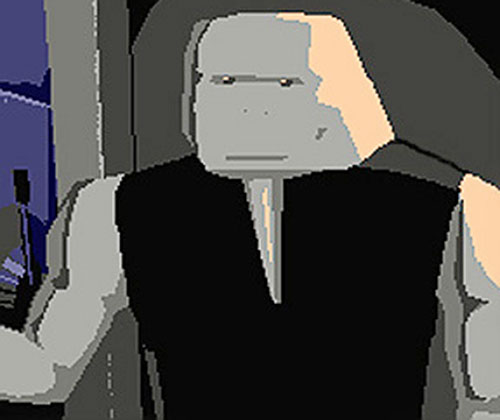 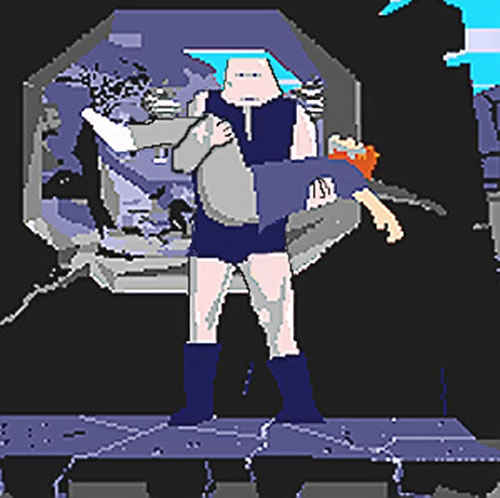