As a result of controlled use of the meta-human steroids, Freak, Buff Bagwell possesses superhuman strength and endurance.

He is a decent, if underwhelming hand-to-hand combatant.

Marcus Alexander Bagwell was raised in the deep south. He developed an interest in body building and personal grooming before he’d even reached his mid-teens.

His use of performance enhancing drugs was considerable even before he finished puberty. He dropped out of high school and lied about his age to work as an exotic dancer at the age of 17 to earn extra cash.

Bagwell began experimenting with metahuman steroids in his early twenties and found a new way to make money. On his off nights at the club, he began a string of robberies under the alias “The Handsome Stranger”. As the Stranger he wore a costume including a silly domino mask, black leather chaps, fake six-guns, etc.).

He managed to avoid capture and eventually moved from robbery to the lower risk crime of drug dealing. As one of the foremost authorities on superhuman performance drugs during the mid-90s, he was quickly recruited by Yakuza boss Giant Baba to coordinate the sales of the designer metahuman steroids “Freak”.

Bagwell worked with Baba’s American emissary, Stan Hansen. Bagwell never met Baba personally, as Baba refused to even speak with him on the phone, finding everything he knew about Bagwell distasteful.

When Buff came up short with payments to Hansen, he went into hiding. His mother Judy told the grizzled Texan enforcer waiting at the door that “Marcus is sick. Can he get you the money when he comes home from the hospital ?”.

Hansen fell for it (Judy Bagwell rolled a 46 on her Persuasion attempt), but Buff never paid. When Hansen finally tracked him down, he nearly took Buff’s head off with “The Lariat”. Hansen got his money for Baba. Buff got a year to recover from a broken neck, but recovered almost fully.

After Baba’s death, Bagwell began distributing Freak coming from South American drug labs. He teamed with Scott Steiner until Sting and Rick Steiner convinced Scott to surrender. Bagwell was arrested and released when his mother posted bail for him.

He then skipped the country. Meanwhile Judy, speaking on his behalf in court, informed the judge that “Marcus couldn’t appear today because of the injuries that he suffered at the hands of that nasty Sting person”. This time, Judy Bagwell rolled a 3 on her Persuasion attempt.

Word got out on the streets about Buff’s “legal strategy”. While he may be on the loose, he’s also a laughing stock.

Bagwell is self-involved and selfish in some profound ways. He makes excuses and whines at the drop of a hat. He is convinced that he is the end-all-and-be-all with regards to physical attractiveness, strength, fighting skill, and intelligence. He complains if expected to do anything that is the least bit unpleasant.

I wish I was running a Suicide Squad game JUST to put this guy on the team and abuse him with Amanda Waller.

By Andrew Lee based on ideas from Jessie Davis. 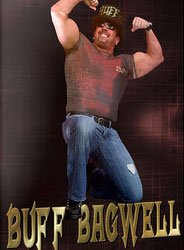