The Buffalo’s enormous strength is another side-effect of the regenerative process which made him big and hairy. He has incredible vitality and endurance. He can be cut – his flesh is no tougher than a normal human’s. But his stamina makes him difficult to put down, but any wounds will heal themselves before too long.

The one physical weakness Buffalo has is poor eyesight. His eyes do not focus well. This is because his eye muscles are so strong that they distort and distend rather then adjust the lens.

The Buffalo’s favorite tactic is to run full speed, headlong into whatever might be in his way. His horns do not rise any higher than the top of his head, and thus cannot impale anyone, leaving him to take full impact upon his skull.

The Buffalo (his real name is classified), was a victim of a well-intentioned Army research project gone wrong. A method was sought to enable severely wounded soldiers to regenerate nerve endings, damaged tissues, and even entire limbs.

Unfortunately, this version of the experiment had a side-effect which had not been seen in test animals. The higher brain functions became drastically impaired within days of the initial treatment.

The quadruple amputee upon whom the process was tested, regained all his limbs. But sadly, he soon went berserk and escaped from a military hospital to rampage through the streets of Chicago. This caused enormous amounts of property damage.

This raging Chicago bull was instead dubbed “The Buffalo” by a witness on the evening news. The name has stuck ever since.

Buffalo is dumb as a box of rocks. The fact that he constantly goes around smashing his head into things doesn’t help that perception either. He’s truly little more than a humanoid animal at this point.

If you’ve ever seen the professional wrestler known as the “The Great Khali” (Dalip Singh), you have a good idea of Buffalo’s appearance. Give him fur, just a slight bit more height & bulk, shorten his hair, and add upward curved horns to the side of his head, and there you go.

His fur is a brownish-orange except for the hair atop his head and a goatee upon his chin. He is essentially naked, but for a pair of red boots and a red sumo-style loincloth that were supplied him by the first supervillain to capture and use him.

He’s just another science experiment gone awry, among many. He might’ve been an early attempt by the Wildebeest society.

The rules as written don’t give strong characters any reason to use the charging attack (as the EV uses the AP’s of movement power only), or even a ramming attack manuever(as their Str is typically higher than their weight).

I realize that most strong characters’ “charging” attacks are basically just flavor text description of them running up & hitting someone, but seeing as how big, strong, hulking types are perhaps the most common users of this tactic in the comics, and there’s still those pesky parts in the manuever description about “running into an opponent”&”using own body as a weapon”, I propose the following:

Use AP math, adding AP’s of movement power or weight, to Str to get an EV of (whichever is highest)+1. They still, of course, run the risk of hurting themselves with the same damage as well. (This shouldn’t overpower the basic manuever for lowered powered characters either)

This way, at no loss to hit, a slim chance at gaining an extra RAP of damage might be worth the possible risk of damage to themselves. For those with high defenses, this could be a useful manuever, which follows the comic books nicely. 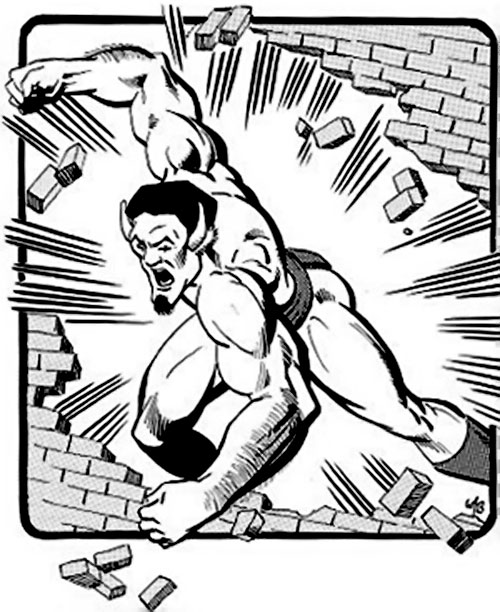