Larvan knows a lot about insects and arachnids. Furthermore, he is an excellent robotics engineer specialising in tiny units patterned after our six- and eight-legged friends. Those are usually remote-controlled from a console with a video screen and numerous switches and levers.

While he never was successful, Larvan is one sharp customer. He’s intelligent, observant, good at strategy, and making quick and efficient decisions. He’s certainly not an absent-minded academic.

Physically the Bug-Eyed Bandit is in decent shape and can throw a punch. But that’s about it.

Circa 1960, the multi-talented Bertram — an entomologist, robotics engineer and inventor — came up with an idea.

Having always struggled financially, he wanted to come up with a killer invention to make a fortune. It occurred to him that a mini-robot able to terminate all sorts of vermin (rats, locusts, boll weevils, mice, etc.) could save billions of dollars and make him rich.

Enthused, Larvan met with numerous bankers with his designs. However, they all wanted to see some sort of working prototype before they’d finance him. Of course, Larvan lacked the funds to build such a prototype. As he kept running into refusals, Larvan grew depressed, then angry and obsessive.

As he tried again and again to build a prototype with very limited means, his fiancée Alice Morse left him. The obsessive Larvan wouldn’t spend time with her anymore.

Eventually cracking, Larvan decided to use a very crude robot insect to steal some money. He would use these funds to build a slightly better robot, and just keep this cycle running. His goal was no longer to secure capital, but to gain revenge against society. At the height of his bitterness, he even made himself a super-villain costume.

I, rule the midnight air, the destroyer

Through a series of mini-robots based on insects and arachnids, Larvan led a discreet crime wave through Ivy Town. He gathered intelligence and stole ever-increasing sums, using robots that became remarkably sophisticated. 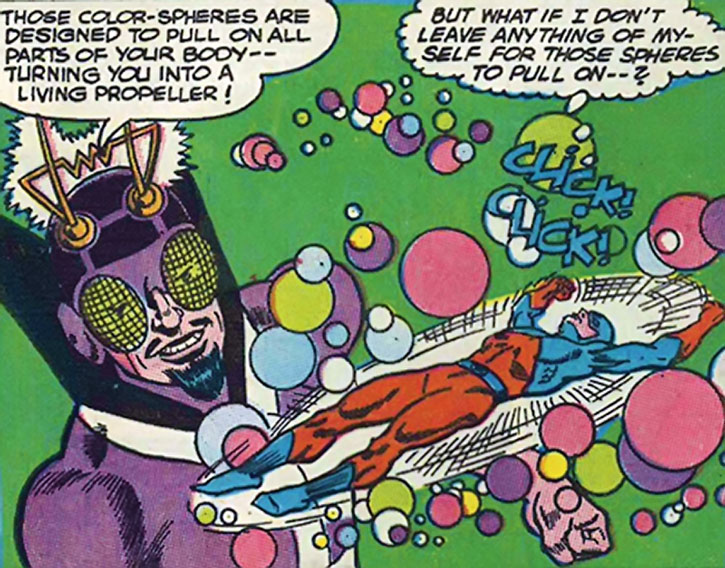 By 1966, Larvan attacked the well-heeled Clifford Rogers with a robot-bug. Not only could it ambush Rogers, but the mini-robot knocked him out using gas, stole his keys, lifted his wallet, dosed him with another gas inducing short-term memory loss, and flew away.

Using the keys and a combination number stored in the wallet, Larvan then stole the payroll of Roger’s company.

The theft attracted the attention of the Atom (Ray Palmer) via the Ivy Town Police Department. A series of clashes ensued. Larvan discovered that the Atom was Ray Palmer after accidentally detecting the energy signature of the Atom’s belt. While spying on Palmer, Larvan erroneously came to the conclusion that Palmer was Alice Morse’s lover. Morse looked strikingly like Jean Loring.

The Atom attacked the Bug-Eyed Bandit in his lab, fighting off his traps. At the conclusion of the fight Larvan was accidentally exposed to a burst of his own amnesia-inducing gas. This also made him forget that Ray Palmer was the Atom.

I, shall soon be there, deadly mass

Larvan spent a year in prison, though he had forgotten everything about his criminal career. He retained his technical talents, and spent his time building remote-controlled toy robots. The prison then gave those to charities for children.

However, an accidental blow to the head brought back every missing memory. As a result, the fuming Larvan decided to use his toy robots to kill Ray Palmer. A flying assassin bug was sent out, and the death of Ray Palmer was announced on the radio.

Using his super-robot, Larvan easily escaped from the penitentiary. He then relaunched his criminal career, soon rounding up enough funds to build sophisticated new robots. These included a centipede, a dragonfly and a grasshopper. However, one of his thieving bugs was attacked by the Atom.

Larvan couldn’t detect the Atom’s energy signature anywhere in town. Puzzled, the Insect Bandit assumed that Palmer had built an Atom miniature robot to carry on after his death. Actually the Atom was in hiding, had distorted his belt’s energy signature, and was working on locating the Bandit’s hidden lab.

Despite all this planning, though, it was Palmer who was captured by the sophisticated robotic insects.

A fight ensued in Larvan’s new lab. The Atom ended up redirecting an electronics-disruption ray (which the Bandit had built to neutralise the hypothetical “Atom Robot”) at the Bandit’s headgear. This triggered a backlash in his cybernetics and rendered him amnesiac just like before.

During the 1970s the Bug-Eyed Bandit recovered a confused, garbled version of his memories. He rebuilt a score of robot bugs, though these were much less sophisticated than before. He remembered the energy signature of the Atom’s belt, though he could not recall who the Atom was.

He sent his bugs out, and they kidnapped Jean Loring. Her wedding ring held a minuscule piece of white dwarf matter like the Atom’s belt did. The Atom intervened in time and easily freed Jean, then took out the befuddled Bug-Eyed Bandit.

Some years later, during the Crisis on Infinite Earths, the Bug-Eyed Bandit was recruited as part of the army of super-villains led by Lex Luthor of Earth-1 and Brainiac. He was spotted briefly as his contingent of villains was defeated by the Metal Men.

During the final onslaught launched against Earth by the Anti-Monitor, the Bug-Eyed Bandit was working with Clayface in Gotham. They were attacked and overwhelmed by shadow demons. Bertram Larvan was killed by the touch of one of these creatures.

Son of the Bug-Eyed Bandit

From a short scene in Adventures of Superman, this man is the son of Betram Larvan. He inherited his robot insects and wants to be a super-villain. He’s been seen in super-villain bars and clandestine pit-fighting events, presumably networking to get jobs.

A contract he took in 2002 was apparently one of his first paid jobs as a super-criminal. However, he ran into Superman. Larvan later joined the Society.

The second Bug-Eyed Bandit apparently knows how to use his father’s robot insects. But that’s all the information we have.

A typical Silver Age criminal scientist, chiefly motivated by profit as his way toward social revenge. Bertram Larvan grew up poor, and is sick to death of his lack of access to capital.

He’s obsessed by his work. What he really wants in life is to be in his Lab and build cool robot insects. As time went by his crimes just became a mean to fund his Lab so he could experiment with even more sophisticated robot bugs.

Perhaps as a side-effect of all the time spent alone, Larvan started getting a bit nuts. He was often talking to his robots, praising them as if they had feelings, etc.. This concerned him.

The Bandit has a huge ego. Thus, he feels insulted by the notion that anything could be as awesome and sophisticated as his creations.

Larvan initially meant well. He wanted to find a way to destroy vermin and thus increase agricultural production. When he captured the Atom,Larvan was interested in using his size-changing secrets to grow plants to giant size and alleviate world hunger.

“Only because of its programming was my banged-up insect able to return to me… From the bug’s condition, it’s obvious the Robot-Atom is a more sophisticated machine than my insect — and this I find intolerable.”

“Where did he go ? My size-changing bug will find him !”

Larvan’s robots look like large, obviously metallic and artificial insects or spiders. They’re about the size of a tarantula.

Below are the base stats of such a robot. Please note that the Shrinking APs are *not* Factored Into the stats – hence the STR, movement, speed, etc. The assumption is that these robots are probably going to threaten characters who themselves have Shrinking at a comparable level, making Shrinking effects irrelevant.

Each Robot will have 2 to 5 Powers loosely based on insects and spiders, such as :

These Powers generally have 6-7 APs. But it was possible to “stack” these APs to some extent to have a specialised robot. For instance a stabber robot just had Claws: 03 and Flight: 07 – both corrected for Shrinking, this time. Between its miniature rocket engine and large spike could kill an adult man, especially when attacking by surprise.

The INT marks that the robot have a crude AI. They can be given instructions (such as “find this energy signature and attack it”) if they cannot be remote-controlled by an operator. Later generations of robots had a better AI – INT 02 WIL 02. Furthermore, they were outfitted with a small voice synthesiser allowing them to report to the Bug-Eyed Bandit.

One generation of robot insects could be disabled simply by crossing their antennae. But that will generally require to be small enough to firmly grab those, and a STR of 03 or more.

A particularly advanced robot insect had the following stats :

This specific robot could reconfigure itself on the fly (he he), for instance to switch from a bug shape to a spider-shape, and manifested insect-themed abilities as needed.

Writeup completed on the 3rd of November, 2011. 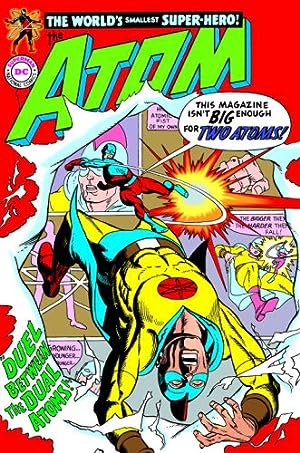 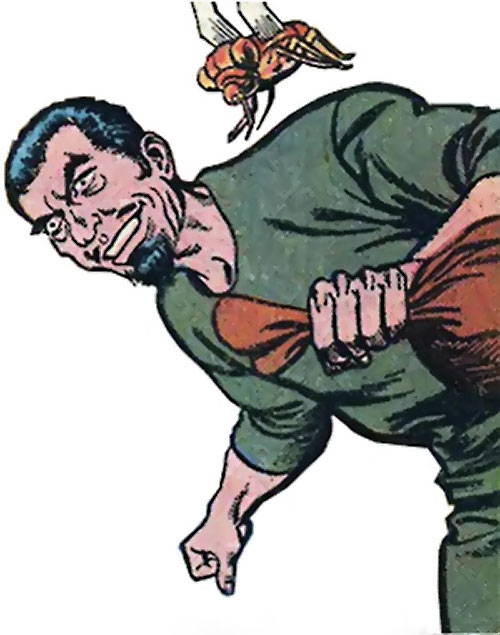 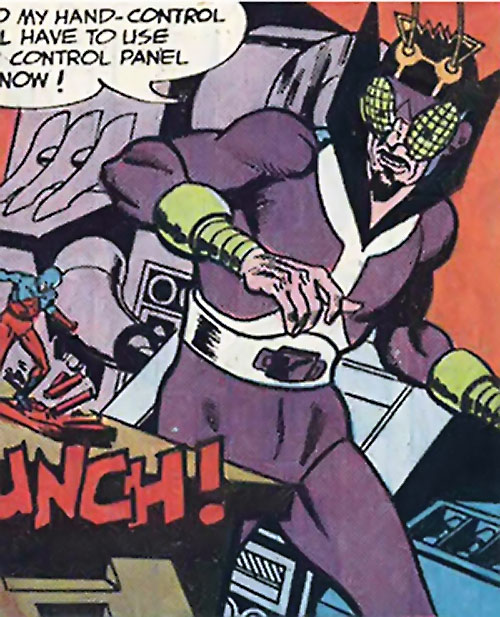 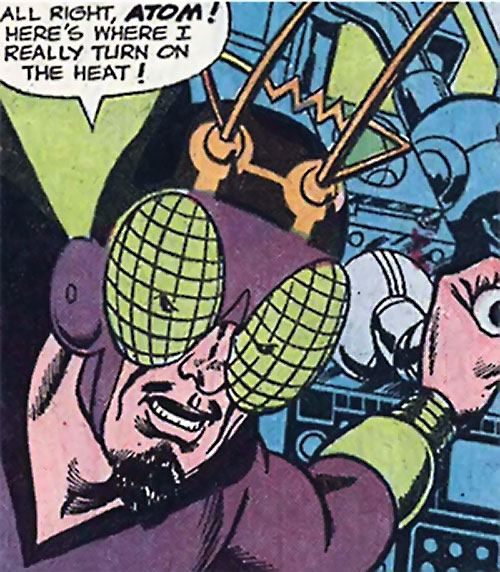