This very minor baddie was seen but a few times in 1988/1989. He’s primarily a Hawkeye opponent, though he could work for other heroes with carnival or circus roots (such as the original Batwoman).

Zarro is a world-class motorbike rider and stunt cyclist, with the athletic capabilities that this implies. He can drive at very high speed in complex conditions – such as speeding through dense traffic or driving inside buildings. He has razor-sharp reflexes and can perform all sorts of stunts with all sorts of motorbikes. 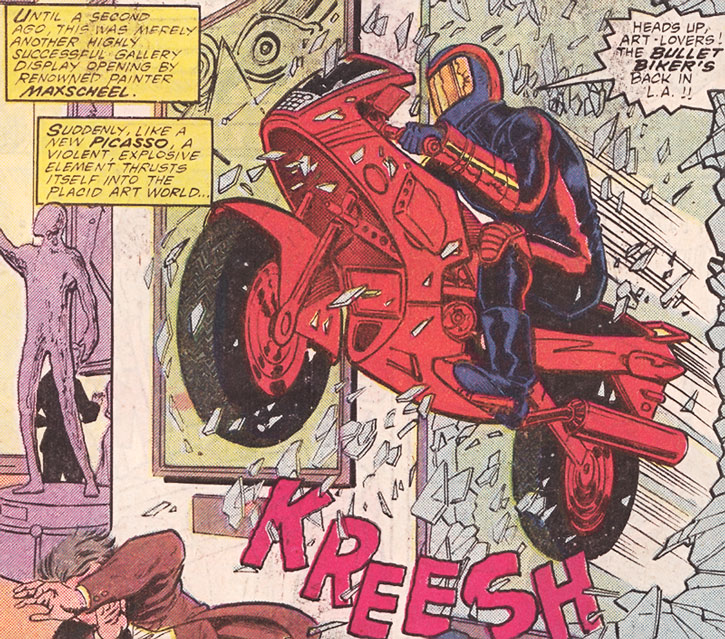 When performing such feats of driving, the Bullet Biker is very hard to hit due to his sheer speed and maneuverability. Even world-class marksman Hawkeye found it nearly impossible to nail the Biker due to his evasive driving. Though admittedly, Hawkeye was shooting in terrible conditions.

Both the Biker and his custom, high-performance supermoto bike are well-armed, and Zarro is an excellent shooter. Between his mobility, his accuracy and using automatic weapons and explosives, the Bullet Biker excels at hit-and-run tactics.

The Biker rides a custom, high performance supermoto motorbike. It is lightweight and agile. It includes four linked grenade launchers mounted in the front (in DC Heroes RPG terms Bomb, Ammo, Range). While those are best not fired at high speeds and cannot really be aimed, it’s great for just blowing up something in front of the bike then drive away.

He wears robust, reinforced biker’s leathers, plus a high-quality motorcycle helmet with a polarised visor. The costume includes several guns on one forearm. This system seems to be a 9mm submachinegun (central barrel) coupled with pellet launchers (left and right barrels). Pellets include knockout gas ones and high explosive ones.

One of the tricks used by the Bullet Biker is a disappearing act. He’ll park his big red van in a small dead-end side street, and when he needs to get away will race toward it. He’ll then suddenly swerve into the small side street, remotely opening the back of the van and crashing into an airbag inside. The back of the van closes while Zarro dismounts and gets to the front of the van.

For pursuers who were too far to see him swerve into the side street, he has vanished into thin air.

Dillon Zarro used to work at a carnival. Carson’s Carnival of Traveling Wonders apparently was a hotbed of incredible talents since Hawkeye, Trick Shot and Swordsman also performed there during their careers.

Zarro was a stunt cyclist. His act was presumably pretty good given the skills he demonstrated. Yet he felt overshadowed by a successful trick shooter, the archer Clint Barton. This was mostly his deep-sated jealousy speaking. Zarro always though that competing acts were more popular than his.

His jealousy eventually led to a life of crime. However, he was not terribly successful as a criminal.

Faster than a speeding arrow

In 1988, Zarro (using the alias of Bullet Biker) landed a lucrative extortion contract. he was to terrorise an art merchant refusing to pay for mob ‘protection’. Using special equipment, the Biker performed very well. But he had the misfortune of running into the super-hero Hawkeye, whom he did not realise was Clint Barton.

Barton chased Zarro using a high-speed skycycle. He eventually forced the Bullet Biker to sacrifice his beloved motorbike to escape. Zarro nearly managed to slip away, but the observant Hawkeye recognised his getaway van and arrested him. 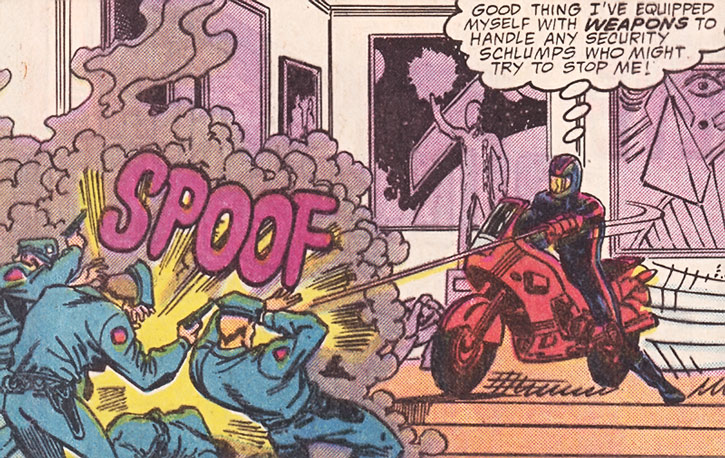 The Bullet Biker spent a few months in prison, but then heard of a large bounty put by Crossfire on Hawkeye’s bow arm. He was among the other Hawkeye foes who responded and tried to kill the archer. But his first attempt failed – though he got lucky and deprived Hawkeye of his bow.

Most of the mercenaries chasing Hawkeye eventually cornered him in the sewers. In Crossfire’s presence, attacked en masse. Sewers are not the best environment to ride a motorbike in, though, and Hawkeye easily knocked out the Bullet Biker.

Zarro hasn’t been seen since.

Bullet Biker appears to be a leftie.

The Biker is pretty competent, at least when he’s in his element. That is, on his bike and employing hit-and-run and chase tactics. He then makes smart choices, uses appropriate and occasionally creative tactics, has a good répertoire of tricks, reacts very quickly, and so on. Being motorised makes him prone to spout trash talk and insults.

Thus, presumably, it is the rest of his choices that must not be so great. He was obviously bitter and jealous, always thinking that other people unfairly had it better than himself. This is a pretty good attitude to have when it comes to making bad decisions. He wants to be the best and most celebrated or nothing. And what he tends to get is being nothing.

“Nice try, but I can stop on a dime and make you eat nine cents change, stiff !”

“Hope you play catch better than you shoot arrows, bozo !” 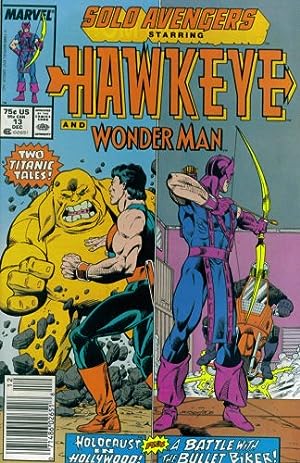 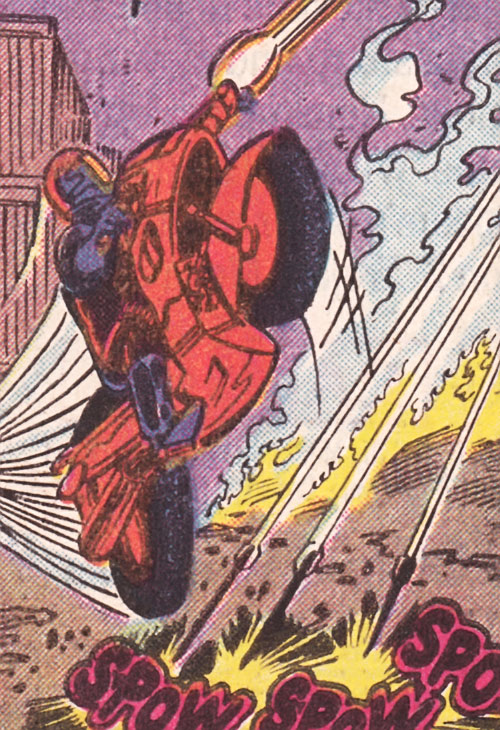 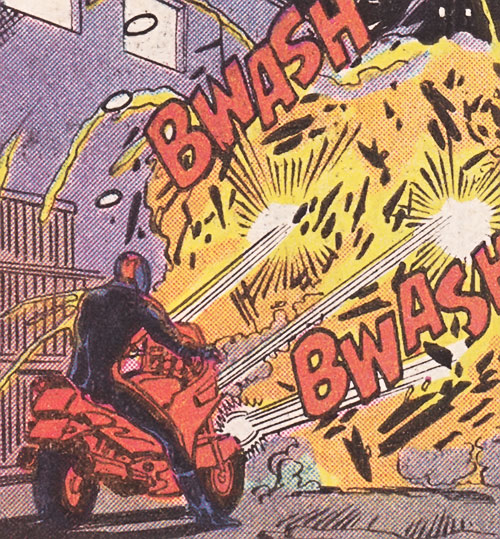 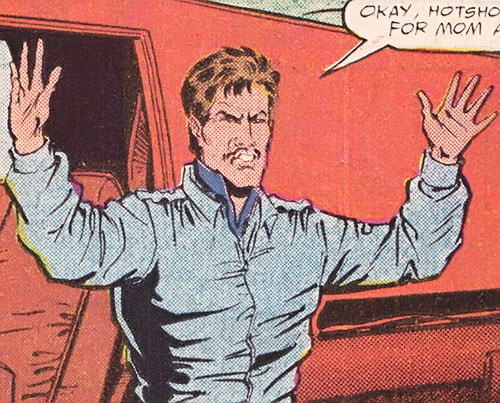