Bullet is a highly experienced black ops agent, particularly in sanctioning and intimidation.

His main physical asset is being a gigantic fighter, tall and built like a boulder.

Furthermore, Bullet is a fast, highly skilled hand-to-hand combatant who possesses superhuman strength. He can easily :

Bullet’s deadliest attack is to charge and body-slam using his great speed, strength and mass. When throwing himself at something, he can demolish most obstacles.

Bullet seemed to be somehow immune to toxic waste – and presumably other toxins and pathogens. His son Lance apparently inherited this resilience, so it might be some sort of mutant ability.

During his 2010 appearance, Bullet had a sort of large bracer with multiple barrels. It presumably fired 12-gauge buckshot.

He was also formally stated to have superhuman strength, endurance and durability.

Bullet has suffered from a bad case of supervillain decay . He quickly became depicted as far less formidable than he was in his original appearance, and it’s been a while since he posed much of a threat.

Bullet appears to work for some sort of intelligence service. Perhaps military intelligence, but this is murky. He apparently has had a long and bloody career in this capacity.

Bullet has a son called Lance. Aged about eight, Lance lives alone in a huge flat in New York City. Although Bullet loves his son and visits him often, he refuses to live with him. This may be because of a court decision. Or because of Bullet’s frightful temper and superhuman strength.

Little is known about Lance’s mother, Gloria. She seems to be shallow and only interested in her own satisfaction, seldom seeing her son and never keeping her promises.

Lance is a weird dork of a kid. Living alone at his age has made him eccentric and fanciful. Bullet doesn’t understand what his son is talking about, most of the time.

During the 1980s, Lance developed a phobia of nuclear war and stocked tons of supplies (including firearms) in his flat in order to survive the incoming annihilation.

His fear of the Bomb was an expression of his fear toward his father who, like nuclear war, could explode at any moment, for any stupid reason, and devastate everything.

In 1988, agent Bullet was contacted by a US armed forces general. Bullet was to conduct a black op benefiting Kelco, a chemicals company.

Part one of the plan was having a false-flag terrorist in the general’s employ blow up the headquarters of an ecological organisation, where all their legal archives were stored. Part two had Bullet arrest the “terrorist‘ and hand them over to a friendly Federal agency before the local cops could mess the plan up.

Everything went fine, despite some brief interference from blind lawyer Matthew Murdock. Murdock was representing a kid blinded by Kelco chemical wastes.

The actual paymaster of the operation was the Kingpin (Wilson Fisk). He wanted to mess with Murdock and damage his faith in the system.

As a third phase, Fisk has the general plant a corpse and a barrel of toxic chemicals. This make it look as if the eco-terrorists had killed a man to send a message.

Bullet took his kid to a seedy pool hall, and ran into Murdock again. However, Bullet had Lance lie. This provided him with an alibi for the night where the corpse in the wastes barrel had been planted. Murdock took a billiard ball to have Bullet’s fingerprints checked but the agent charged him, took the ball and crushed it to powder in his palm.

Bullet let himself be arrested by the police. He was freed with but a phone call, angering Murdock as the Kingpin had hoped.

When X-Factor’s Ship came back to New York, triggering a days-long blackout evoking a nuclear war, Bullet was at Lance’s place. While Lance was ranting about nukes, Bullet went outside to check things out, leaving Lance alone.

Shortly after that episode, Bullet got fed up with international jobs and government work. He switched to local mercenary contracts.&empsWhether he retained his government contacts and protections is unknown.

Six months later, Typhoid Mary dropped by Lance’s place, chatting a bit with the kid before his father came in. Bullet reacted violently at first. Bullet instantly crumbled when Typhoid levitated a bayonet in front of his son’s face. When she told him she wanted to hire him to flatten Daredevil, he took her offer. Bullet even asked her to stay a bit to try to flirt with her.

Typhoid organized a gauntlet of villains to beat up Daredevil. Bullet was the very first wave, landing several mean punches on Daredevil before he was outmanoeuvred. Subsequent waves were Ammo, the Wild Boys, and Bushwhacker.

Chased by the Devil

After the destruction of his home and the loss of Karen Page, Daredevil was unable to cope and sunk into a severe depression. He went to Lance’s home so he could wait for Bullet then kill him.

But Matt found himself connecting with the nine-year old. Lance told him how he was ridiculed by other kids for wearing a gas mask at school, and how he was stockpiling gear and supplies so he would not die in the war.

Daredevil told Lance that he no longer wanted to kill his father. Hornhead was wondering about what Lance really wanted to protect himself from when Bullet arrived. The giant immediately rushed Daredevil to protect his son. But Lance broke the fight by saying that it was OK for Daredevil to be here as he was his friend.

Daredevil and Bullet later clashed while Bullet was acting as a legbreaker. The mercenary had ended up in possession of a document that could be instrumental in winning a case of real estate management malfeasance.

Bullet was briefly seen several times since. Those were all very minor appearances as a stock goon.

In 2010, he and other killers were hired by the Assasin’s Guild of New Orleans to kill Wolverine and Domino (Neena Thurman). However, X-Force unexpectedly intervened and Bullet was stabbed in the shoulder by James Proudstar.

Even when not in costume, Bullet dresses mostly in black – usually a solid black suit and shoes, and a white sweater.

He smokes French cigarettes and drinks a large amount of beer.

Bullet seems to be bipolar.

Normally he’s a cold, ruthless, strictly professional special agent. He does terrible things without caring about them, and seems reputed for accepting to do illegal stuff no other agent would touch. However, from time to time, he switches to his “bad mood”, where he has a practically inhuman temper and is a menace even to his son.

Outside of his bad moods, he doesn’t really seems interested in violence. If he can’t put somebody down quickly enough, he simply grows bored. In such cases he is likely to just leave unless he’s paid to win.

Bullet doesn’t give a flying fudge about what happens when he’s on a mission. His first tendency is to eliminate witnesses, but if that is clearly unnecessary he will just shrug and move on.

He acts with cold authority and, unless it’s a complete black op, will tersely identify himself as “agent Bullet”, making it clear hat he has the highest possible clearances, the broadest authorizations, and is deadly serious.

Bullet seems alienated, and has a misanthropic and paranoid outlook. He seems to think humanity would be better off dead, or at least severely purged. Yet he always tells his kid that he’s a good guy and defends the USA against all sorts of evil criminals and terrorist conspiracies.

Bullet has no idea of how to raise a child. He will do things like taking him with him to play pool at seedy bars, teach him to shoot or teach him close combat. Since that’s all what Bullet knows how to do.

Bullet seems to think his government ties make him untouchable. Thus, he doesn’t really bother covering his tracks. He’s mostly right – and the people tasked with investigating his misdeeds are colleagues anyway. He has no problem getting arrested, and is even insulting toward non-Federal cops when they do so.

This might have changed since he no longer seems to be with the government. But then there are old boys’ networks, and it’s always useful to retain ties with a stone cold killer such as Bullet.

“I don’t need to be bothered with your morality play justifications. How you manage to sleep at night is your business. Let’s get one thing straight, Mr. four-star general ; I’ll do anything long as the money is right. I sleep like a baby. No matter what.”

“Uh… Lance, aren’t you carrying this fallout shelter stuff too far ? You got lots of normal games to play….”

(Sarcastically) “I like to think of all deaths as life-affirming acts. One less body to consume and pollute the planet. Think I’ll wash all this down with a beer.”

“Listen, mister Z, don’t take this personally. I’m just a working stiff like any other. Just like you.”

“Television’s a sleazy racket ! They make up all that bad news to keep everybody scared and paranoid so people’ll be grateful for the wimpy police force… then they toss us one of these lame stories about people helping each other, like they’re throwing us a chewed bone…. More bull. Nobody helps anybody in this world.”

Note:
Bullet may now have lost his Clearance and the associated Connection.

Equipment:
During his 2010 appearance, Bullet had a sort of large bracer with multiple barrels – presumably firing 12-gauge buckshot. Likely stats for this are [BODY 04, Shotgun blast (Range 03): 06, Ammo: 06].

Bullet’s performance sharply declined over time. He quickly became much less of a menace.

In his very first appearance, Bullet was at his best – tougher and sharper than in subsequent portrayals. His DEX was a 07, his INT a 06 and he had 25 Hero Points. The rest was as in the main stats block.

By his next encounter with Daredevil, at the pool club, those had faded and he had the stats in the main stats block.

After that, and up to the present time, Bullet is portrayed has a legbraker and thug and has noticeably lost his edge. DEX drops to 04, BODY to 06 and his HPs to 015. His STR may also be slightly lower, to 07.

Depending on how much of a menace one wants Bullet to be, use the most appropriate set of stats.

The No-Prize is in the chamber

One hypothesis to account for this variation (a No-Prize explanation ) is that he’s clinically bipolar, and his behaviour strongly implies.

His declining adeptness could thus quite simply be explained by whether he’s in a manic phase or a depressive one. And/or possibly by the effect of the mood stabilisers he might be taking.

And of course this No-Prize explanation allows GMs to feature Bullet in full fighting form whenever needed. 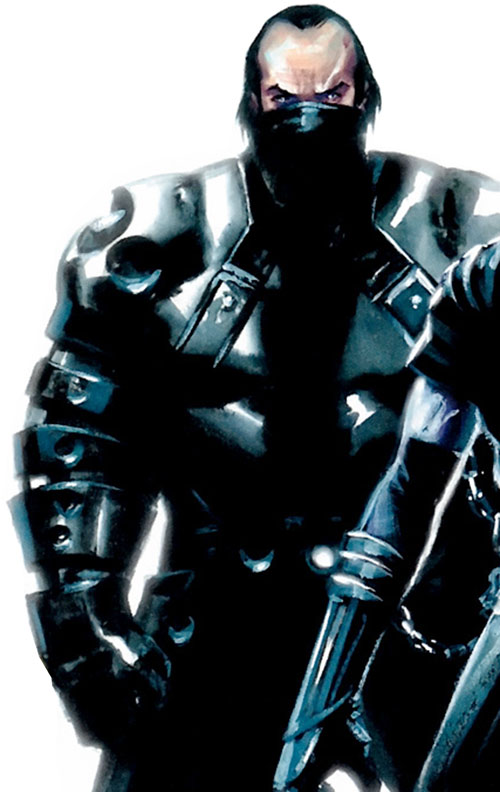 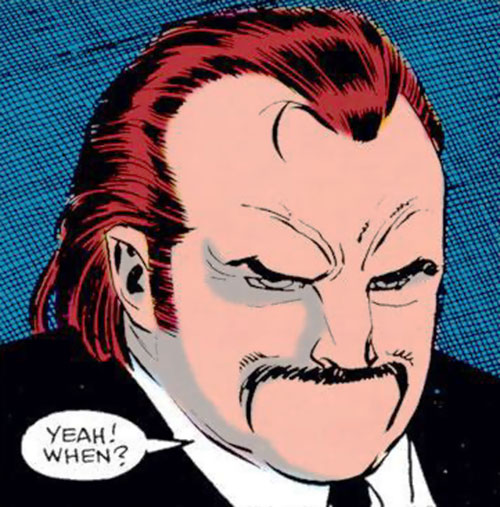 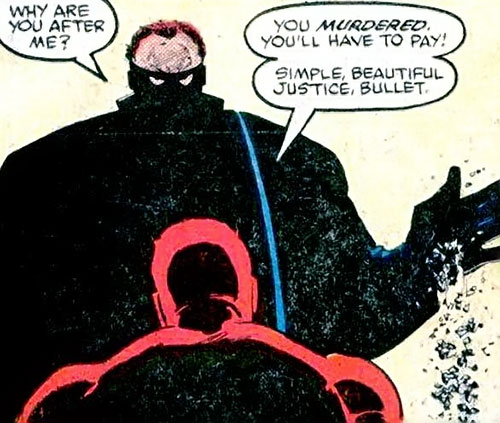 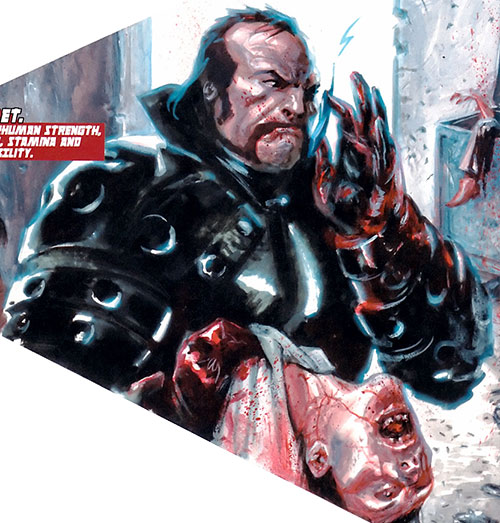 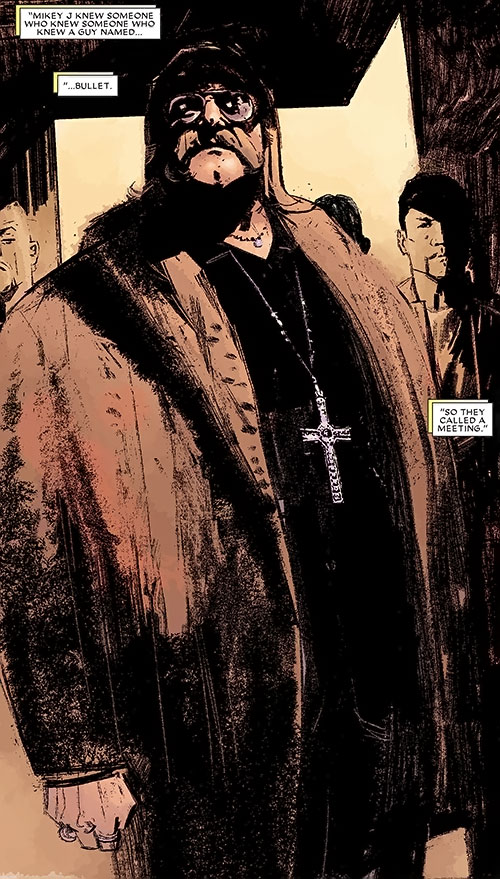 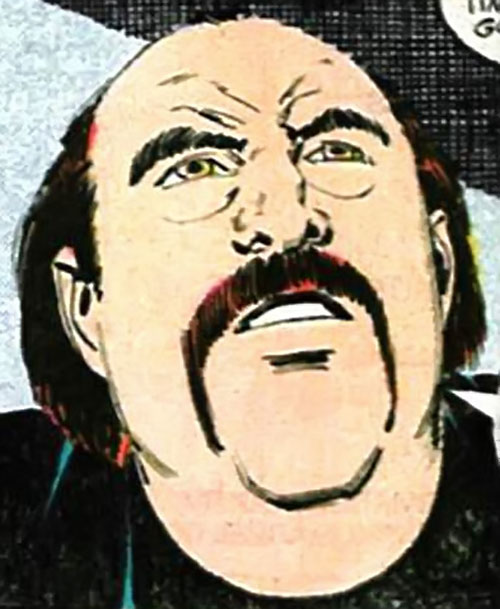