Mrs. Harrower’s skin and muscles have been infused with a metallic-looking compound called smartskin. This gives her superhuman strength and durability. Her bones and most organs are unaltered, though.

She is also a trained educator for handicapped children, particularly autistic ones. But beyond that her skills and life experience are thoroughly unremarkable.

In later appearances, a continuity error (presumably confusing her with Bulletgirl and her flight helmet) results in Mrs. Harrower having the power of flight. There is a chance that this mistake might stick. If so one imagines that her top speed would be about Mach 2.5, like a typical rifle bullet.

Anecdotically, Alix owns a mouse covered in smartskin, called Metal Mickey. Albeit it is super-strong and durable, it is otherwise just a pet rodent.

The spear that never was thrown

The Bulleteer is a direct descendent of the first superhero, the prehistoric Aurakles. This gives her mystical properties, as this bloodline is also a metaphor for Aurakles’ spear. His descendants are likened to a weapon hurled into the future to strike his enemies.

More practically, if a descendant of Aurakles encounters one of his enemies, there will likely be strange coincidences and subtle magic afoot. These allow them to strike at their atavistic foe in ways that cannot be defended against.

In the Bulleteer’s case, she wasn’t aware of her role, or of the presence of an enemy, and did not want to hit anybody. Fate just arranged for her to be the unwitting Spear of Aurakles, thrown thousands of years ago with pinpoint precision.

Alix wanted a nice, ordinary life where she could care for people. In college (where she presumably did a BA in psychology) she married her paramour Lance, who was presumably doing a PhD in biochemistry. After graduation she found a job as a teacher and caregiver for autistic children.

Like many, Lance had an obsession about superhumans – the power, the mythology, the beautiful hard bodies, the glory, the eternal youth. He relentlessly worked on an invention of his, “smartskin”. He wanted smartskin to turn himself and his wife into indestructible, glamourous, airburshed, idealised chrome people.

In his mind they would pattern themselves after the classic heroes Bulletman and Bulletgirl and be eternally young and perfect. Mr. Harrower gave super-powers to a test mouse using smartskin. But he couldn’t find a way to apply it to a human-sized organism.

Alix found the idea awful and disturbing, in part due to the implications that she was something of a trophy wife for Lance. She did her best to ignore smartskin research.

Ironically, the exceptionally attractive Alix was herself as close to the superheroine body type as a normal person could be. But her husband endlessly craved more.

One night, a smartskin batch produced perfect results. In his basement lab/den, Lance decided that he wanted to be a superman right now. He impulsively injected himself with the smartskin. Not fully tested, the metallic-looking covering started suffocating him.

Hearing the commotion, Alix rushed in and called 911, but contact with her husband meant that the smartskin also covered her.

The Harrowers were rushed to the hospital, joining the endless flow of fools trying some weird thing to give themselves super-powers. Lance died of asphyxiation, but the ER doctors found a way to save Alix – the smartskin hadn’t covered the skin under her wedding ring, and they could use that to perform medical injections.

Upon release, Alix found herself looking like a living chrome statue. Her exceptional body was now gleaming and preserved from reality. She was completely lost. Working with children was now impossible, she had no idea what to do without her husband, and she could no longer afford the rent.

Furthermore, she stumbled upon Lance’s web browser history and chat logs, plus various e-mails where Lance mused about Alix no longer being beautiful in ten years.

The distraught widow made a vague attempt at suicide. But throwing herself against the wall just led to bursting through. While disoriented and crying, she stumbled upon a train crash. Ms. Harrower reflexively went in to carry trapped passengers to safety, though she refused to be called a super-heroine.

Having few options left, Alix started using the Bulleteer costume and code-name that her husband had prepared for her. She looked for some sort of job offer for super-heroes. She thus answered a classified posted by aged hero the Vigilante (Greg Saunders), who was assembling a posse in Arizona. However, she got cold feet and didn’t board her flight to go to the interview.

This anxiety saved her life. The entire posse was found dead a few days later. The FBI deemed her an indirect witness to the killing, and Alix was interviewed by a Bureau specialist, Agent Helen Helligan.

The brilliant Agent Helligan rapidly pieced together the case. She established a connection with a Silver Age villain called the Hand. She convinced Harrower to play a small role in interrogating him, but Alix soon returned to finding ways to pay the rent. She took in a lodger and did a security gig, escorting a cinema starlet (a mermaid called Ms. Stellamaris) at a super-hero convention.

Mrs. Harrower also used her time on the super-hero convention circuit to try to understand the super-porn business and who Sally Sonic was. She was seeking closure about her husband.

She shouldn’t have bothered, though. The psychologically damaged Sally Sonic was stalking her, and was actually her new lodger. When Alix returned from the convention, Sally ambushed her to kill her.

Overwhelmed for lack of fighting experience, Mrs. Harrower nevertheless proved too durable for even Sally Sonic. She won the brawl. After a burst of uncharacteristic rage, Alix regained her composure. She called 911 to get Sonic to an hospital.

But unbeknownst to her, ambulances were in short supply. The Harrowing had started in Manhattan.

Harrowings are an event occurring every few millennia. A force called the Sheeda comes to loot and devastate the world. This leaves mankind to rebuild from dismal chaos and misery.

Humanity’s first super-hero, the prehistoric Aurakles, was prophesied to end this. It was stated that he would kill the ruler of the Sheeda, the Queen of Terror. The cryptic account was that Aurakles had thrown his spear far into the future to strike a killing blow. The spear in question was a metaphor, referring to his descendants and to magically engineered fate.

Thus, a long series of perfect coincidences called the Spell of Seven had been at work for several days. In the metaphor of the Spell, the unsuspecting Alix — a direct descendant of Aurakles — was the spearhead. The actions of six other unwitting agents had engineered an excruciatingly precise circumstance where the spear would strike.

Heroic super-caveman strikes into the far future of the present

Since no ambulance could be spared, Alix drove Sally to a hospital herself. But Sally Sonic regained consciousness. She tried to wrestle the wheel away from Mrs. Harrower, which sent the motorcar out of control.

The car ran into a destroyed part of the street (caused by a minor adventure of Klarion the Witch Boy), vaulted, and crashed right into the Queen of Terror. She was stumbling wounded in this street due to a lengthy chain of events.

Magnified by the power of Aurakles, the impact killed the Queen. Sally was accidentally killed by the crash, though the Spear of Aurakles herself — Alix Harrower — was unscathed.

The police briefly interrogated Alix and let her go. But Mrs. Harrower seemed to have sensed that some greater force had been at work in her life.

What happened next is undocumented. After her exposure to the ultra-violent, surreal nightmare of super-heroics Alix was more determined than ever to steer clear of it. However, she was still interested in helping people. One may imagine that she became a firefighter or paramedic.

Perhaps out of a sense of guilt for letting her powers go unused, the Bulleteer was occasionally spotted when large super-heroic forces were assembled during world-threatening crisis.

Alix also made a well-meaning but weak attempt at joining a new Justice League. That was when C-listers tried to resurrect the team under Firestorm’s hesitant leadership. It failed miserably and the Bulleteer had little choice but to walk out.

But she still retains some minor access codes from this experience, and could be loosely considered a JLA reservist.

Even before smartskin, Alix was an ideal woman by US super-hero comic books standards, with impressive curves.

The book being in part a metaphor about the image of women in super-hero comic books, Alix was frequently depicted in glamour photography situations. Such as unconsciously adopting sexy poses or lounging around her house in high-end lingerie.

Alix is a somewhat naïve, somewhat sheltered 27-year old who still comes across a bit like a college student. She is a very nice, well-adjusted and helpful person, and doesn’t have anything resembling a killer instinct or anger issues. Her intelligence is noticeably above average.

Mrs. Harrower is a very feminine woman. She has essentially all the Nice Girl character traits.

Thus, she is sensible and grounded, vanilla tastes in just about everything, even-tempered, not particularly ambitious or curious, kind and nurturing, heavily invested in her marriage and in her social life, avoiding violence and conflict, slightly submissive toward her husband and not financially autonomous, loving children, not knowing much about things that are traditionally a male bailiwick, etc.

She didn’t want to be special or experience the rougher sides of the world, just have a nice and fulfilling life. But her need for closure after her husband’s death led her to enter the world of super-heroes.

Yet she tried to handle it by talking and acting in a sensible and civilised manner – for instance by taking her supposed arch-enemy to the hospital.

In many ways Alix Harrower is the polar opposite of the Whip (Shelly Gaynor), who was fascinated by the world of the “super-cowboys” and wanted in. The Bulleteer doesn’t want to be a super-hero, because it’s an awful life that makes no sense.

“I don’t want to preserve my body under smartskin. Lance, what’s all this about ? We barely have a social life anymore. Aren’t normal people good enough for you ?”

“I can’t pay my rent. I’m completely on my own. Suddenly it’s like you’re standing there and you don’t know who or what you are anymore. I work with autistic children and… they… they thought I’d been replaced by a robot. Have you any idea what it’s like explaining to people that you’re not a robot ? A freak…”

(Feeling miserable from the adrenaline crash and awkwardly covering her chest after rescuing people from a burning wreck) “Superhero ? Me ? I’m not a superhero.”

“I thought I wanted to meet people who were like me and then… and then that was like the last thing I wanted.”

“Supervillains, werewolves, time travel, vampires, ghosts. Coincidence, plot and counterplot : I felt like Alice through the looking glass. [Helligan] was right : once you were in, you were in over your head.”

“What is it with everyone here ? Why are you all so obsessed with being special ?”

(Calling 911 after a fight) “Hello ? Yes, I’m a super-hero but I have no idea what I’m supposed to do about this other superperson… the one I told you about who just attacked me… My arm is broken and I think she might need specialist medical care…”

“And the fact I can no longer tell the difference between paranoid schizophrenia and the day-to-day realities of life as a costumed crimefighter count me out of any special destiny you care to come up with. My guess is you’re a shock-induced hallucination, but I’ll tell you this anyway. I quit.”

“I’ve tried really hard to make this work. I’ve tried to use my so-called powers for good. But I don’t want anything more to do with this twisted, horrible world !” 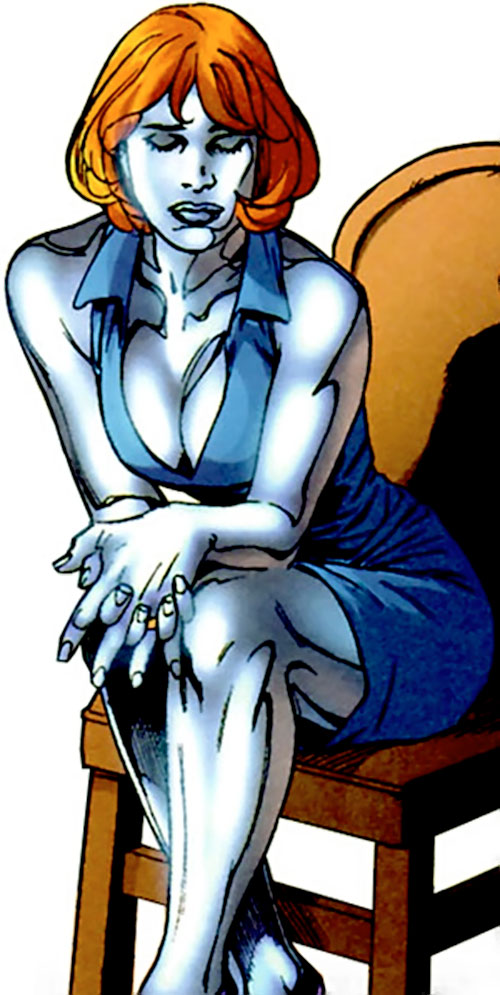