Bulletgirl just flies around, stopping crooks. When crooks try to shoot her, they can’t hurt her because she’s *Bullet*Girl… and the bullets are magnetically attracted to her helmet.

Bulletgirl met and fell in love with Jim Barr alias Bulletman. He made a spare helmet for her, and they began to adventure together. The source of her strength is unknown.

According to “Sockamagee!” and “Rocco Morocco” on the Golden Age Message Board, “Bulletgirl only got a duplicate of the helmet. But I think she may have been portrayed in the stories as being pretty much the equal of Bulletman in terms of strength and intelligence…

Both were portrayed as being powerful enough to smash through cavern walls in their very early adventures. Yet by the late 1940s both were essentially — and only — ’flying detectives.‘”

She wears a red short-sleeved shirt with a collar and a plunging neckline, yellow briefs, blue gloves, belt, and boots, as well as a bullet-shaped metal helmet.

Typical Golden Age  nice girl hero. Sometimes Bulletman relies too much on intellect, requiring Bulletgirl to give him the less rational clues to solving an adventure, much like a more amicable Spock and Bones team.

She also gets to play the role of companion to the intelligent hero. That is, she’s the one that Bulletman can explain things to, so that the reader finds out what’s going on.

“Oh ! You and your stodgy old science ! I want more action and less thinking !”

Equipment:
GRAVITY REGULATOR HELMET [BODY 10, Magnetic Control: 10, Flight: 09, Limitation: Magnetic Control can typically only be used to add to OV against metallic weapons (such as bullets), but has occasionally been used for other effects. For example, in Crisis on Earth-S, Bulletman disarms the Shade at a distance. In a Golden Age story, he shorts out a trolley by hurling his helmet at the electric cable.].

Jinx
This Drawback works just like Unluck. Except the recipient of the Unluck is one of the Jinx’s companions, *not* the Jinx himself.

The effect may be obvious or subtle. That is, bad luck might just occur, or it might be a result of the Jinx’s clumsiness that the Jinx’s companion is stymied. Gilligan of Gilligan’s Island has this Drawback.

Why is Bulletgirl a Jinx ? Well, in one story, she is attacking crooks by throwing billiard balls at them. Unfortunately, she misses and clobbers Bulletman by mistake. She comments that she forgot that the helmets only protect against metal weapons. Then, later, she spots a mouse, which causes her to be frightened, so she bumps into Bulletman, which enables a crook to escape. 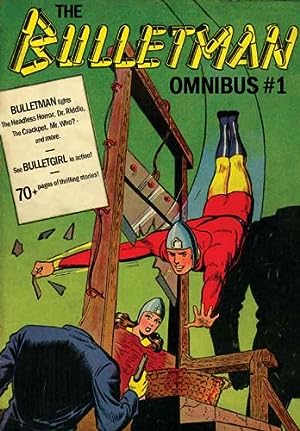