Bulletman just flies around, stopping crooks. When crooks try to shoot him, they can’t hurt him because he’s *Bullet*Man… and the bullets are magnetically attracted to his helmet.

(from http://shazam.imginc.com/album/fawcett.asp – long since defunct)
Jim Barr was a frail police chemist. He invented a drug that built-up his physical appearance and gave him super-strength and intellect. Using his now formidable mind, Jim then creates an anti-gravity device called the Gravity Regulator Helmet.

Wishing to strike terror into the hearts of evil-doers everywhere, Jim fashions a uniform for himself and donning his newly-invented helmet becomes Bulletman!

(from http://www.geocities.com/Hollywood/Set/2972/Bulletman_Bio.htm – long since defunct)
James Barr is the son of a Fawcett City police sergeant. Jim’s mother died early in Jim’s life. When his father was gunned down by gangsters, the young orphan dedicated himself to the war on crime.

Jim began studying chemistry in the hope of finding a “crime cure”, a medicine that would remove the poisons that drove men to committing crime. He submitted himself to the drug he hoped to use for his “crime cure”.

When he awoke the next morning the chemicals had taken effect. Jim was no longer a 97-pound weakling. He had gained 60 pounds of muscle and grown from five eight to six four. Then he found that not only had the chemical given him super-strength, it had also increased his brain power.

Fortunately no one had ever really taken notice of Jim before. So when he returned to his work at the police laboratory the change went unnoticed. Soon afterwards, Jim created a bulletshaped Gravity Regulator Helmet that gave him the power of flight. Donning a red and yellow costume Jim Barr took up the fight against crime as Bulletman.

(from “The Golden Age Review”)
“Throughout his long career, Bulletman fought some of the most hideous villains in comicdom. They included such grotesque figures as the Black Rat, the Weeper, Dr. Riddle, the Headless Horror, the Black Spider, and… the Gorgon.”

(Addendum)
Bulletman’s secret identity was soon found out by Susan Kent, who joined him as Bulletgirl. At some future date (post-Crisis), they were married.

During the Golden Age, Bulletman was also briefly joined by Bulletboy and Bulletdog, about whom I have little information. Bulletboy wore a costume similar to Bulletman’s (but with short sleeves and short pants) and that Bulletdog wore an anti-gravity collar (and not a helmet, because that would be silly).

He wears a red long-sleeved shirt, red briefs, yellow tights, blue boots, and a bullet-shaped metal helmet. He has yellow bracelets and a red shield/badge shape on his chest. He also had a less well-known short-sleeved version of his costume.

Typical Golden Age nice guy hero. Sometimes he relies too much on intellect, requiring Bulletgirl to give him the less rational clues to solving an adventure, much like a more amicable Spock and Bones team.

“Captain Nazi challenges Bulletman, eh ? Then there’s only one thing left to do ! Bulletman accepts the challenge !”

Drawbacks:
Secret Identity (Note: in his case, being married is not the DCHRPG Drawback “Married”.)

Equipment:
GRAVITY REGULATOR HELMET [BODY 10, Magnetic Control: 10, Flight: 09. Limitation: Magnetic Control can typically only be used to add to OV against metallic weapons (such as bullets), but has occasionally been used for other effects. For example, in Crisis on Earth-S, he disarms the Shade at a distance. In a Golden Age story, he shorts out a trolley by hurling his helmet at the electric cable].
In his early appearances in Nickel Comics, Bulletman’s helmet seems to lack the Magnetic Control power altogether. For example, in Nickel Comics #6, he surrenders to a member of the Blue Devil gang when the gang member pulls on a gun on him. Bulletman says, “Okay. I can’t dodge bullets. Now what ?” 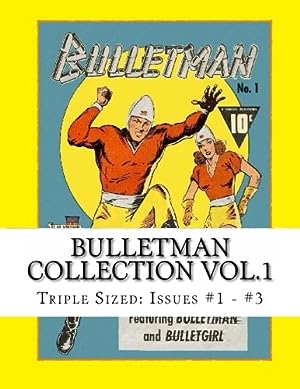