Bulletproof is a flying brick . He can fly at great speeds, has a high degree of resistance to physical harm and limited superhuman strength.

Though he has never had an exact measurement taken of his abilities. But he has displayed sufficient strength to easily lift a sedan, and has been described as being nearly as fast and invulnerable as Omni-man.

Despite this, it is clear that he is not anywhere near Viltrumite levels of physical power.

The origins of Zandale Randolph’s (aka Bulletproof) powers are unknown at this time. All that is known is that while he possessed his gifts for quite some time before his debut, Zandale had only flirted with the idea of becoming a costumed hero. This changed when one of his friends inherited the Jade Gem and the mantle of the “Green Ghost”.

The Ghost’s inexperience got him into a situation that was more than he could handle on his own. When Zandale bailed the Ghost out, he got a taste of the super-heroic lifestyle. Once bitten with the bug, Zandale couldn’t ignore the thrill of using his powers to help people. Thus, he embarked on a journey to become a costumed hero.

Zandale sought out Art the Tailor (a talented costume manufacturer the local heroes used). After establishing his pedigree, he received a unique costume from the tailor. The lad then set out to fight any menace that crossed his path as Bulletproof.

Zandale made his costumed debut during the recruiting drive for the second iteration of the Guardians of the Globe. That was a result of he original team having been slain by Omni-man. But he was initially passed up for Guardians membership. This was due to Robot’s desire to have a team made up of members with diverse abilities that complimented one another. 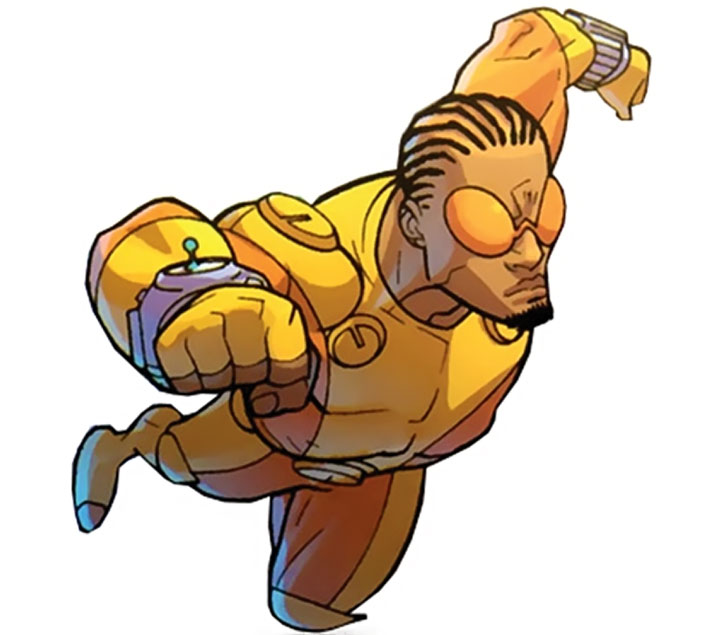 The rejection proved to be temporary, as the team proved to be ineffective over time. In a bold move Cecil Stedman, the Guardians’ government liaison, added Bulletproof to the team in order to give them the boost in power that he felt they needed. Bulletproof’s strength and conviction quickly earned him a measure of respect with the team, while his charm earned him their friendship.

He participated in several adventures with the Guardians. They strung together a series of victories over both major and minor foes until the day he encountered Battle Beast.

Several months into his tenure as a Guardian, Bulletproof was amongst the heroes that were dispatched to rescue Invincible. Invincible had walked into an ambush that was laid by the crime-lord Machine Head. During the rescue, Bulletproof (along with his teammate Black Samson) was singled out and attacked the leonine warrior known only as Battle Beast.

The fight proved to be as short as it was one-sided. Battle Beast, who had laid low Invincible immediately before being attacked by the Guardians, severely maimed the two Guardians in seconds. Samson was left comatose for months. Bulletproof had to be hospitalized for weeks while he recovered from the beating he received. 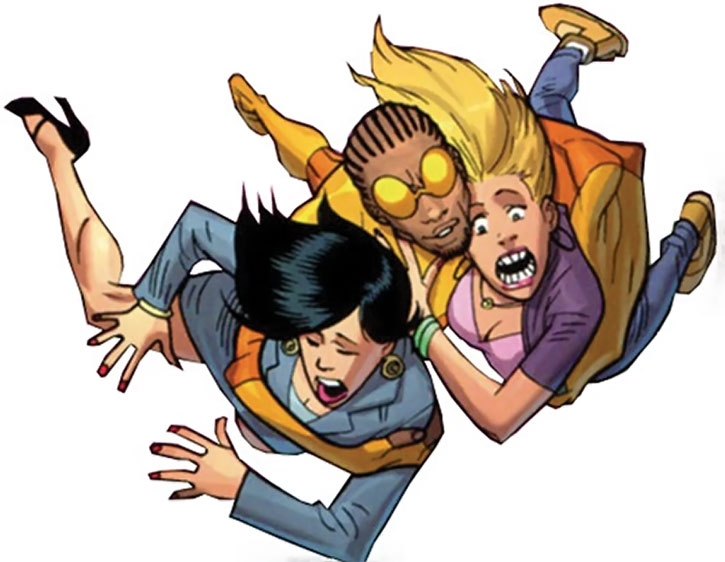 When his health improved, Bulletproof eventually returned to active duty alongside the rest of the Guardians. He found himself facing menace after menace until he found himself facing an awkward choice. Once again, the young hero Invincible found himself in desperate need of aid but the difference this time was that his opponent was none other than Cecil Stedman.

The assembled Guardians (Robot, Rex-Splode, and Monster Girl) immediately sided with their friend. They were joined by Bulletproof, who despite having no close ties to the young hero, had grown intensely loyal to Robot over the course of their adventures together. At the conclusion of the fierce battle the Guardians stood victorious, but were all immediately released from duty due to their treasonous actions.

The Teen Team and the Invincible War

After their dismissal Bulletproof, Robot, Rex-Splode and Monster Girl revived the “Teen Team”. That was the super-heroic group that Robot had created before he joined the Guardians. Bulletproof fought alongside this new incarnation of the Teen Team (despite his significant age difference with the youths of the group) until the Invincible War rocked the planet Earth.

The war itself only lasted a little over two day. But at its close the Earth was in shambles, and both the Guardians of the Globe and the Teen Team suffered casualties. Bulletproof himself lost his left hand to one of the Invincible dopplegängers.

With the Guardians devastated once more, Cecil swallowed his pride. He asked Bulletproof and the other defectors to rejoin the team. After receiving an advanced prosthesis for his missing hand, Bulletproof gladly returned to duty.

Bulletproof remained in this capacity for the next year. He even covered for Invincible in his private company Invincible Incorporated. That was while the young Viltrumite was off-planet for the better part of a year fighting in the Viltrumite War. 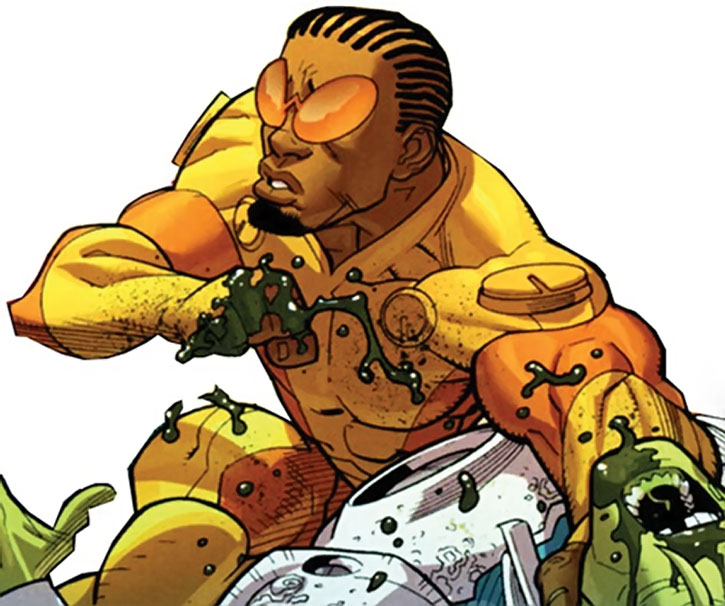 Invincible eventually returned. But shortly thereafter he was infected by a deadly virus that only affected Viltrumites. While Zandale consoled Atom Eve over Invincible’s condition, she revealed to him that despite his help over the last year Invincible Inc was in danger of going out of business.

Its clients were unsatisfied with the constant replacements for the hero that they paid for. Thinking quickly, Bulletproof reasoned that the business could still be saved. He reasoned that if he moved fast enough, changed his hairstyle and stayed a great enough distance away from the clients that he could impersonate the young hero. This could hold long enough for him to recover from the virus and return to duty.

With that, Zandale stopped being merely Bulletproof, he became Invincible.

Zandale is an attractive Black male that possesses a well-muscled, but not massive, build. He has long black hair which is normally styled into “corn-rolls” tight against his scalp and hang loosely around the nape of his neck.

Zandale’s Bulletproof costume is a garish yellow and orange leotard. It sports six large yellow discs that are affixed to: his shoulders, waist, collar bone and the centre of his back. The majority of the costume is yellow, the portions that are orange are mainly down the sides of his chest, the arms and the interior of his thighs. 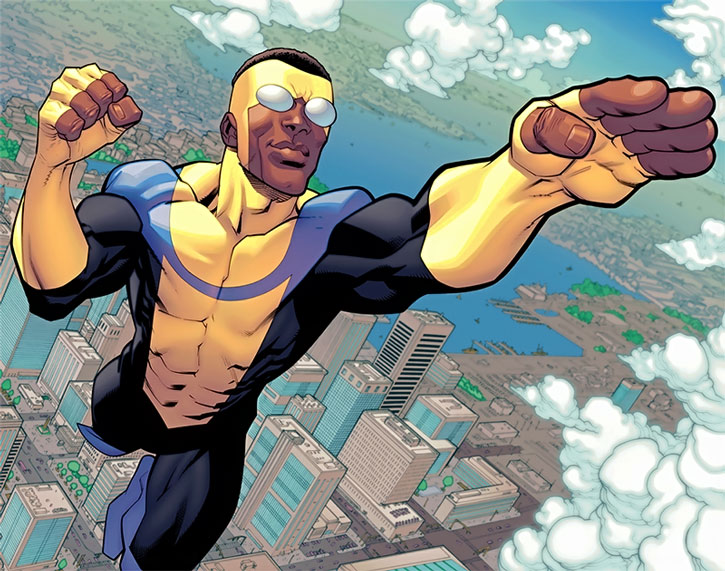 Like Invincible’s, the gloves for Bulletproof’s costume are fingerless. His eyes are covered by bright orange fisheye goggles.

Of note, the actual discs on the costume are solar batteries. They can be used to store and conduct solar energy into the wearer. Art originally added the discs to the costume when he thought that a Viltrumite’s unique powers were solar fuelled.

Finally, Bulletproof’s left hand is completely artificial but no one would never be able to tell with the naked eye.

As Invincible, Zandale wears a black body suit with blue knee-high boots, yellow fingerless gloves that extend over his forearms, and a large yellow ’i‘ on his chest. A blue band wraps around the shoulders of the costume and cuts between the dot and the body of the ’i‘.

The yellow dot of the ’i‘ extends into a cowl over Invincible’s head that leaves the top of his head, his ears, and his lower face exposed. His eyes are covered by pale blue fisheye goggles.

Bulletproof is a charismatic and confident man. He can be sarcastic and cocky both in and out of battle, and rarely holds back with his thoughts and opinions. Despite being in his late 30s, Bulletproof still displays many of the attitudes and habits of a man many years his junior.

He often drinks to excess, and lives a lifestyle full of debauchery. It wouldn’t be out of character for him to enter into a battle hung over from the previous night. And given a choice, he would choose to rescue a pretty girl from danger and leave the male bystanders to his allies.

Despite this, he is a stalwart friend and consummate hero. He will always stand by his friends and will fight until the bitter end, win or lose, even if his better judgement tells him otherwise.

Bulletproof: “I was recommended by one of the Guardians of the Globe … I’m legit.”
Art the Tailor: “Black Samson send you ?”
Bulletproof (smirking): “Why, because I’m Black ? We all know each other.”

“We sure as hell ain’t going by ‘The Teen Team.’ At least, not if you want me on the team. I barely remember being a teenager — and just being around you kids makes me feel old enough as it is.”

“I’ve spent too much time on the sidelines. Now’s my moment to shine.” 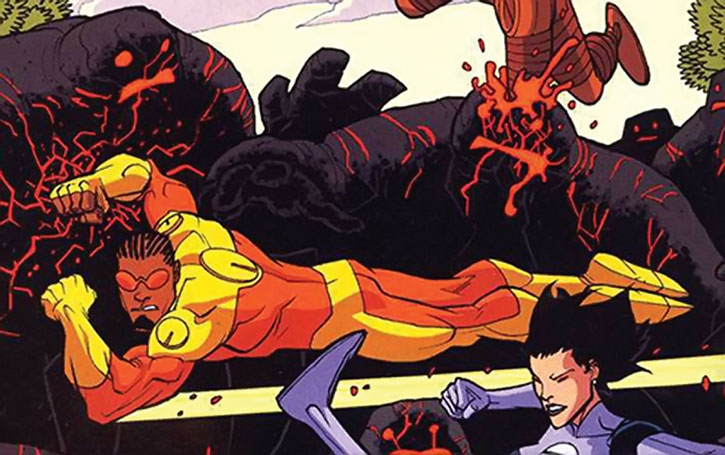 (While intercepting a laser beam, meant for the King of Atlantis, with his chest) “Why so scared your majesty ? Don’t you know I’m Bulletproof ?”

“God my head. How much did I drink last night ? I can’t believe I slept through the damn action alert.”

“Brother, you picked the wrong time to mess with me. I’ve got a killer headache — let’s see if I can return the favour.”

Bulletproof: “Hey, now. You know I’ve got a girlfriend.”
Outrun: “Well, I wasn’t planning on telling her anything about this — were you ?”
Bulletproof: (while smirking suggestively) “Well …”

(Hitting on a grown up Monster Girl) “Just leave it to me, girl. I’m the ‘get reacquainted’ EXPERT. I’ll take you under my wind. Get you up to speed.”

(While contemplating assuming Invincible’s identity) “If you’ve got an extra costume — I change my hair, don’t get too close to the client … yeah … I always did like that costume …”

Since the original Guardians of the Globe (GOTG) were obvious analogues for the Justice League, it is possible to integrate the events of the series by having Omni-Man slaughter the actual JLA.

Barring that extreme measure, it is entirely possible to simply throw in the GOTG as a separate superteam though, especially since they were based in Utah, comfortably far away from the east coast cities that were home to the members of the JLA.

An intermediate measure would be putting the Global Guardians in the stead of the GOTG, which would also reflect the more international membership of the GOTG.

Previously, Bulletproof’s abilities were assumed to be a form of kinetic absorption which he used to fuel his superhuman ability to fly. If the player wants to use this version of Bulletproof, they should reduce his STR to 04, his BOD to 06, and give him the following powers: Flight: 00, Kinetic Absorption: 14, Power Reserve (Flight): 09.

Redesigned the character in order to more accurately model the character as he has been shown in the book, as opposed to what has been described in the Invincible Universe Handbook.

STR capped at 09, since the largest thing we’ve seen him lift is a car (mid-sized sedan) and he hasn’t fared all that well against Viltrumite level opponents in the past. 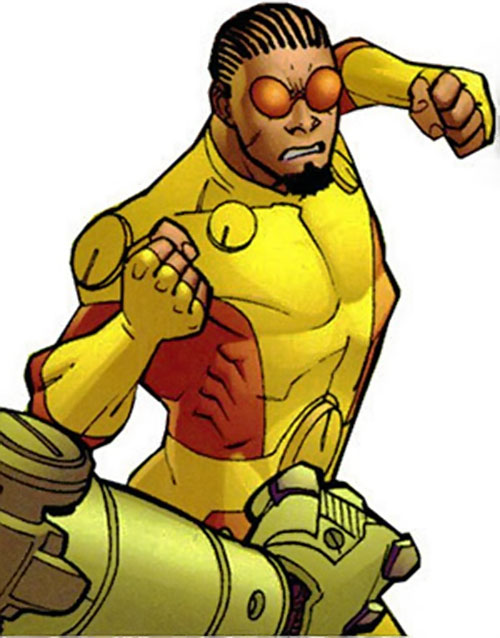 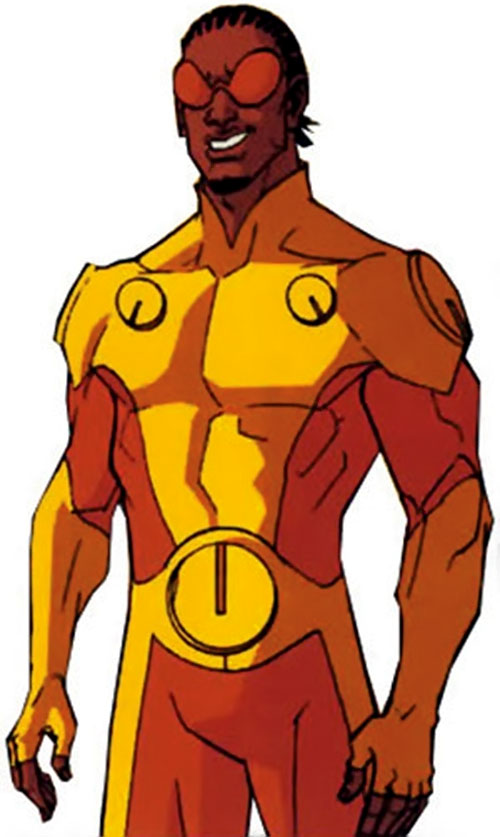 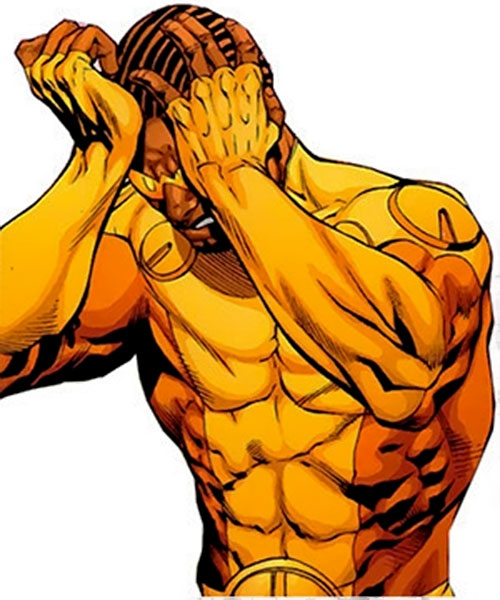 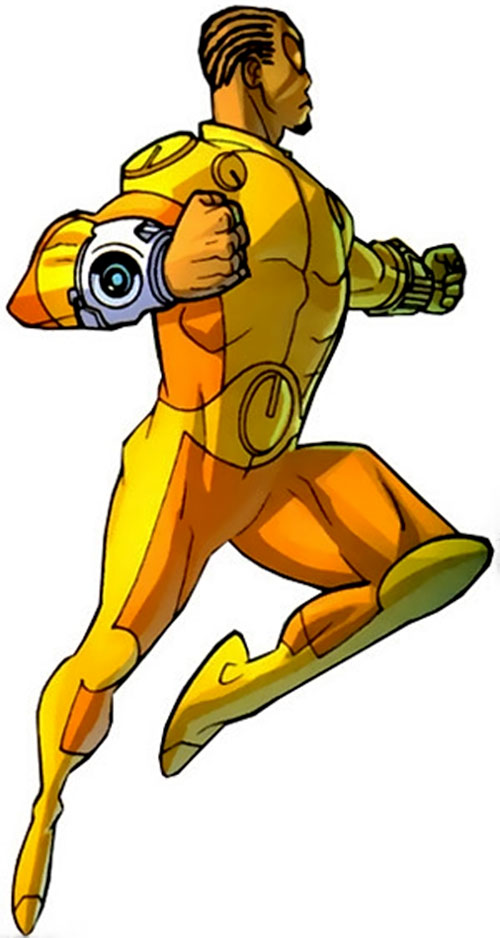 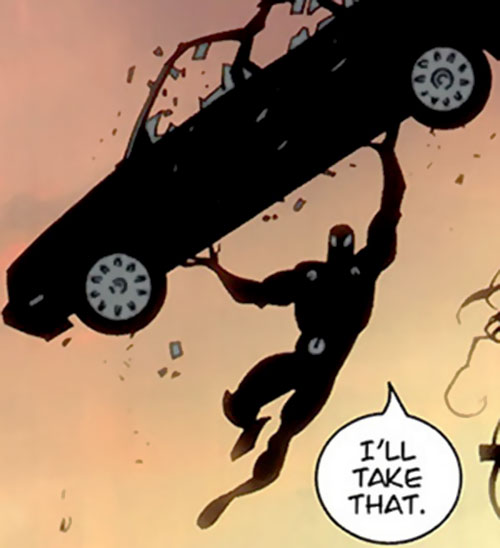 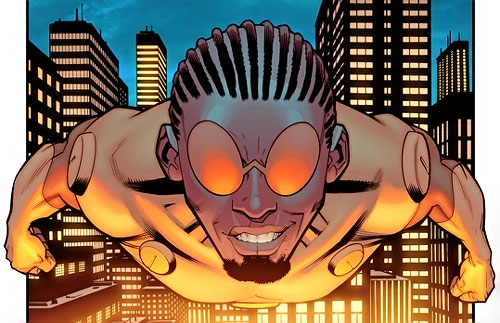