Bullseye is a notable Marvel Comics character, who first appeared in 1976. Originally, he was a foe of Daredevil (Matt Murdock).

Over the decades, he acquired a major stature. In good part through the fascination of many readers toward casual murderer/serial killer types.

A history of violence

We’ve had Bullseye stats since forever. All the way back to the 1980s, well before we put our stuff online.

This material was under our 2020s quality standards. Therefore, it’s now replaced with a small, specific profile about Bullseye’s earliest career.

It was done as an “emergent history” profile. So we’re only using period material, without any later flashbacks or information. This is to better represent the successive takes on Bullseye.

As it happens, only covering the 1970s means stopping right before Frank Miller becomes the writer on Daredevil. His seminal run on the book redefined and expanded the Bullseye character, making him one of Daredevil’s greatest enemies.

Pre-Miller Bullseye — the version created by Marv Wolfman and Bob Brown — was more of a villain-of-the-month costumed hitman. But he already had… something.

Or at least he did in his very first appearance.

Bullseye is a top-notch athlete, hand-to-hand fighter and soldier.

He’s also a skilled acrobat, and has exceptional reflexes.

Even beyond that, his greatest assets are :

The latter seems to be a power rather than a skill. For instance, Bullseye could throw a basic paper airplane through a high-rise’s window. This doesn’t seem physically possible, if only due to air friction.

He also knows how to ride elephants. And to juggle, though this skill might be trivial for him to learn due to his ballistic gifts. 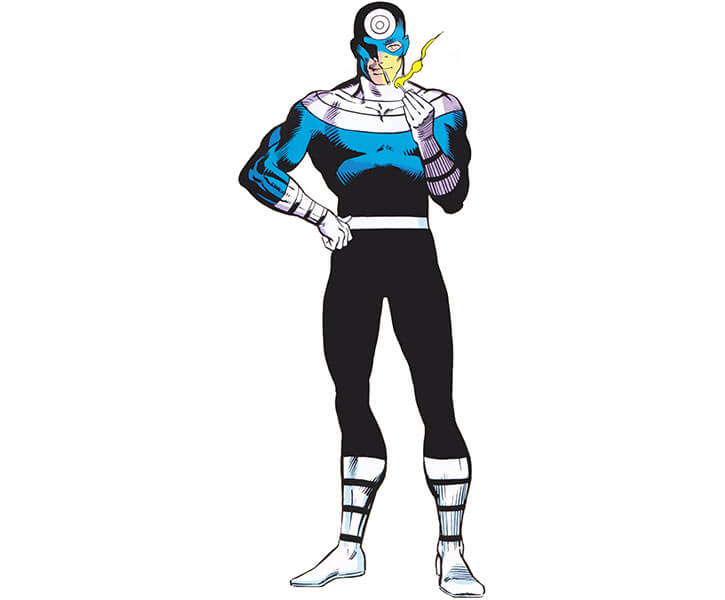 Bullseye prefers to fight using objects and weapons found around him. But he also once carried a distinctive modular handgun – the “cartridge gun”.

The frame, trigger block and handle can receive one of the modules he carries. Each module allowing for a completely different fire mode.

However, it seems that most modules take about two seconds to rev up and fire when the trigger is pulled. The weapon is thus better suited to shooting from ambush, or at an object.

In his second appearance, Bullseye used a light machinegun and a sci-fi energy handgun. Both were shot but once.

We later see that he has a pocket pistol hidden in his boot. Possibly an older Walther PPK in .32, or something close to that.

Something fitting to evoke 1976…

Mmmm, Aerosmith should do it.

Bullseye’s past is only known from his own accounts. There’s a good chance these are lies. Like the Joker’s, Bullseye’s past and origin are a labileLiable to change; easily altered unknown.

He once mentioned that his father used to beat him. Then Bullseye turned 14, and murdered his dad in retaliation.

He allegedly discovered his talent for throwing as he grew up. This reportedly led to signing a major league baseball contract. However, he then enlisted to join the war effort in Việt Nam.

(It was stated that Bullseye enlisted when the war broke out. That presumably didn’t refer to the fabricated 1964 casus belli. A more likely date would be early 1968, with Bullseye reacting to the Tết offensive.)

Well come on all of you big strong men

He apparently served multiple straight tours. Bullseye hated the Việt Cộng, and sought to kill them all. He was a deadly, extremely aggressive soldier.

But of course, the war and stress changed his personality.

This all came to a head during an ambush. Bullseye’s gun misfired, so he reflexively threw it. His M14 having its bayonet on, the long throw slew the soldier about to kill Bullseye.

(Bullseye having a M14 might mean that he was in the Marines, and a designated marksman – though his weapon is drawn scopeless. But a surprising number of M14s hung around with US units, especially in the Navy – even after it had officially been replaced by the M16.) 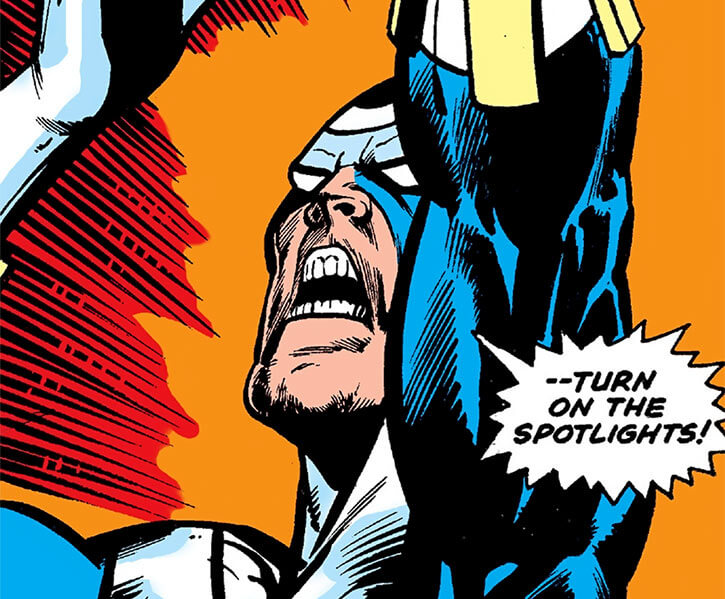 The beast has tasted blood

This incident created a craving within Bullseye. He left the service — presumably in 1972 or 1973 — and became a mercenary.

He chiefly worked in Africa, where he acquainted himself with various types of throwing irons. Bullseye loved to kill with these.

(Multiple Central African cultures have throwing iron designs. Here’s a Congolese weapon from the Brooklyn Museum’s collection  , semi-resembling the one Bullseye is seen throwing in a flashback.)

Bullseye then returned to the US. He wanted to build a dreadful reputation as an unstoppable murderer, then rake in the moolah through blackmail.

As part of this he had a costume made. My guess would be that it was sourced from Melvin Potter’s tailoring shop.

(At this point Bullseye’s appearances start. So from there on, we have reliable accounts of the events.)

In New York City, Bullseye murdered a wealthy man, Mr. Hunnicut. He then made it look like Hunnicut had been slain after refusing to yield to blackmail.

Bullseye then manipulated reporter Jake Connover into inviting Daredevil to his Daily Bugle office. This allowed for an ambush, then reeling Daredevil (Matt Murdock) in for a public showdown.

Bullseye picked the Madison Square Garden  as the battleground – during a three-ring circus show. He stated that he had men among the large crowd, ready to open fire if the NYPD intervened.

Bullseye dominated the fight, then escaped. Between this show of strength and Hunnicut’s death, he expected all future blackmail targets to agree to his terms.

Devil in the details

This time Daredevil attacked first, and kept the initiative. He also had Bullseye in close quarters – without room to regain range. The fight was one-sided, with Daredevil beating Bullseye up to prevent any harm to the Fosters.

Bullseye was promptly freed by the Purple Man (Zebediah Killgrave). Killgrave promised a $1M reward for the murder of lawyers Nelson & Murdock.

However, Murdock heard the safety of Bullseye’s machinegun being flicked. Bullseye nearly lost the subsequent fight with Daredevil, but somehow managed to take DD out with a surprise paper plane toss.

In a sudden Silver AgeSuper-hero comics from the late 1950s to the early 1970s moment, Bullseye chose to execute Daredevil by tying him to a giant crossbow bolt (?). Then shooting that at the New Jersey Palisades. 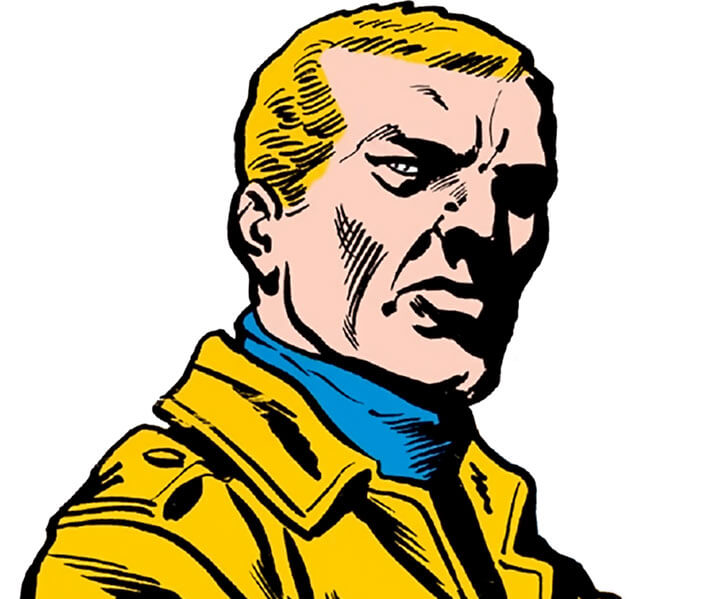 In 1977, Matt Murdock randomly ran into Bullseye. He prevented him from stealing a valuable pistol from a gun shop, but nobody believed the blind man’s explanations.

Nevertheless, this made Bullseye furious. Feeling that his reputation no longer was frightful enough, he decided to have a rematch against Daredevil.

Soon, Bullseye commandeered a television studio. He kept three bound hostages, with weighted knives hanging by a thread above their heads.

As seen on TV!

Daredevil eventually showed up. A head wound suffered during the gun shop encounter had deprived him of his radar sense. However, once Bullseye sensed that he had the upper hand, he went for a barrage of painful blows rather than kill shots.

Daredevil briefly recovered his senses, and knocked Bullseye back onto a boxing ring within the studio. This deprived Bullseye of weapons of opportunity, and Daredevil was a far superior boxer.

Though Bullseye drew his boot gun, he angrily shot Daredevil instead of a hostage. The vigilante survived the small-calibre impact, and arrested Bullseye. 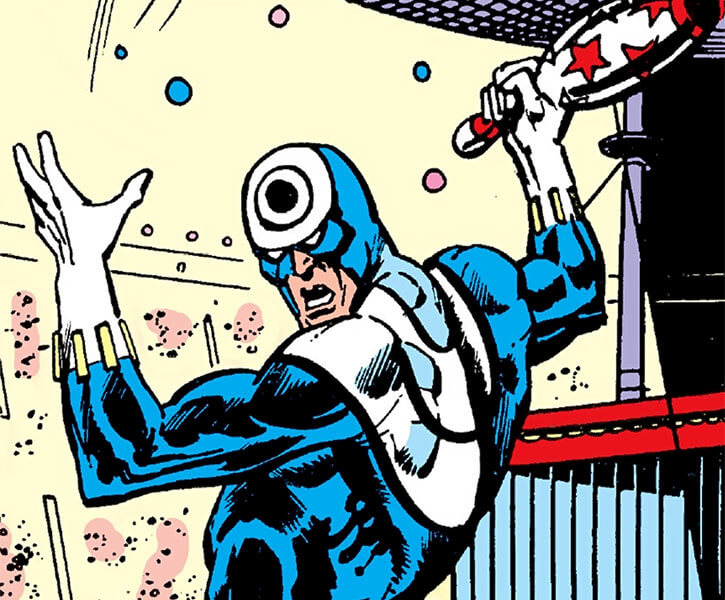 Bullseye was a model prisoner. However, during a psychiatric evaluation he killed the doctor, took a nurse hostage, and escaped.

Bullseye knew that they would be defeated. His actual objective was to film the fight and study Daredevil’s moves.

This worked – though Bullseye had to kill one hitman with a thrown life buoy to prevent him from talking.

Bullseye then struck at the Black Widow (Natalia Romanova) – a known Daredevil associate. He ambushed her at night in her apartment.

He then used her as bait for an ambush on Coney Island, along with a small army of Slaughter’s killers.

However, the Widow freed herself – and an unscathed Daredevil came in. Though he engaged Daredevil, Bullseye was eventually overwhelmed by fear and had a meltdown.

Unimpressed, Mr. Slaughter let DD and the Widow leave with a captured Bullseye.

Bullseye occasionally smokes, which is unremarkable by 1970s standards.

The golden metallic blocks on his costume are modules for the cartridge gun. 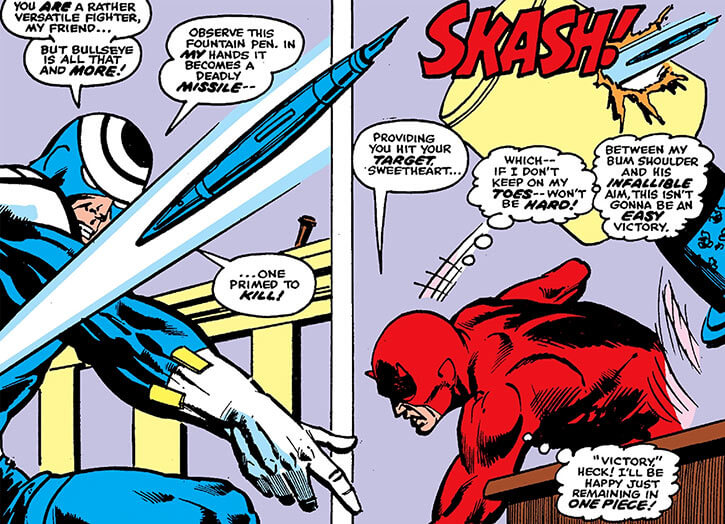 A cruel, domineering, verbose egomaniac and bully. He resorts to deadly violence at the drop of a hat.

He’s in love both with the sound of his own voice, and with harming and killing people using whatever projectile’s at hand.

By 1979, he has grown obsessed with killing Daredevil. This alone will grant him the reputation he feels he deserves – and wash away his defeats. By this point, it is becoming obvious that he’s not psychologically stable.

Bullseye has a rare weapons collection stashed somewhere. But he prefers stealing and killing to expand it, rather than spend his money.

“I wished for an *audience* to see our fight. An audience to witness *my* victory.”

“You move much too slowly to be a true opponent of Bullseye. But then, I expected little more than this shabby display of your prowess. You may be an extra-special policeman, Daredevil… but, to one who has fought in the wilds of Africa, against armies far more deadly than you could ever hope to be… you are nothing more than an ant is to an elephant.”

“Scarlet clown ! In my hands anything is a deadly weapon ! I don’t need my gun ! A packing crate serves as well !”

This early version of Bullseye could be recast as a foe for the pre-Crisis Huntress (Helena Wayne).

Enhance is a Skilled Power.

Every object a missile

Traditionally, Bullseye’s ability was modelled as Projectile weapons: 04, requiring an Object of Opportunity. It’s simple and it works well enough, you can stick with that if you prefer.

The only missing piece as of this writing is a Weapons Locker article about thrown weapons.

EV 03 is important in explaining why there are sequences where Daredevil can take dozens of projectiles from Bullseye. DD is clearly spending Hero Points to endure this, but each attack can’t be scoring that many RAPs.

I’m assuming a 8/4/5 Physical Attributes (and Martial Artist: 08) for the 1970s Daredevil. He eventually reached 9s after he was more established as a world-class master ninja, but that’s significantly later.

Keep in mind that in Daredevil #131, DD is still partially dazed by a grenade blast. He’s also not spending HPs.

That Bullseye’s DEX isn’t as great as DD’s becomes clear in #132 – especially since he blew too many HPs dominating DD in #131.

Bullseye has a masterful vibe in his very first appearance. Not unlike Deathstroke the Terminator, who Wolfman created a few years later.

Between that and knowing his future stature, I went for a Mayfair scale statting for his Mentals and Mysticals. As opposed to statting for allowing for what he does in the material, and no more.

DD likely has 65 Hero Points or so by that point. He had his own book for 12 years in 1976, but always had something of a “hard luck hero” vibe so I’m lowballing him slightly.

This is another keystone number, since Bullseye loses due to a comparative lack of HPs.

So yes, I picked a tiny slice of the character’s career… and still ended up with two takes of him in the material 😾. The original implicit promise, and the insta-decayed version.

If you want to feature the latter, here’s a separate character sheet for clarity’s sake.

(My loose sense is that #132 had a pacing problem, so the second fight between DD had to be resolved quickly. Therefore Bullseye had to get curbstomped, which set his power level for years.)

Enhance is a Skilled Power.

MIA toward Egomania, Minor Rage, SIF of Daredevil (which incapacitates him rather than makes him flee).