Our write-ups specifically cover the first 12 issues of the “Generation 1” comics series, which was produced by Marvel Comics between the years 1984 and 1993. In this version, the Transformers found themselves trapped on the Earth in the Marvel Universe. The series had brief cameos from Spider-Man, G.I. Joe and even visited the Savage Land .

Bumblebee is one of the most popular, enduring characters of the Transformers franchise. His diminuitive stature and courage made him a favourite amongst the younger fans.

Bumblebee’s robotic form grants him superhuman strength (“Class 5”), durability and renders him immune to all forms of human frailties (i.e. aging, sickness, disease, hunger, fatigue, etc.). He can survive virtually any injury. Even if he was smashed to pieces, Bumblebee could be revived upon being repaired.

As a Transformer, Bumblebee can restructure his body into a secondary form for the purpose of disguise. Bumblebee’s alternate form is that of a Volkswagen Beetle . While transformed, he retains his intelligence, capacity for speech and mobility.

Bumblebee’s main function amongst his Autobot brethren is reconnaissance. His small stature, visual acuity and infiltration skills are among the highest of his peers. Additionally, he is the most fuel efficient Autobot and is extremely adaptable to underwater environments.

Bumblebee was one of the Autobots selected by Optimus Prime to clear a path through an asteroid field that threatened to destroy the planet Cybertron. Upon completion of their task the were attacked by their enemies, the Decepticons.

Bumblebee and his allies, spent from their efforts in destroying the asteroids, were no match for their enemies. They were all rendered inoperable by the fierceness of the Decepticon assault. Rather than allow the Decepticons achieve their victory, Optimus set the Ark on a collision course with the planet Earth.

The Ark struck the base of Mount St. Hillary where it lay inert for over 2 million years. Bumblebee was revived nearly 2 million years later, after the volcanic mountain erupted and awakened the Ark’s computer and repair systems.

The damaged computer systems mistakenly assumed that the mechanical devices that littered the Earth’s surface were sentient machines, and rebuilt the Cybertronians in their image. Bumblebee was rebuilt in the image of a Volkswagen Beetle.

Upon his revival, Bumblebee was tasked with gathering tactical information about the Autobots’ surroundings. It didn’t take him (and his four allies) long to encounter humanity. The autobots barely made it down Mount Saint Hilary when they stumbled across a drive-in movie. Upon seeing the large assembly of vehicles, they decided to try and make contact with the earthlings.

Bumblebee grew overly eager when they approached the vehicles and rear-ended one when he attempted to greet it. To his shock, an being made entirely of organic material got out of the vehicle and approached him. Before he could make sense of what had happened, the Decepticons attacked.

Bumblebee was gravely wounded during the assault. Delirious and in pain, he allowed the organic being to climb inside of him and guide him away from the battle. The human (who he soon learned was named Buster Witwicky) drove him back to his father’s garage. When they arrived, Buster convinced his father Sparkplug to repair Bumblebee, but only after Bumblebee begged them both for help.

Sparkplug spent several hours repairing Bumblebee’s damage. When he finished, Bumblebee transformed into his robot form and thanked the stunned humans. Sparkplug unleashed a flury of questions to the giant robot which Bumblee answered to the best of his ability. He told Sparkplug about his allies the Autobots, and their very real need for a source of fuel.

Recognizing the truth behind Bumblebee’s words, Sparkplug agreed to help the Autobots design a method of adapting gasoline to their own needs.

Minutes after their arrival, the Autobots were attacked by the Decepticons. The Decepticons had discovered the Autobots plan and could not allow them to gain the means to refuel. As the battle raged, Optimus Prime commanded Bumblebee to protect the Witwickys. Bumblebee led the Witwickys away from the main battle… and right into Megatron’s clutches.

Left with little choice, Optimus chose four of his allies to face the Decepticon assault that he knew would be coming. In order to do so, the remaining Autobots gave up their meager remaining fuel supply to fully re-energize Prime and the others. Bumblebee was one of the volunteers. With that Bumblebee was rendered inert, until he was revived much later by Ratchet.

Bumblebee’s next major operation occurred when he was sent to protect Buster Witwicky from an imminent Decepticon attack. Buster had come to possess the Creation Matrix (a program that allowed its possessor to control any unliving metal and to create articial life). Shockwave, the leader of the Decepticons at that time, desperately wanted the matrix for himself.

Bumblebee (and his ally Bluestreak) got to Buster before Shockwave’s automaton Jetfire did. When Bumblebee found Buster, he realized that the human was hiding his power from his friends and family. Bumblebee eventually convinced Buster that only he could stop Jetfire.

Realizing that Bumblebee was correct, Buster used the Matrix to defeat Jetfire before returning to the Ark alongside his Autobot allies.

Bumbleebee is inconsistently depicted throughout the first five issues of the series. The only common element of his depiction is the colour of his chassis. The majority of his body is a bright yellow colour while his arms and legs are a dark blue colour.

Eventually, Bumblebee’s depiction stabilized. His head seemed to be covered by a golden horned helmet, and his face was decidedly human looking. His chestplate was made up of what appeared to be the roof of Volkswagen Beetle with the red symbol of the Autobots displayed prominently in the middle of it.

In most instances, Bumblebee comes across as the Autobots’ little brother. He is curious, energetic, scrappy and impetuous. He obviously idolizes his larger brethren and often goes out of his way to prove his worth to them.

Bumblebee is unquestionably courageous. Despite his diminutive size he will not shy away from combat with the Decepticons. Instead, on missions that don’t require stealth, he generally leads the charge against his much larger foes.

“I’m gonna be the first to greet an earthling !”

“Do all small, pink things ask so many questions ?”

“It is good to see you again, friend. I hope all has been well with your internal mechanisms.”

“Buster, we came here for a serious purpose — to save you from the Decepticons !”

Characters with this advantage increase OV/RV vs exhaustion by one CS. 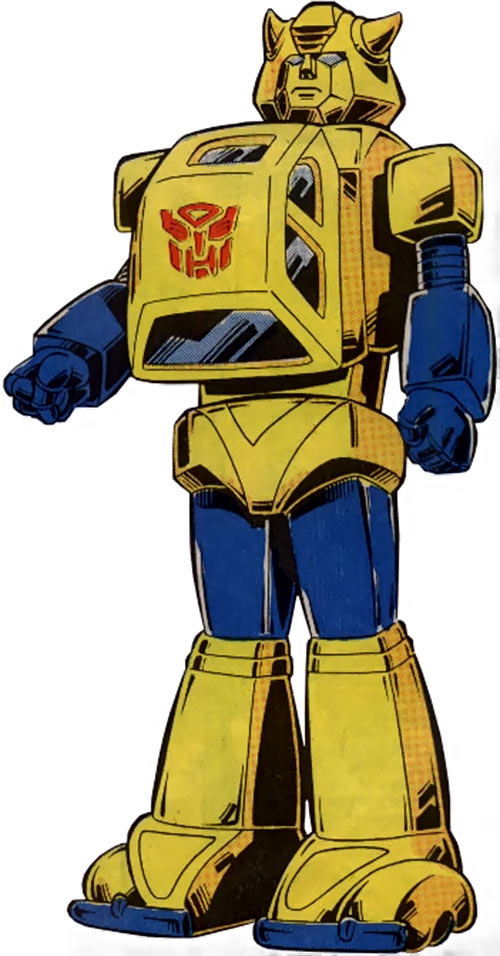 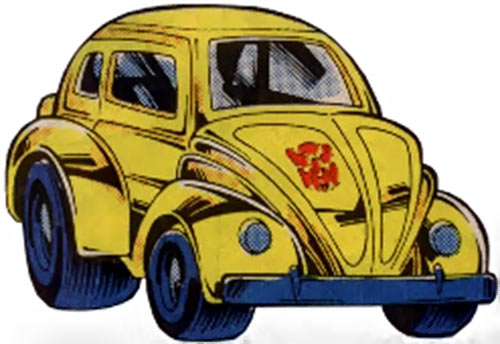 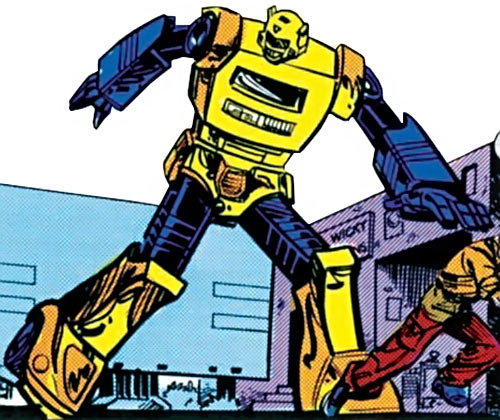 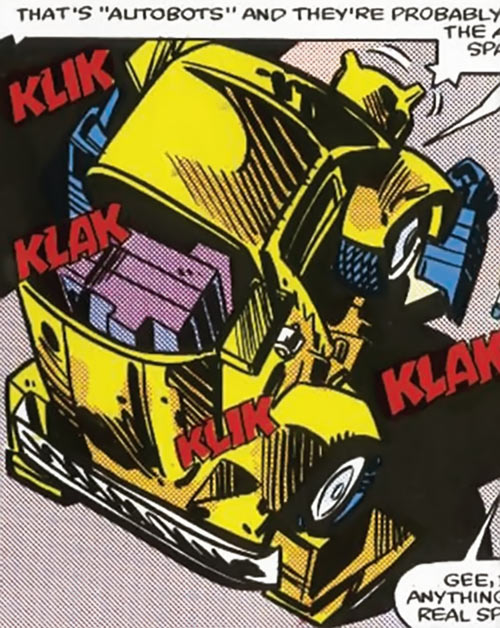