These weren’t the greatest. And the early 1970s weren’t one of the high points of the League either.

But there probably is a, err, seed in there for them to be reworked to a better standard by interested GMs.

They carry an ample collection of seeds from, respectively, the Bür plant and the Kēr plant.

Both kinds of plants are the size of a large tree. Both can defend themselves by animating their limbs as tentacles. 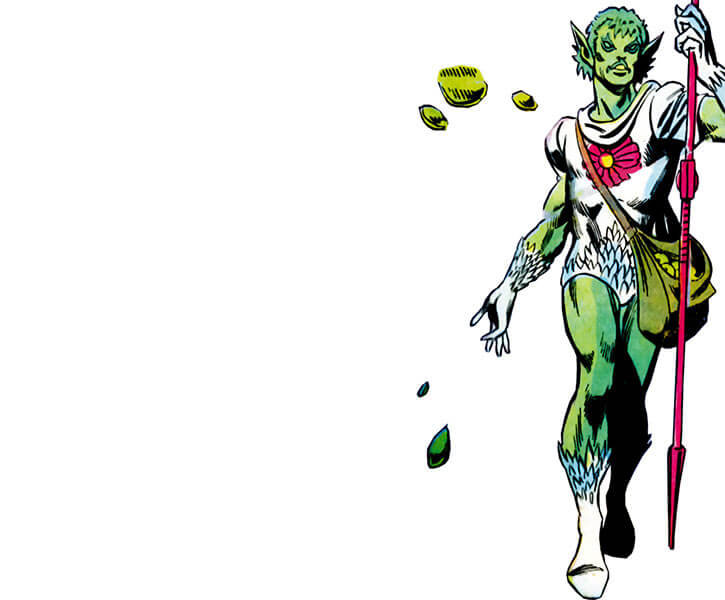 They also carry powerful staffs, from which their power comes. Demonstrated abilities :

This redirection requires a reflective surface in orbit. Say, a metallic artificial satellite. 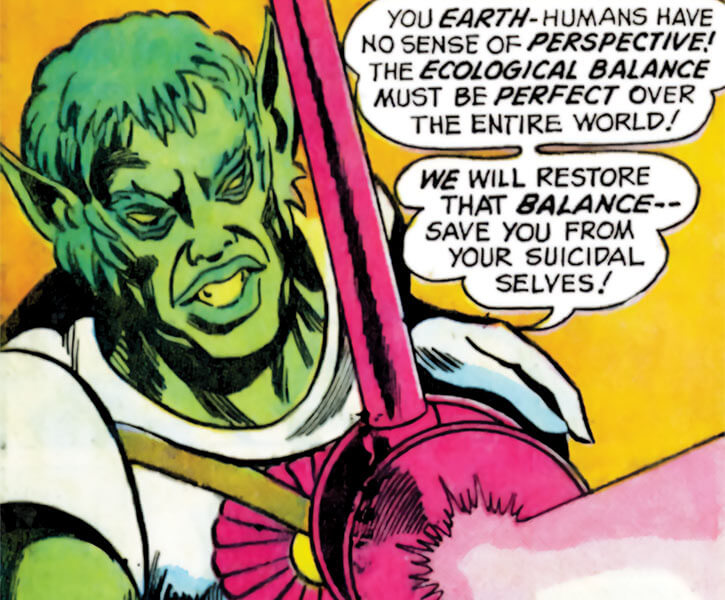 The two Keepers of the Balance just landed in the US one day. Then started sowing their alien plants.

They favoured industrial sites and cities. Their alien plants would wreck the asphalt, nearby buildings, underground pipes and cables, etc. as they rooted and grew.

The JLA intervened. However, all their blows and super-powers thrown against the Keepers or their plants were redirected against distant buildings and bystanders. Or where they could trigger catastrophes such as landslides or oil spills.

The aliens even used such powers as the Flash (Barry Allen)’s superspeed winds to attack Leaguers.

However, Batman noticed that the Keepers kept moving, rather than stay in an area they had planted with alien thingies. From there he somehow deduced a weakness.

The League approached the aliens, offered to help them plant their seed. They did so with amazing speed and effectiveness.

As the Keepers stared in disbelief, Green Lantern (Hal Jordan) disarmed them by surprise, taking their staves away. The aliens started suffocating, as the plants created too much oxygen for their lungs to process. They were forced to surrender.

GL then chewed them out for trying to help Earth against the advice of the natives, and they left.

Thanks to the League’s heroism, Earth could safely resume its path toward political inaction and massive casualties through pollution and climate change.

The Keepers are a pair of zealous religious activists whose duty is to seed their plants. These are meant to destroy overbuilt areas to restore “balance” between infrastructure and nature.

To them, their actions are self-evidently holy.

Kēr Sēd in particular is incessantly quoting scripture. Which may occasionally annoy his father.

Their zeal, and the power of their staff, make them smug and unlikely to listen to natives.

One suspects that the pair are from a planet that very nearly destroyed itself through pollution. And was narrowly saved by massive, global replanting.

It also was a recurrent motif in JLA issues of that era. 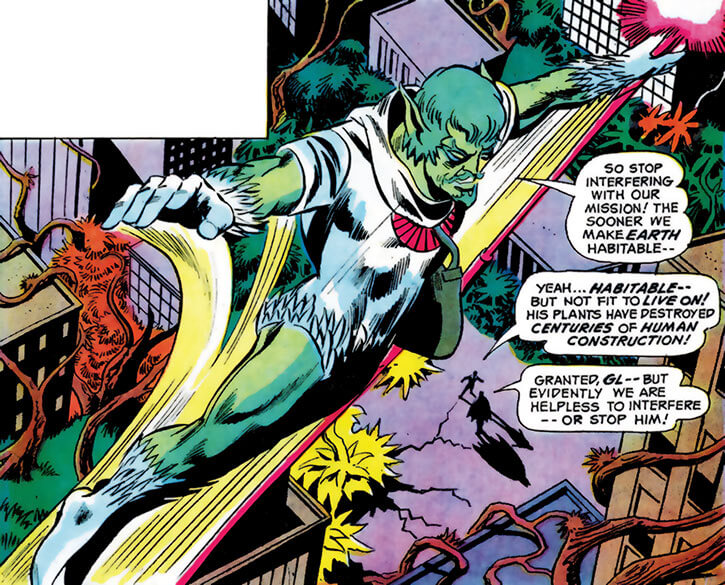 (Quoting scripture) “The Supreme Harmony blesses the plants that grow midst the rocks. May they flourish and multiply.”

“You Earth-Humans have no sense of perspective ! The ecological balance must be perfect over the entire world ! We will restore that balance – save you from your suicidal selves !” 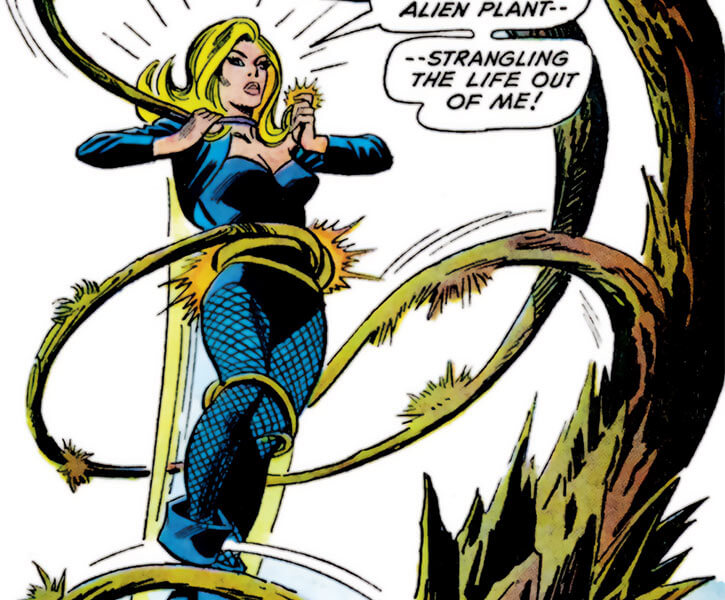 Keepers of the Balance

Both have the same stats.

MIA toward their mission, Fatal Vulnerability to high oxygen level/lack of pollution. 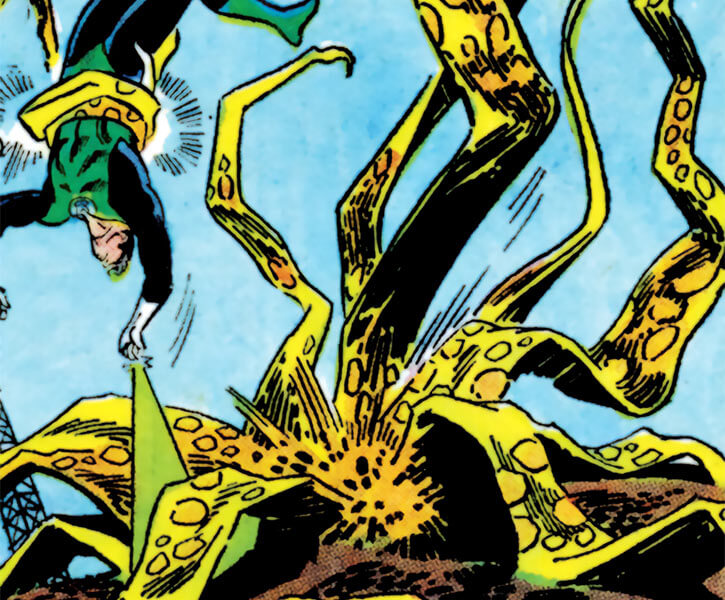 If attacked, the plants attack with Snare: 10, serving as its own AV but with a Range of 0 APs. They hold their attacker aloft. Maybe they keep them there until thirst kills them and the corpse can become nutrients.

Bür plants are yellow, love water, but are vulnerable to heat. Kēr plants are wood-like, can withstand tremendous vibrations but react badly to foreign bodies within their organism.

There ain’t much material, so many of the scores can’t be well-supported.

The Enhanced Initiative is there to allow them to counter the JLA’s efforts against them in time. I put it at more-than-Flash levels, hence the monstrous APs. Barry didn’t actually try to Take Away the staves, but it would almost certainly have failed with his attempt being Reflected.