A skilled martial artist, Burst has been given superspeed by Sublime Corporation’s empowerment processes.

(See Lobe’s entry for most of what’s known of his history.)

While he’s been referred to as a disgraced kung fu speedster, the nature of his disgrace is unclear. All that’s known is that he joined the Sublime Corporation and was given powers by them.

He did fine against the X-Men while cyberpathically enhanced. But without that edge he found himself well matched by Psylocke.

Burst enjoys fighting, especially if he can run rings around his opponents and mock them. 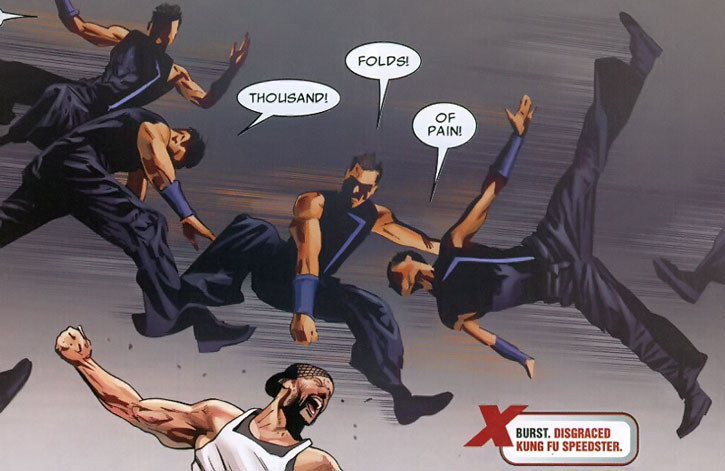 Having catalogued the genome and fighting style of almost all known mutants, the Sublime Corporation’s supercomputer can download strategies to fight them into cybernetic implants in Burst’s mind.

This allows him to predict and avoid their attacks, and strike past their defences, giving him Power Reserve (OV): 04 and Weakness Detection: 08 when fighting a scanned mutant (as long as the computer isn’t interfered with).