Bush Rangers have been genetically modified to gain superpowers. Created to run black ops inside enemy lands, they are doppelgängers, capable of changing their appearance to look like other people. Even superheroes with super perception powers like the Orphan couldn’t detect their disguises at first glance.

It probably was due to these abilities that they were able to imitate The Spike’s powers.

Seeking expendable experimental subjects, the C.I.A. staged a fire at the Texas State Penitentiary. The public was told that all of the inmates had been consumed by the flames. In truth, all the inmates agreed to sign up for a secret experimental procedure that would transform them into mutants under the control of the C.I.A..

The inmates had their cellular structure altered, and some died. The C.I.A. ended up with 13 survivors, dubbed the Bush Rangers. However, most of the Bush Rangers kept their criminal minds despite the mutations.

A year after the penitentiary fire, the Bush Rangers took over the Mars 2010 Space Station where they were being trained. They threatened the government with killing the hostages if they weren’t allowed back to Earth. But in actuality, all hostages were already dead.

A CIA agent called Wright allied with limelight mutant team X-Force II, soon to become X-Statix. The mutants were to attack the satellite and eliminate the Bush Rangers. X-Force would fake having been defeated by the Bush Rangers and then get saved by a CIA special squad.

In exchange, the CIA would stop an upcoming attack ads campaign against X-Force leader, the Orphan – a campaign launched by some pharmaceutical corporations. The Orphan had previously saved a mutant child with extraordinary healing powers from being vivisected by said corporations.

X-Force accepted, despite the Anarchist objecting that one of the three core members (the Orphan, U-Go Girl or he) was fated to die in that mission according to a presage.

The mutant team traveled to the satellite. There, they found the Bush Rangers disguised as the hostages, and after dividing themselves in pairs, were ambushed by their enemies. As a result, their new member, Dead Girl, was apparently killed. Worst, The Spike, convinced that the Bush Rangers were victims of a racist justice system, joined them.

The Spike tried to persuade them to deal with the former criminals. He also tried to hinder the mission, so the Orphan would be fired from the team and he could replace him. However, he started to change his mind after Tray, the Bush Rangers’ leader, confessed his past crimes to him. These crimes were so horrible that even his mates weren’t aware of them.

When X-Force attacked the Bush Rangers, all Rangers looked like the Spike, having shape-shifted to mimic his appearance. Regardless X-Force went into battle and the fighting was soon over, as the Spike switched sides again and rescued the Anarchist from the Bush Rangers. Phat was badly injured, though.

Now, about that deal…

The respite was interrupted by the arrival of the CIA strike team. They intended to chalk up X-Force as casualties to “friendly fire”.

U-Go Girl managed to teleport herself, the Orphan, Doop and the Anarchist to a craft whose engines suddenly fired, rocketing them into deep space. Agent Wright confronted the remaining members of X-Force and demanded their surrender.

An escalation of tension and a misunderstanding lead to the Spike killing Agent Wright. With nothing left to say, the remaining X-Force members commandeered the CIA’s space shuttle and headed home.

But they were unaware that the Spike in their midst is not the real deal. It was a Bush Ranger, while the actual Spike was still lying on the space station, heavily injured.

On the deep space craft, Anarchist discovered a life-pod that could take them back to Earth. The only problem is that it has room for only two people and Doop. Rather than be forced to make such a gruesome choice the three decide to roll a die. One roll each with the two highest getting a ride home.

The Anarchist used his sweat power enabled him to make the die fall whichever way he wants, and he got a lower score than the others two on purpose, wanting to save his friends. However, thanks to Dead Girl and the Orphan’s postcognition powers, X-Force II also saved the Anarchist.

The general jubilation was cut short by the apparition of the real Spike. The imposter, using a version of Spike’s powers, quickly killed the true Spike and attacked the rest of X-Force. After a short skirmish, the Orphan managed to kill Tray, but not before one of his spikes, deflected by the Anarchist, impaled Eddie Sawyer, aka U-Go Girl.

The Bush Rangers were held in death row for being killers (or in Zipo’s case, something worse) and psychopaths. They are a really Chaotic Evil gang, manipulative and who enjoys causing pain.

But being brutal and mad doesn’t means being stupid. If they have the opportunity, they will use Chameleon to simulate being innocents bystanders or friends of their victims, and after that ambush them. The first time X-Force II met them, the Bush Rangers were disguised as their own hostages, and delivered good acting work thanking their heroes for the rescue.

The Bush Rangers follows the Suicide Squad motif. They’re dangerous criminals converted into a black ops task force. They could be easily transferred to the DC Universe.

Many of them probably were Belle Reve or Arkham Asylum patients. Minor psycho-killers believed to be dead, such as Abattoir, will fit perfectly.

Bonuses and Limitations:
Mimic is limited to Physical Powers. 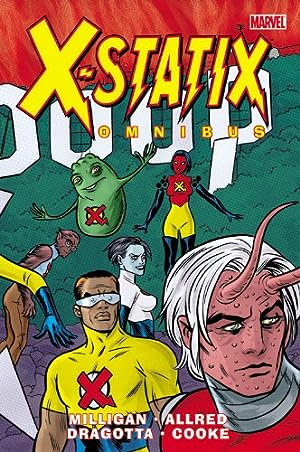 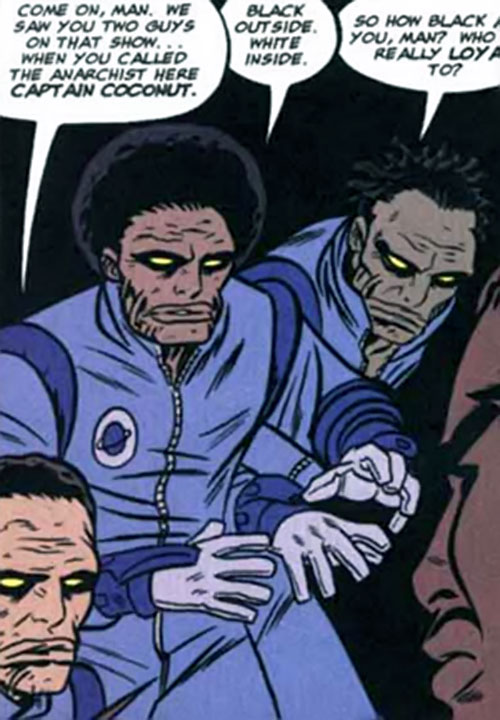