Bushmaster sports lifelike cybernetic arms. Furthermore, his legs were replaced by a bionic, snake-like tail that extends approximately 14 feet from his lower abdomen. This powerful tail is permanently attached and allows him to move quickly via reptation or powerful jumps.

Both arms are equipped with 6” non-retractile “fangs” on the back of the hands. But while they’re pretty strong, Captain America’s arms proved stronger.

Bushmaster can use his tail to ensnare and constrict people. But he does not uses this tactic as often as he should, presumably because it reminds him that he’s a freak. He prefers to attack with his claws, unless he knows that it’s not going to work – or if he’s trying to capture his opponent.

Quincy “Bushmaster” McIver’s grew up on an unspecified Caribbean Island — our guess would be Saint Vincent . He idolised his older brother John, who was a rude boy  and a thief.

When Quincy was 12 John took him with him to steal fruits. Quincy was caught and beaten by the merchant, accidentally revealing that the other thief was his brother. Infuriated, John beat Quincy, and then took his little brother along to beat up the merchant. The brothers hit the man so hard that they killed him. 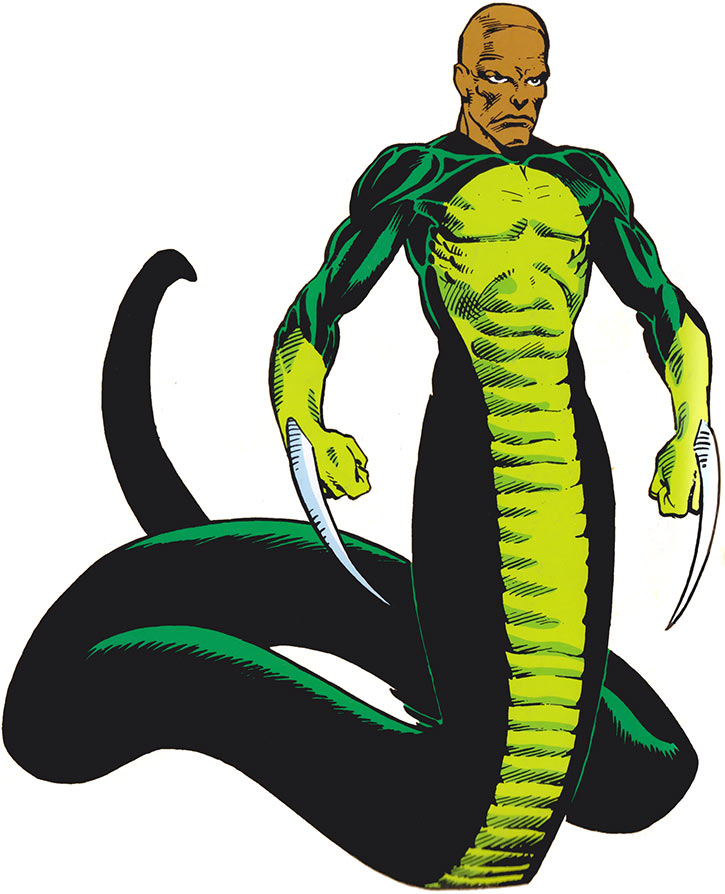 John went on to work for the mob of one Herve Argosy. Once Quincy was 15 or 16, John had him take menial jobs for the Argosy crew.

As Quincy and his fellow peons were unloading a cocaine shipment, the police barged in. Quincy panicked, fearing what John would do to him if he got arrested. He dove off the quay and tried to swim away. However, a police patrol boat accidentally ran into him. The propellers destroyed McIver’s limbs, though he somehow survived.

John then left the island to work for Argosy in Europe, and changed his name to “John Bushmaster” to celebrate hitting the big time. Crippled and callously left behind, Quincy came to admit that John had never loved him and just used him. He sank into a depression and wished to die, though his handicap made even suicide unworkable.

Put on the red light

Circa 1979 Roxxon employee Seth Voelker came to visit at the hospital. Interested in a disposable quadruple amputee with a criminal past, Voelker offered to have McIver freed, flown to the US and operated upon to receive new limbs. Still wanting to die, McIver agreed to the deal.

Back then Roxxon was in the final stages of assembling its Serpent Squad, and Voelker would soon become Sidewinder. The company wanted to continue experimenting with the cybernetic techniques used for the Squad, and McIver was a good subject to receive new limbs.

For once, things turned out right and Quincy gained working arms. As to his missing legs, they were replaced by a huge serpentine tail. Roxxon vaguely promised they would replace the tail with legs after a year of testing. But Brand Corporation, the subsidiary developing the cybernetics, was shut down months later. 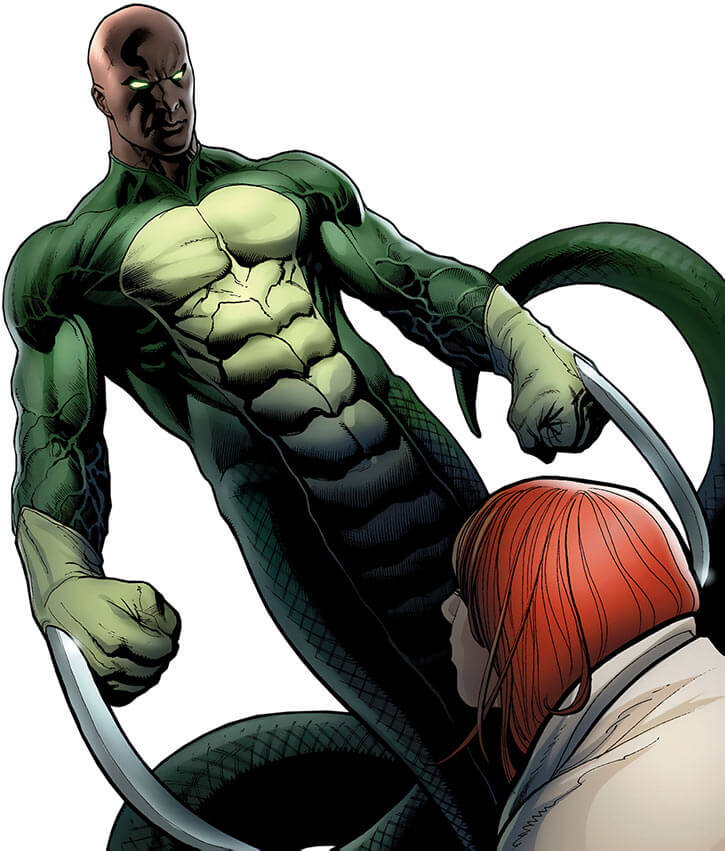 McIver opted for the snake-themed code name Bushmaster, presumably when it was planned for him to join the Serpent Squad. Even he wasn’t sure whether it was meant to spite or honour his brother. With Brand Corporation shut down and Roxxon in disarray after the Serpent Crown crisis , McIver was essentially forgotten and became a small-time criminal in the US.

As he was floating in and out of prison, Bushmaster was contacted by Voelker again. McIver was invited to attend a presentation of Voelker’s new concept, the “Serpent Society”.

Bushmaster joined the Society. He was part of their early sales outreach efforts, teaming up with Diamondback (Rachel Leighton) to present the services of the Society to AIM. Their pitch worked the first major contract for the Society – killing MODOK, the former leader of AIM.

Bushmaster and Diamondback spearheaded the effort and found MODOK hiding in an abandoned submarine. Bushmaster nearly skewered MODOK, but the freak blasted him point-blank at the last second, ruining Bushmaster’s arms and throwing him unconscious into the sea.

Leighton nearly drowned dragging McIver to the shore. Still, their combined efforts had damaged MODOK’s chair and he could not fly much further.

The rest of the Society found and killed MODOK, then stole the body from the authorities. The pay for that successful assassination allowed McIver to get his bionic arms replaced by similar ones. 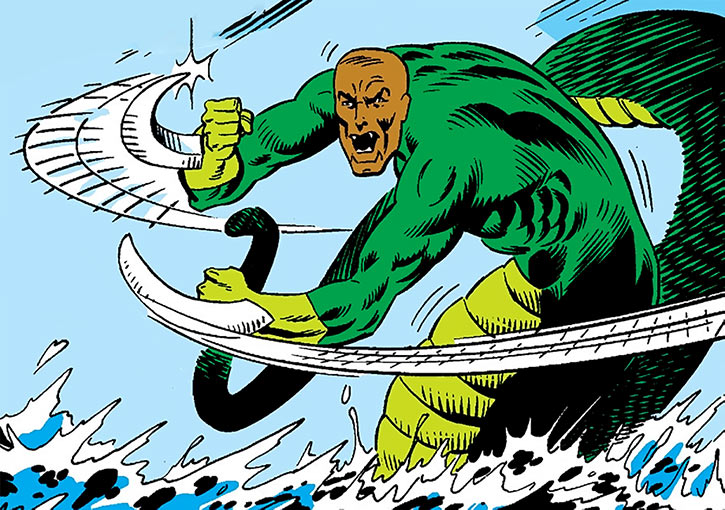 When Death-Adder (Roland Burrough) was killed, the Society went on the warpath to avenge him. Bushmaster teamed up with the Cobra (Klaus Voorhees) to beat up renegade AIM agents to determine whether it was revenge for MODOK’s death. They came to the correct conclusion that it wasn’t.

When the Viper (Ophelia Sarkissian) and her double agents took over the Society in 1988, Bushmaster remained loyal to Sidewinder. As a result, he was imprisoned and poisoned. A desperate Diamondback recruited Captain America and his allies to free her fellow loyalists. Bushmaster, Black Mamba and Asp (Cleo Nefertiti) were saved using antidotes designed by the Cobra.

Sidewinder soon left the Society, and Cobra took over.

When the Society was hired by Ghaur and Llyra to recover mystical artefacts, they clashed with the X-Men. Bushmaster fought a woman who turned out to be Diamondback trapped in Dazzler’s body (long story). She convinced him that she was the real McCoy (no relation) and Bushmaster agreed to sit out of the fight, considering his debt toward her to be repaid.

The Cobra put Bushmaster in charge for a few days as he went on a personal mission, presumably because he saw McIver as dependable. During this time Coachwhip (Beatrix Keener) and Asp ran into trouble, but Bushmaster organised an operation that freed them.

Cobra then returned and resumed his leadership, flush with confidence now that he had single-handedly defeated his former associate Mister Hyde. Voorhees changed his code name to King Cobra. 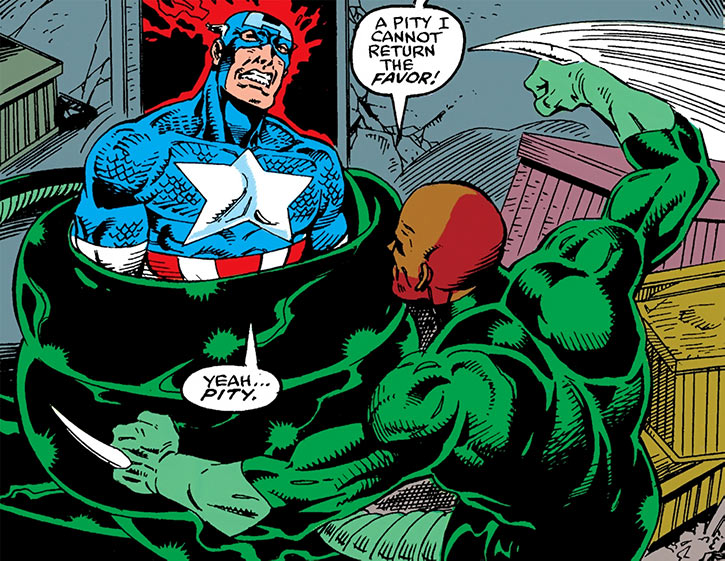 When Diamondback was tried by the Society for treason, Bushmaster was among the minority in her favour. Her allies Black Mamba and Asp tried to save her, but Cobra took the loyal Bushmaster with him and they subdued both women. Diamondback then hired Paladin to recover her friends, and ended up fighting Bushmaster during their raid.

Bushmaster attempted to convince her to surrender so he would not have to hurt her. However, she accidentally hit him in the mouth with a miniature acid bomb. Apparently Bushmaster received care rapidly, and the acid did not inflict serious damage. Diamondback and Paladin were captured.

Captain America then came to free Diamondback and her allies, but Bushmaster spotted him. He caught Captain America into his coils, but was nevertheless defeated. Cap then defeated the rest of the Society. Bushmaster apparently decided to go in prison with the others, though he could have slithered away.

He was soon freed due to a lack of evidence of wrongdoing. However, he considered committing a random crime to go back to prison, not wanting to be an isolated freak while his fellow Serpents were behind bars.

When the Society reassembled, still under King Cobra, Bushmaster was among them. However they were all defeated and arrested by Force Works after a clash with Captain America, Free Spirit and Jack Flag.

In 2006 Baron Helmut Zemo assembled a large army of coerced superhuman criminals, to help fight the Civil War on the government’s side. Several Serpents were pressed into that “Thunderbolts Army”. The Rattler (Gustav Krueger), Bushmaster and the Cobra were seen training with Swordsman (Andreas Strucker) and several other villains.

This force was deployed during the Wellspring crisis, when most of the Earth’s population was endowed with superhuman powers and driven crazy. Bushmaster and the Cobra were on the Epsilon Squad, which was loaned to the Japanese government to restore order in Tōkyō.

Later on, Alyosha Kravinoff went insane and started capturing animal-like supervillains to assemble a zoo. Bushmaster was considered to be serpentine enough and kidnapped. The captives were fitted with explosive collars and drugged into insanity, but the Punisher put an end to this demented menagerie. Bushmaster apparently made a full recovery.

By 2009 he was back with the Serpent Society, though they were defeated by the Avengers in unrevealed circumstances and presumably arrested.

By 2011 the Society has resumed operating, and was hired by Mr. Negative to stop Anole (Victor Borkowski) and Rockslide (Santo Vaccarro). However Rockslide proved much more powerful than anticipated, and Mr. Negative intervened personally in a confusing manner. The Society chose to end the contract and retreat under their client interference clause. 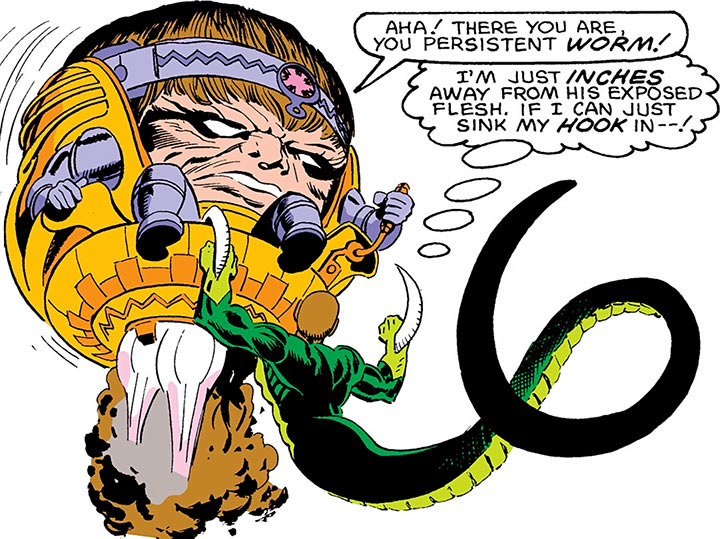 The next year, McIver was part of a Society squad that tracked down Staff Sergeant Marcus Johnson after an open contract in him was floated their way. Though the Serpents were about to take the Ranger down, Deadpool unexpectedly intervened since he was also after the bounty. The Society agents found it impossible to take Deadpool down, and everybody ended up surrounded by S.H.I.E.L.D. forces.

However, McIver was seen very soon after, so he presumably escaped arrest. He took a solo contract with Headhunter, representing the Purple Man, to secure a shipment. However he ran into Stilt-Man (formerly Lady Stilt-Man), and was surprised by how thoroughly upgraded her battlesuit was. Stilt-Man bashed Bushmaster hard enough to escape.

Bushmaster later was on the Purple Man’s team that attacked Misty Knight’s HQ, deliberately triggering alarms to create a diversion. He was brought down by an automated electrified net launcher while so doing.

Bushmaster apparently also escaped from that one, since he was soon stealing from a bank’s vault with a Serpent Society team. However, this heist was accidentally stopped by Hope Summers.

Bushmaster is presumably about 20. He can sit in a chair, provided that a/ it’s broad enough and b/ he has room underneath for his tail.

He occasionally has solid green glowing eyes. Presumably these are special lenses worn for intimidation purposes, perhaps at Cottonmouth’s suggestion.

Bushmaster is a kid who got caught very early in the underworld lifestyle. He soon paid a disproportionately high price for it. He considers his life to be a complete failure, and though he’s no longer suicidal and gravely depressed he sees himself as a grotesque freak who doesn’t have any chance to live in normal society.

Bushmaster tries to find environments where he’s not a reviled freak. His default choice is prison. If he has no other option he’s willing to commit any stupid crime and wait to be arrested. In jail, McIver doesn’t feel exposed to the revulsion of ordinary people.

The creation of the Serpent Society was a major change in his life. It was a community where people who did not generally mind his appearance or his past. He’s determined to stick with the Society no matter what, and will always loyally support its rightful leader as long as he’s treated fairly.

As a Serpent Society member he seems much better-adjusted than he was. He works like a professional mercenary, and even has an hint of slickness. He is even able to take charge when needed, and seems to be a reliable, if low-profile, NCO and associate.

However, his confidence disintegrates if he loses the social life he enjoys with the Society, at which point he’s likely to enter a depressive episode and return to prison.

Bushmaster is a generally honourable guy, and repays his debts. He’s not a hardened killer by any means, though he will fight to kill if necessary or if ordered to.

“Blast it, Diamond ! I need this job ! There’s no other way a freak like me can make a living ! Sidewinder abandoned me. Cobra’s my boss now.”

“I am certain that my colleagues and I can provide you with special services that all your agents and weaponry cannot. Satisfaction guaranteed or we forfeit our fee.”

Secondary Marvel sources mention additional abilities that are not actually demonstrated in the primary material. Since the sources were written by Bushmaster’s main writer, they’re worth mentioning.

One caption in 2011 erroneously described Bushmaster as having an extendable jaw, presumably by confusing him with Cottonmouth. 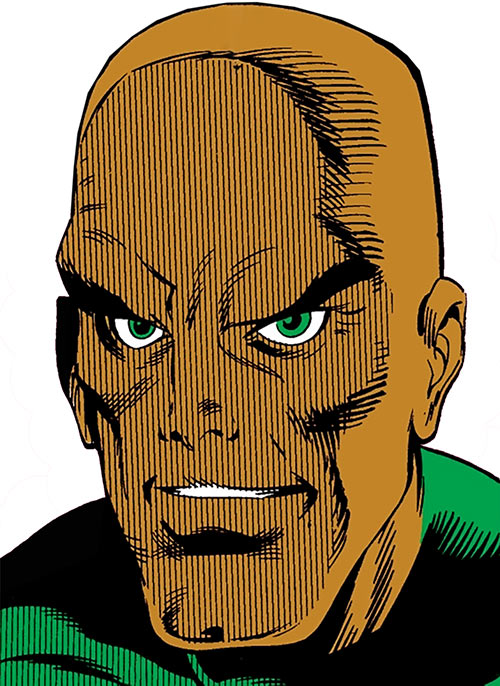 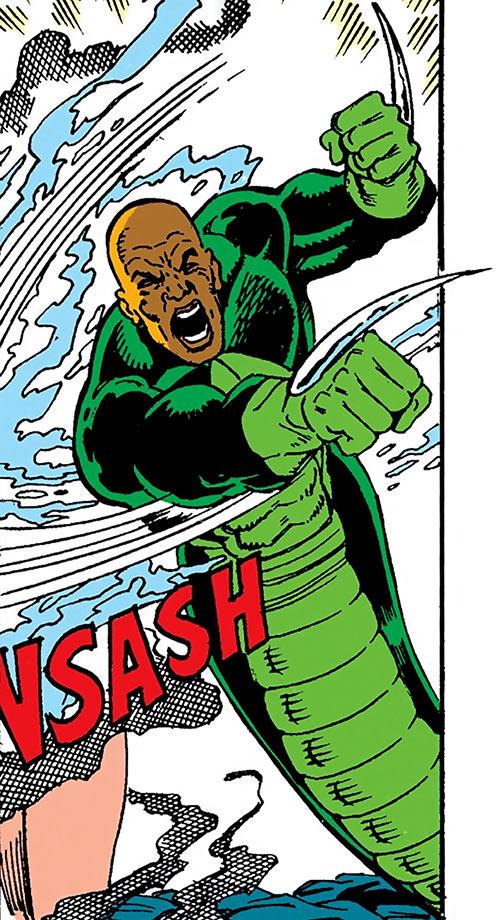 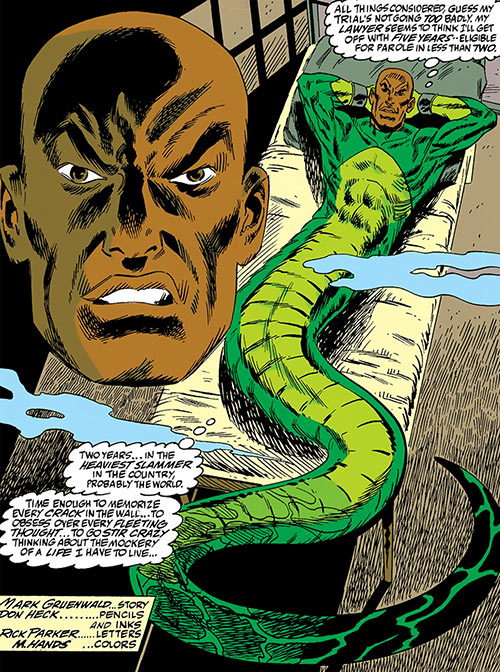 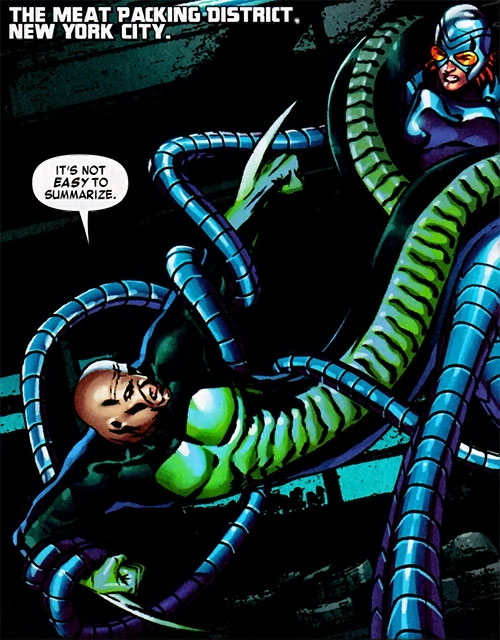 McIver before his accident : 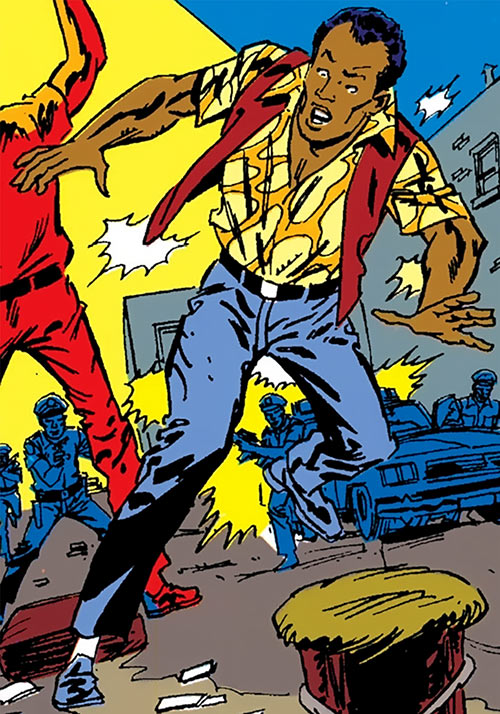