Powerpuff Girls was a superhero cartoon that aired from 1998 to 2005. The titular heroines — Blossom, Bubbles and Buttercup — are three little girls with vaguely Superman-like powers who defend a cartoon town against improbable menaces.

The show was a popular and well-reviewed one, with a distinctive style.

Buttercup is a better fighter than her sisters, and is a brutal and effective martial artist.

Blossom, Bubbles and Buttercup, the Powerpuff Girls, were created by Professor Utonium, an archetypal good-looking scientist-hero living in the city of Townsville, USA. The Professor used the traditional recipe: sugar and spice, all things nice…and Chemical X.

Buttercup is a tiny little girl, with black hair and enormous green eyes. She wears a green dress, with a broad black belt. When she flies, she leaves a green energy trail, and her energy blast, which she projects from her hands, is also green. Her Heat Vision is green from time to time, but is more usually red.

Buttercup doesn’t seem to have fingers, but this impairs her not at all.

Buttercup is one tough toddler. When faced with a problem, she will almost always resort to bloody violence. She takes things more seriously than her sisters, and spends more time frowning than the other two. She also has something of a cruel streak, and a foul temper. Just like a real five-year-old.

“Let’s beat the stuffing out of them.”

Connections:
The Mayor of Townsville (High). 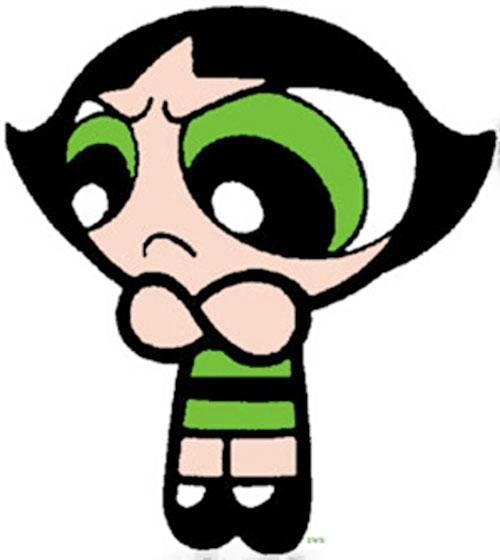 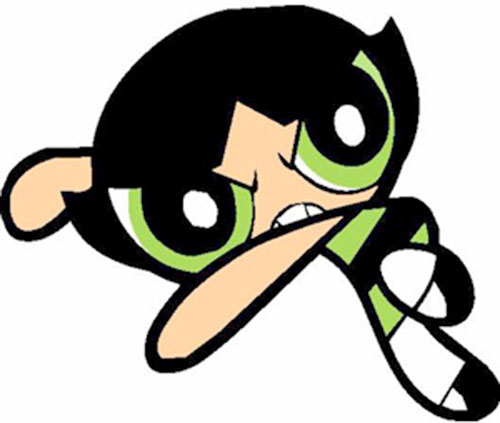