Dixon appeared in a Wildstorm comic book, Team Achilles. It ran 2002-2004. There was little material, so large chunks of this profile (say, the stats) are speculative.

But he’s a heavily-mutated military recon expert, and that mos def seemed useful.

Buzz Dixon can turn practically invisible. However, a suspicious person with remarkably good eyesight, such as Galena Golovin, can still spot him if he gets cocky. He also seems to have excellent senses, due to his composite eyes and floppy, orientable ears.

He can also “talk” silently and receive thoughts. Yet Buzz doesn’t seem to have any other telepathic ability.

Although he is invisible, Buzz can be heard by particularly perceptive persons. He breathes through his skin, which makes a very faint sound like crackling leaves.

Dixon is a former StormWatch reservist. He was seconded to Santini’s unit during the Desert Storm and Jungle Thunder military operations. During that time he and Santini became friends. Santini considered Dixon a highly reliable “gatherer of hard-to-get information”.

Santini, now the new Weatherman of StormWatch, has acquired Dixon’s services as his main intel and scouting specialist. Dixon handles all the recon work, whether pre-insertion or real time.

Buzz Dixon comes across as a cowboy type – a friendly, foul-mouthed, larger than life military cowboy type. He seems quite proud of his stealth and professionalism, and doesn’t display any apparent angst stemming from his peculiar physiognomy.

His mannerisms are also reminiscent of a friendly jarhead. He may in fact be an ex-USMC recon specialist.

“Hey ! Funny guy ! I spend four days getting close to these nutjobs and was almost caught twice. You’re a lot bigger and noisier. So you better keep your yap shut and follow my goddamn maps step by step if you want to live to see your queen’s fat ass again, you limey fuck.”

(Upon seeing the reanimator Deadhead and his army of zombies on the Project: ENTRY Earth) “Okay, whose brilliant idea was it to strand this cocksucker on a world filled with dead people ?”

Bonuses and Limitations:
Telepathy only for communication (no mental combat) (-1).

Equipment:
Buzz is often equipped with encrypted satellite radio equipment, including audio and video feed, so he can report in real time and share his point of view. How he does cartography work is unclear. Mainly because it is unclear if he has hands or something approaching hands. 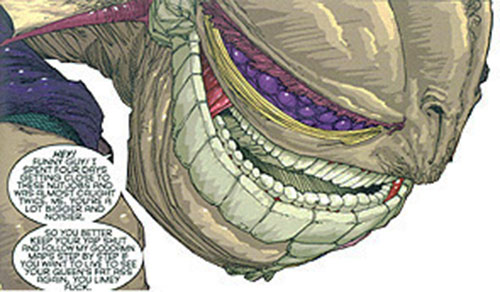