He was a Heroic Warrior, an ally to He-man, and leader of the Bee people.

His original concept was that of a spy. But he acts more as a diplomat for the Bee people.

He most often teamed with Mekaneck – who was also cast as a heroic spy.

More about the Bee people in the Denizens of Eternia article.

As a member of the Bee People, Buzz-off has their physiology. Insect wings give him flight. Both hands are extremely durable pincher-like claws.

Buzz-Off has X-Ray vision when wearing his goggles.

Buzz-off employs a short spear called an electro-shock stinger. It can be used as a melee or ranged weapon. It delivers a powerful arc of electricity. 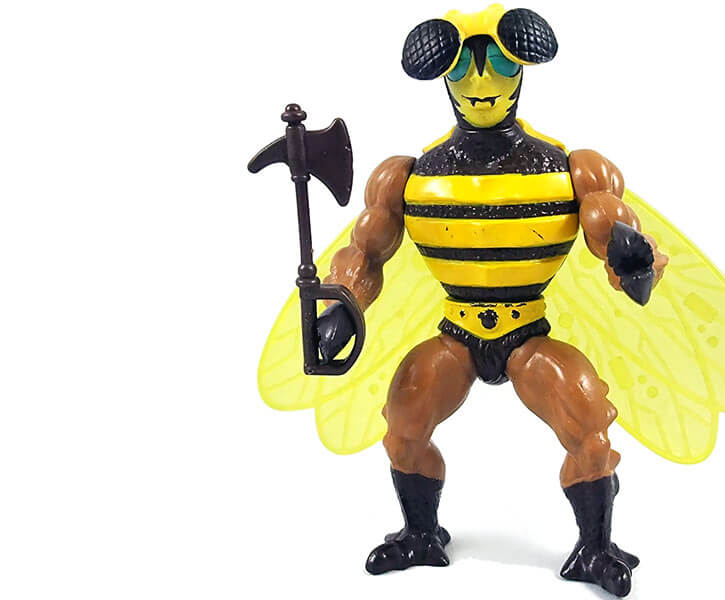 Buzz-Off was introduced as an envoy to King Randor.

He explained how many of the sea-going food transports had disappeared without a trace. Buzz-off had flown over the area and noted the existence of a small, uncharted island.

Adam and Man-At-Arms took a Wind Raider to investigate.

They initially had no luck. But upon return to the Great Eternian Dam, they found a floating island coming near the dam itself.

He-man, Man-At-Arms, Orko, and Buzz-off searched the island. They found all their ships and who was behind it. Skeletor.

Skeletor’s plan was simple. Control Eternia’s food supply and control its people. When He-man showed up, Skeletor decided to ram the dam with his island in an attempt to flood the mainland.

He-man and the other heroes disabled the island’s engines. Though Skeletor escaped, the island would serve as the new nature preserve. 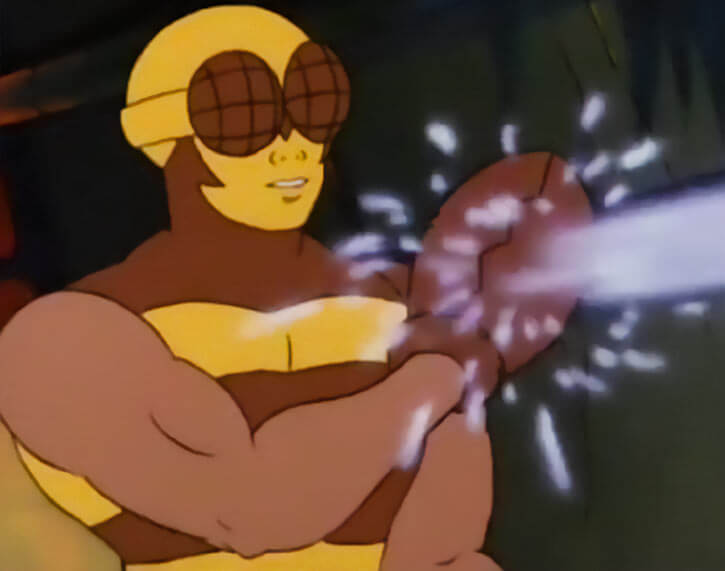 Buzz-Off teamed with Mekaneck to uncover the reason for the disappearing dragons.

The duo discovered two of Skeletor’s henchmen, Webstor and Kobra Khan. He-man joined them. The villains escaped after defeating the heroes.

The villains had been using a beam weapon to transport dragons away from Eternia – to the planet Mero. Orko accidentally activated the beam and sent both villains and heroes away.

An ancient alien race the Darmi held the dragons captive. The dragons would fight to the death in an arena for the Darmi’s amusement. He-man arrived and freed them.

Orko then inadvertently summoned Granamyr, the most ancient ruler of the dragons.

Granamyr judged the Darmi. They would be forced to fight to the death while Granamyr and his dragons watched. He-man convinced the dragons not to take this route, as it would only prove the dragons were no better than the Darmi.

The Good Shall Survive

The Bee people’s ancient enemy, humanoid wasps called Tycons, awoke. Hungry. The Tycons, once presumed extinct, had only been cocooned below ground.

Once awake they made quick work of stealing and eating the Bee people’s honey supply.

Buzz-Off was being honored at the Royal Palace. Orko teleported to the Palace and warned them of the Tycons attack on the Bee Kingdom.

Soda will kill you

Skeletor teamed with the Tycons and led them to the Bee people’s storehouse. He-man intervened but was defeated by the Tycons’ stun beams.

The Tycons went on to eat everything at the Royal Palace storehouse too. Including a baking soda pie Orko made. The Tycons thus became very ill.

Seizing on this opportunity, Man-At-Arms helped the Tycon’s stomach aches. He-man and Buzz-Off then teamed up to defeat Skeletor. 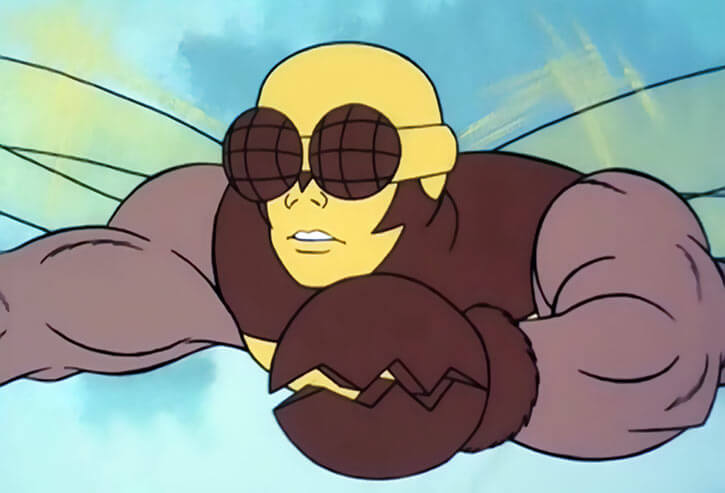 Search for a son

King Randor and Queen Marlena planned an expedition to the Evergreen forest to visit the Bee people. The Bee people intended to demonstrate the wonderful healing properties of bee pollen.

Buzz-Off noticed the King and Queen were late. He went to find out why and happened upon Teela fending off some flying creatures. Buzz-Off’s timely arrival meant Teela’s rescue from a deadly fall.

Teela and Buzz-Off rejoined the others in time to see Count Marzo defeated. 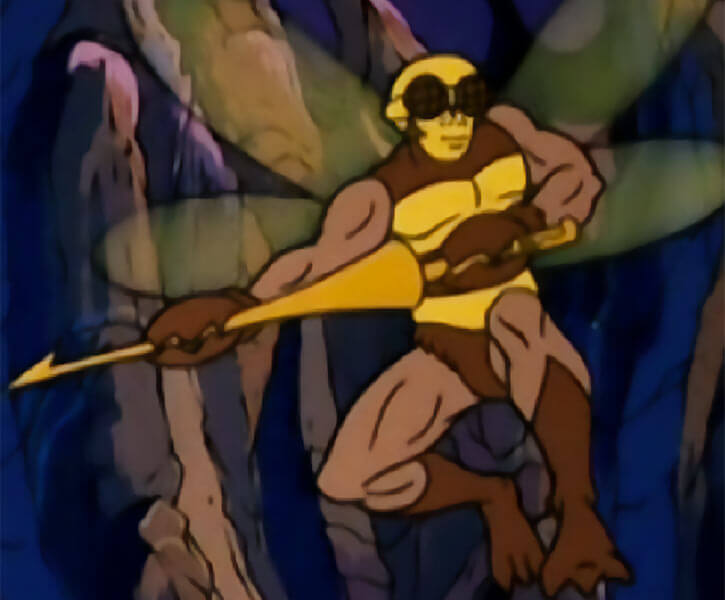 Buzz-Off is a humanoid bee. He has four insect wings on his back. Claw-like feet and yellow and brown coloring or clothing.

He precedes everything he says with a buzzing sound.

Buzz-Off is a stalwart friend and ally to the Royal Palace.

He’s good friends with Mekaneck and they work well together.

He takes it upon himself to care for his people. In turn, his people want to do their tasks well so Buzz-Off will be proud of them.

(When King Randor and the Queen are running late)
“ZZZZ, strange they should be so late. I’ve had a funny feeling in my antennae all day. ZZZZ, perhaps I should see if everything is alright.”

Buzz-Off is a generic bee themed hero. He should fit nicely alone or with his people if they too are included in the DCU. 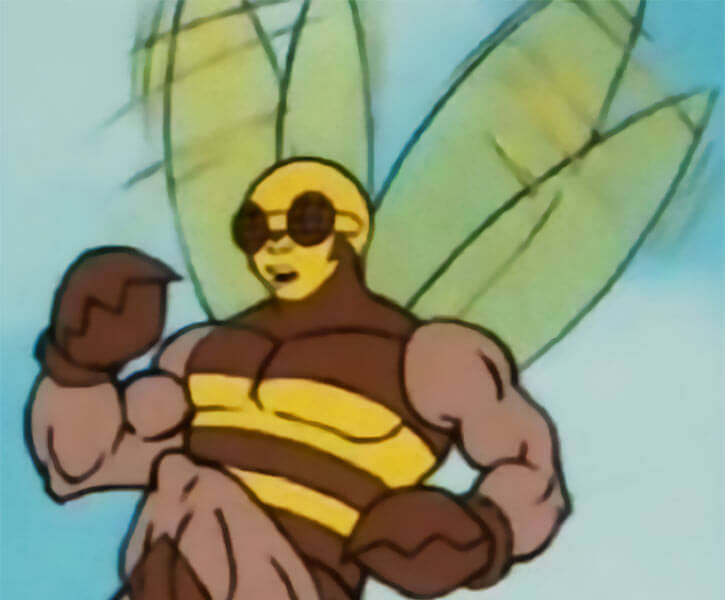 A 392 points Character (without equipment).

Leader of the Bee People. 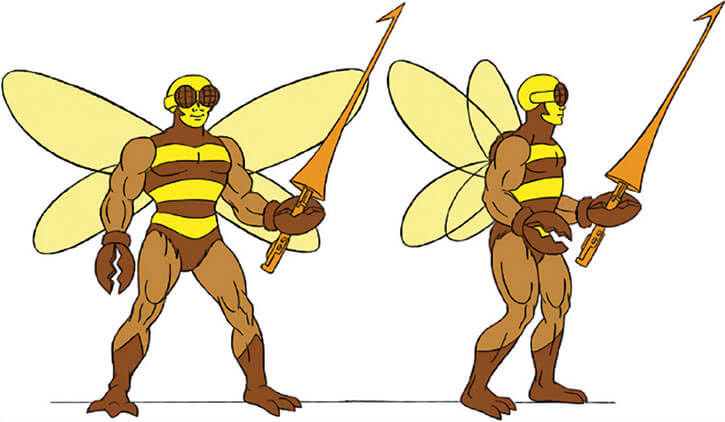 As far as I could tell the bee people had no coin. No money. But they did have resources and a kingdom of their own. So, a wealth score would be hard to nail down with any certainty.

Also, Buzz-Off’s action figure came with a brown axe. It wasn’t seen in the cartoon, but if you want him to have one:
Axe [BODY 05, Enhance (EV): 02 (cap is 07), Descriptor: Slashing, Recommended STR 04].
When attacking a shield, a battle axe receives a +1 to its final roll total. When attacking a person without body armour or a shield, the roll receives a -1 to its final roll. 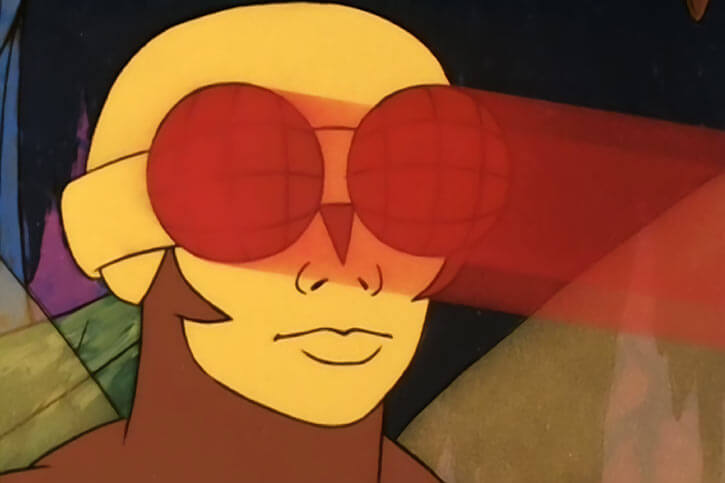 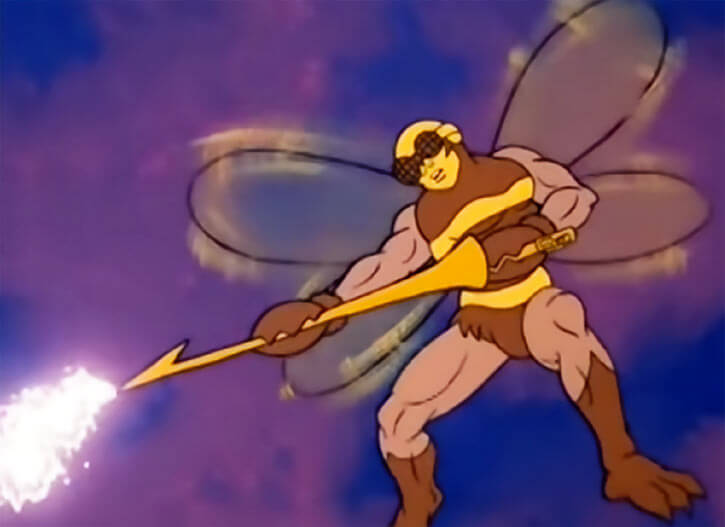 Source of Character: The 1983/1984 animated series He-Man and the Masters of the Universe episodes “Island of Fear”, “Disappearing Dragons”, “The Good shall Survive”, and “Search for a Son”. Voiced by Alan Oppenheimer.