Cadaver is, as the name implies, an animated corpse. It seems to be very strong. It also demonstrated a high degree of mobility and coordination, somewhat similar to a professional swordsman.

Its exact levels of strength, durability and martial proficiency were never clearly demonstrated. But it was able to walk through eldritch assaults of considerable magnitude (albeit not to withstand blasts from Strange), and to kill animated stone gargoyles with its bare hands.

The Pale Horseman appears to have been a sort of contingency spell. It triggers when the Moebius Stone, once shattered by Agamotto as they were too dangerous, are reassembled. The spell animates and enchants the nearest suitable corpse, and possesses it with the Horseman personality. However in Fleischer’s case, the latter did not stick.

It is entirely possible this is the ’standard‘ fail-safe Agamotto uses to secure resources important to him. But it is unknown whether several ’copies’ of the Horseman may exist simultaneously. It was implied that Cadaver stayed animated after the Moebius Stone was destroyed due to some mystical manipulation on Druid’s part.

It is also quite possible Druid’s mystical monkeying with the enchantment is what caused Cadaver to believe it was Cody Fleischer for a time.

Its signature weapon is the Sword of Bone. It is a bastard sword made of jagged bone. Cadaver “unsheathes” the blade by driving its hand within its own chest, and ripping out one of its ribs. That’s a disgusting sight, accompanied by ghastly sounds and spurts of grey-greenish ichor.

The rib then transmogrifies  into a sword, surrounded by a thin layer of pale blue aetheric fire.

The Sword of Bone is a devastating weapon, capable of cleaving through practically everything. It can easily shear through thick, solid stone and could even wound the Hulk or Namor.

Few people can control or even hold the Sword of Bone, not even Strange. In DC Heroes RPG terms this is the very high APs of Security Systems – although the Cognoscenti could ’hack‘ it when the three of them were united.

The “security systems” will not oppose a clear, direct, brief attempt to return it to Cadaver’s grasp. This may mean some level of sapience  on the Sword’s part.

Cadaver can sheathe the Sword of Bone back within its ribcage, where it becomes a normal rib again. The sword can even be used to cleave crevasses and eventually tunnels through the earth. When swung against the ground, it creates a hole not unlike that of a cratering bomb.

Cadaver also demonstrated the ability to regenerate even extensive damage when holding the sword, surrounding itself in the same aetheric fire that engulfs the Sword of Bone when it uses it.

Cody Fleischer was a teenager from Seattle. He did not consider himself very successful and seemed somewhat depressed and socially unskilled. Not having girlfriends or much of a life, he and his two friends would often spend their Saturday nights in a desert cemetery to drink beers in peace. In 1994, this habit proved fatal.

The sorceress Malachi was tracking down the scattered fragments of a mystical artefact called the stone of Moebius. She found that the last such fragment was still on the finger of a dead man buried there, worked into a ring. She approached the group of youths, who were hanging around on the steps of the very grave she was looking for.

At this point, Malachi was rapidly ageing and needed to renew her vitality. As a result she grabbed Fleischer and kissed him, draining his years of life left. Within less than a minute, Malachi was fully rejuvenated and Fleischer was a desiccated corpse.

However, when Malachi reassembled the full artefact despite the opposition of the Secret Defenders, something odd happened. A ball of energy shot out, plunged onto the corpse of Fleischer and was absorbed by it, reanimating it as a zombie. The resultant creature called itself the Pale Horseman of Agamotto.

Along with two mercenaries hired to join the Secret Defenders (Cage and Deadpool) it fought through Malachi’s animated stone servants and reached the sorceress. But at this point Fleischer’s personality, with its full memories, reasserted itself, leaving him confused as to what he was and what was going on.

Malachi defeated Cadaver using the full power of the Moebius Stone, then used it as a shell to conjure her dead lover. But she was then was defeated and the Horseman/Fleischer reasserted itself.

At this point the Strange entity (an aspect of Stephen Strange, the Sorcerer Supreme, known for its obsession with owning all earthly magics) swept in to recover the Stone. The Horseman/Fleischer called him a traitor (since Strange had at that point severed his contacts with the entities and principalities, including his Vishanti patrons) and attacked him, to no avail.

On the other hand Strange did not manage to abscond with the Sword of Bone, which rebelled at his touch. Druid also managed to unmake the Stone so it would not fall into Strange’s hands.

Cadaver and another undead construct with the personality of a living person, Shadowoman, stuck with Druid, becoming permanent Secret Defenders. They helped confront the villain Swarm (along with Dr. Pym and Iron Fist), after which Cadaver returned to Seattle in an attempt to resume its “life”.

Suspecting on some level those attempts would be in vain, but refusing to admit it, it handled them absolutely miserably.

After terrifying one of Cody’s friends it confronted Cody’s father. The old man had a heart attack at the sight of the undead claiming to be his son. After calling an ambulance, Cadaver sneaked out and decided to return to the Secret Defenders, riding south to San Francisco on a stolen motorbike to answer a summon from Druid.

It arrived in time to save Druid and his “hypnotically convinced” agent, Spider-Woman (Carpenter).

Druid then assembled further Secret Defenders – Dagger, Deathlok and Drax. Then, along with Cadaver and Sepulcre, he worked on countering the return of Slorioth, a demon banished 15,000 years before but who was now coming back. The mystical wards erected back then by a cabal of ancient sorcerers opposing Slorioth were weakening.

Druid helped draw in Slorioth with the help of the statuette and his three new agents, so he could be fought directly.

This foolish decision resulted in the destruction of the remaining wards and the opening of a direct conduit to Slorioth’s dimension. This forced mystic defenders the Cognoscenti to intervene. The Cognoscenti conjured most of the founding Defenders (Namor, Hulk and the Silver Surfer) from the time stream to oppose the Secret Defenders.

The power-mad Druid ordered his agents to fight the Cognoscenti’s agents. He then entered Slorioth’s dimension, intending to take the demon’s tremendous power for himself. However, Slorioth proved even more powerful and intelligent than Druid thought, and could not be contained.

The demon sent the dark side of Druid’s soul to confront Druid. Said dark side considerably strengthened by :

After defeating Druid, Druid’s dark side finished opening the passage and unleashed Slorioth. It manifested as a gigantic, incomprehensible, Lovecraftian monstrosity from a higher dimension.

The powerful group of heroes fought hard against the thing man was not meant to know . But even their efforts proved futile and reality began to unravel. Her shadowy substance being related to Slorioth, Sepulcre was absorbed into the creature when she came too close. As to Cadaver, he was losing its struggle against the innumerable tentacles growing from Slorioth’s body.

The Cognoscenti then grabbed Sepulcre and Cadaver in order to make their next move. Not being alive, both would be able to enter Slorioth’s dimension without being destroyed. The Cognoscenti considered them to have been misled and manipulated by the power-mad Druid, rather than evil.

At this stage, Druid was entirely subsumed into his evil side. He had joined it to form a single entity as a servant of Slorioth. Blaming Jillian as the cause of his contact with Slorioth and subsequent corruption, he destroyed her, then blasted Cadaver into goo as he attacked it.

However, this bought time for the Cognoscenti to summon the Vishanti. The Vishanti then summoned the Living Tribunal to deal with Slorioth without destroying the planet.

In the aftermath, Agamotto reformed his Horseman. Agamotto needed a servant in this dimension – Strange and the Vishanti being still estranged at that point. Agamotto announced that he would soon draw Cadaver into the mystical War of the Seven Spheres, an otherdimensional conflagration between principalities that would last for 5,000 years.

Cadaver reacted with great frustration. The Cody side of its personality expressed its wish to pass away and be done with it.

What happened next to Cadaver is unrevealed. While the War of the Seven Spheres did take place and ran its predicted duration, it amounted to a few months in terms of time in the Earth dimension.

The Initiative has a file on Cadaver, so it is entirely possible that it came back from the War and did not get the final rest it wanted from his masters the Vishanti (or maybe he changed its mind).

While he was living, Fleischer had blond hair style in a way reminiscent of the late Kurt Cobain during the Nevermind era.

After the first few hours or days, things settled thus. Normally, Cadaver has Cody’s personality as a slightly introverted, slightly lazy, somewhat bored teenager who is forced to live outside of normal society due to his ghoulish appearance. Most of the time, he watches TV, and he has no special insight into the occult and/or the extraordinary.

But this is but the shell of Cody’s mentality. Fleischer is dead and his soul has departed when Malachi killed him. Cadaver knows it’s not actually Fleischer, but since it has Cody’s full memory and personality the difference is academic to him.

The Horseman taketh over

As his stress level rises, “Cody” increasingly takes on the Horseman’s personality. It starts using older, more sophisticated words (Cody would never say think like “I shall tear this obstacle asunder”, “the creature’s mass discorporates into a million minute organisms !” or “let nothing bar our path”, which is how the Horseman talks).

It also acquires incredible determination – in particular in letting no obstacle or opposition stand between himself and his goal. When it goes in action, Cadaver is absolutely relentless, perhaps even maniacal, and seems impossible to tire or halt. It will charge through and destroy the opposition or obstacles, and simply not stop.

Cadaver seems to generally be inclined toward heroic acts. Furthermore it was never seen killing actual people (as opposed to mystical constructs, which he will shatter left and right). Since there is no special reason for the Horseman to act like this, this is probably Cody using his might for what he thinks is the right thing.

It has no qualms using unethical means for the greater good, though, such as stealing a motorbike from a passing cyclist to answer a summon.

Unlike Cody, the Horseman seems familiar with the occult and the supernatural.

(After its reanimation, as the Horseman) “The will of Agamotto is challenged ! Let the weapon be drawn ! As one Almighty fashioned woman from man’s rib – so will the instrument of vengeance be forged from the stuff of my body ! What once was sundered must remain in twain ! The Pale Horseman stands ready to carry forth Agamotto’s judgement !”

(To a gargoyle hitting him in the head with an axe) “Foolish non-entity ! You cannot kill that which is already dead !”

“Defiler ! No power you unleash against me can keep me from my charge ! I will see the stone set asunder !”

“The Sword of Bone ! Once more, its flames fairly sing in my grasp !”

Bonuses and Limitations:
Magic Field is Self Only.

Bonuses and Limitations:
Skills can only be used in stressful situations, when the Horseman is manifest enough. 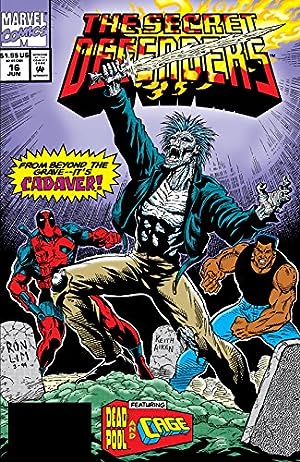 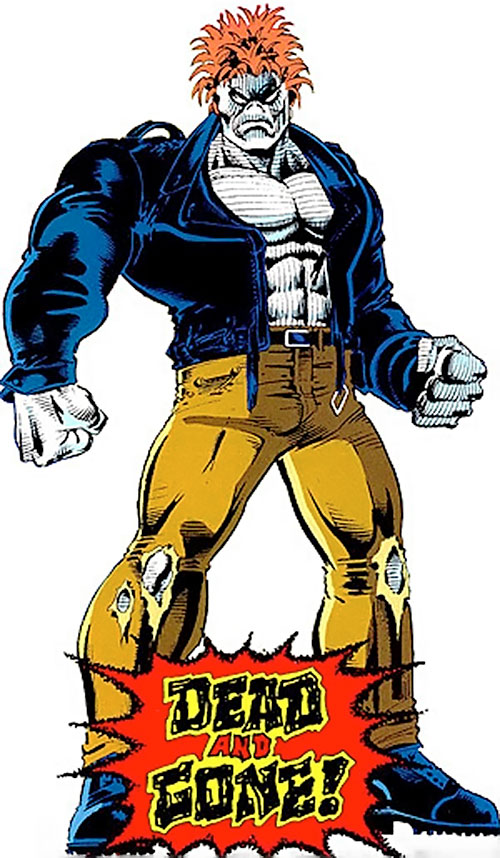 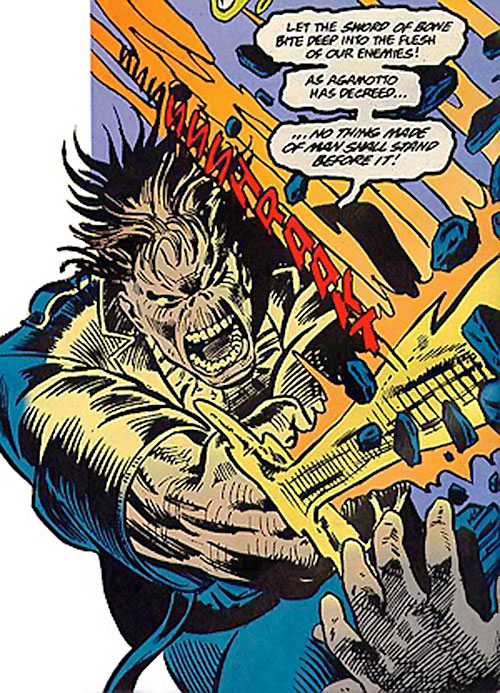 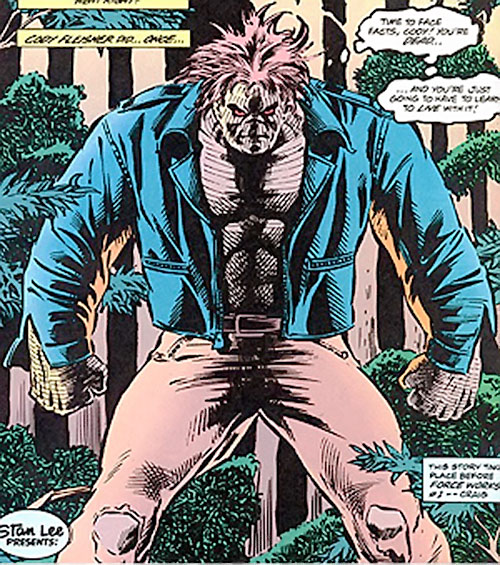 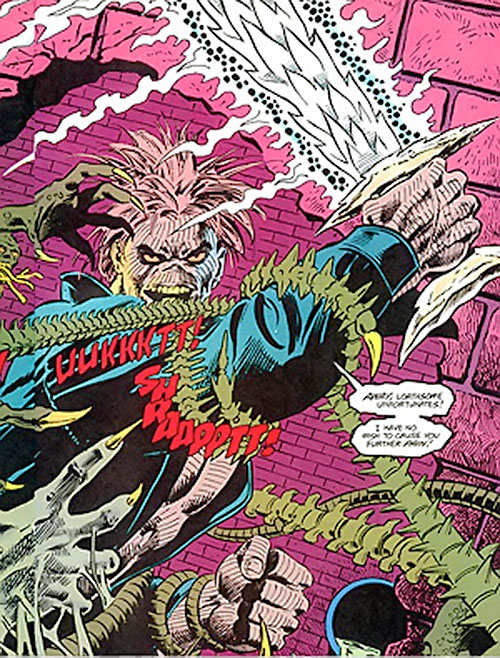 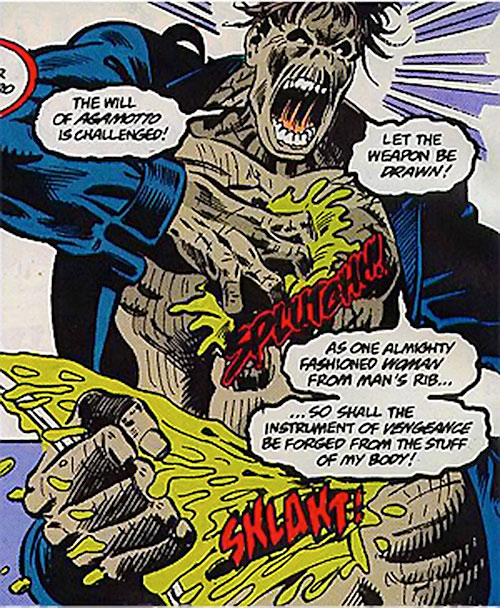 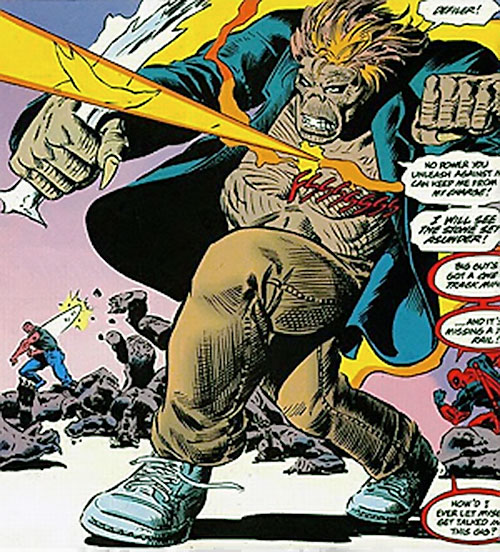 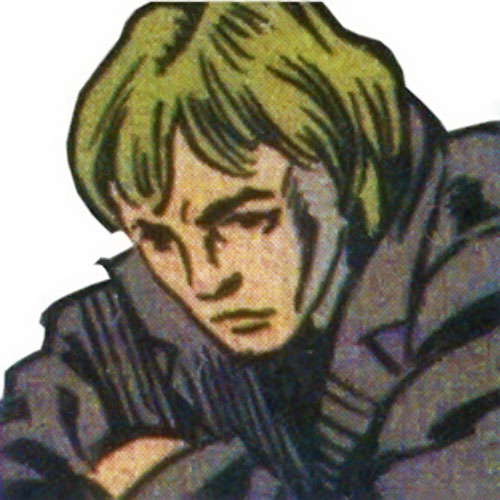