Calamity has been enhanced so he can move on his prosthetic legs as well as if they were natural. He can move at speeds in excess of 200 mph, taking down a dozen enemies in seconds with little bother.

(A general history of his time with the Order can be found in the team entry.)

James’s father played baseball for the Hanshin Tigers . After retiring from the game he moved to San Diego so James could attend Rancho Bernardo High School . More professional ball players came from that school than anywhere else. 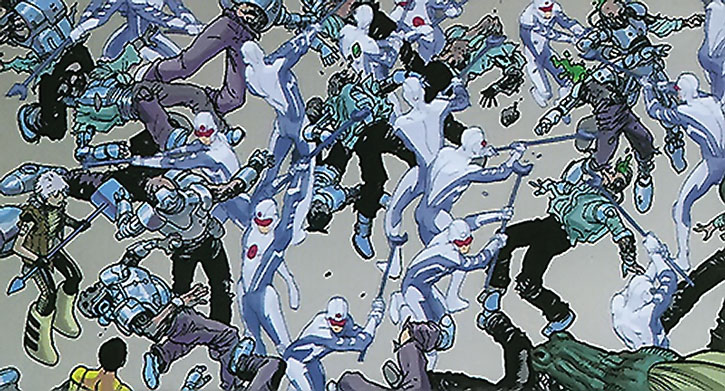 Despite his interest in engineering, James developed a love of baseball after his father took him to see a Hanshin Tigers game. His natural athleticism saw him excel at the sport, and he ran track and field as well as playing ball at Louisiana State University.

So many lives destroyed that way

Driving from a State Final meet his car was hit by a drunk driver. James lost his legs and his dreams of being a professional athlete.

Turning his attention fully to engineering, he designed the Calamity-brand Cheetah Prosthetics. These made him a millionaire by 22.

When the opportunity arose to gain superpowers, and regain more of his mobility, he seized it. Thus, James was in first wave of applicants accepted for the Order. When a number of his team mates went partying, he demurred. As a result was the only one of the non-command staff to remain after the others were dismissed.

During the clash with the prototype Soviet super-soldiers, Calamity was sent to the former Soviet listening post island where they’d been kept suspended. There he found the trio of unconscious soldiers controlling them.

He was unable to bring himself to kill them, and Supernaut had to come to do it for him.

His inability to kill when necessary began to get to him. He lost his temper in one fight against the zobos, taking a dozen down in seconds, against orders. Anthem told him to take the day off to get his head together.

Using the Order computers, he tracked down the drunk driver who’d crashed into him years ago, Carl Crenshaw. Locating him, James found him sad and broken down, wracked with guilt over the accident, and befriended him.

Determined and professional, James can lose his temper when stressed. But it’s usually in a controlled manner.

Now he’s recovered mobility with his powers, he can tend to get frustrated when he loses it again.

“Want to see the fastest thing you’ve ever seen ?”

Bonuses and Limitations:
Superspeed cannot substitute for his Flight speed (-1).

Drawbacks:
SPR (Missing bottom half of legs), Limelight, Power Loss (All Powers are neutralized should he become drunk), Public ID. 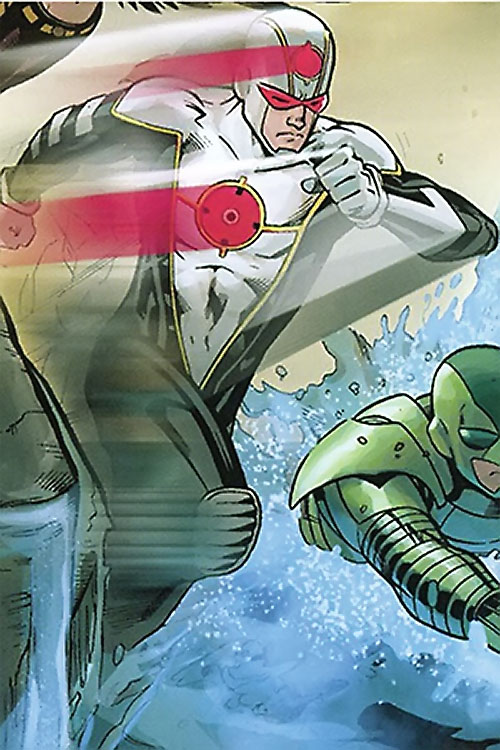