This is the pre-Crisis Calorie Queen. She only appeared once — in 1975 — so some stats are speculative.

She was revived as a minor supporting character in the “Five Year Gap” timelineUsed here in the sense of an alternate history, where events unfold differently (post-Crisis, but pre-Zero Hour, for those keeping track), where she has a couple of appearances. Those stats are a little different (she’s smarter, stronger, and more experienced), so there’s a separate writeup for that version.

That makes three writeups for Calorie Queen, which is pretty good since that’s about how many appearances she has.

Like all Bismollians, Taryn has the ability to eat matter in all forms, however durable or toxic. This is because her Bismollian physiology converts matter to energy (in DC Heroes RPG terms Claws, Sharpness, Systemic Antidote).

In normal Bismollians, most of that energy dissipates harmlessly. But the treatment devised by Taryn’s father channels a bit of that excess energy into her muscles, making her as tough as three normal men (STR, BOD). 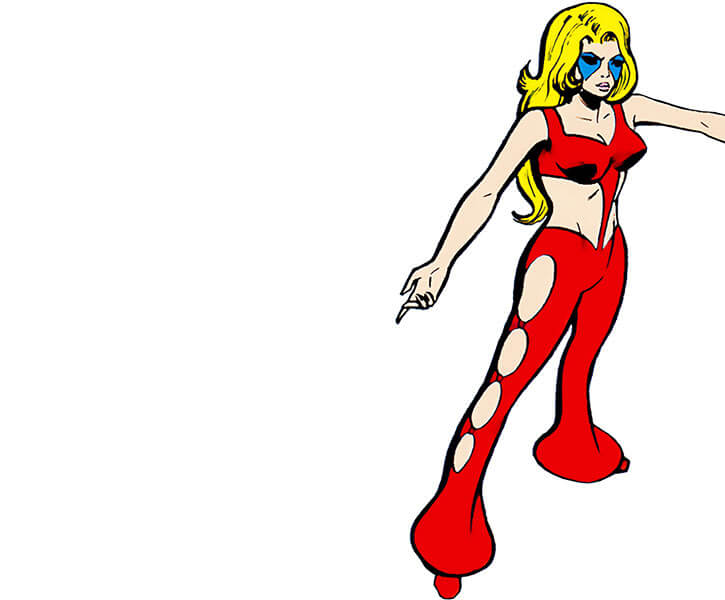 Taryn Loy is the daughter of Bismoll’s most famous atomic scientist.

He’s the man who devised a process to give Bismollians superior strength. So far as is known, the only Bismollian who has been exposed to this process is his daughter Taryn.

Taryn decided to travel to Earth to try-out for membership in the Legion of Super-Heroes as Calorie Queen. She was rejected on the grounds that she had no unique super-power, a requirement for all applicants except Superboy and Supergirl.

Her matter-eating ability was duplicated by long-time Legionnaire Matter-Eater Lad, and her strength was far below the levels of the truly super-strong Legionnaires.

Disgruntled, Taryn joined a group of four other recent rejectees who, like her, had been passed over because their powers duplicated those of current Legionnaires.

They challenged their LSH counterparts to a duel, hoping to prove their superior worth and take their places in the LSH.

It’s not clear which of the six rejects devised this plan. But Taryn seemed to be a leader of the effort. She actively helped recruit Magno Lad as their sixth member. 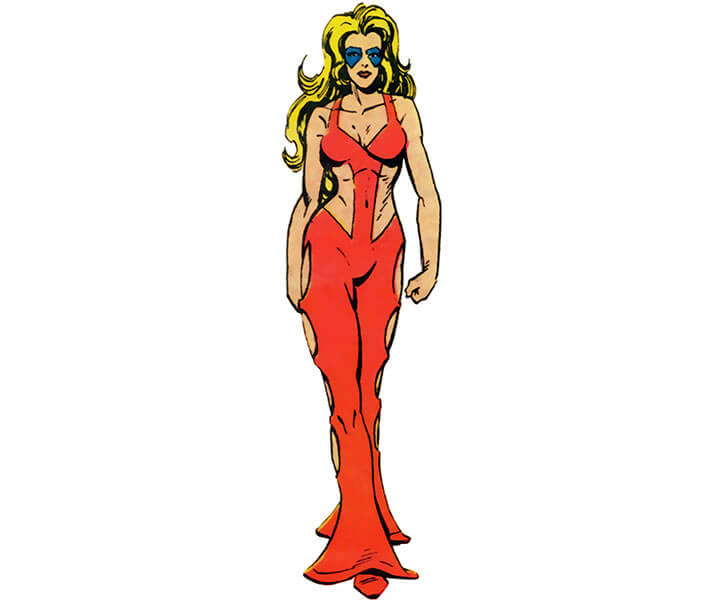 The Rejects showed up at LSH HQ and issued their challenge. But the Legionnaires declined to participate in a childish grudge match.

Calorie Queen and the others attacked anyway, and she decked the unprepared Matter-Eater Lad. The battle was quickly stopped by Superboy, but to prove a point, the six challenged Legionnaires agreed to a rematch the following day.

When the Rejects arrived, it became apparent that whatever superior powers or strength they might have had paled before the skill and teamwork of the Legionnaires. As such, the Rejects were quickly defeated and once more were summarily rejected.

Ironically, at the conclusion of their battle, Matter-Eater Lad received word that, according to Bismollian law and custom, he had been drafted to run for political office on his homeworld. Accordingly, he was forced to resign from the LSH.

He gallantly recommended to the Legionnaires that they admit Calorie Queen as his replacement, stating that she was “quite a gal”.

For unspecified reasons, the LSH declined to do so.

(It’s difficult to avoid the conclusion that the Legionnaires wondered why they’d ever admitted someone with Matter-Eater Lad’s power in the first place, and felt no particular urge to replace him).

Three of the Rejects (Esper Lass, Magno Lad, and Micro Lad) later went on to join the Legion of Super-Villains. They took their resentment of the LSH to very dangerous levels.

The fate of the other three Rejects has never been shown. Secondary sources  indicate that Calorie Queen, Chameleon Kid, and Phantom Lad returned to their homeworlds.

Calorie Queen either declined to participate in the LSV or, as seems more likely, was never approached by it. Rumor has it that she went to work for the Bismollian geologic reclamation project.

Calorie Queen is a fit, curvy blonde in a daring red outfit.

She has the disco inspired look that is typical of Legion stories from her era (the mid 1970s).

She has some kind of face paint or partial mask that resembles the Dazzler (Alison Blaire)’s classic look.

Calorie Queen is bold and forceful. She was also extremely flirtatious with Magno Lad, but it’s unclear whether this was a genuine expression of attraction or a tactic to get him on her team.

Some secondary sources indicate that Taryn’s scientist father pushed her into becoming a chronic overachiever, both in sports and in academics.

The fact that he used an experimental strength-boosting process on her lends some credence to those reports. If so, her seemingly arrogant behavior may have been fueled by a need to please her father and avoid reporting that she’d failed to achieve Legion membership. 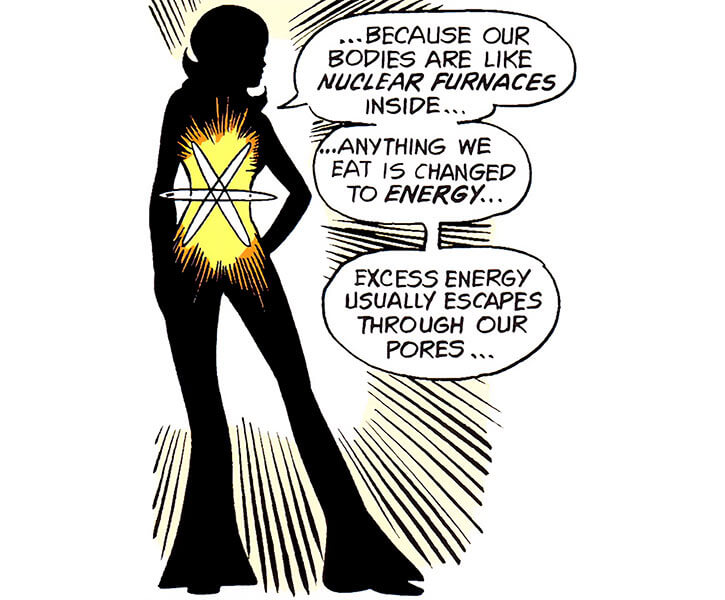 “Relax, handsome ! All we want you to do is help us put the whammy on six Legionnaires !”

“There ! I’ve proved you’ve no right to represent Bismoll in the Legion ! You should be replaced by Calorie Queen !”

As noted above, Calorie Queen is a minor supporting character in the divergent “Five Year Gap” timeline. There, she’s employed as senatorial aide to ex-Legionnaire Tenzil Kem. She later becomes a Senator herself.

In my own timelines, I can’t help but wonder what would’ve happened if the LSH did decide to give her a chance. Especially if Brainiac 5 took a look at her father’s process and made some improvements to it.

Loss Vulnerability (If she somehow lost her Sharpness Power she would also lose the top 3 APs of her STR and the top 2 APs of her BODY), MIA toward joining the LSH and showing up Matter-Eater Lad. 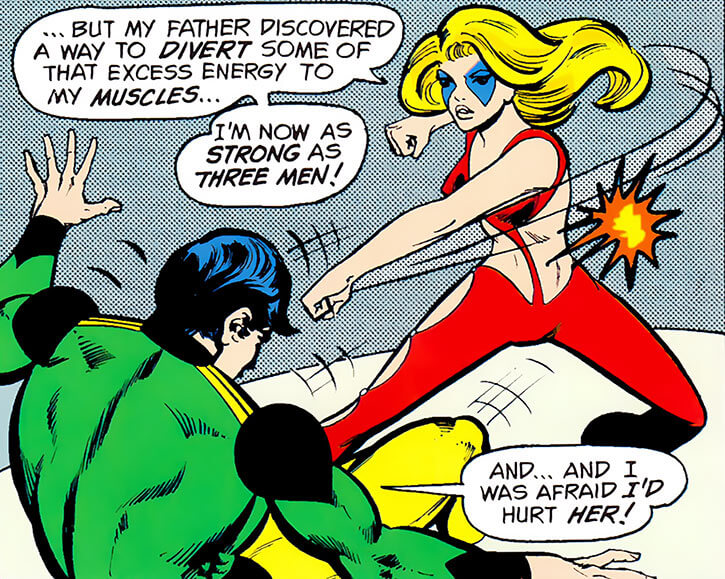 With not too much to go on, I’ve decided to interpret it as three strong but not exceptional men, around STR: 03 each.

Tripled via AP math, that gives her STR: 05 — significant, and a full Column higher than Matter-Eater Lad. But nothing earth-shattering. This matches her observed performance.

That may be accurate for the post-Zero Hour timeline, as that era’s Tenzil Kem had acid spit (which is cool). But it’s not accurate in the pre-Crisis period, where their unique digestive processes convert matter into energy.

I was originally tempted to represent this ability with Disintegration. Legion fans have long pointed out that the laughable ability to eat anything is a potentially deadly power, similar to the disintegrating touch of Mano of the Fatal Five.

But in the end, it was best represented by a combination of Claws and Sharpness. See the special section below for more on this. 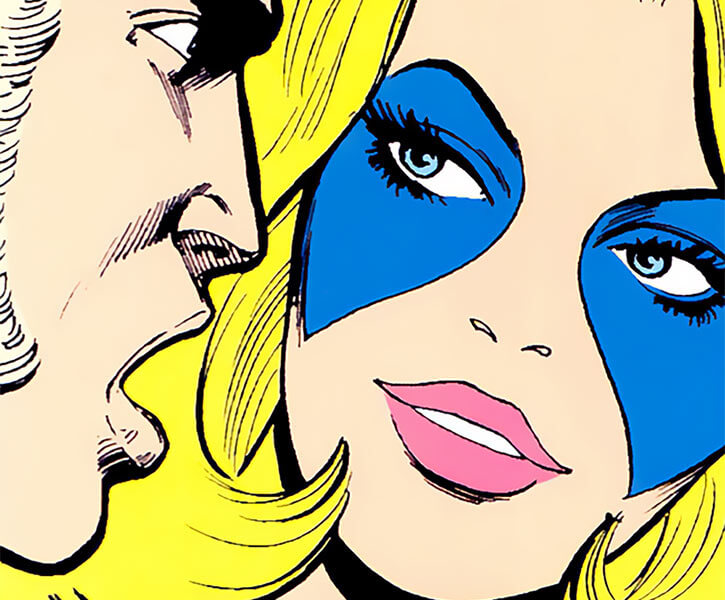 Calorie Queen? Matter-Eater Lad?!? They can EAT ANYTHING???!? And they’re from the planet BISMOLL!??!?!? As in Pepto-Bismol, which provides relief from upset stomachs?

Obviously, these characters are not intended to be taken very seriously.

Bismollians in Legion stories never really use their power to hurt anyone. Eat prison bars, check. Eat a tunnel through the earth? Sure. Chomp a goon’s gun before he can fire it, while leaving said goon’s hand untouched? You betcha. Save the universe by devouring the Miracle Machine, cutting off Omega’s source of power? Ok.

Bite off the android Pulsar Stargrave’s nose? This is the only time a Bismollian has bitten another character, and it was in the Legion of Substitute-Heroes’ April Fool’s Day Special!

In the comics, their power has been a joke, and setting specific AP levels based on the stories is therefore tough. A Bismollian can pretty much each anything. How much damage they could do by biting another character is something of an open question.

But in a role-playing game, it may be inevitable that someone wants to have Calorie Queen try to take down Superman. Or send up Matter-Eater Lad as the ultimate weapon against Superboy-Prime.

The stats above are designed with this potential situation in mind.

With the combination of Claws and Sharpness, a Bismollian can score RAPs against just about anybody. But a single bite won’t be fatal for most. With a Trick Shot, the Bismollian might get a finger (or a nose).

Even if you go this route, remember that these are goofy, light-hearted characters, not grim‘n’gritty 90s era combat monsters. (One does shudder at the thought of a Bismollian Hannibal Lecter, though.)

One other point. For a human, biting someone who is trying to avoid it is presumably much tougher than hitting or kicking them.

In the stories, though, Matter-Eater Lad is constantly biting guns out of goons’ hands (a Trick Shot already requiring an AV penalty), so the AV penalty for biting can’t be too great.

Following that precedent, I’ve only given Taryn a -1 CS penalty to her AV if and when she tries to bite someone.