When it comes to character history and personality, I’ve treated the 2995 LSH Sourcebook as almost equal to a primary source  on par with the comics, since it was written by two of the then-current LSH writers.

Like all Bismollians, Taryn has the ability to eat matter in all forms, however durable or toxic. Her Bismollian physiology converts matter to energy. In DC Heroes RPG terms that’s Claws, Sharpness, Systemic Antidote.

In normal Bismollians, most of that energy dissipates harmlessly. The treatment devised by Taryn’s father channels a bit of that excess energy into her muscles, making her super-strong. Taryn is also a very capable hand-to-hand combatant and a veteran politician with lots of contacts.

Taryn Loy is the daughter of Bismoll’s most famous atomic scientist. He’s the man who devised a process to give Bismollians super-strength. So far as is known, the only Bismollian who has been exposed to this process is Taryn.

Taryn travelled to Earth to apply for membership in the Legion of Super-Heroes as Calorie Queen.

She was rejected on the grounds that she had no unique super-power, a requirement for all applicants except Superboy and Supergirl. Her matter-eating ability was duplicated by long-time Legionnaire Matter-Eater Lad, and her modestly enhanced strength was far below the levels of other super-strong Legionnaires.

Disgruntled, Taryn joined a group of five other recent rejectees. Like her, they had been passed over because their powers duplicated those of current Legionnaires. They challenged their LSH counterparts to a duel, hoping to prove their superior worth and take their places in the LSH.

It’s not clear which of the six rejects devised this plan. But Taryn seemed to be a leader of the effort and actively helped recruit Magno Lad as their sixth member.

The Rejects showed up at LSH HQ and issued their challenge. But the Legionnaires declined to participate in a childish grudge match. Calorie Queen and the others attacked anyway, and she decked the unprepared Matter-Eater Lad. The battle was quickly stopped by Superboy. But to prove a point, the six challenged Legionnaires agreed to a rematch the following day.

When the Rejects arrived, it became apparent that whatever superior powers or strength they might have had paled before the skill and teamwork of the Legionnaires. As such, the Rejects were quickly defeated and once more were summarily rejected.

Ironically, at the conclusion of their battle, Matter-Eater Lad received word that, according to Bismollian law and custom, he had been drafted to run for political office on his homeworld. Accordingly, he was forced to resign from the LSH.

He gallantly recommended to the Legionnaires that they admit Calorie Queen as his replacement, stating that she was “quite a gal”. For unspecified reasons, the LSH declined to do so.

(It’s difficult to avoid the conclusion that the Legionnaires wondered why they’d ever admitted someone with Matter-Eater Lad’s power in the first place, and felt no particular urge to replace him.)

Three of the Rejects (Esper Lass, Magno Lad, and Micro Lad) later went on to join the Legion of Super-Villains. They their resentment of the LSH to very dangerous levels.

She proved to be intelligent, hard-working, and effective. Over a period of several years, she became one of the most influential behind-the-scenes figures in Bismollian politics. Loy was responsible for most of Senator Kem’s accomplishments.

Tenzil, who had no desire to be a politician, went out of his way to be irresponsible and irreverent. This had the unintended side effect of making the public love him and continue to re-elect him. Taryn, who seemed to be amused by Tenzil’s antics, meanwhile made sure that good legislative work got done.

At some point she married Fungul Loy, vice-chairman of the influential Igneous Bismollian Party.

Taryn accompanied Tenzil back to Earth years later, after the Legion had disbanded and Earthgov had become despotic. As Tenzil’s aide, she assisted in winning the freedom of Ex-Legionnaire Polar Boy (Brek Bannin), who was a political prisoner.

Tenzil, Taryn, and Brek quickly left Earth. They were en route to Winath (where the LSH was slowly re-forming) when they were abducted by Prince Evillo of the planet Tartarus. Evillo’s intentions were mostly benign — he’d acted at the behest of his two daughters, who idolized Brek and simply wanted to meet him.

Things began to escalate when Evillo, attracted to Taryn, attempted to force his suit on her. He was unprepared for her strength, and she easily repelled his advances. Tenzil nevertheless intervened, and Evillo blasted him into a hell dimension.

The opposition party on Bismoll took advantage of the situation to have Tenzil declared dead, vacating his Senate seat. Taryn ultimately became senator in his place.

When Tenzil returned, both he and Taryn were satisfied with the turn of events. Taryn finally got to be senator in her own right. And Tenzil had the opportunity to return to the LSH.

Taryn is now one of the fastest rising stars in Bismollian politics, described as a whirlwind of activity and accomplishment.

Taryn is not a would-be superhero anymore, so she doesn’t wear her Calorie Queen costume. She’s maintained her physique, though, and remains an attractive blonde who, in ordinary life, still wears fairly daring clothing.

In public appearances she dresses much more conservatively in a business suit or a modest dress, appearing reserved or even matronly.

Taryn is bold, forceful, and dedicated. But though a hard worker and chronic over-achiever, she also has a sense of humor and perspective. She has obviously developed a friendship with Tenzil Kem, with the two of them joking frequently. Tenzil generally calls her “Cal” rather than Taryn.

Taryn’s youthful dream of being a super-hero and Legionnaire is long faded. She believes in the power of politics to help ordinary people, and was dedicated to assisting Tenzil when he was forced into the job of senator.

It soon became clear that politics was her calling. She clearly wished to have the job in her own right. When circumstances made that possible she eagerly took Tenzil’s place, which was what they both wanted.

Nothing has been shown of her relationship with her husband. But there are indications that he is not pleased with the positions (political and otherwise) that Tenzil and Taryn took over the years. He seems to think she and Tenzil had an affair, which appears to be false.

He also seems to be an opportunistic and partisan politican. By contrast, Taryn has genuinely worked for the public good, is not afraid to oppose her own party when she feels it is in the wrong, and works to root out corruption and uphold the highest ethical standards.

Maybe she is a super-hero after all.

“You’ve no right to hold us. We demand immediate release.”

(Cal, er, demonstrates her power for Evillo after he propositions her)
Calorie Queen: “You filthy little two-timing, worm-eating, babootch-faced snake !”
Evillo: “S-super strength. You’ve got super-strength.”
Calorie Queen: “That’s right, mister ! Touch me again with those disgusting little maggot-infested paws of yours and I’ll snap them off… you little, foul-minded, jelly-sucking mealybug !”

“I gotta run. Active life of a congresswoman, you know.”

Drawbacks:
Loss Vulnerability — if she somehow lost her Sharpness Power she would also lose the top 5 APs of her STR and the top 2 APs of her BODY.

When it comes to character history and personality, I’ve treated the 2995 LSH Sourcebook as almost equal to a primary source on par with the comics, since it was written by two of the then-current LSH writers.

When it comes to game statistics and mechanisms for handling her powers, however, I’ve felt free to make improvements. To my knowledge the Bierbaums aren’t conversant in DCH mechanics and didn’t handle that side of things.

For instance, her Mayfair profile indicates that Calorie Queen’s strength level is variable, and that she needs to “power up” by eating an incredible mass of food. This simply isn’t shown in the comics. On one occasion she uses her strength without knowing in advance that she’d need to power-up.

So I’ve ignored this and written her up as her performance in the comics indicates, which has the added benefit of keeping things simple. If you’re interested in using Mayfair’s variable strength mechanism, it’s included in a special optional section below.

As noted in the pre-Crisis writeup, I’ve used a combination of Claws and Sharpness to represent Bismollian eating powers. It’s possible that they should also have Superspeed: 10 (only to subtract time from tasks, only for the specific task of eating).

That’s if you really care about keeping track of how much and how fast a Bismollian can eat, which, you know, I don’t.

Calorie Queen? Matter-Eater Lad?!? They have the power of super-eating???!? And they’re from the planet BISMOLL!??!?!? As in Pepto-Bismol , which provides relief from upset stomachs?

Obviously, these characters are not intended to be taken very seriously. Bismollians in Legion stories are more about comic relief than they are about taking down an opponent.

But in a role-playing game, it’s probably inevitable that someone will use Calorie Queen to try taking down Superman, or send up Matter-Eater Lad as the ultimate weapon against Superboy-Prime. The stats above are designed with this potential situation in mind. It reflects the phenomenal potency of their power, which in some ways mimics that of Mano of the Fatal Five.

With the combination of Claws and Sharpness, a Bismollian can score RAPs against just about anyone or anything. Matter-Eater Lad once defeated Omega and saved the universe by eating the Miracle Machine, which took punches from Superboy and Ultra Boy and wasn’t scratched.

But a single bite won’t be fatal for most. With a Trick Shot, the Bismollian might get a finger (or a nose, as happened to Pulsar Stargrave).

If you go this route and have Bismollians aggressively use their “powers”, remember that these are light-hearted characters, not grim‘n’gritty 90s era combat monsters. (One does shudder at the thought of a Bismollian Hannibal Lecter, though.)

One other point. For a human, biting someone who is trying to avoid it is presumably much tougher than hitting or kicking them. In the stories, though, Matter-Eater Lad is constantly biting guns out of a goon’s hand (a Trick Shot requiring an AV penalty), so the AV penalty for biting can’t be too great.

Following that precedent, I’ve only given Taryn a -1 CS penalty to her AV if and when she tries to bite someone.

You are what you eat

As mentioned above, two of the three previous official writeups of Calorie Queen indicate that she has a variable strength level. If you choose to incorporate this into your version of Calorie Queen, her baseline STR should drop to 04 (03 if her powers are ever neutralized).

Her strength increases as she eats more mass. If she eats something with 0 APs of mass, her STR rises to 05. Each additional AP of mass she eats increases her STR by an additional AP, up to a maximum of 08 APs of STR when Calorie Queen has eaten a mass of 3+ APs. This increased STR lasts about an hour (10 APs of time). 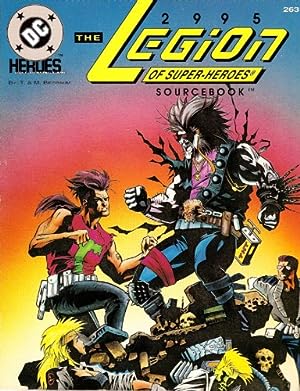 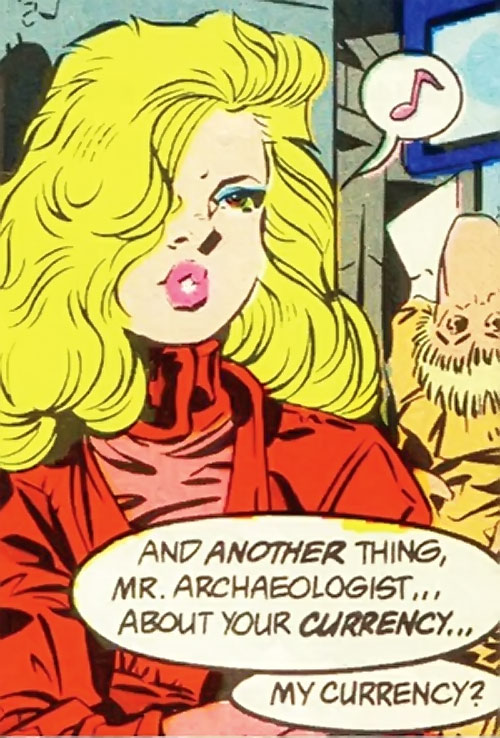 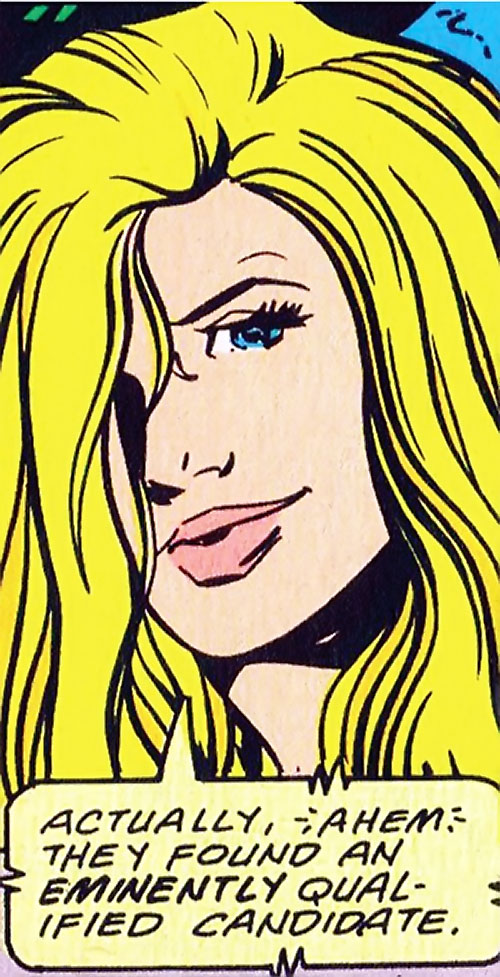 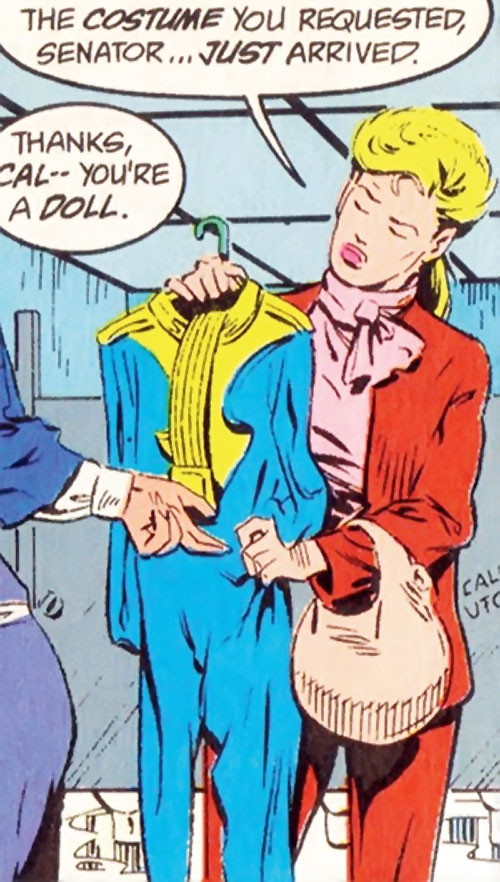 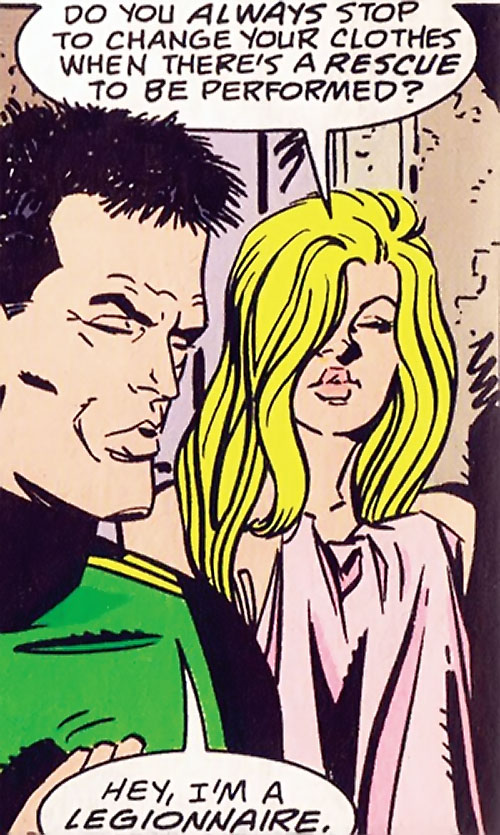 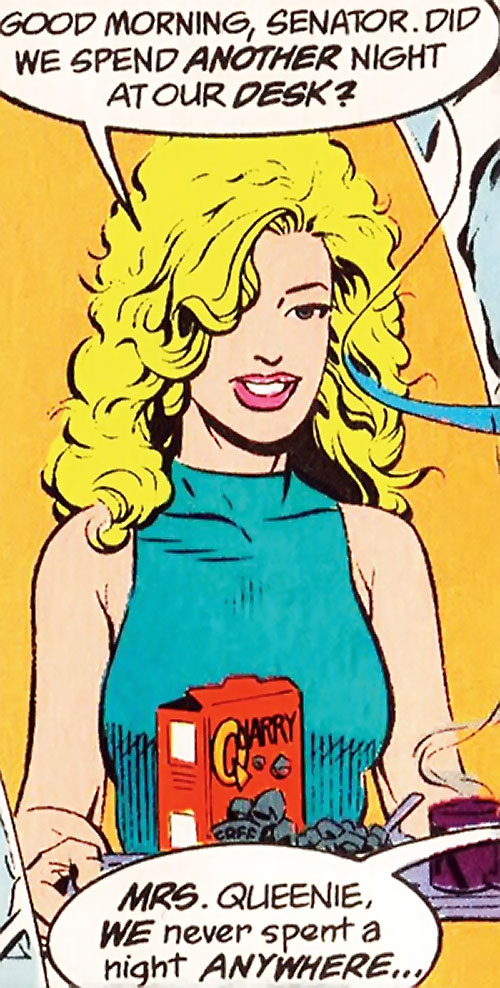 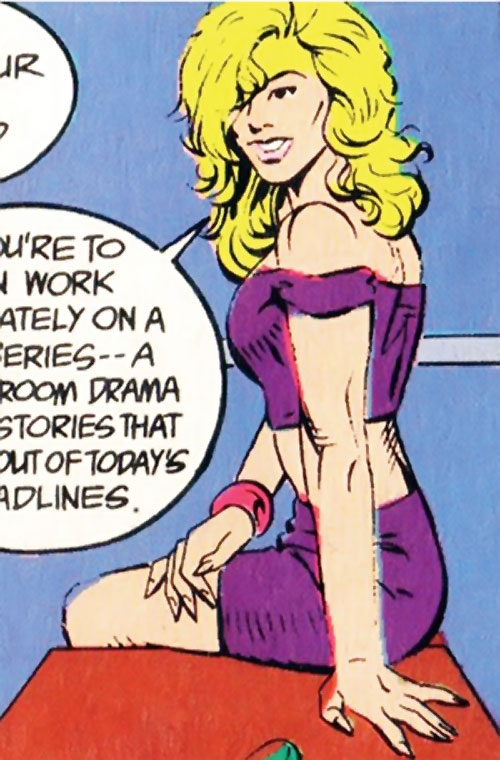 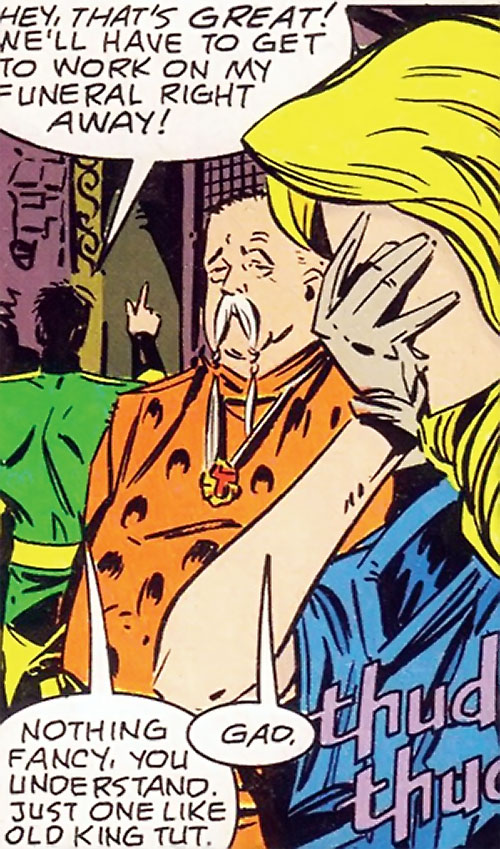 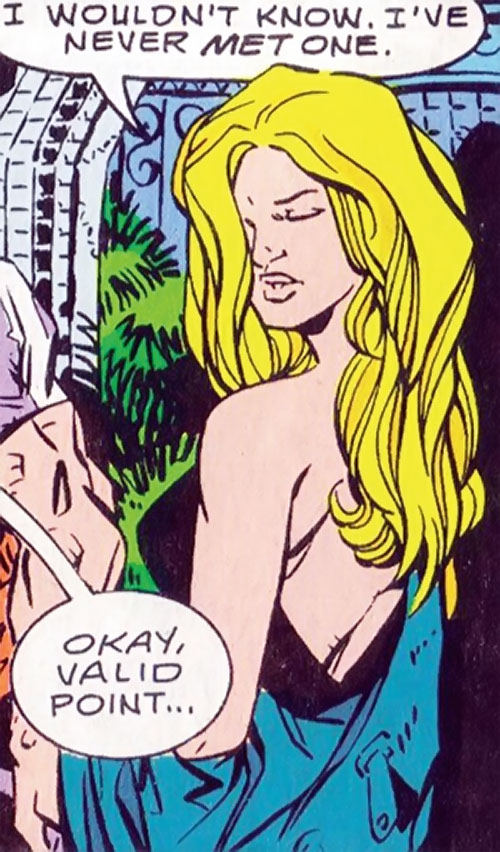