Like all Bismollians, Taryn has the ability to eat matter in all forms, however durable or toxic. Her Bismollian physiology converts matter to energy. In DC Heroes RPG terms this is Claws, Sharpness, Systemic Antidote.

In normal Bismollians, most of that energy dissipates harmlessly. The treatment devised by Taryn’s father channels that excess energy into her muscles, making her superhumanly tough and durable. It also makes her capable of superhuman leaping and running.

Calorie Queen is a devastatingly quick and powerful hand-to-hand combatant. She also can increase her strength at need with a quick “power lunch”.

She has a forceful personality and has worked to acquire a wide range of heroic skills, including first aid and stealth skills. She’s a terrible pilot, though.

Taryn Loy is the daughter of Bismoll’s most famous atomic scientist, a man who devised a process to give Bismollians superior strength. So far as is known, the only Bismollian who has been exposed to this process is his daughter Taryn.

Taryn decided to travel to Earth to try-out for membership in the Legion of Super-Heroes as Calorie Queen. She was rejected on the grounds that she had no unique super-power. This was a requirement for all applicants except Superboy and Supergirl.

Her matter-eating ability was duplicated by long-time Legionnaire Matter-Eater Lad. And her modestly enhanced strength was far below the levels of the truly super-strong Legionnaires.

Disgruntled, Taryn was nonetheless disturbed when another recent rejectee, a telepath called Esper Lass, approached her about joining a group of “Super-Rejects”. It was a chance to get even with the LSH.

Taryn didn’t think this a good idea. But by focusing her surface thoughts on her own disappointment, she was able to convince the others that she was going along with them.

The six rejects — Esper Lass, Magnetic Kid, Micro Lad, Chameleon Kid, and Phantom Lad, with Calorie Queen playing along — challenged their LSH counterparts to a duel. They hoped to prove their superior worth and take their places in the LSH.

The Rejects showed up at LSH HQ and issued their challenge. But the Legionnaires declined to participate in the childish grudge match. The others attacked anyway. Calorie Queen was forced to step in when Magno Lad viciously attacked Cosmic Boy and Matter-Eater Lad. She decked the unprepared Magno Lad.

Legion skill and teamwork quickly took care of the others, and the Rejects were once more summarily rejected. Magno Lad was charged with assault, and the others were charged with reckless endangerment, except for Calorie Queen.

Ironically, at the conclusion of the battle, Matter-Eater Lad received word that, per Bismollian law, he had been drafted to run for Congress on his homeworld. Accordingly, he resigned from the LSH and recommended to the Legionnaires that Calorie Queen be his replacement. Impressed with her skills and her courage, the LSH voted her in on a provisional basis.

Calorie Queen quickly proved to be perhaps the most skilled fighter in the LSH (apart from Karate Kid). She also was the most physically powerful of any then-active female Legionnaire, with the possible exception of Light Lass.

Taryn gained a reputation from her teammates for really coming through in a clutch, becoming implacable and seemingly unstoppable when things really became grim.

Three of the Rejects (Esper Lass, Magno Lad, and Micro Lad) later went on to join the Legion of Super-Villains. They took their resentment of the LSH to very dangerous levels and showed a particular hatred for Calorie Queen. She has also special hatred from Evillo and his new Devil’s Dozen.

Among the Legionnaires, she is particularly close to all of the female members, whom she began training with not long after her induction. She proved to be a better combat instructor than the oft-absent Karate Kid, as she had more patience with a normal person’s skills and limits.

She greatly heightened the skills of Dream Girl, Shadow Lass, Phantom Girl, Shrinking Violet, and later the White Witch. Her skills as a teacher and mentor have also made her a hit at the Legion Academy. She is close to both Bouncing Boy and Duo Damsel, and her teaching has done wonders for both Laurel Kent and Night Girl.

Recently, she’s been considering a leave of absence in order to answer an invitation from the Amazons of Themyscira to be trained in their techniques.

Calorie Queen is an athletic blonde with a red costume.

Her clothes are chosen to allow ease of movement, and she has occasionally traded in the red for a less obtrusive black.

Taryn is bold, forceful, hard-working, and dedicated. Highly independent and capable, in battle she’s best on her own or calling the shots.

She’s not a loner, but she’s so quick and decisive that it’s hard for even most Legionnaires to keep up or call orders. She genuinely works for the good of all and can be fierce in defense of the innocent or her friends.

Taryn is funny and has a genuinely quick wit. She can be snarky at times, and when truly angry becomes a mouthy sort of whirlwind — with both insults and fists flying. Her anger never makes her lose focus, though.

She lost her mom to illness when she was very young. Her dad, vacillates between disappearing into his work, surfacing occasionally for a stint as an indulgent father and giver of inappropriately huge gifts before returning to being an absent-minded, neglectful scientist. His power-enhancing strength treatment was one such huge and unsolicited gift.

Still, Taryn is fully aware of what a rare and powerful gift she’s been given. She does her best to live up to that responsibility. She has a burning desire to give back to others — protecting them, yes, and fighting evil, but even more importantly empowering and encouraging other to be capable themselves.

“There ! I’ve proved you’ve no right to represent Bismoll in the Legion ! You should be replaced by Calorie Queen !”

“You’ve no right to hold us. We demand immediate release.”

“Look, Brin, you don’t laugh at Mano, and we’ve got the same power, you know. Do I need to bite somebody to get some respect around here — Shut up, Sun Boy, that wasn’t a straight line.”

(While undercover, in answer to a threatening thug) “I’m Calorie Queen. A Legionnaire. And you are ?” (Smackdown ensues.)

Another route for the rejected Taryn might have been membership in the Subs. Or she could have her powers increased (maybe by an alchemical formula of Nemesis Kid’s), joining the Legion of Super-Villains as the Devourer?

Drawbacks:
Loss Vulnerability — if she somehow lost her Sharpness Power she would also lose all other powers, the top 4 APs of her STR, the top 3 APs of her Martial Artist and Acrobatics, and the top 2 APs of her BODY.

Another way to incorporate Calorie Queen is to have Brainiac 5 tinker with the process her dad came up with to give her super-strength in the first place. A successful outcome there could give Taryn truly significant power.

For me, that particular thought experiment ends up with Taryn having something like STR 14, BOD 07, and Martial Artist: 09, generally used for RV. That puts her in the range of a Marvel Universe-type brick, which might also be an interesting role for her.

I wanted to see how that type of character would do in LSH-level adventures, and wanted a physically powerful female Legionnaire who a) wasn’t of the Kryptonian power-set, and b) could reasonably be inserted into the Legion’s past.

Note that her baseline STR is higher than in the pre-Crisis version, slightly lower than the Five Year Gap version, but potentially higher than either thanks to her Power Reserve.

The Power Reserve equates to the way Buffy can suddenly become more efficient against major opponents. Though in Buffy’s case it’s minus the binge eating bit. (That, by the way, is from Mayfair Game’s spin on Calorie Queen, and is not an endorsement of unsafe eating habits.)

Likewise, the lack of Vehicles Skill is a Buffy homage, and not a swipe at women drivers (who in general are safer than male drivers; just ask an insurance company).

The final quote is also a Buffy homage, reminiscent of one of my favorite moments, from the first episode of season 3. In it, Our Heroine is asked “Who are you?” by a demonic slaver. The correct response from the human slaves is “no one”. Buffy sweetly answers “I’m Buffy. The Vampire Slayer. And you are?” Then she shows them what a Slayer is. 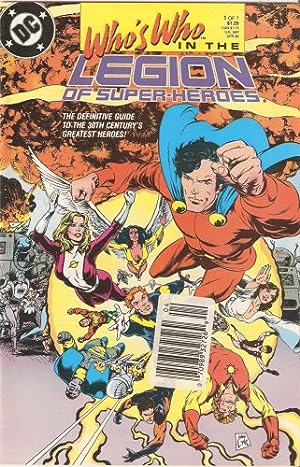