Chase was a 1998 DC Comics series written by Dan Johnson and drawn by J.H. Williams III. It was intriguing, cool, packed with ideas and died within the year for lack of buyage.

These notes cover the heroine, Agent Cameron Chase, as she appeared during that year. She is a multi-talented Federal investigator specialising in metahuman cases.

Chase is a highly experienced and talented field agent and detective. She is used to dangerous situations and can handle most of them with aplomb. Although she doesn’t look extremely fit, she is quite gifted physically – from marksmanship to wrestling down suspects to rooftop chases. She also seems to be an excellent driver.

Although Chase doesn’t advertise it or take fancy poses, her gunplay is pretty impressive when analysed – she rarely misses. She could acquire and dispatch very fast targets while storming a darkened building with possible friendlies without missing a beat.

She didn’t hesitate to shoot an opponent off Batman while the latter was rolling on the floor wrestling with it. As an law enforcement officer, she’s trained not to take shots that could go wild and hit a civilian behind some wall.

Chase is an Internet veteran, harking back to the early 1980s and the BBSes . She is an excellent hacker and computer surveillance specialist, and is very fluent at using databases, checking routing tables and the like. Oracle herself considered her skills to be on the professional data spook level.

Although she has trouble accepting it, she is also a metahuman. In some cases, she suddenly becomes able to perceive an aura around super-humans, like a small swarm of buzzing bees. She can swoosh the “bees” away with some mental effort, although they will come back.

This unique sense is accompanied with uncomfortable visual distortions and a brief loss of colour and perspective.

Chase’s ability to Neutralise or Reflect superhuman powers (sometimes called her “living equaliser” power) is untrained. Furthermore, she has trouble accepting that it exists. As a result, it is somewhat unpredictable, and is solely used in reflexive self-defence against serious dangers.

She doesn’t routinely use her Detect either, due to denial.

Characters who can sense metahumans will get an odd reading when attempting to assess Chase. Nothing really conclusive, but she “feels” really weird to relevant superhuman senses (in DC Heroes RPG terms, that’s Obscure).

Cameron Chase was born during the early 1960s. This corresponds the end of the gap between the Golden Age  of heroes and the beginnings of the Silver Age . Metahuman activity during that time was both sparse and not very serious. It was much closer to dilettantes playing cops and robbers.

One of those lesser, self-proclaimed heroes was the Acro-bat, the leader of a group called the Justice Experience. He was Cameron’s father.

During a fight between the Justice Experience and a “super-villain” group called the House of Pain, a rare casualty happened. A civilian named Caroline Anders fell on the third raid in a subway station and was electrocuted.

Anders was the girlfriend of a disfigured, reclusive genius named Larry Trapp. Having lost the only person who ever loved him, Trapp became unhinged. He stalked those whom he held responsible – the watered-down heroes and villains of his generation. 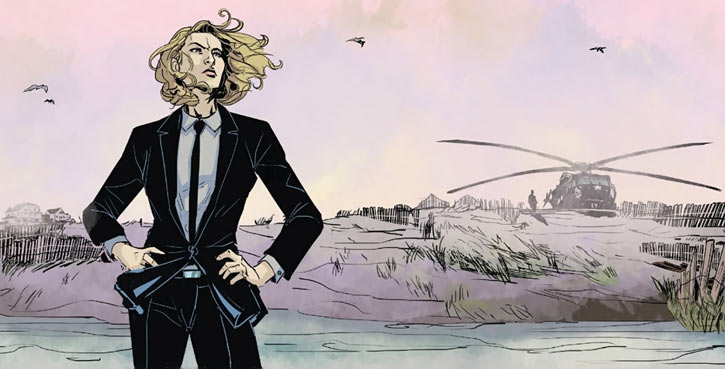 Trapp, on the other hand, was the real thing, and killed most of them. His first victim was the leader of the Justice Experience, Chase’s father. He killed the Bat in his own home by ripping out his throat with artificial jaws. Cameron, then aged 7, discovered the body.

Shortly after, the Chase family left Gotham for California. After a two-years rampage, Trapp (nicknamed “Doctor Trap” by the press) became enough of a serial killer to rouse the JSA from their retirement. They arrested him.

What happened during Chase’s formative years is unknown. It is quite possible she spent some years in a police department and/or the armed forces. She described herself during her college years as an early computer geek, and was a well-known poster in the earliest years of Usenet (1980-81 or so).

By her mid- to late-20s, she was a private investigator in Los Angeles. Few of her cases are documented, except for two encounters with the Cult of the Broken Circle, a murderous occult organization.

She was once “hired” by Klarion’s the Witch Boy’s astral form to free his physical body which had been trapped by the Cult. Chase later briefly teamed-up with Green Lantern (Hal Jordan) to rescue his cousin Air-Wave, who had become an amnesiac.

She occasionally teamed up with Knob, a burly down-on-his luck man who is half-P.I., half-homeless person. Knob nevertheless insists that he is a legitimate investigator.

Some years later, Chase’s track record became impressive enough that she was hired by a top-level Federal agency, the D.E.O. (Department of Extranormal Operations). By the time of her recruitment, the D.E.O. already held the position of the central agency handling nearly all cases having to do wither superhumans and costumed adventurers.

Chase’s career as a D.E.O. Special Agent started before she could even set foot in her office. She was driving cross-country from L.A. to her new job in New York, and took a detour to visit her sister in Gotham.

Being the Special Agent closest to Gotham, she was detailed to investigate the disappearance of a creature called Clay-Thing, descended from two Clayfaces.

During that case, she came to collaborate with the Batman. This changed her general view of costumed adventurers, toning down her hostility a bit. The Clay-Thing was neutralized by Chase, who reflexively made it turn its ranged disintegration attack upon itself.

Chase has since quite successfully handled a large number of cases for the D.E.O. :

During one of her cases, Chase came dangerously close to zeroing in on the Batman’s secret identity. Batman prepared a sting operation which would have led Chase to erroneously conclude that the Batman was Alan Scott. But, for reasons of her own, Chase elected not to unmask “Batman”, and left him with his secret.

Chase is an attractive woman, with large and very green eyes. But she usually looks tired and cranky, wears little to no makeup and dresses frumpily and out from her suitcase.

She almost always wears her old long coat, a light-coloured shirt, dark-coloured pants and women’s boots. She is usually smoking.

Cameron Chase is tough, professional, experienced and very intelligent. She has seen a lot of weird, violent, and distressing stuff. She deals with it with a mix of solid horse sense, definite can-do attitude and guts. She is a take charge person, and is almost always very thorough.

She has demonstrated an ability to handle anything from conducting superhuman commando missions deep in hostile territory within Peru to child psychology and crime scene analysis. From storming a drugs lab to unearthing demon cults fighting with Klarion the Witch-Boy.

She seems to genuinely enjoy being detailed on tough and dangerous missions.

Chase often displays a dry, sarcastic wit. However her goal is not to show off how clever she is, since her self-assurance doesn’t work that way. She’s genuinely cynical and it occasionally shows through biting, cranky and/or humorous remarks.

She can occasionally be somewhat angry at her own reactions – such as judging herself weak for feeling guilty when it’s no rationally justified.

Chase is a smoker. Howbeit, it seems that she mostly lights up to help with stress and to get people out of her personal space, since she often would rather be left alone. It may also be a way to express a certain rejection of conventional, healthy and pretty femininity.

Chase is highly sceptical and, as an investigator, questions everything and has doubts about the rest. Her questions extend to her own function and agency. Thus, she understands the D.E.O. is quite dangerous too. But in her eyes, it is far less perilous than the vast majority of metahumans.

There has been hints that this questioning attitude was highly considered by Director Bones, and that Chase was very likely to succeed him in a decade or so.

Cameron’s sister, Terry, is her junior by five years. However, she sounds and looks more like ten years younger due to their different lifestyles. She’s a bit of a superficial, good-hearted, naive airhead, but both sisters get along well. Except that Terry is a huge super-heroes fan, which makes Cameron cranky.

Chase has a conflicted view of metas. Most of the time she expresses cold but obvious contempt and loathing toward them, viewing the D.E.O. as a necessary controller and superhuman as occasionally dangerous nuisance with the maturity of your average 1970s rock star.

This resentment become considerably less pronounced after her encounter with Batman. During that one she realized some heroes were actually professionals and she’d do exactly the same thing were she in their shoes. She left with the feeling that her and Batman weren’t dissimilar. This struck her enough that she later opted not to rob him of his secret identity out of respect.

That she is herself a metahuman is quite a conflict for her. She very much dislikes thinking about it or using her powers. She almost never admits that she has powers, handwaving her uses of Neutralize as strokes of luck.

While addressing Batman, she stated that she did metahuman affairs control not out of hatred toward metahumans, but to prevent others from experiencing what she had endured as a child. Which, ironically, is identical to Batman’s own motivation.

“I’ve seen it before. Only one thing burns this hot and this fast. Pyrokinetic flash.”

(As things go south) “Oh no damnit – FEDERAL AGENT ! GET THE CIVVIES CLEAR !!” (whips out her badge and gun)

“Okay, everyone, stop all this posing and flexing or I’m gonna make you take a time out.”

Don’t you wish your boyfriend was root like him

Chase’s boyfriend of five years, Peter Rice, is a highly-regarded computer security specialist. He has Scientist (Computers): 08, helps Chase stay current in that field despite her full-time job for the agency, and may Team Attack with her by giving her advice, sharing the workload, etc..

They seem to go along plenty fine, although the rare spat can get nasty. They both can be pretty stubborn and overconfident in the validity of their point of view.

By Steven Howard and Sébastien Andrivet. 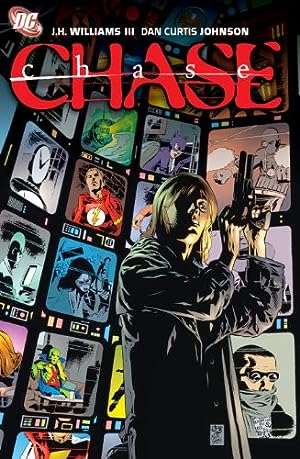 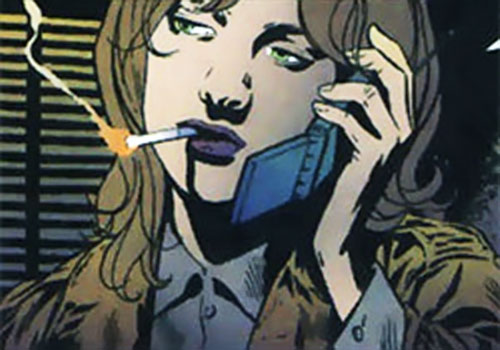 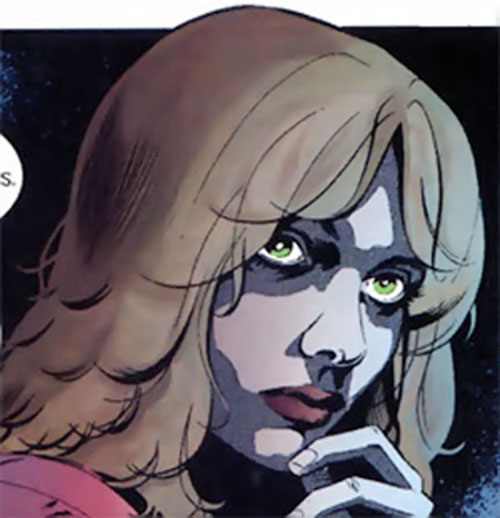 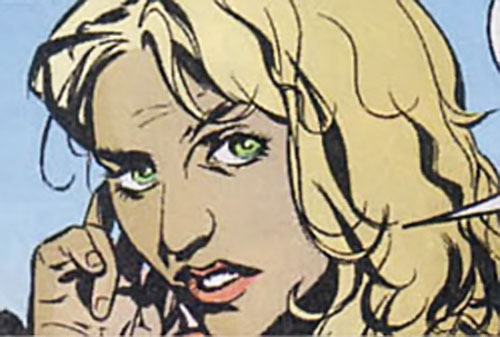 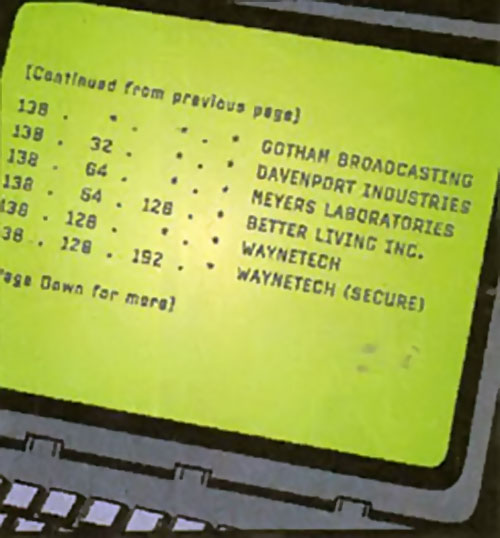