Camorouge is a professional assassin and a superior martial artist. Her experimental invisibility suit nearly always allows her to attack by surprise, and she hits like a mule. Everybody being flatfooted, she can use her Martial Artist to sub for EV to her heart’s content in DC Heroes – or perform Power Attacks in DC Adventures.

The suit also makes it quite easy to spy on and shadow people. She’s very experienced with this sort of work, obtaining information nobody else could acquire that easily.

If engaging a group of armed opponents she wants to kill, Camorouge will use their firearms against them. But generally she prefers punching and kicking people. If she’s to kill a lone target she’ll likely go in with the knife.

Camorouge is a freelance assassin, spook and reconnoiteur. She seems Francophone and European. Wile her country of origin has not been confirmed, Deathstroke assumed that she was French.

In unrevealed circumstances, she stole an experimental Soviet stealth suit. Though she was reportedly already a skilled mercenary, this suit is presumably what let her design her Camorouge identity and play in a bigger league.

One of Camorouge’s regular employers was a data syndicate in Brussels. After a job in Italy, they sent her to the US. The syndicate knew that factions within the NSA were trying to kill Green Arrow (Oliver Queen). Thus, they wanted Camorouge to offer asylum and protection to Queen in exchange for whatever info he might have.

The reasoning was that the intelligence was almost certainly worth it if the NSA wanted to terminate the archer.

Camorouge tracked down two allies of Queen, Connor Hawke and Eddie Fyers. Another assassin called the Borzoi had also just located the two men, but Camorouge intervened in time to save them. Hawke and Fyers told her that Queen had already been captured, and the Frenchwoman allied with them.

After Camorouge obtained intelligence about Queen’s possible location, Fyers shot her in the leg. He then left with Hawke.

Furious, Camorouge decided to close the contract no matter what. That was even though it had now been called off. She tracked down NSA operatives assigned to the Queen case. Then she worked her way up to a senior officer, but was ambushed by the latest version of the Force of July and captured. Their broad-spectrum vision equipment had allowed them to see her.

A NSA officer named Mr. Calendar decided to just hire Camorouge directly. Since she had been unknowingly working for them anyway.

Thus, Camorouge was sent to investigate the Soviet “science city”  Katchik-99. It had been entirely destroyed in unknown circumstances. The NSA wanted to rapidly establish who had destroyed Katchik-99, what the weapon was, and who held it.

Camorouge was presumably the first Western agent to ever reach the city, located in what is now Kazakhstan. Her guide turned out to be one of the spies protecting Katchik-99 — perhaps a KGB sleeper agent — but she killed him before he could kill her.

In Katchik-99, Camorouge discovered that the city had been hit by a biological agent called Mutajek 9-9, with abominable results. For ethical reasons, she refused to let the NSA gain access to Mutajek 9-9. Thus, she returned to the US to confront Mr. Calendar. She arrived in his office seconds after Hawke and Fyers did, intending to have a very similar confrontation.

Given what was a stake, Camorouge chose to ally with Fyers and Hawke. They chased the plane Queen was on – but Green Arrow sacrificed himself to save Metropolis from the WMD within. In the aftermath of this heroic act, Camorouge discreetly slipped away.

In 2002, when the CIA learned when Dinosaur Island would appear next, they hired Eddie Fyers to explore it. Connor Hawke came with Fyers, and the Agency threw Camorouge in. Like Fyers she was both deniable and highly skilled. 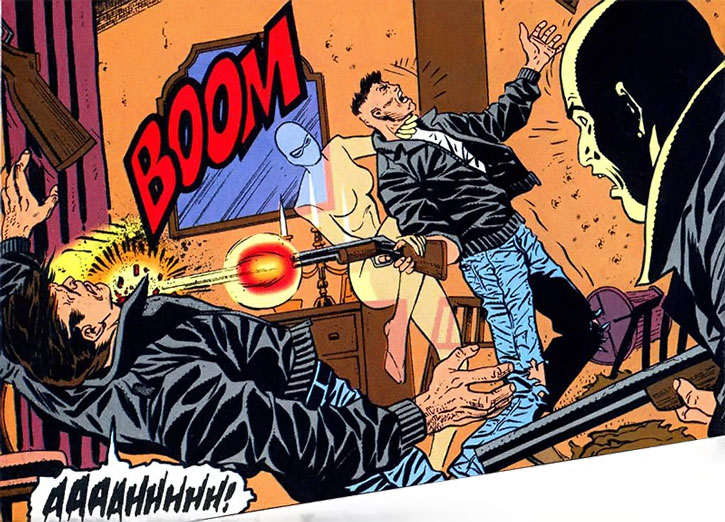 Historical intelligence showed that Imperial Japanese scientists had discovered a unique, powerful antibiotic during the early 1940s. It was thought that scientists with access to it still lived on the Island. There time doesn’t pass normally.

Camorouge knocked Hawke out once they reached the Japanese camp, so she could operate without him getting in the way. However, Fyers had been captured and was already inside. They were forced to collaborate in interrogating researchers and locating the antibiotics.

Mistakenly expecting a double-cross, Fyers drank the antibiotic so nobody could take it from him. As getting Fyers out alive was now a priority to complete the mission, Camorouge reflexively took two bullets to protect him.

Fyers carried the unconscious Camorouge out with Hawke’s help. With the help of two other adventurers exploring Dinosaur Island (Deathstroke and Black Canary) they reached a ship and evacuated. Fyers performed some basic battlefield surgery on Camorouge, getting the bullets out and confirming that she’d be okay.

She was next seen as security for one Mr. Jardine, along with Militia, Gunhawk and Bunny. But she was quickly taken out by Batgirl (Cassandra Cain).

Camorouge is a striking, athletic young woman. Her hair dye changes from time to time but is always reddish — eggplant, cherry, dark red, etc.. This is for colour-coordination with her codename. Apparently, the colour of her suit is programmable. Usually it’s red but sometimes it’s off-white, and sometimes a grey-greenish cammo pattern.

Camorouge is hugely concerned about her rep. She makes every effort to ensure that she has solid reputation for deadliness and professionalism. In her line of work this is a source of safety and money. 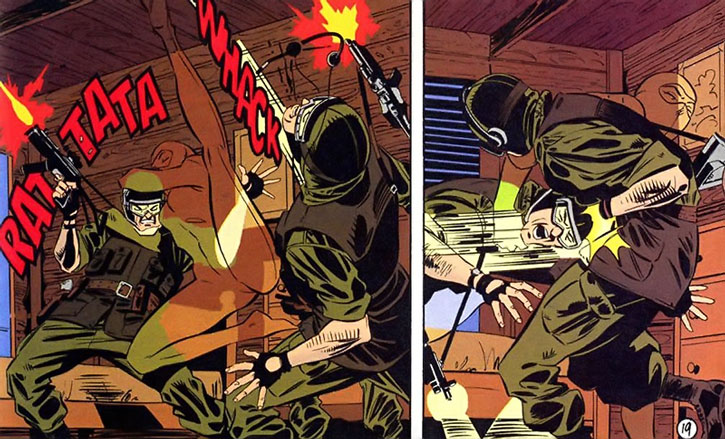 She follows her contracts to the letter. Camorouge is willing to suffer grievous harm to complete her contracts. In her opinion, that’s acting like a professional.

Camorouge does not normally kill people outside of a contract, barring self-defense. If somebody attracts her ire (for instance by trying to have her killed) she’ll demand to be assigned any contract to terminate them. Not offering her such a contract is considered a grave insult.

Camorouge is a surprisingly sensitive and sophisticated person. She also sounds well-read on the few occasions when she’s not keeping her communication professional.

She generally prefers to ghost in and out and is a friend of subtlety, though she certainly does not shy away from fights.

As she relies on stealth and a deft touch, Camorouge works best alone. She’d rather do without allies if those employ direct, loud methods that may mess everything up.

Though her English is excellent, Camorouge can miss some colloquial references.

“A pity the contract does not include his death. I might include it gratis… but that would not be… professional.”

“Fat Man ? Camorouge. This is not a protected line. So speak to me quickly.”

“I used to take the money and to hell with my conscience. Then I saw a city consumed by this Mutajek 9-9. God help you if this monster is set loose in your country.”

“Your methods are that of a Neanderthal.”

One minor weakness of Camorouge is that she retains a faint aftersmell of the perfume she uses in her civilian identity. This is not normally a problem, but persons with extraordinarily acute perceptions (such as Batgirl (Cassandra Cain)) or an outright superhuman sense of smell (such as Wolverine) may be able to locate her through the miniscule perfume residues in her skin and hair.

In DC Heroes terms this is an OV/RV 07/07 with INT/WIL – 1 RAP just notices the smell, ½ RAP reveals that it’s the perfume of somebody in the room, and full RAPs locate Camorouge by smell alone. Presumably, the OV/RV for Analytical smell/Tracking scent is about 04/04.

Camorouge usually wears a strawberry scent, though other red fruits-based fragrances are a possibility.

– Knife ● 2 points
– Knockout serum — Affliction 8 (resisted by Fortitude, Fatigued/Exhausted/Asleep, Limited 2 (can only be used on a defenceless target and is delivered using a syringe) ● 2 points

Camorouge ends up surprisingly cheap given how competent and dangerous she is. She gets a lot of bang out of four points – the two Ranks of Concealment in her suit. 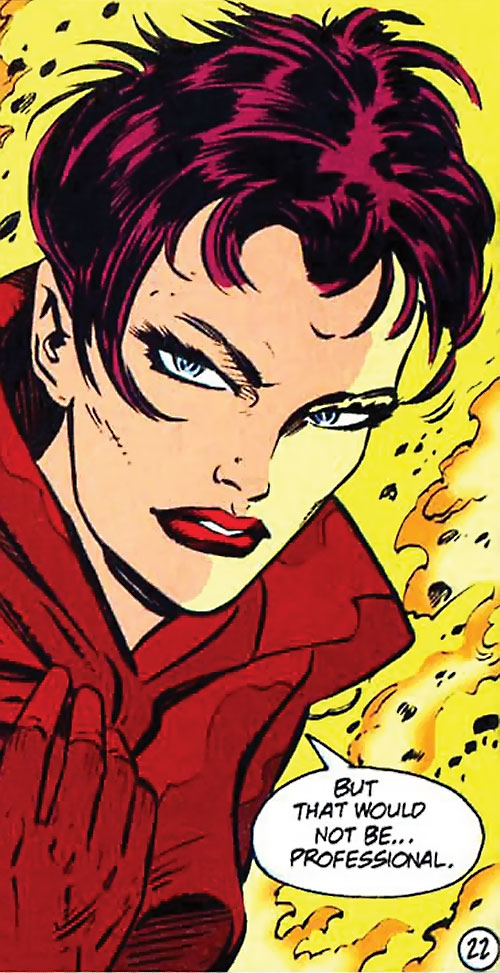 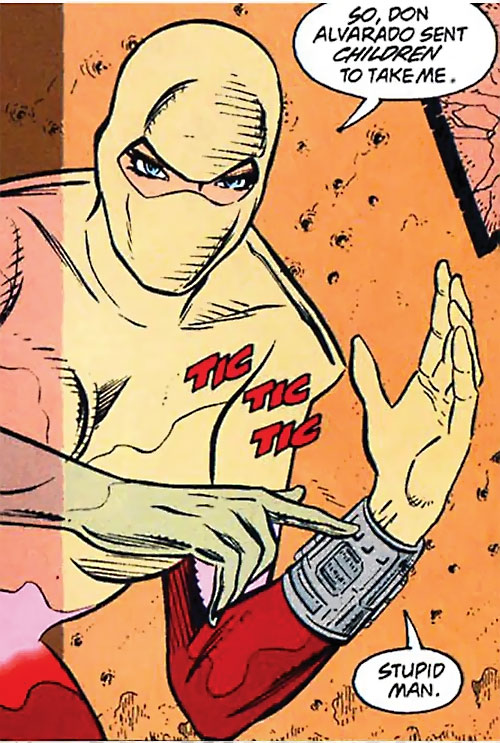 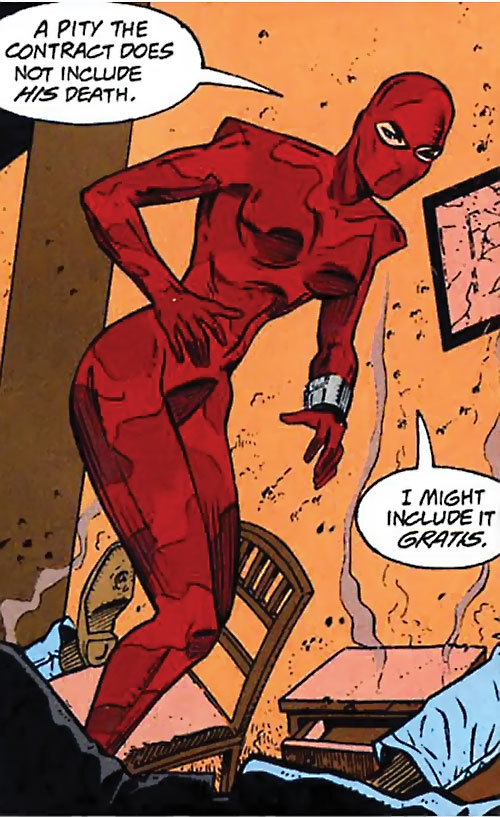