Cannon is a formidable martial artist and knife fighter. He’s capable of slaughtering a half-dozen of armed men with but a pair of weaponised sai.

He can also throw seemingly innocuous objects with deadly force, like Bullseye or Ultimate Hawkeye. Cannon once seriously wounded a man using a plastic knife (the airline/hospital/prison kind).

Cannon and Saber were mob killers, each employed by a different New York crime family. Each man felt that his skills was a major factor in the power and success of his boss. Few dared to oppose the men who controlled two of the most skilled assassins in the business.

Saber, the most ambitious of the two, concocted an elaborate plan where they killed each other’s boss. This would leave both mobs open for a take-over. This plot brought them to the attention of the Vigilante, who foiled their plan. The killers still iced their respective targets, though.

So we meet again

In the fight that followed, Vigilante, Cannon and Saber were all badly wounded (the Vigilante very nearly fatally so). The Vigilante escaped thanks to an accomplice, but the two assassins were captured by the police. They were placed in an hospital ward under the strictest security.

Cannon and Saber fled to Southern California. Once there they decided to go in the freelance assassination business together. They operated out of a house overlooking the Pacific Ocean.

When last seen, the murderous duo had accepted a contract on the Vigilante, returning to New York to fulfill it. They failed, and the Vigilante left them for capture by the police. They were sent to maximum security cells in Attica.

Cannon is very confident, even cocky. Due to his extraordinary skill, he’s seldom fighting people who can match him.

He is a professional, competent killer.

His main weakness is his love for Saber. For instance he’s liable to panic and rush his boyfriend to the hospital if he’s badly wounded, instead of acting like the professional he otherwise is.

“Too late, boys. Once I get started, I can’t be stopped. Shame too – some of you look like you’d be fun.”

Bonuses and Limitations:
Projectile weapon requires an object of opportunity (-1).

Helper(s): History from DC’s Who’s Who. 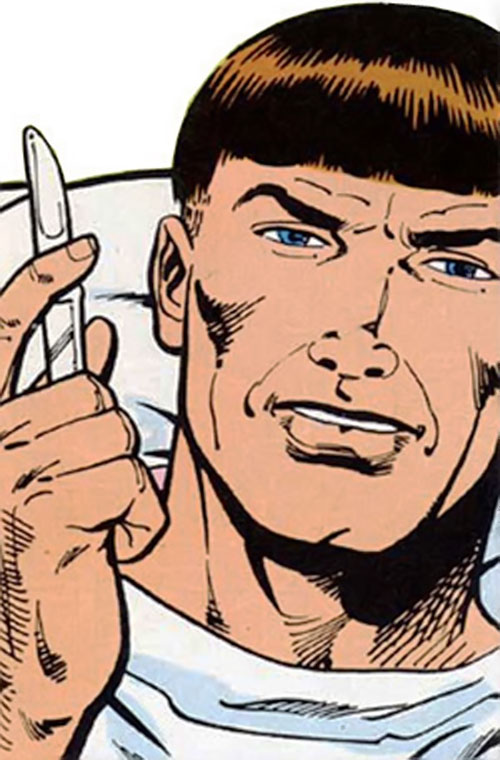