These stats are also intended to serve as a proxy writeup for an Isaiah who remained or was restored to a healthy, heroically active status in the main Marvel timeline of Earth-616. See the MU History section for suggested alternate histories along those lines.

Illustrations for possible costumes using said alternate costumes for Bradley and Rogers are included below, with details also given in the alternate history sections.

The Super-Soldier Serum has enhanced Bradley’s physical abilities to the peak of human potential. He has extensive training and experience in a variety of combat-oriented skills, a considerable power of presence, and is well respected for his former careers as Captain America and as President of the United States.

This version of Isaiah Bradley had the benefit of much better circumstances than his main timeline counterpart. On this alternate Earth Bradley was not only the recipient of a properly formulated Super-Soldier Serum (simply known as the Super Serum on his world). He was also considered worthy to take on the mantle of Captain America.

This would seem to indicate that he did not suffer the same level of racism that his Earth-616 counterpart did. However it is worth noting that one of his foes was the Krimson Klansman.

Bradley never married — “I tomcatted for years and gave up on settling down.” His partner Bucky spent a considerable amount of time covering up Bradley’s various indiscretions. He even adopted Isaiah’s daughter Becky after it became clear Bradley was unwilling to be a proper father for her. This version of Bucky did not die in the war.

It is unclear if Isaiah was ever “put on ice” as Rogers was. But it is unlikely that this was the case given that he had his picture taken with Eisenhower while that man was president.

In 2004, Bradley decided to run for President of the United States. While Isaiah was in Cleveland campaigning, Bucky took Becky to see the Sky-Destroyer Steranko  on display at the Intrepid Air Museum in New York. When the Krimson Klansman attempted to hijack the Steranko, Bucky stopped him by taking him over the side. Both men fell to their deaths.

Becky blamed Isaiah for Bucky’s death, feeling he should have been there to help. Bradley became even more distant from her after winning the election. Isaiah served as president from 2005 to 2013.

By 2026, the 250th anniversary of the formation of the United States of America, Isaiah was retired. Meanwhile, his daughter Becky had gone completely insane. She traveled back in time from that year to ruin Bradley’s presidential run, only to end up in the alternate 2004 of Earth-616.

Bradley followed her and teamed-up with Steven Rogers to stop his daughter’s plan and bring her back to his present.

Isaiah has a broad, brawny build as a result of the super soldier serum. His round face can be very expressive. However, his default serious look often masks this when first meeting him.

Despite being approximately a century old, he still appears to be in his mid-thirties.

While serving as Captain America, he wore the same uniform and used the same shield as Steven Rogers did in the 616 timeline. Now retired from that position, Bradley wears comfortable casual clothing such as a black t-shirt bearing the “Double V for Victory” banner, beige slacks, and brown shoes.

Unlike the Earth-616 Bradley, this Isaiah did not have the grounding influence of his marriage. While he served ably as Captain America, his personal life was another story. He never had a serious romantic relationship, preferring to play the field.

He fathered a daughter during one of these trysts but remained distant from her. He now feels guilty for:

(Taking the infinihedron away from his daughter) “Don’t mess with the wonder of the universe !”

(While fighting doll-sized android supervillains)
Isaiah: “They’re designer homunculi ! We had a problem with over-aggressive mutant toddlers a few years back, and these things were NOT a good approach !”
Rogers: “Someone sold these to kids ?!”
Isaiah: “Steve, you can eliminate disease, illiteracy, and poverty, but the free market is tough to handle !”

Below are just two possible ways to make Isaiah Bradley a more active part of a campaign, depending on:

A Slow Re-emergence Into the Spotlight, part 1

The first AltMU history diverges in the ’50s. When the 1950s Captain America and Bucky, using the original version of the serum, began to exhibit signs of insanity, they were placed in suspended animation until a cure could be found.

Isaiah was similarly placed in hibernation while in federal custody for fear that he would suffer the same psychological issues. Instead, the lowering of his metabolism by the suspension process allowed Bradley’s body to better adjust to the modified version of the serum.

Though Bradley lost some of his superhuman strength and durability, he recovered from the negative physical and mental side-effects of the serum.

When he was freed in 1961, Bradley was content to retire quietly at first. He made up for lost time with his wife and family. When Steven Rogers was found 3 years later, he was soon informed of rumors regarding Bradley via various parties. These included friends of his who had also heard the legends, and reporters interested in the various super soldier projects.

Rogers investigated, met Bradley, and became a vocal advocate for giving Bradley a full pardon with no secrecy conditions. Working with prominent figures in the civil rights movement, Rogers succeeded in getting Bradley full public acknowledgement from the government by 1966.

No longer being legally forced to remain obscure, Bradley himself became a public figure in the civil rights during the late-‘60s but did not resume superheroics at that time.

A Slow Re-emergence Into the Spotlight, part 2

In 1972, the 1950s Cap and Bucky were freed from their suspended animation. They began to wreak havoc in Harlem to lure the Falcon in. They captured and interrogated him about the other Captain America (who they did not realize was the original).

When the people of the neighborhood gathered and attacked the ersatz Cap and Bucky to free the Falcon, Isaiah led the charge. With his assistance the group was even more successful than in the original history. They subdued the duo and turning them over to the authorities rather than forcing them to flee.

Isaiah was inspired by the role he had played in stopping the fake Captain America, and desired to set a better example than that man. He decided to take up the mantle of Captain America again. Rogers was enthusiastic about sharing the identity with someone he so greatly respected.

Bradley received the benefit of training from Rogers, the Falcon, and Sharon Carter, all of whom were working closely with Steve at the time.

A Slow Re-emergence Into the Spotlight, part 3

The Black Panther provided Isaiah with a disc-shaped vibranium shield (this shield is the same type as the one T’Challa gave Steve while he was the Captain). Bradley wore a variant of the Captain America uniform, respecting the heritage of the identity while establishing himself as his own man.

(The suggested costume for this alternate version of Bradley is a variant of the Captain uniform worn by Rogers and later adopted by John Walker as the USAgent. The star on the chest has been changed from black to white and the uniform is now dark blue where it was originally black (changing the black sections to a lighter blue would have required adding contours for muscle definition, which is beyond my meager artistic abilities)). 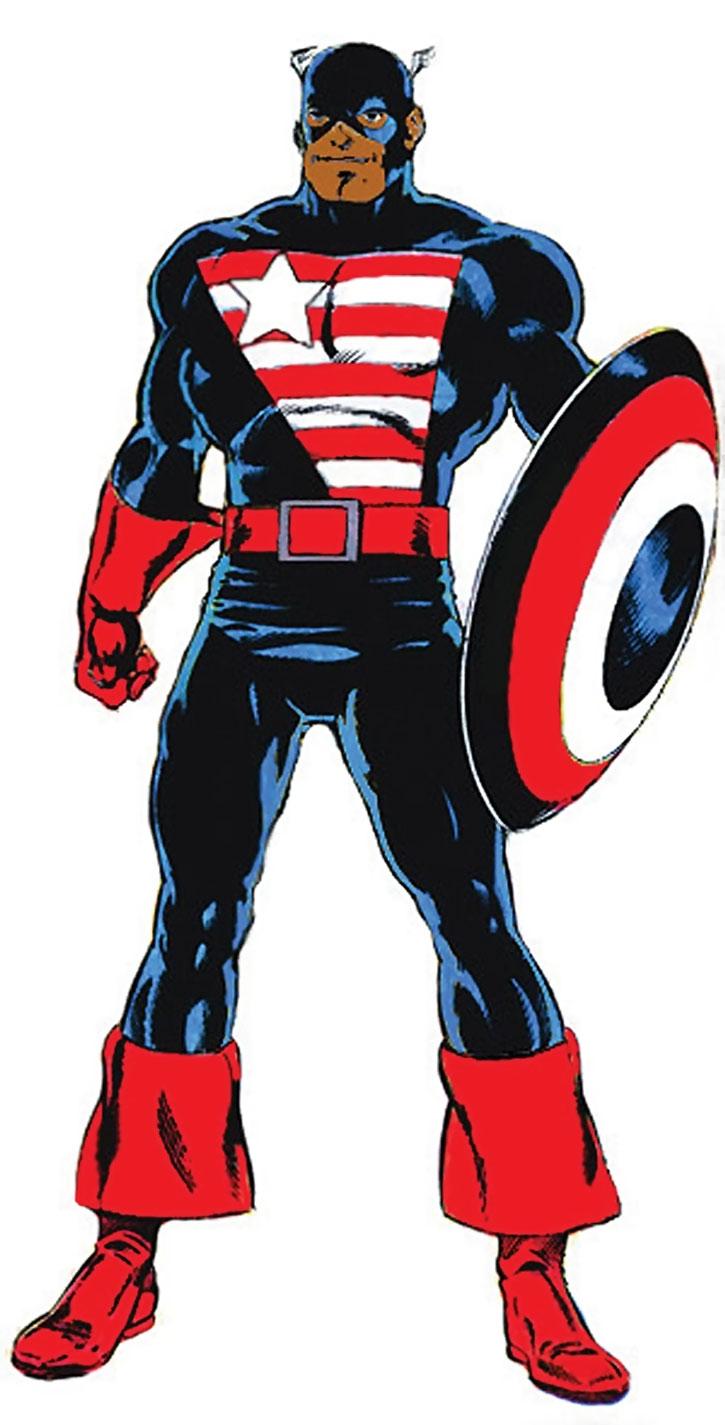 The two Captains led separate careers for the most part. Still, they stayed in regular contact and often vacationed together or teamed-up when circumstances allowed. When Rogers temporarily surrendered the Cap identity rather than directly serve the government’s Commission on Superhuman Activities, Bradley disagreed with Rogers’s decision not to oppose the committee but respected his choice.

Isaiah also outright refused to either work for the committee or give up his uniform. The group relented rather than add to the potential PR problems they were already facing with replacing Rogers. Bradley was also the one to encourage Lemar Hoskins to abandon the problematic Bucky identity in favor of his own unique persona.

A second possible AltMU history proceeds as normal up to the point that Steven Rogers is drawn into the Heroes Reborn parallel Earth. Anxious to replace Captain America, SHIELD proposed to the US government a means to restore Isaiah to full health.

Though risky, SHIELD scientists believed that they could adapt the cure for the Super-Soldier Serum’s breakdown that had been developed by the Red Skull when Rogers had become ill. Though the process was uncertain and carried the risk for making Bradley’s condition worse, he and his family agreed to try it.

The cure reversed Bradley’s illness and left him with physical enhancements much closer to Rogers’s.

Isaiah was trained by SHIELD and Taskmaster, the latter working for time off of his federal prison sentence just as he had when training John Walker. He was given an energy shield similar to the one Cap had used a short time before his disappearance (and would use again for a while after his return).

His preparation complete, Bradley was introduced to the world as the new Captain America. When Rogers returned, he expressed his profound appreciation for Isaiah’s renewed health and for having someone he so respected carry the torch. In a show of gratitude, he asked Isaiah to continue wearing the original costume while Steve himself adopted a variant uniform. 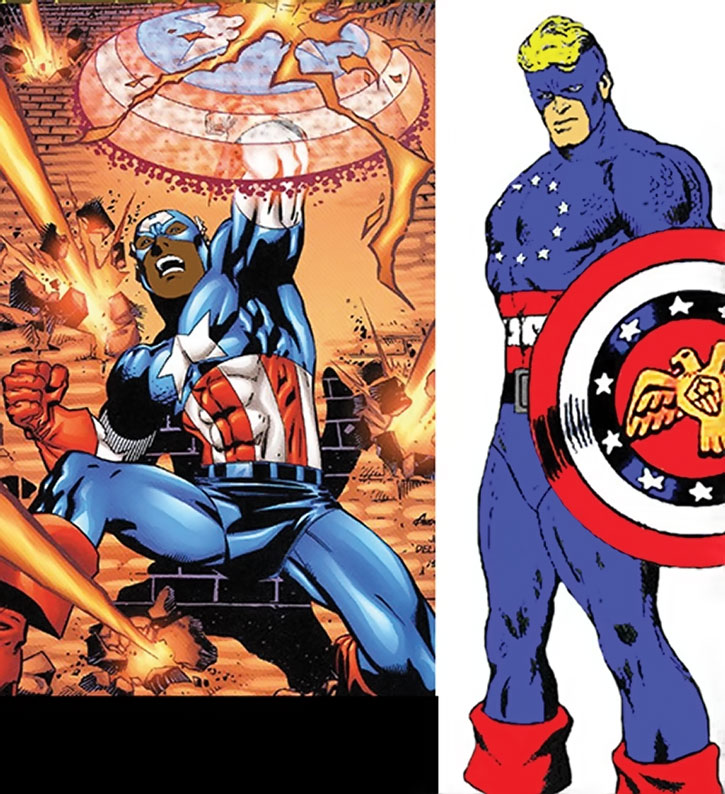 (Rogers’s variant uniform is that of DC’s Pre-Crisis Earth-X Americommando, who was created as a parody of Marvel’s Captain America. The red and blue colors have been swapped, bringing it closer to the original Captain America costume. The shield is from Rogers’s speculative visualization of the shield used by his ancestor Captain Steven Rogers during the Revolutionary War.)

(The combination of this shield with the original American flag’s circle of 13 stars on the Americommando uniform seemed fitting. The open-topped cowl also makes a fitting call-back to the one chosen by Rogers when he designed his Nomad costume.)

All Roads Lead to Home

Both versions of the above alternate Marvel Universe histories eventually lead to the same place. When the Young Avengers debuted Bradley took responsibility for them, training them and acting as a mentor to the group.

When the Civil War broke out Isaiah did not go underground as Rogers did. He instead fought the registration act in the public arena by speaking out against it in every venue he could, serving as a reminder of previous abuses and exploitations that the government had perpetrated against metahumans.

He also engaged in various forms of civil disobedience such as wandering his neighborhood in plain clothes and making ordinary citizen arrests of criminals whenever the opportunity presented itself.

Bonuses and Limitations:
Suspension is Automatically Activated when Captain America’s Current BODY drops to 0 or below due to damage from cold and can only be used in this manner (-2FC).

Given the very limited screen time for this version of Bradley, I used Steven Rogers’s modern-day stats as a base and made the following assumptions based on Bradley’s history. 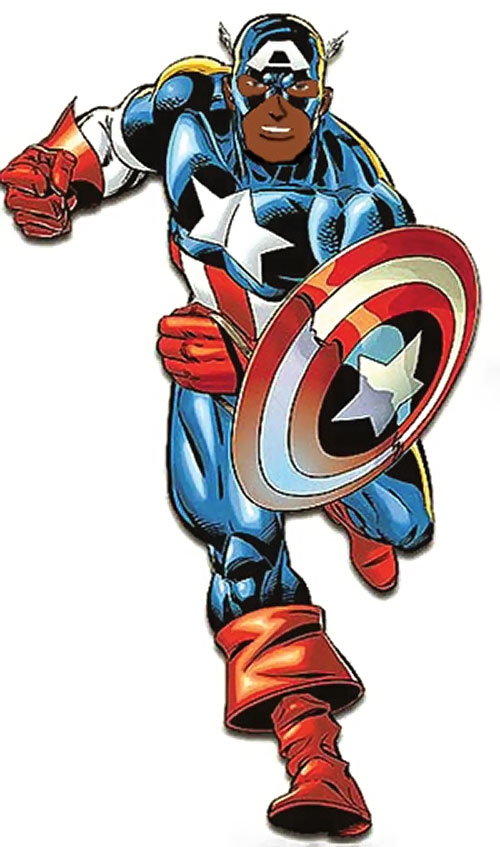 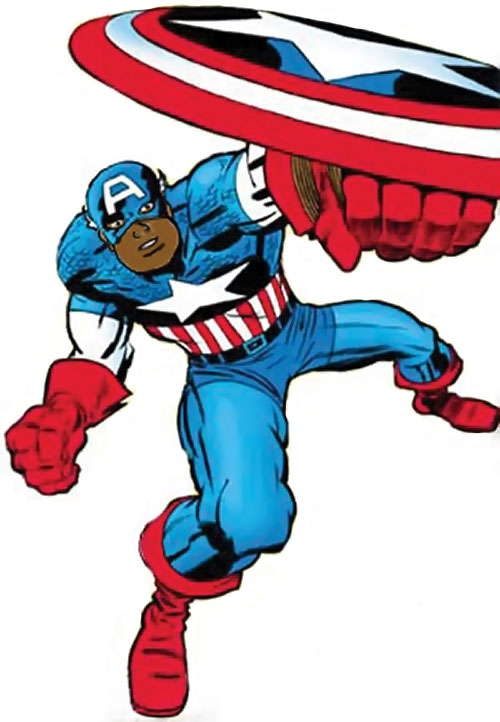