Captain Axis is an obscure Marvel Comics villain. He appeared but once, and briefly. Whether he even exists in-universe is debatable.

However, the story that featured him is good inspiration for gamemasters. And he’s got a generic quality that makes it easy to use him just about anywhere.

Also he fought the Hulk. So he’s kinda strong.

If you were looking for a different super-strong-World-War-Two-thug-with-a-swastika-on-his-chest, see our guide to Captain Nazi.

Captain Axis would have been the ideal result of a program of “genetic surgery”.

Said program was dreamed up by Nazi scientist Otto Kronsteig. Through a long series of operations, Captain Axis would have been turned into a superhumanly strong and powerful combat machine.

How powerful Captain Axis would have been is unclear. He wasn’t a genuine threat for the Hulk. But it is said that he would have been able to counter wartime Allied superhumans such as Captain America (Steve Rogers) or even the Submariner (Namor).

Kronsteig was a gifted engineer and scientist. He had enough talent to attract the attention of Doctor Doom (Victor von Doom).

But he seems to better work as part of a well-funded team than as a lone comic book genius. 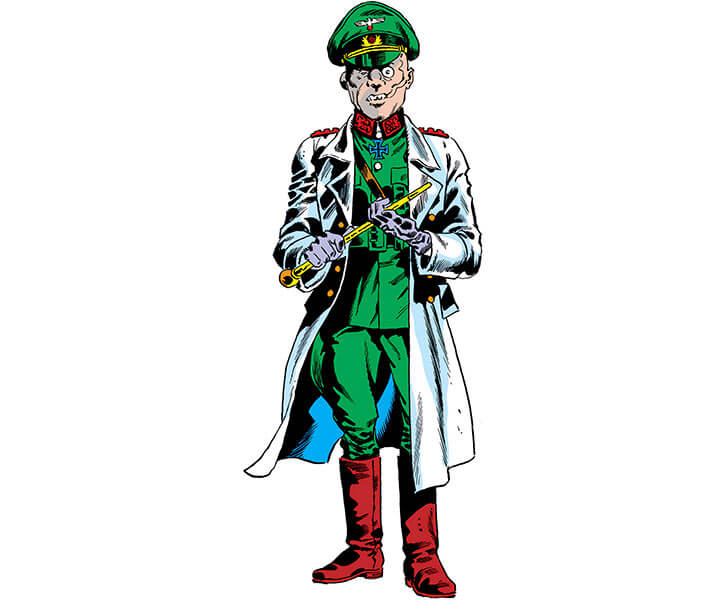 Dr. Kronsteig was one of the most brilliant minds in Germany during the early XXth century.

Being a dedicated Nazi, he eagerly joined the war effort of the Reich as a scientist.

For decades, he lived as a fugitive. Then he came to work for Doctor Doom, in Latveria. He was there when Doom clashed with the Fantastic Four for the first time.

As part of his projected revenge against the foursome, Doom worked with Kronsteig on a size reduction ray. They finished a working prototype.

But in 1962, Doom got rid of Kronsteig. He hated Nazis, and had always expected that the researcher would betray him anyway. Doom tested the ray on Kronsteig until the German became infinitesimally small.

Herr Doktor Kronsteig was thus one of the first Earth persons to discover a microverseA reality that exists on a infinitely small scale. And entire microverse is much smaller than an elementary particle.. He landed on an alien world, populated by strange, orange, sentient amphibians.

The Shaper of Worlds had been orbiting that planet for a long time. He had greedily plundered and exhausted all the dreams of the natives.

The Shaper therefore welcomed the arrival of a new person. He made Kronsteig’s dreams a reality.

As a result, the micro-world was turned into an illusory duplicate of Earth. It was dominated by a Third Reich whose Führer was Kronsteig. In this reality, he was personally leading the final invasion of the USA.

Ten years passed on Earth. One suspects that at least as much time elapsed in that microverse. 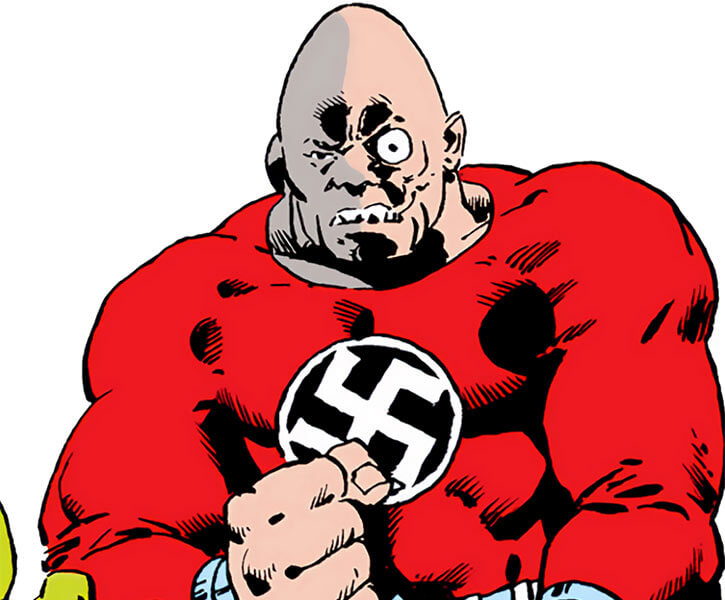 Then came the incredible Hulk (Bruce Banner). Landing in a war-torn New York City, Hulk was recruited by the beleaguered American military.

The jade giant proceeded to single-handedly win the war in New York. He beat back Axis troops until he could attack Kronsteig’s command post.

Furious that an intruder was wrecking Kronsteig’s dream, the Shaper of Worlds browsed through the Nazi’s mind. He sought something to beat the Hulk with.

This is how he found an old project of Kronsteig. These were treatments to create a super-man dubbed “Captain Axis”.

The Shaper turned the scientist into what Captain Axis would have been, had the project been a complete success. How far the Captain Axis project went in the real world, or whether it was even started at all, is unrevealed.

As Captain Axis, Kronsteig fought against the Hulk. But the Hulk once again proved that he is the strongest one there is.

Kronsteig came to doubt the power of his Captain Axis dream. That made the Shaper of Worlds unable to sustain the Captain Axis form.

The Shaper gave up in disgust and left after banishing the Hulk. Kronsteig was apparently left behind.

An aged, ragged fugitive who remains a die-hard believer in the Nazi dream.

“Well, brute… you begin to perceive I spoke truth ?”

“There will be no smashing, monster, not by you, not by that great green paw — which my own fist shall now reduce to pulp !”

Kronsteig might reemerge from the microverse to find himself in the DC Universe, rather than in the Marvel Universe.

He might also have discovered how to truly make Captain Axis a reality after his experience with the Shaper of Worlds.

In the DCU, he might become an ally of Captain Nazi. Perhaps he would enhance Nazi to new heights thanks to his Captain Axis knowledge and secret Nazi science.

He would be trivial to add in the Wolfenstein setting, as a colleague of Dr. Quarkblitz. Though his power level would have to be reduced. 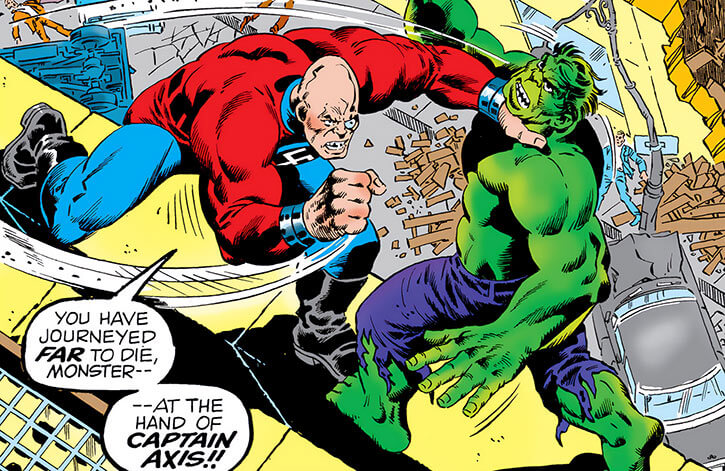 Since there’s so little material, the stats are speculative.

They are a slightly optimistic take based on the few panels where he’s seen fighting the Hulk. 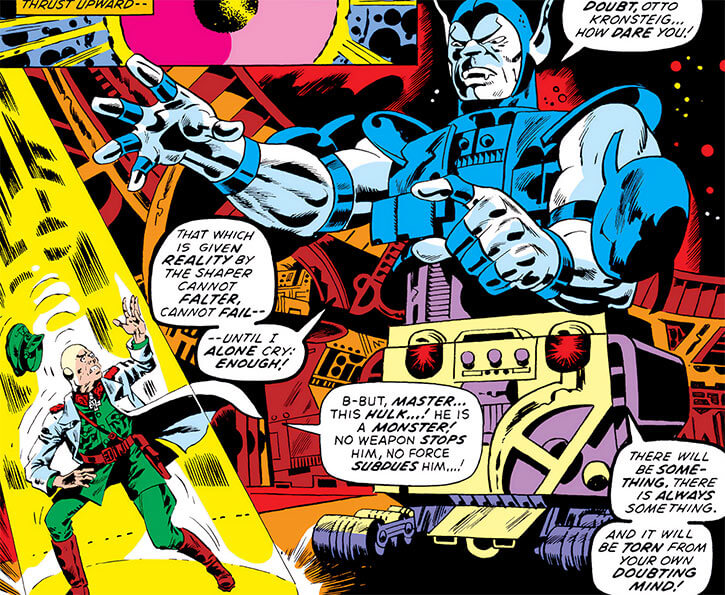 Since there’s so little material, the stats are both speculative and barebones. They are a slightly optimistic take based on the few panels where he’s seen fighting the Hulk.