He is also a trained combatant.

A native of the African country of Azania, Commander Blaze, originally Captain Blaze, was inducted into the national superhero team, the Supremacists. When a shadowy cat-like being began murdering government officials, suspicion fell on T’Challa, the Black Panther, head of state of the neighbouring country of Wakanda.

The Supremacists were sent to capture the Black Panther. They stormed the Wakandan council chambers. But T’Challa managed to evade their initial attack, and drew them into the jungle. He managed to pick them off one at a time, taking Captain Blaze by surprise, and knocking him out with one hit.

Azania changed after the Panther struck, allowing General Oostkamp to seize power with a biracial militia. This incensed the white racists, who formed a militia of their own, leading to civil war. Blaze, Hungyr and Harrier II were on the side of the racists.

In 1995, their side attempted to take down the (Black) US ambassador, who was rescued by Night Thrasher. They also attacked the Wakanda embassy in Azania, with Blaze torching the place and attempting to kill the ambassador. But he was saved by Night Thrasher and the Panther. Blaze was arrested by Wakandan troops.

Confident in his abilities, and professional in combat, Commander Blaze is a patriot, who takes pride in serving his country. He prefers to attack from a distance, and is capable of coordinating his attacks with those of his team mates.

He dislikes White Avenger, due to his overwhelming arrogance. He is an extreme racist, even violently avoiding physical contact with non-Whites.

In his latter appearances, his sanity seemed to have taken a turn for the worse. He was somewhat raving, with strong paranoid and pyromaniac overtones.

“Prepare to get your fur singed, kitty !”

“I always hit what I aim at, Avenger ! Don’t give me grief because you did nothing !”

“It’s Commander Blaze now ! I’ve had an upgrade in rank *and* powers !”

“Animal ! Take your hands off me ! You soil me with your foul touch ! I will purify myself with cleansing fire ! We will all BURN !”

Bonuses and Limitations:
Force Shield is Contingent upon Flame Being (-1).

As Captain Blaze he had a High level connection to the Azanian government, and his only powers were Flame Project at 08 APs, and Flight. 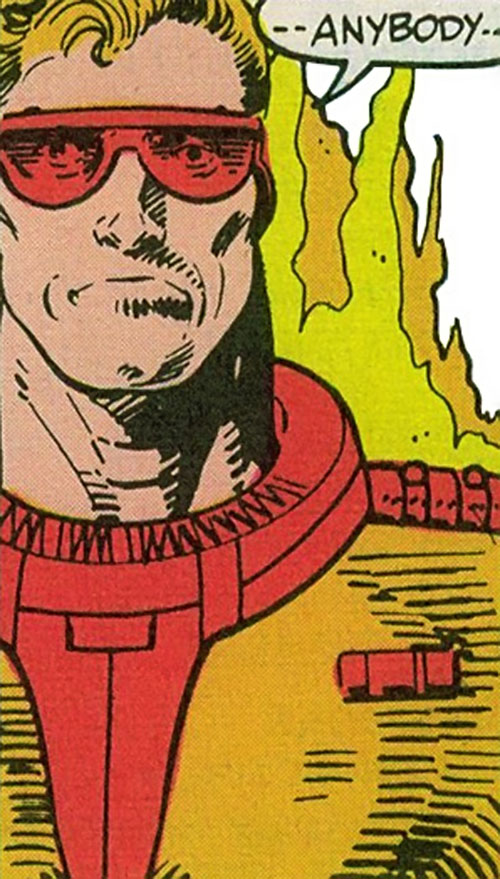 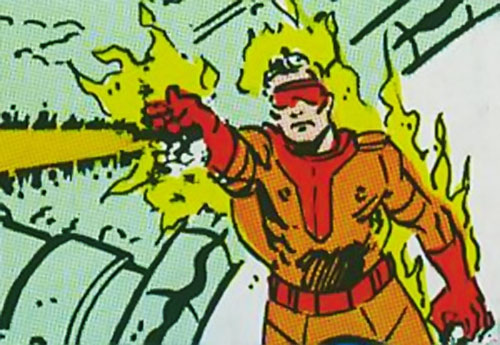 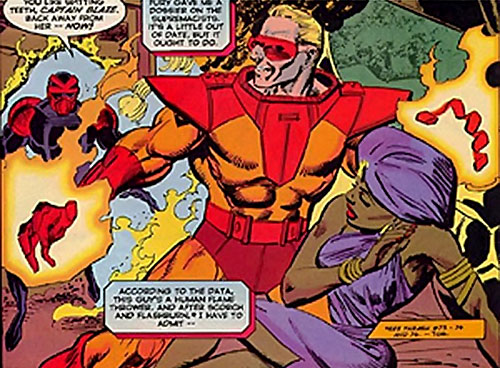