Captain Boomerang is a very, very Silver Age  villain, who appeared in 1960. He was a member of Flash (Barry Allen)’s rogue gallery, since throwing bent sticks to take down a guy who runs at the speed of light makes obvious sense.

This character underwent a successful reinvention during the 1980s Ostrander/Yale run of Suicide Squad. He was portrayed as such a miserable waste of skin that he actually ended up being attaching. This profile is chiefly about this version of Captain Boomerang.

Captain Boomerang has only one special skill: he is probably the best boomerang-thrower in the whole world. He can throw six of them at the same time and bullseye all.

He uses an array of special boomerangs (sonic, explosive, etc).

Secretly the illegitimate son of an American soldier and an Australian woman, George “Digger” Harkness was raised in poverty. During his childhood he developed great skill in making boomerangs, and in using them as weapons.

As a young adult, he was hired as a performer and boomerang promoter by a toy company which was, unbeknownst to him, owned by his biological father. Audiences ridiculed him.

One day, during a toy exhibition, he saw the Flash II in action, and KOed him with a lucky throw. Seeing the public impressed, a resentful Harkness turned to using his boomerangs for crime.

Although he lacked any actual superhuman abilities, he became a recurring enemy of the Flash. He typically devised altered boomerangs which could produce astonishing effects, and used them ruthlessly. During that time, he become a member of the second Flash rogues gallery, becoming friends with some of them (as Captain Cold).

During a stay in prison, he was contacted by colonel Rick Flag Jr., who offered him a place into the reborn Task Force X (Suicide Squad) to fight the monster Brimstone during the Legends crisis. If he survived, he would recieve a pardon for his crimes. 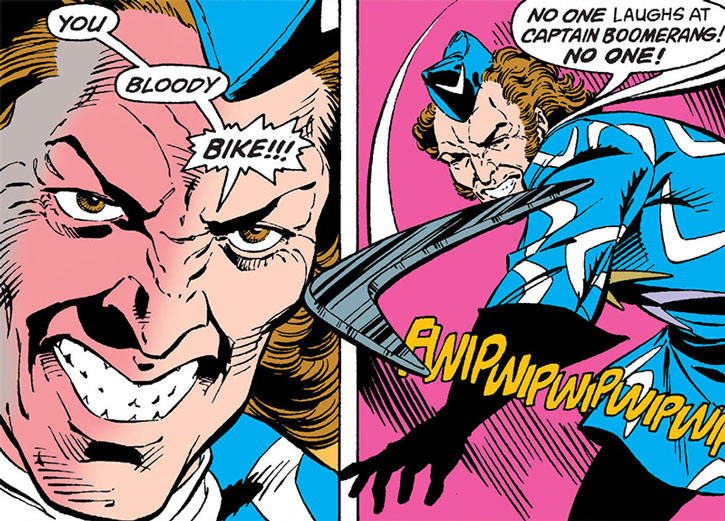 Boomerang accepted and survived. But just after leaving jail he started a crime wave, jeopardizing the secret of the Squad. He was captured and forced to rejoin the Squad.

During this time on the Squad he returned home briefly and learned that Wiggins was his real father.

Boomerang was a regular member of the Squad during all its run. Most of the time he was a pain in the butt. At one moment, after obtaining an apartment in New Orleans for his free time, used the identity and gear of the deceased Mirror Master to steal again. He was discovered by discovered by Waller (Task Force X director) and lost his apartment.

As a vengeance, Boomerang started the infamous “cream pie-thrower” incident. He started throwing cream pies from the shadows to everyone’s faces for weeks. He even shot himself with a pie using a boomerang effect to distract attention away from him.

When the Squad was finaly disbanded, Boomerang restarted his criminal career. He was one of the Rogues who accepted the deal with the demon Neron and ended in Hell, being rescued by Flash III.

His experience in Hell did not seem to change him much, but near-fatal injuries at the hands of the Dark Flash embittered him. He declared revenge on the latest super-speedster, and with help of his Rogues friends created the living weapon Replicant.

Boomerang was healed by the Joker’s venom, but then he disappeared from public view. After a life full of failures, Boomerang’s career was at his bottom. He was fat and old, nobody respected him, and he was completely alone.

At this moment, he heard rumours about an unknown son (Owen Mercer). After meeting him, the two soon connected. Digger even started teaching him how to throw boomerangs.

Boomerang acceptad a job: killing Robin III father, Jack Drake. But Drake had been warned and armed. When Boomerang came into Drake’s house, the two men killed each other at the same time. Owen take the mantle of his father becoming the second Captain Boomerang.

Digger was described by a psychologist as a borderline sociopath. He had no respect for authority or other people’s feelings, and would avenge any insult, no matter how minor, in flamboyant ways. He was always grumbling and snivelling about the mission, the team, the weather, etc.

Most people thought Digger was a cowardly worm, but considering his power level, being a worm is a good way to survive. Notably, he was one of the few squad members to survive all the missions, when more powerful villains as Blockbuster I or Mr. 104 died in action. He hadn’t any problem in shirking while his partners where fighting a superior menace.

He also hadn’t problems manipulating other people. Once, he lied to Slipknot, telling him the explosive bracelets they wear were a fake. When Slipknot fled and his bracelet exploded, Boomerang thought now he could be sure about that thing.

Boomerang considers himself a lady’s man, but the fact all the pretty women rejects his advances tells otherwise.

In combat, Boomerang surprisingly shows some degree of honour, never attacking by surprise. It’s also surprising he never tried to fled the Squad, even when he has a clear opportunity.

The only people Harkness is friendly to are old-school villains, his Rogues mates and his son, Owen, about who he fell an automatic paternal love.

“It’s not a bloody children’s toy. It’s a refined and elegant *weapon* which, in the hands of a *master* like yours truly, can lop yer bloody head off !”

“Heard you were tough, Duchess ! O my yes ! First time up against Firestorm, he strips you butt naked ! Am I right ? Second time out and you blow y’self unconscious ! I mean, it is to laff ! Then you get punched out by Captain Atom ! Gonner come on this mission and soil y’self, most like !”

“The droob’s up the steps, eh ? No problem. Say, what yer think after this is over, you an’ me we go get ourselves rotten, eh ?”

Waller: “His arrests, however, have consisted entriely of minorities. Blacks, Asians, Latinos.”
Boomerang: “Well, that only stands to reason, don’t it ? I mean, it’s a well-known fact they *do* most of the crime, innit ?”
Bronze Tiger: “The only *known* criminals I see *here*, m’man, are *white.*”
Boomerang: “Ahhh, I’m talkin’ street crime here, Tiger me lad ! We’re *different,* ain’t we ? I mean, I don’t see no bloody abo bein’ an artist like ol‘ Chronos here, can you ? No offense !”
Chronos (disgusted): “Jeez !”
Boomerang: “No, I’m *serious* here !”
Waller: “We’ll raise your social consciousness later, Boomerang. With an axe.”

“Bloody mob o’ drongos ! I letcher go off once without me an’ look how you bugger it ! Makes me maggoty, I swear !”

Slipknot: “Yo, Boomerang ! About hese explosive bracelets here ! Told us they’d blow our arms off if we rabbit. On the up ?”
Boomerang: “I don’t believe it meself, Slipknot, ol‘ myte. Guys like Flag or the Tiger are just too damn decent. Hangs ’em up everytime. Me ? Things get shirty and I’m off for the high country.” (Moments later, after Slipknot’s lost an arm to his bracer). ”So, they’re *serious* about them things. Sorry, Slipknot, me old myte, but I had to know, y’see. And better you‘n me !”

(And from issue #1, Boomer’s classic Squad moment: In battle against a speedster named Jaculi.) “Ah, yer fast, ol‘ chum. No doubt about it. Dogged what was thrown straight atcher. But boomerangs double back, see ?” (An explosive boomerang stuns Jaculi.) “Catch yer when yer not lookin’. Leave yer not knowin’ which end is up.” (Kicks Jaculi off the side of a cliff.) “*That* way’s *down !*” (Watches as Jaculi plummets forty stories.) “Lissen, maybe you can save yerself like Flashie use to do. Use yer super-speed, y‘know ? Form spiral updrafts, spin an’ form whirlwinds. Things like that.” (Jaculi splatters on the ground.) “Tch. Guess yer just weren’t in ol‘ Flashie’s class, myte. Sure as *hell* weren’t in *mine*.”

Drawbacks:
Socially inept (most of all women), Unluck. During his time as Mirror Master he also had secret identity.

Equipment:
The Gliding Power for all boomerangs below is used solely to extend thrown range, with the last AP actually being the return flight.

In the Identity Crisis miniseries, Boomerang was at his lowest moment : fat, old, and considered a bad joke by the rest of the villains community and potential employers. His DEX is a 02, his HP are at 010, he has the Age (Old) Dawback and his Wealth is 002. But on the other hand, he has mellowed a bit, not offending everybody around him constantly (he lost Socially Inept).

A boomerang always come back!

Captain Boomerang can make two attacks with a boomerang one on the forward half of the throw and the second as the boomerang returns.

If he misses his target unwillingly or willingly (Blindside, surprise attack), he makes a Trick Shot. Combining the usual penalty of a usual trick shot with the bones of the blindside attack, Boomerang receives a -1 CS penalty for that “comeback” attack.

The second attack always happens at the end of the combat phase. 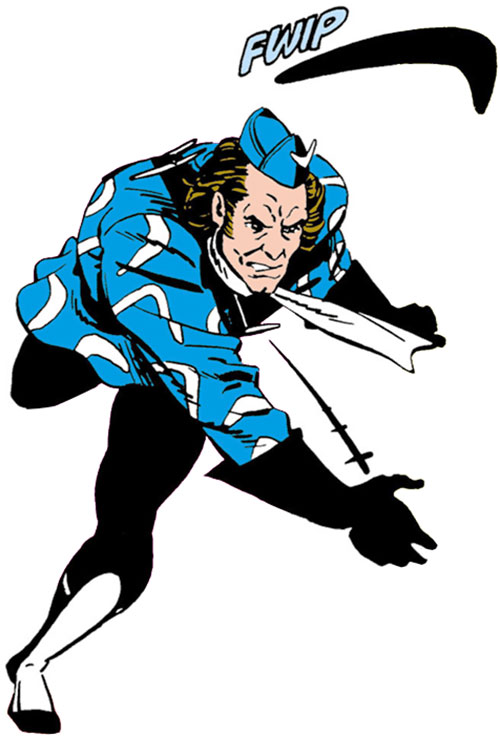 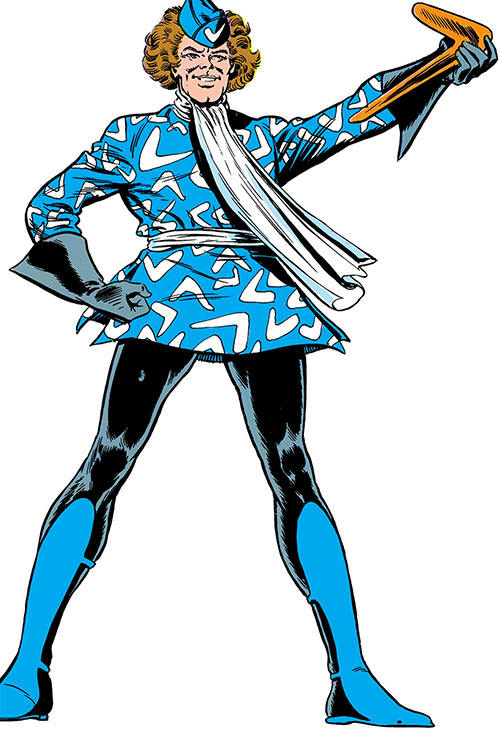 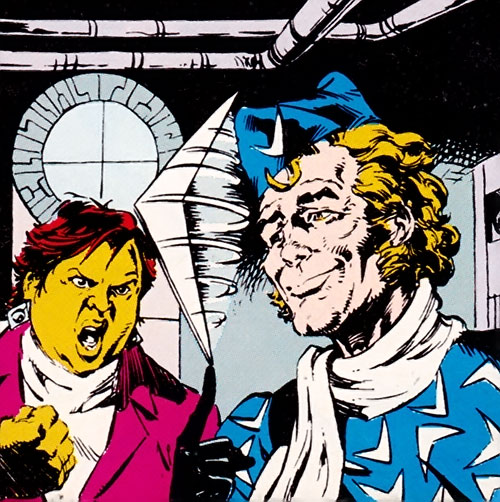