Captain Boomerang has limited super speed. That allows him to run in short bursts and throw his boomerangs at super speeds. He has inherited a natural aptitude with boomerangs, his skill being nearly as good as his fathers.

He has so far only been shown using Razorangs, BOOMerangs and acid spreading boomerangs, but he could possibly have access to more of his father’s specialized equipment.

Caught in a time vortex caused by a battle between the Flash and Zoom, the original Captain Boomerang ended up in the far future, where he met Meloni Thrawne. They had a son, who apparently returned to the present era with the Captain. The kid was put up for adoption.

Years later, tabloid reporters discovered that Captain Boomerang had a son. Owen became a headline for them, although they reported that Golden Glider was his mother. Boomerang, on seeing the headlines, decided to track down his son, and they bonded. Owen enjoyed the time he spent with his father. Furthermore he discovered a natural ability with the boomerang, which brought them closer.

While training together, Owen accidentally threw a razorrang straight at his father. Panicked he rushed to stop it, discovering that he had limited superspeed. Harkness confirmed that the Golden Glider wasn’t Owen’s mother, but didn’t tell him who was.

Soon after this Harkness was given a job to kill Jack Drake, Robin’s father. Jack had been warned, and armed, by Harkness’ employer, and the two men killed each other. When Owen tried to recover his father’s body, he was refused permission by the FBI, who claimed it was because they were tired of supervillains coming back to life, and wanted the body kept secure.

Attending a funeral for his father organized by the Rogues, Owen assumed his father’s mantle. He accepted membership in the Rogues, as long as they helped him recover his father’s body. The Rogues made good on their promise, recovering the body from the FBI taskforce set up to bring them in. Owen followed them in joining the Society, after giving his father a proper burial.

Getting caught up in an attack against the Society by the Outsiders, Owen was left to die by his fellow Rogues, when the situation turned dangerous. He only survived because the Outsiders rescued him. This caused him to reconsider his allegiance, and he later joined the Outsiders.

Owen began searching for Robin (Tim Drake), somehow aware of his identity. Robin originally believed Owen was searching for him to get revenge for his father’s death. But when they met Owen revealed that he wished to make amends with the younger hero, and offered his assistance to help Robin destroy a bomb created by the Joker.

The two spent the following night hitting old hideouts of several villains. As a result of their time together, Robin gained a measure of respect for Boomerang, despite their history. Boomerang offered his hand to Robin, but Tim refused to take it, not ready to go that far… yet.

Owen remains unaware of his mother’s identity, or that he has a brother.

While he does exhibit some of his father’s confidence, he isn’t as loud and annoying. Furthermore, he usually gets on well with people. Despite his brassy attitude, he’s uncertain of his role, especially in the new world he’s found himself. Mercer can be hesitant without strong leadership.

Initially distraught over losing his newfound father, and the government refusing to let him have the body for burial, Owen was easily manipulated by the Rogues into joining them. He was looking to obtain “justice” for his father.

By the time the Rogues left him to die, his anger over his father’s death had lost its steam. He had to make a calm, reasoned decision on what to do next.

“That’s the whole point of a boomerang, right ? You throw it away, and it comes right back.”

“All my life, my damn life, I wanted a father. And you’d think finding out he was some lame villain would disappoint me. But it didn’t. He coulda been anyone. I was just glad he wanted to… to talk to me. To know me. I only wanted to bury his body. He deserved respect – at least in death.”

Prior to joining the Outsiders he had a Low Connections to the Rogues.

Source of Character: DC Comics (based on his appearances prior to the one year gap). 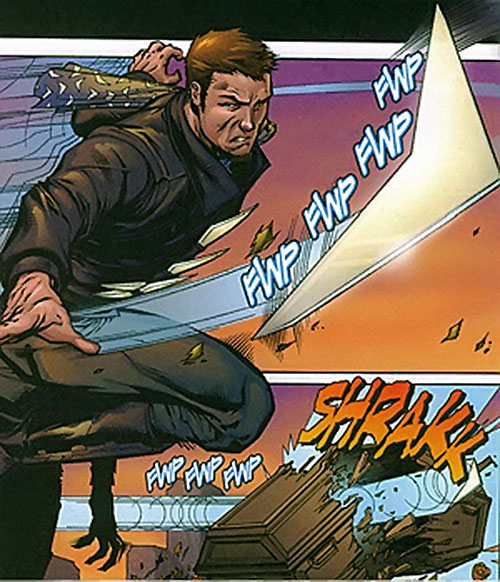