Captain Britain has vast strength (his potential yet to be tapped), has lightning like reflexes and speed, and his perceptions enhanced to an amazing degree. Using his amplifier costume, his physical abilities are all increased, and has a powerful, if limited, force field. The costume also amplifies his latent ability to fly.

Brian is also a fairly skilled scientist, although these abilities are not often used by him during this period.

In another place lived an enigmatic being known as Merlin. His work was to protect the omniverse, through manipulation of others. To this aim, he created the Captain Britain Corps, defenders of the British Realm in many dimensions, numbering in the thousands. They were the champions of Merlin, whether they knew it or not.

Merlin worked with another being who eventually retired and settled down to a normal life on Earth 616 , the Marvel Universe Earth. This entity married and fathered three children, Jamie, Brian and Elizabeth.

Brian was chosen to be this Earth’s champion by Merlin. Brian was a lonely child, never being very good at personal relationships with other people. He had immersed himself into the study of science.

As he grew older, he had several brief, unsatisfactory relationships with women. One, Valerie, who he was with the night his parents were killed in an apparent accident (it was later revealed that they had been killed by Mastermind, a computer created by Brian’s father). Brian withdrew into himself even more.

The pivotal point of his life was when he took a job at the Darkmoor Research Centre, during a break from university. The centre was attacked by the Reaver, and Brian attempted to flee. Merlin then bestowed powers upon Brian, turning him into Captain Britain, who defeated the Reaver.

Brian continued his role of superhero, battling adversaries such as Slaymaster and Hurricane. Eventually, Brian faced more and more mystical enemies. That, along with the fact his powers were also mystical in origin, pushed his rational scientific mind over the edge. He turned quite mad.

During an adventure with the Black Knight shortly after, Brian accepted the existence of magic alongside science, and regained his mind. Merlin decided he was ready for his first true test and sent him and an elfin companion, Jackdaw, to Earth-238. Captain Britain now had a costume which enhanced his physical abilities, gave him a force field and allowed him to fly.

However, Earth 238 was a violent twisted place. All the superheroes had been wiped out by a controlling government, and Captain Britain met resistance from the local forces. Brian met a powerful reality controlling mutant, Jim Jaspers, who was to blame for the state of Britain.

Both Brian Braddock and Jackdaw were killed by Jaspers’ creation, the unstoppable Fury. Captain Britain had failed.

Merlin brought Brian back to life, and returned to his Earth. Captain Britain became a hero again. He battled Mastermind, Slaymaster, the Fury (who had followed him to this Earth). He also fought in another dimension with the Special Executive, where he learned of the Captain Britain Corps.

Shortly after, the James Jaspers of his Earth took control of the country with his reality powers. Captain Britain faced him once more, and was again defeated. Jaspers was killed by the Fury, and the Fury was in turn defeated. The battle, however, had taken the life of Merlin, whose place was taken by Roma, his daughter.

Captain Britain has a large, well defined physique, radiating power. He has blond hair, and is rather good looking, although not overly so. He always carries himself well, appearing fully confident in both himself and his powers.

His costume is based on the Union Jack, a mix of red, white and blue.

Brian Braddock sees himself as a noble champion of Britain, with the responsibility of protecting this great country. He is always very confident. However, he is also arrogant, sometimes belittling to others, and has a quick temper. Brian truly believes he knows best, and can is sure he can handle any situation.

Brian will quite often enter killing combat when he gets angry, or the opponent is endangering others.

“I’m in a parallel universe fighting an alternate version of myself alongside a group of parahuman mercenaries who want me to help the wrongly accused Majestrix of… do you ever get halfway through a sentence and find yourself unable to believe that you’re actually saying it ?”

As Captain Britain’s exposure to mainstream Marvel heroes is very limited at this point in his career, his history would be pretty similar, if not the same.

Equipment:
AMPLIFIER COSTUME [/DEX/ 08 /STR/ 09 /BODY/ 07 BODY 07, Flight: 10, Force Field: 04, Mystic Field: 04. Force and Mystic Fields are limited to range of self, and Brian may attack through them. If the costume is being used without the helmet, STR and all powers are reduced by 2 APs].

The costume is a mixture of science and sorcery, although it can be repaired and duplicated as a normal gadget, as well as cosmetically altered.

It should be noted, the /BODY/ attribute represents the suit amplifying Captain Britain’s natural toughness, and not the actual BODY of the material itself. However, as the suit can take quite a fair bit of damage itself, it has been practically destroyed and still working, I’ve kept it with the BODY 07. 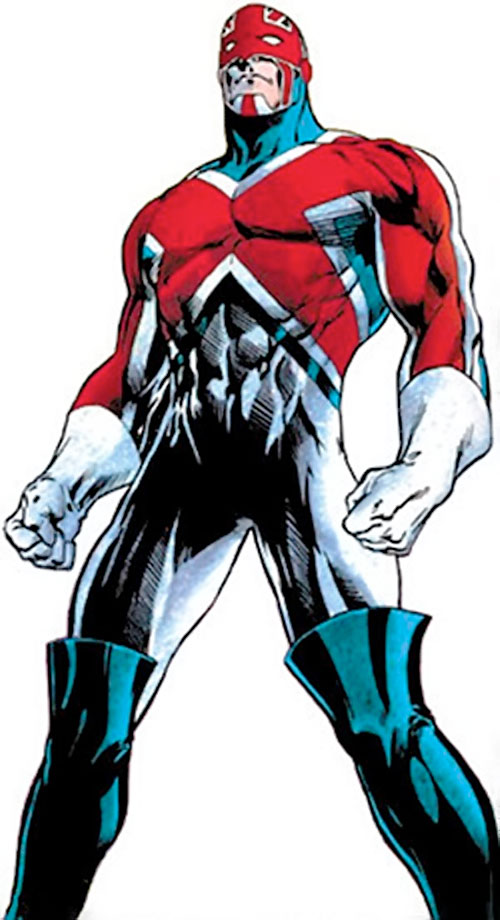 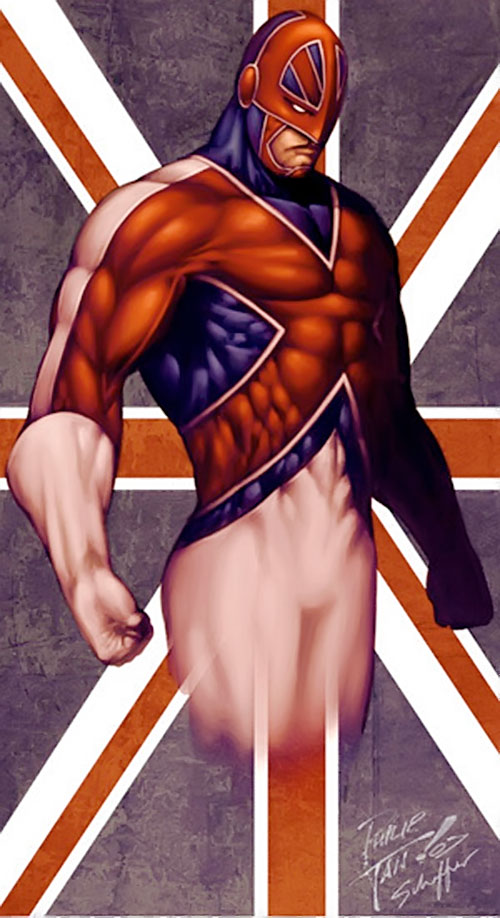 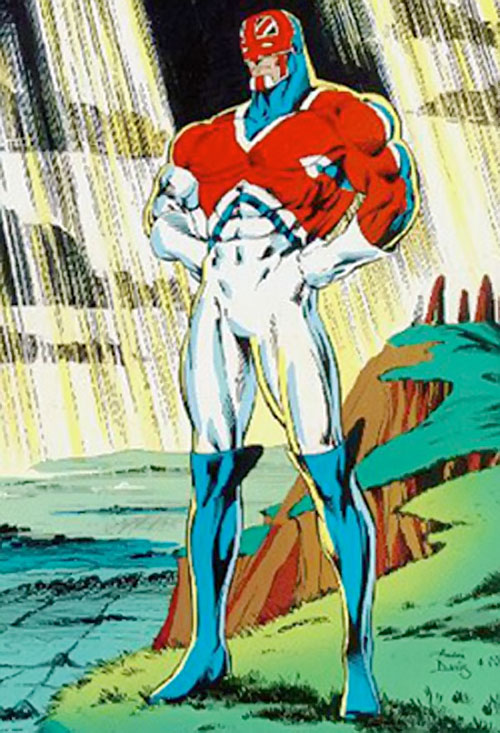 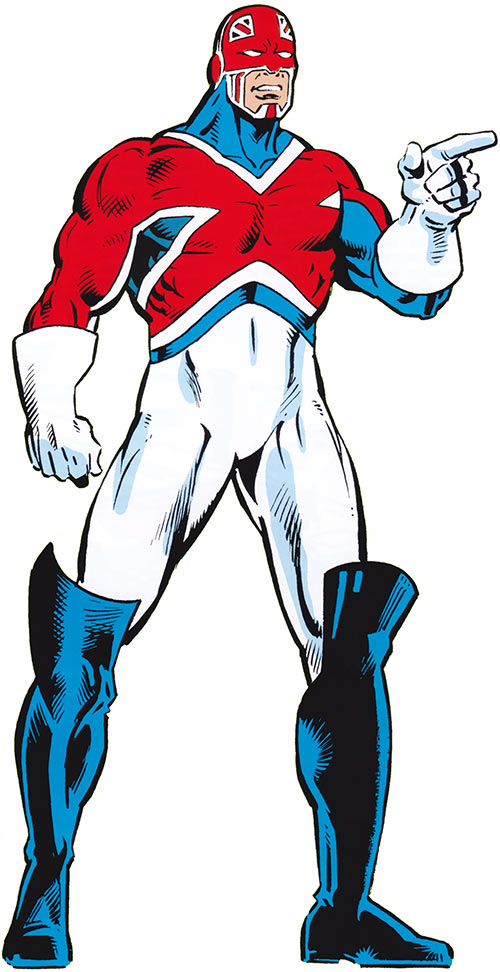