Even before she became Captain Britain, Leigh was a woman of uncommon courage. She was willing to pick a shield and defend a perfect stranger against superhuman assault unto death.

She’s also an English lit and history teacher, with an encyclopedic knowledge of her field.

As the new Captain Britain, her body has been enhanced. She now has superhuman strength (presumably “Class 10”), durability, speed and reflexes.

She also wield a weapon that works much in the same way as the Star Sceptre did for Braddock. This stick is either a transmogrified  Sword of Might, or something that magically replaced it. In one panel she’s wielding the sword, seconds later it’s the stick and nobody seems to notice or comment about that.

Tepid mysteries of the Pointless Curse

For some illogical, unexplained and baseless reason, Captain Britain III cannot reveal that she is Kesley Leigh to her children, lest they quickly die through mystical means.

In DC Heroes terms her kids are still something of a Dependent to her, but not entirely. She does not provide for them, cannot spend much time with them, they have no special emotional link toward Captain Britain III, etc..

She also has a Secret identity – but not really, since her identity as Leigh is dead. This unique, Drawback she’s been afflicted with is worth 15 points.

Kelsey Leigh is a mum of two living in Ipswich – in south-east England or East Anglia, depending on how you consider things. She used to be a schoolteacher. One day, criminals invaded her home and assaulted her. She vigorously resisted them, while her husband was paralyzed with fear.

Leigh received a bad slash blow across her face with a broken bottle, which left a ghastly scar. The incident led to a divorce, and she quit her job to become a homemaker. It also led to her being ostracized by much of Ipswich’s population.

The shadow over Ipswich

Why are Ipswichians hostile toward Kelsey ? Among numerous stabs at Austen’s writing, the following possibilities emerged :

Years later, while strolling downtown with her kids, she stumbled upon a brutal battle between several Avengers and the Wrecking Crew. Captain America moved in to protect Kelsey and her kids, but was knocked out by an agent of Morgan le Fay masquerading as Thunderball (Eliot Franklin).

Leigh immediately moved in and picked up the shield to defend Cap, and create a diversion so her children could run away.

Hammered by the Thunderball impostor, Kelsey was left fatally wounded. Her sacrifice gave time for She-Hulk (Jennifer Walters) to move in and save Cap. But the former schoolteacher was pronounced DOA at the hospital.

Kelsey s spirit was picked by the astral forms of Brian Braddock and Meggan, who had been captured by Morgan Le Fay. To defeat Morgan, Braddock decided to transfer the Captain Britain powers to Leigh, as she had just demonstrated the necessary courage.

In a reenactement of the choice Merlin and Roma had given him decades before, he had the deceased Leigh choose between the Sword of Might and the Amulet of Right. She picked the sword, her primary motivation being to return to life to protect her children.

Her path was set – that of violence. For wildly unclear reasons, that meant she couldn’t reveal herself to her beloved children lest they die of mystic causes. She was then returned to Earth. Furious and distraught that her children had been taken from her, she promptly skewered “Thunderball” with her sword, breaking the glamour .

Morgan Le Fay appeared to collect her agent. This allowed the new Captain Britain to rush her and enter her realm in the Otherworld. She then engaged Meggan’s knights. Meanwhile the Fay attempted to kill Braddock using magical weapons. This would turn Braddock’s death into the destruction of Britain.

Braddock, however, had outmaneuvered Morgan. Wounding his body with mystical weapons no longer harmed the land of Britain, since he had the Captain Britain power transferred to Kesley during the ceremony. Morgan attempted to assault Captain Britain II instead, but she and Captain America defeated her.

Joining the Avengers for about five minutes

The Avengers took Kelsey Leigh’s children and elderly mother into custody. Arrangements were made to have both the Maria Stark Foundation and Janet van Dyne’s assets provide them with a stipend.

Kelsey, however, couldn’t reveal to the kids she was still alive and was now Captain Britain. She had to let them believe their mum was dead, and couldn’t be with them as she longed to. Twas unbearable for her. With her life destroyed and wanting to remain where she could see her children, Captain Britain II chose to join the Avengers.

Captain Britain had barely settled in when the Scarlet Witch, in a fit of insanity, destroyed the Avengers from within. During the initial assault, a possessed and warped Vision summoned in five Ultron robots. Overwhelmed by such massive power, Captain Britain went down fighting. She barely survived, ending in critical care at Beth Israel .

Leigh apparently fully recovered, in time for the last meeting of the team as it had little choice left but to disband. She thanked her colleagues and announced that she was returning to England as a changed woman with a renewed sense of purpose. No mention was made of her children.

Given the context, one assumes that something happened during her near-death experience, presumably mystical in nature.

During her first few hours, Kelsey wore the original Captain Britain costume in red. When Braddock was freed he changed the colour scheme to something darker.

Her terrible facial scar has been healed when she was resurrected. However when she left the team a scar was again clearly visible across her face, albeit much less severe than before. This might be a continuity mistake, or it might be that her near-death experience altered the enchantment.

Kelsey is a loving mum, and her children were pretty much her entire life. This left her in a terrible situation when she became Captain Britain. She also has serious buried anger and post-traumatic stress disorder issues. The attack by the men who tried to rape her and left her disfigured has left bad scars on her spirit.

While she pretended nothing was wrong with her for the sake of her kids, she is actually liable to unleash serious violence. Especially if she is attacked by a brutal, overbearing man. She is not actually misandric, but male opponents who like to hurt women for the sake of it will likely be attacked with lethal force.

Generally speaking she had a temper and her attitude due her suffering, though she seemed to feel much better and be at peace when she left the team.

Kelsey enjoys referring to classic texts when appropriate, but she doesn’t run around quoting stuff willy-nilly.

Martin : “Hey mum, it was only a pound ! Can you believe it ?”
Kelsey : “Well, who wants to buy a picture of Captain bleedin’ America in Ipswich ?”

(Quoting Frederick Douglass) “The weak […] have had practically no right that the strong felt bound to respect. The slayers of thousands have been exalted into heroes, and the worship of mere physical force has been considered glorious.”

Drawbacks:
SIH of men beating women, Misc: certain Mystical attacks against Captain Britain will damage the land of Britain (catastrophes when she is wounded, destruction if she is ever killed), Misc. : Pointless Curse (see the P&A section). 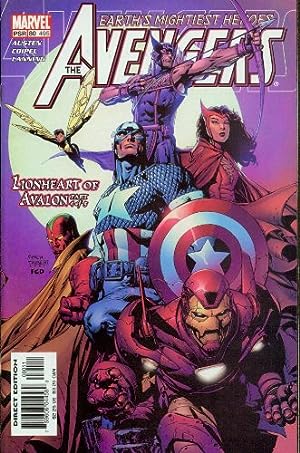 Avengers Vol. 4: Lionheart of Avalon (if you dare !)