Before his late night encounter with aliens, Tom Evans was an exemplary R.C.M.P.  officer and C.I.S.O. agent. After being struck by the aliens’ strange ray device, his physical abilities increased dramatically. His agility and related skills are at Olympic levels while his endurance is at human maximum.

During the course of his adventures, Canuck displays near superhuman levels of strength. Examples include turning over a jeep and pushing a car along on its side.

He is an expert pilot, marksman, martial artist, and equestrian.

Captain Canuck’s mental attributes are equally impressive. He is a phenomenally perceptive detective with an eidetic memory which allows him to remember every “mugshot” he has ever seen. Furthermore, Canuck has a commanding presence befitting a national hero.

Finally, Tom is equally at ease speaking English or French.

In an alternate near-future timeline, Canada, due to her vast store of untapped natural resources, has become the most important and powerful nation on Earth. Those same natural resources, however, make her an irresistible target for attack and invasion by the rogue nations of the world.

Before long, C.I.S.O. agents were being sent to allied nations to combat terrorism around the globe. It is into this globe-spanning antiterrorist organization that two young brothers, Tom and Mike Evans, were recruited. Both superb R.C.M.P. officers, their peers and superiors often joked that the Evans boys came as a matched set.

One fateful night, Tom Evans was leading a camping trip for a group of scouts. Tom awoke in the middle of the night to discover the boys missing from their campsite. He trailed them through the wilderness and found them mesmerized by an alien landing party.

Startled by Tom’s sudden appearance, one of the aliens fired a strange ray device at him. Tom blacked out.

When he awoke in the morning, he and the boys were back at their campsite unharmed. The events of the night before were only a half-remembered dream.

Power of the North

Within days, Tom discovered that his strength, agility, and endurance had doubled. His C.I.S.O. superiors noticed his increase in power, as well, and chose to capitalize on it by creating a living symbol of C.I.S.O. authority and power. Tom Evans became Captain Canuck.

Not long after, during an ill-fated mission, Mike Evans was crippled when he jumped into the line of fire and was struck by a hail of bullets meant for Tom. The team of Tom and Mike Evans was no more.

C.I.S.O. soon paired Captain Canuck with another costumed agent code-named Bluefox. This agent proved to be a traitor to the organization and Canuck was once more a solo operative.

Even though he became involved in cases with C.I.S.O. agents Redcoat and Kebec and battled alongside Lord West and Stardance, the leader and second- in-command of the independent antiterrorist agency Earth Patrol, Canuck believed he was being treated more as a public relations tool and figurehead than as a capable field agent.

As a result, he chose to resign his commission with C.I.S.O. and work for the Canadian government and Earth Patrol only on selected cases.

Then, the nightmares began. Captain Canuck dreamt of alien spacecraft and blazing laser beams and a night of terror in the Canadian wilderness. He soon learned that the aliens who granted him his increased abilities had returned.

Surfing with the aliens

In addition, he discovered that the boys who had accompanied him on that fateful camping trip years before were being used as sleeper agents by the aliens to steal sensitive government information. Convinced that interstellar war could be averted, Canuck persuaded General Sunn, commander of C.I.S.O., to allow him to meet with the aliens.

Gaining entry to the alien spacecraft via a teleportation device in one of their secret Earth stations, Canuck battled Nyro-Ka, the alien whose rash blunder with the ray device resulted in Canuck gaining his enhanced abilities.

During their confrontation, the two combatants tumbled through a strange portal that sent them back in time to 1040 AD where they became embroiled in a battle between Micmac Indians and Viking invaders. Ka and Canuck used alien technology deposited on Earth centuries before man first appeared to return to their proper time.

But the Earth forces, fearing that Captain Canuck had been killed, launched an attack on the aliens. In the ensuing chaos Canuck was cut off from all hope of escape but one. He dove back through the time portal and found himself in present day Canada.

After solving a mystery involving murder, betrayal, and a Nahua treasure worth half a million dollars all while helping to fight “The forest fire of the century”, Captain Canuck resolved to make a name for himself in his new time.

Captain Canuck is a broad-shouldered, square-jawed, and powerful looking man wrapped in the maple leaf flag of his homeland. His thick-cuffed boots and gloves are white as are his trunks. His leggings are red while his shirt is red and white.

His white cowl bears a large stylized maple leaf across the forehead and his red belt has a similar image on the belt buckle.

In his civilian guise as Tom Evans, his taste leans towards the utilitarian; jeans and work shirts. His dark complexion and high cheekbones betray his mixed Anglo-Indian heritage. An attractive man, he has an open, easy smile and intense eyes.

Captain Canuck is a national symbol and takes his responsibility as such very seriously. He represents all that is noble in the Canadian spirit: determination, honesty, and compassion. He has a profound love for Canada and its people and will leap to their defense whenever necessary.

Tom is also a quietly religious man. On more than one occasion, when his abilities did not seem equal to a task before him, he has called on God for help.

The reason for his subsequent success at all of these tasks is, of course, a matter of GM discretion although it might not be inappropriate to give Canuck a version of the Luck Advantage, perhaps renamed Faith.

“You may want to just give up and die but I’m going to go down fighting.”

Looking heavenward, while imprisoned by the nefarious Mr. Gold: “Please help me to stop Gold ! …To save my country ! The aliens made me stronger but I’m not strong enough ! …I need help to break these ropes…”

If the portal that allowed Captain Canuck to escape the destruction of the alien spacecraft had a dimensional as well as temporal facet, Canuck could appear in the current DCU with all his previous adventures intact.

If Canuck’s escape brought him to the DCU several years ago, he might have been an ally or even full- fledged member of the Global Guardians.

This would have led to a brief stint with Justice League America during the Blue and Gold era. No doubt, Canuck would have quickly grown tired of either Batman’s obsessive personality or the rest of the team’s juvenile behavior and returned to his native Canada.

In an amalgamated universe, Canuck might have been recruited into Alpha Flight. How this might effect the existing patriotically attired Vindicator / Guardian is unknown. In addition, Canuck most likely would have been friends with Captains America and Britain.

Equipment:
CAPTAIN CANUCK COSTUME [BODY 05, Cold Immunity: 03. Advantage: The costume’s cowl features the image of a large red maple leaf emblazoned across the forehead. This maple leaf design has been reinforced with impact absorbing materials. Any Killing Combat “headshot” Damage which strikes this image is reduced to Bashing Combat Damage].

During the course of the series, Captain Canuck slowly begins to exhibit a nearly superhuman level of strength. The stats listed below are for Canuck circa the last few issues of his series. For an early “Canuck in training” version of the character a STR: 04 or 05 might be more appropriate.

Source of Character: Captain Canuck #1-14 and Captain Canuck Summer Special #1 published by Comely Comix and CKR Productions. The version of Captain Canuck published more recently by Semple Comics is a different character who bears little more in common with the “classic Canuck” than a name and costume. 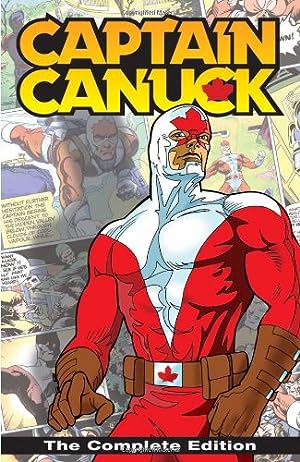 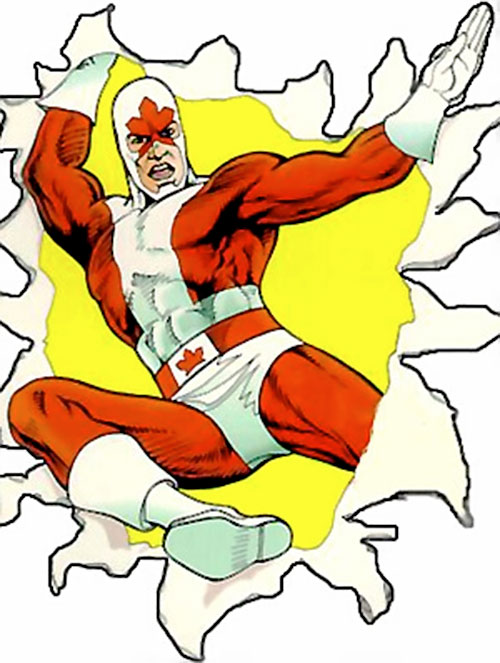 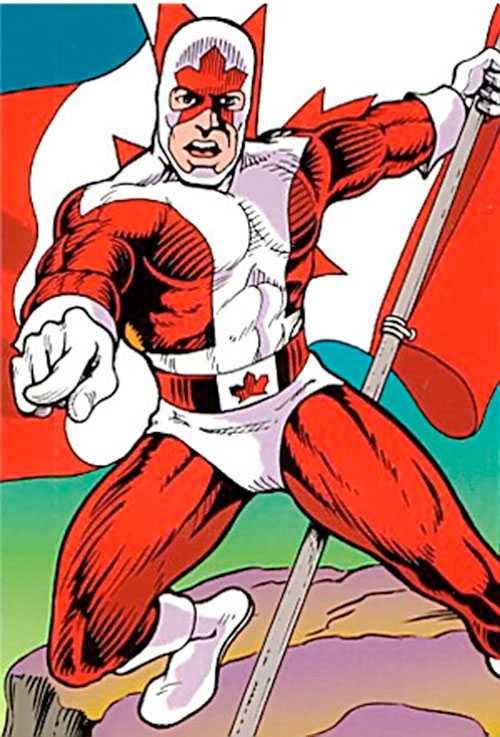