Captain Caveman is furry, so he has that going for him. He also seems extremely proficient in wielding a gigantic club which contains any gadget that happens to be handy at the time. The club also allows Cavey to fly.

Cavey’s voice is capable of projecting in a manner powerful enough to break glass and other surrounding fragile objects – this is generally a problem only when Cavey sounds his “battlecry” and hollers his own name.

Kind hearted and stupid. He is lovable and friendly, but his inability to grasp modern conveniences and social customs makes him something of a bull in a china shop at times.

Captain Caveman was a prehistoric superhero (apparently in Bedrock) and interacted on occasion with the Flintstones. During this period, he had a son named “Cavey Jr.” At some point, he became frozen in a glacier. He was unfrozen by three teenage beauties.

They took him around in their van, solving mysteries across the country. And he could fly. Young boys of the world, set your envy-meters to “overload.”

The captain’s powers of flight came from his multi-purpose club, which could pop open to produce any gadget necessary to defeat the villain. Sidekick Cave Bird was also on hand to keep his master’s devices straight.

The girls, known collectively as the “Teen Angels,” were brainy Brenda, scaredy pants Taffy and easygoing Dee Dee. Sometime after the girls revived Captain Caveman, but before they began their cross-country adventures together, Cavey competed in the Laff-a-lympics with varying degrees of success.

The intro sequence of the cartoon in 1080p.

He looks like a hairy potato with skinny arms and legs and a face not unlike one might have if one were a prehistoric Mr. Potato Head. He wears a leopard print cape and carries a huge club.

One half of the amazing crimefighting duo, Captain Caveman and ’Mazing Man. Prior to his freezing, Cavey battled Vandal Savage to a standstill and briefly teamed up with Anthro the Cave Boy.

Drawbacks:
Miscellaneous: Cavey has yet to grasp the concept of modern conveniences, like doors, and therefore will leave and enter all rooms with a Charging Attack on the wall. 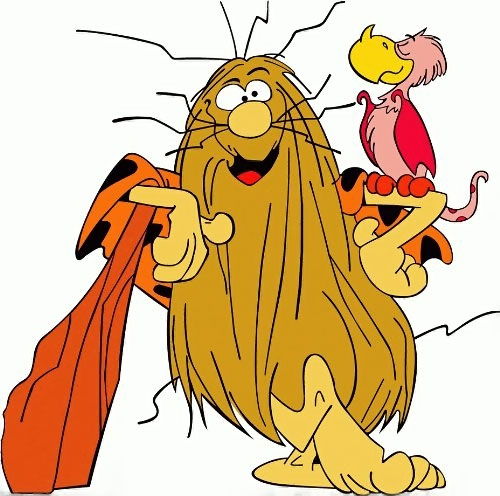