Captain Cold has no powers, but he does possess the dangerous Cold Gun. By utilizing various elements such as liquid nitrogen and liquid helium, the Cold Gun is capable of firing blasts reaching nearly absolute zero in temperature.

These blasts are able to freeze a human being in his tracks, encasing him in a sheath of ice which places the person into temporary suspended animation.

Using the normal moisture in the air, the Gun can also create ice shields, ice slicks and even realistic illusions.

Leonard Snart was raised by an abusive father. He took refuge with his grandfather, who worked in an ice truck. When his grandfather died, Len grew tired of his father’s abuse and set out to start a criminal career.

Snart joined up with a group of small-time thieves. While planning out a robbery, each was issued a gun and a visor to protect their eyes against the flashes of gunfire. This visor design would later be adapted by Snart into his trademark costume. In recent years he added a radio receiver to them which picked up the police band to monitor local law enforcement.

Snart and the other thugs were captured by the Flash and imprisoned, but Leonard Snart was a man who held a grudge. He decided to go solo, but knew he had to do something about the local hero, the Flash.

Snart read an article that theorized that the energy emissions of a cyclotron could interfere with the Flash’s speed. He designed a weapon to harness that power and broke into a cyclotron lab, intending to use the device to charge up his experimental gun. As he was finishing his experiment, a security guard surprised Snart.

Intending to use his gun only to scare the guard, he inadvertently pulled the trigger. Snart then discovered that his weapon had been altered in a way he had never imagined.

The moisture in the air around the guard froze, turning him into a human ice cube. Intrigued by this twist of fate, Snart donned a parka and the aforementioned visor and declared himself as Captain Cold – the man who mastered absolute zero.

Snart then went about committing a series of non-lethal crimes across Central City. He became the first of the Flash’s (Barry Allen) recurring enemies. Cold would often act in concert with other members of the Flash’s infamous Rogues.

But after Allen’s death during the Crisis on Infinite Earths, the thrill was gone for Captain Cold. Bored with life in a Flashless world, Snart gave up villainy and reformed.

Snart and his sister Lisa, the Golden Glider, opened “Golden Snowball Recoveries.” Using the same costumes and weapons they had employed as criminals, they became bounty hunters for hire. They even worked with the new Flash, Wally West, on the odd occasion. 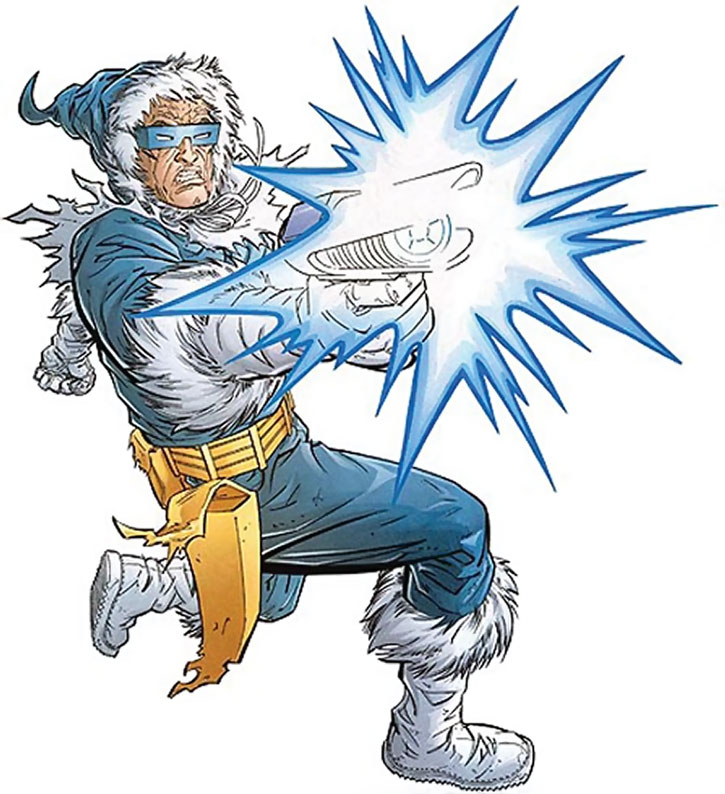 Still, Len Snart could not resist when Abra Kadabra brought him and four other Rogues an offer that would bring them respect. An offer that would “guarantee that they would be remembered forever not as has-beens… but as the most infamous villains of their age.”

What Kadabra did not tell them was that it would cost them their lives. The five died, and unleashed the demon Neron upon Earth.

Neron was not finished with them, however. As part of a convoluted plot to force the Flash into a deal, he sent the Rogues’ bodies to Earth without their souls.

The bank robbers who had so enjoyed matching wits with the Flash were now soulless killers. They commanded vastly enhanced powers, with even more powerful avatars that caused enormous damage and killed thousands. The Flash was able to turn the deal around and force Neron to halt the destruction. This returned the Rogues’ souls to their bodies.

Snart soon returned to crime, this time a member of Wally’s Rogues Gallery. The Golden Glider had abandoned her bounty hunter career and had started partnering with a series of thugs who she dressed in a costume. She armed them with a copy of Captain Cold’s signature Cold Gun, and called Chillblaine.

But the last Chillblaine was a little smarter and more vicious. He murdered the Golden Glider, prompting Captain Cold to hunt him down and torture him. Snart then killed him by freezing his outer layer of skin and then pushing him off a high rise building.

Not long after that, Snart was framed by a new incarnation of Mister Element. Element used his Element Gun to simulate Cold’s gun, using ice and cold to murder several police officers before Captain Cold and the Flash discovered who was actually responsible.

With the death of his sister, and having killed Chillblaine and Mr. Element in vengeance, Cold has again become an unrepentant criminal.

Most recently Captain Cold was declared the leader of the Flash’s Rogue’s Gallery. His skill and experience have made him a strong leader to the likes of the Weather Wizard, the new Trickster, Mirror Master and the new Captain Boomerang.

James Jesse, the original Trickster, was reformed and working for the Federal Bureau of Investigations. The F.B.I. charged Jesse with bringing the remaining Rogues to justice. He recruited reformed villains Heat Wave, the Pied Piper and Magenta for the task.

In the war’s aftermath, Heat Wave and Jesse both “unreformed” and rejoined the original Rogues.

Feeling that the Rogues had to learn to trust one another again, Captain Cold led the villains away from Keystone and onward to greener pastures. He accepted an offer to join the newly formed Society of villains.

Traditionally, Captain Cold was driven by three things: money, women, and the desire to beat Barry Allen. Although not the lech that Captain Boomerang was, Len Snart has an eye for the ladies, particularly models.

He deeply cared for his sister (even if it wasn’t always mutual) and looked out for the well being of his fellow Rogues at all times.

When Barry Allen died, Captain Cold was bored out of his gourd. He often drifted back and forth from walking the straight and narrow to going for the big score. He didn’t really commit to a life on the lam until after his sister’s death.

These days, Cold takes his position as head of the Rogues very seriously. He:

Despite his more ruthless nature as of late, Captain Cold’s heart isn’t completely frozen. He sent flowers to honor Sue Dibny, the murdered wife of the Elongated Man. He also took the younger Captain Boomerang under his wing, acting as a mentor to the kid.

Captain Cold does *not* like to be mistaken for other cold-motif super-villains such as Mr. Freeze, the Icicle or Coldsnap. Being called “Mr. Freeze” in particular really frosts him. (Ba-da-bump )

“They say a hero is only as strong as his villains. Meaning the Flash is more powerful than the whole Justice League of America combined. Go ahead and pick the era, don’t matter. The Flash thinks we’re slow.It’s his nature after all. But what the kid doesn’t realize, there’s a reason the Rogues always get the better of him. A reason we won’t stay locked up, and a reason we always come back for more. What they fail to understand is that what we got here is tighter ’en any of their stupid groups. We steal. We kill. That’s our chip. The Rogues have an unspoken code, a bond stronger than death itself. We watch one another’s backs. To the end.”

“That’s the problem with you new breed. You leap out into the middle of the street, hackin’ and slashin’. Spilling blood because it’s “cool.” You have to learn, crossing that line… ya only do on *special* occasions.” 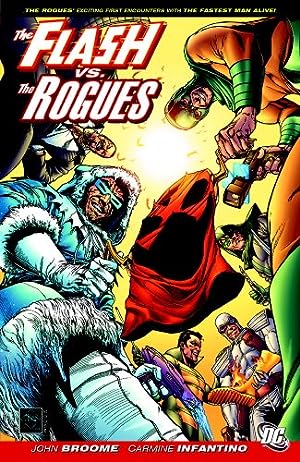 Flash and the Rogues trade paperbacks 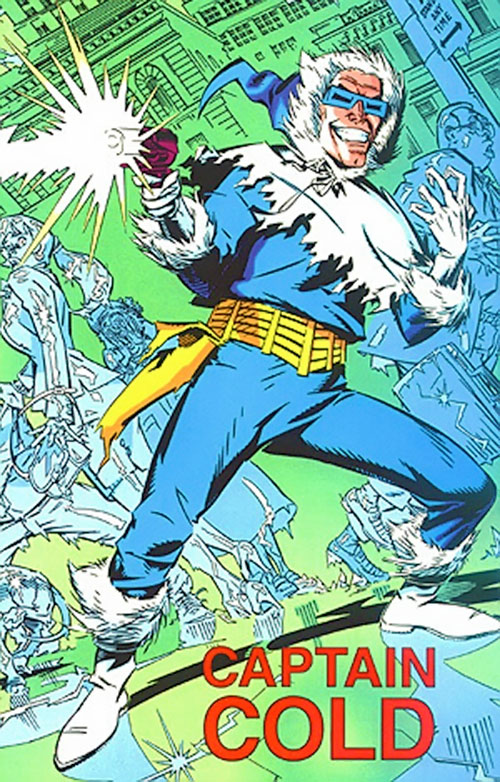