In 1964 brilliant Army physicist Captain Nathaniel Banner was working with the US Government. He helped develop the Gamma Bomb, a deadly new weapon to use against the Communists.

For testing the bomb, the Army decided to use it on an alien ship they had found years ago in Roswell, New Mexico. The ship was made of an unknown metal. But it was useless to the government and they wanted to be rid of it. During the testing, a teenager drove across the testing range, not knowing the Gamma Bomb was being detonated.

But unknown to him, his assistant, a jealous co-worker, never ordered the countdown stopped. When the Gamma Bomb exploded, the ship with Captain Banner inside appeared to be destroyed. In reality the metal of the ship had absorbed the gamma radiation and used the energy to move forward in time.

Awakening in 1994 on the now-deserted testing grounds, Captain Banner found that the alien metal had bonded to his skin. This somehow had given him incredible energy powers, flight, and superhuman strength. He also found that he could absorb the metal into his skin and appear normal.

Taking the codename Captain Gamma, he returned to the US Army. He was made into a super-agent and worked with SHIELD. But heeventually discovered that the assistant that had betrayed him was now a higher-ranking officer in SHIELD and had married the girlfriend Captain Banner had left behind. Leaving SHIELD, Captain Banner set out on his own.

SHIELD still retains the rights to Captain Gamma’s code name and appearance, and has released a cartoon based on him.

Since he’s so proud of it, here’s the entire opening sequence of the smash-hit Captain Gamma and the Gammateers cartoon.

The screen goes blank, then a red explosion occurs. A cartoon drawing of a city covered in thick, heavy clouds emerges from the blast. The narrator, who’s voice you recognize from those telephone commercials, begins:

“At the end of the twentieth century, Earth was in danger of choking to death on her own poisons.” The scene shifts to show cartoon scenes of city streets full of litter and pollution, and fades into wilderness areas, also strewn with litter and toxic waste.

“Earth needed a champion to help save it from it’s own waste. I needed a champion.” Switch to a pretty young woman in a white robe, actually a good likeness of the actress, whom you now remember to be Candice Goldberg.

“I am Aphrodite, the spirit of Earth. Man’s waste and pollution injures me. Needing the help of mortals to intercede on my behalf and their own, I summoned 6 teenagers from six parts of the world to be my champions.

As she recites each of the names, the character, with appropriate colored shirt, is shown rescuing someone or helping them in some way in their native land. “I have given each of these young heroes a ring which will summon a disguise to protect their identity and bring out their inborn power.”

They then transform into all-over body suits and helmets with full-face visors, each matching it’s wearer’s power color.

Aphrodite speaks again:
“In their solar-powered vehicle the Planet Ranger, they travel the earth fighting pollution and decay. But the battle is too much for them alone.”

The teens are shown struggling and retreating from a radioactive waste dump.

“They needed the help of a hero from a simpler period, when things were cleaner and more pure. By combining their powers, they can summon a champion from the past to aid them in their struggle.”

The teens hold their rings high and the beams form into a multi-colored rainbow, which bursts into the sky, forming a vortex. From the vortex bursts Captain Gamma !

The Captain strikes a heroic pose and declares:
“From the vortex of time, I am CAPTAIN GAMMA !”
The kids reply: “GO, GAMMA !”

A woman begins singing:
“Captain Gamma !
He’s a hero !
Gonna take pollution down to zero !
He comes here from a purer time
And he’s fighting on the planet’s side !”

The kids then chant:
“We’re the Gammateers !
You can be one too !
Cause saving our planet is the thing to do !
Looting and polluting is not the way !
Hear what Captain Gamma has to say !”

Captain Gamma lands, points at the “camera” and proclaims:
“The Power is yours !”

A logo proclaiming “Captain Gamma and the Gammateers” flashes over the screen. 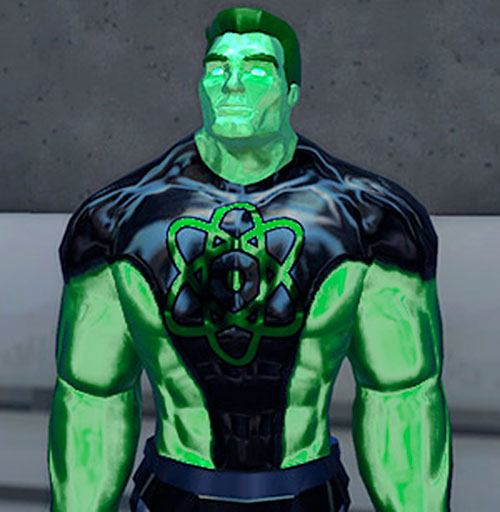