Captain Hammer is a super-strong bully erroneously hailed as a super-hero.

He’s one of the main characters in the Doctor Horrible Sing-Along Blog, a web-series released in 2008 by Joss Whedon, his brothers and Maurissa Tancharoen. It was rather popular back then.

For more context about the story and setting, you should first read our Doctor Horrible character profile.

Captain Hammer is incredibly strong and virtually impervious to physical harm and pain. He is also able to leap great distances, and is nimble enough to land on top of a speeding van with little effort.

Furthermore, he seems to have quick enough reflexes to always get the drop on his opponents except when he’s totally blindsided.

Captain Hammer is a classic glory hound and bully. Little is known about the Captain before his heroic career, including how he got his powers. The way the Captain likes to brag, he might say he sprang fully formed from his parents like a perfect Greek god.

Captain Hammer first encountered Dr. Horrible when the latter tried to blow up the city’s parking meters with exploding coins. Just as he began to pummel the nefarious Dr. Horrible, the silhouette of Bad Horse (the leader of the Evil League of Evil) appeared on a building nearby.

Little did the Captain know when he broke off the beating to pursue the evil equine, that he had just had his first encounter with his future nemesis. He would go on to thwart a number of Horrible’s plots by applying a liberal amount violence.

While Captain Hammer wasn’t a great detective, he did discover that Dr. Horrible shared most of his plans on a video blog online. Watching the blog, Hammer monitored the Doctor’s plots and took great joy in arriving in the nick of time and showing off as he beat the Doctor.

Always on the lookout for attractive women to save, he noticed a cute redhead named Penny when he stopped Dr. Horrible’s Wonderflonium heist, saving her life in the process (at least from his point of view). Obviously, the Doctor had some sort of crush on Penny.

Captain Hammer began to date Penny, who turned out to be an activist trying to help the homeless. When they met, she had been collecting signatures on a petition to the city to prevent the demolition of a building and to use it to start the Caring Hands Homeless Shelter. Captain Hammer took her petition to the mayor and convinced him to do exactly that.

Meeting Penny at the laundry mat to share the news, he was introduced to her friend Billy. Captain Hammer immediately recognized him as his nemesis in a secret identity! Captain Hammer taunted Horrible/Billy, telling him that he was going to sleep with Penny, especially since he knew Horrible wanted her. Unbeknownst to him, this gave Dr. Horrible the resolve to attempt to kill him.

Captain Hammer was revered throughout the city for his role in opening the shelter. Thus, he was asked to be a guest speaker at its opening. During his speech, Hammer bragged about sleeping with Penny and how great he was for helping her open the shelter, causing her to leave the front unnoticed.

During the last moment of his speech/song, Dr. Horrible revealed himself and shot Captain Hammer with his Freeze Ray, immobilizing him.

Dr. Horrible proclaimed that he would kill Captain Hammer with his Death Ray and gave a litany about Captain Hammer’s deceptions, frightening the audience in the process. When the moment came for Dr. Horrible to finally kill Hammer, he hesitated, having a crisis of conscience.

Hammer broke free of the effects of the Freeze Ray and punched Dr. Horrible, sending him and his Death Ray flying. Captain Hammer retrieved the Death Ray and attempted to use it on Dr. Horrible, not realizing that it was damaged. The ray gun exploded, injuring Captain Hammer, and driving him to flee the scene in tears.

The explosion also launched a piece of shrapnel into Penny at the back of the room, killing her.

Defeated, Captain Hammer hasn’t been heard from again, except by his psychologist who appears to be treating him for severe depression and regret.

A physical specimen, Captain Hammer sports a muscular frame and wavy brown hair. He wears khaki fatigues and combat boots along with a t-short emblazoned with his Hammer logo. He’s never without his black leather gloves or combat boots.

Captain Hammer is incredibly handsome, as he’ll be glad to tell you. He’s the epitome of effortless perfection and a living embodiment of good, as he’s quick to point out. He’s a real hero and will make sure everyone around him realizes it. Everyone loves him, or at least should if they know what’s good for them.

He takes delight in humiliating super-villains, especially those who are physically weaker than himself. In many ways, he’s the classic high school jock-bully who sees any “nerd” as a potential super-villain. He is also a glory hound and makes sure to hit on any woman stopping to see his heroics.

He likes to beat his opposition senseless and is remorseless about killing. However, he usually gets distracted by the attention of the press, his fans, and/or a lovely groupie before he gets around to actually finishing off any of his enemies.

“I’m a hero. But if you have eyeballs, you know that already.”

“Stand back everyone, nothing here to see, just imminent danger and in the middle of it ME ! Yes, Captain Hammer’s here, hair blowing in the breeze. The day needs my saving expertise ! A man’s gotta do what a man’s got to do. Seems destiny ends with me saving you. The only doom that’s looming is in loving me to death. I’ll give you a sec to catch your breath.”

Dr Horrible: “You almost killed her !”
Captain Hammer: “I remember it differently.”

“You’ve got a little crush, don’t you, Doc ? Well, that’s gonna make this hard to hear. See, later, I’m gonna take little Penny back to my place. Show her the command center, Hammercycle, maybe even the Hammjet. You think she likes me now ? I’m gonna give Penny the night of her life… just because you want her. And I get what you want. See. Penny’s giving it up. She’s giving it up hard. Cause she’s with Captain Hammer. And these…” (holding up his fists) “… are not the hammer…” (pause) “The hammer is my penis.”

“I hate the homeless… ness problem that plagues our city.”

“Everyone has villains they must face. They’re not as cool as mine, but folks you know it’s fine to know your place. Everyone’s a hero in their own way… in their own not-that-heroic way.”

Captain Hammer could be dropped in as-is. Although, to get the level of attention he seems to get in the Sing-along Blog, he might need an upgrade on his abilities. He might march into Star Labs and demand they find a way to increase his strength.

All the while, he could be planning to pummel the scientists in case they might someday become super-villains. He would probably get along with Booster Gold except they’d eventually become rivals as they fight over the spotlight and the groupies.

Captain Hammer would consider himself a catch for the West Coast Avengers or the Defenders. He would easily believe they would be all over themselves to get him into their team.

Again, he might take it upon himself to give them the pleasure of his membership whether they invited him or not.

Considering that Ben Edlund (creator of The Tick) had a hand in creating several characters in the Singalong Blog, any of the characters could easily be dropped into the “Tick-verse.”

Captain Hammer would definitely try to hit on American Maid and might even out-pose Die Fledermaus.

Equipment:
Although they’re never seen, Captain Hammer mentions the Hammer Cycle and the Hammjet, these are probably standard vehicles with the Hammer logo painted on them.

Many of the stats are speculative and based on the assumption that comments narrating past events or off-screen activity are true. Also, based on Captain Hammer’s reaction to feeling pain, it would seem that he’s at least tough enough to shrug off small arms fire without pain.

Source of Character: Dr. Horrible’s Singalong Blog, Captain Hammer’s Be Like Me comic.

Completed this 10th day of September, 2010 by the Gregorian reckoning. 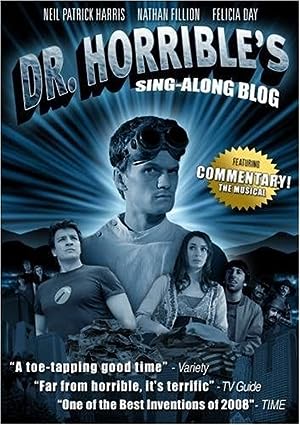 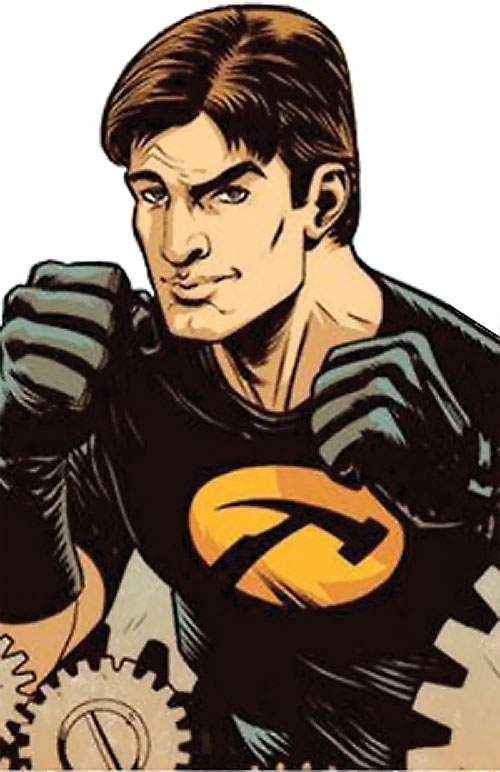 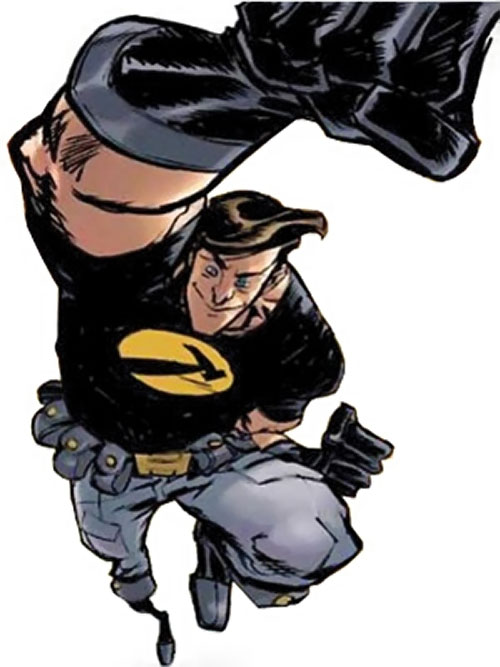 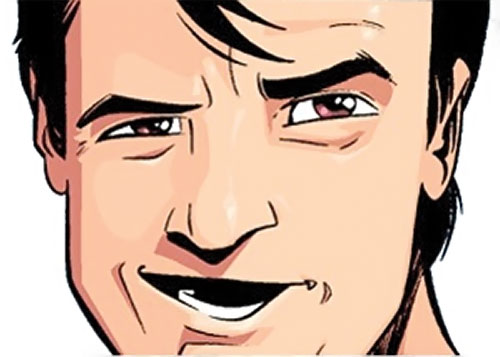 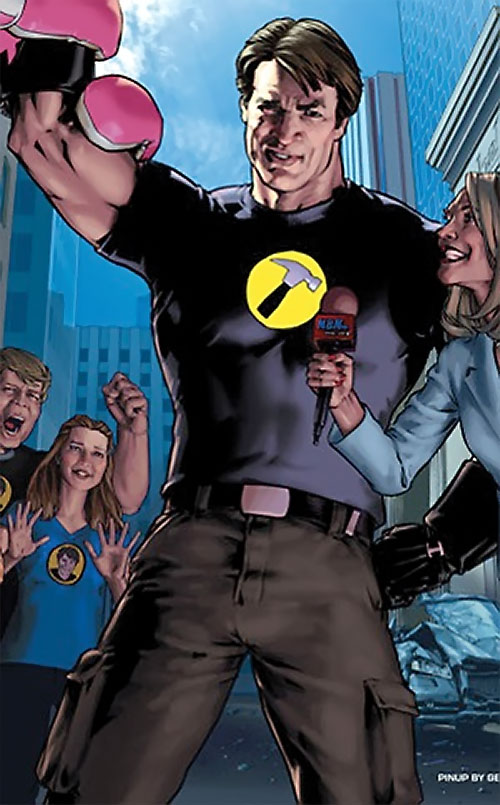 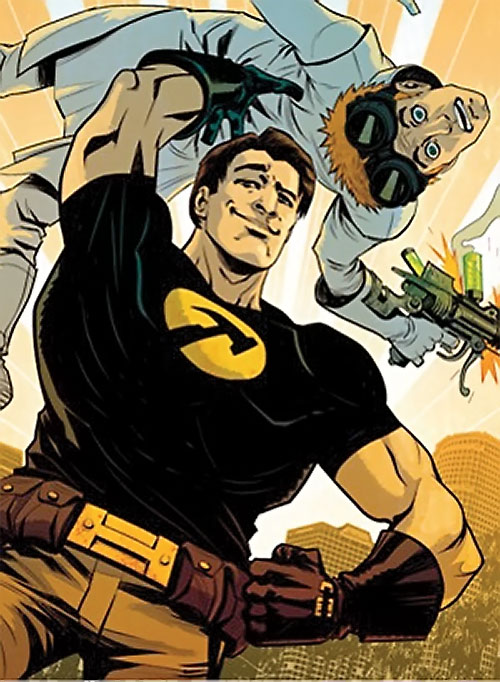 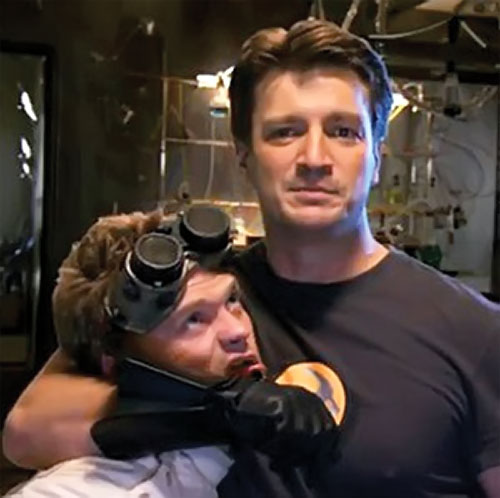 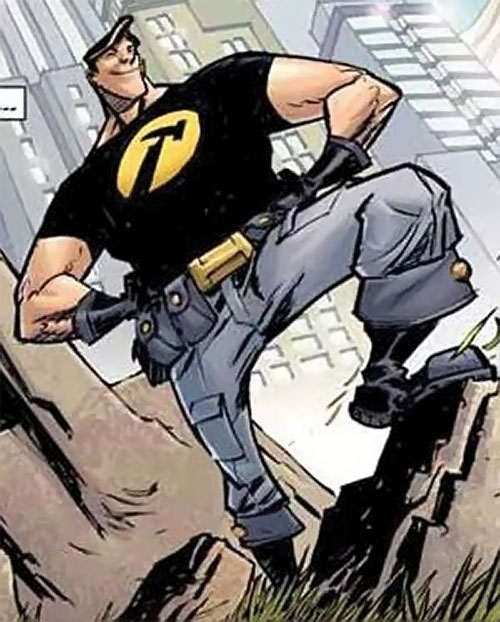