Captain Ironfist was competent at being a ruthlessly piratical menace. He thus knew his way about ships, weapons, and leadership.

Stanley Finchcomb was born during the 1910s. As he grew up, he realised that his father was hiding a secret – and was easily angered by mentioning pirates. Eventually, his father admitted that they were descended from a long succession of bloodthirsty pirates, with the worst having been Captain Ironfist.

Mr. Finchborn feared that heredity would have his descendants become pirates too. Seeing that the boy was deeply impressed by this, Mr. Finchborn attempted to get rid of the collection of piratical relics hidden in the attic. But the enormous portrait of Captain Ironfist fell atop him, fatally wounding him.

As a wealthy youth, Stanley developed the Pleasure Island amusement park – a decidedly un-piratical pursuit. It looked a bit like Coney Island, thought the name likely was a subconscious allusion to the Treasure Island classic novel .

One day, the ghost of Captain Ironfist emerged from the portrait. It convinced/intimidated Stanley into dressing up like him, then started possessing him into becoming a modern-day pirate.

Is this the real life, is this just fantasy ?

Though the story is ambiguous, it leans toward Stanley having been delusional. Thus, the ghosts are but figments of his imagination, as the saying goes. This is helped by 1930s American notions of heredity, eugenics and genetic predisposition.

There’s no genuine argument in favour of supernatural involvement in this specific story. Stanley’s father death is an odd coincidence, but by the standards of a 1940s comic book story it’s tame.

Caught in a landslide…

Now “possessed”, Stanley — as the new Captain Ironfist — recruited thugs, whom he paid to act as old-time pirates. He somehow had the Pleasure Island transport boat refitted to be able to transform into an Age of Sail pirate ship. This ship was called the Merry Anne, after the historical Ironfist’s.

Ironfist and crew plundered several ships. After raiding the Jacksonian, the bloodthirsty cap’n insisted upon sinking their prey with cannon fire.

As Ironfist was alternating between Stanley’s meek behaviour and the “ghost’”s ferocity, there was an attempt at mutiny. However, the “ghost” convinced Stanley to gun down the ringleaders, squashing the rebellion.

… no escape from reality

Stanley was deserted by his “ghost”, who was afraid of Superman. Back to his much meeker self, Stanley fled in a panic. But he then had a vision of his father threatening him for having given in to his piratical heritage.

Startled by this second “ghost”, Stanley fell to his death from the rigging.

Stanley would disguise himself into a convincing likeness of his ancestor, including a fake moustache.

He also kept his gloved hand clenched into a fist. It seems that this was to imitate a misshapen hand of his ancestor’s, but it’s unclear.

Ironfist is a brutal killer who talks like a comic book pirate, arrr.

Stanley is a meek upper-class lad, with a vivid imagination.

“Blast my soul if’n I ain’t got me a mess o’ pantywaists fer a crew. Very well, me fine buckos — I’ll do me own dirty work !”

These are lowballed stats, being as usual based on what we actually see him doing. His actual stats may be higher.

Had he faced a 1940s mystery man instead of Superman, I suspect Ironfist would have been able to fight a duel. Which requires higher scores than the ones above. 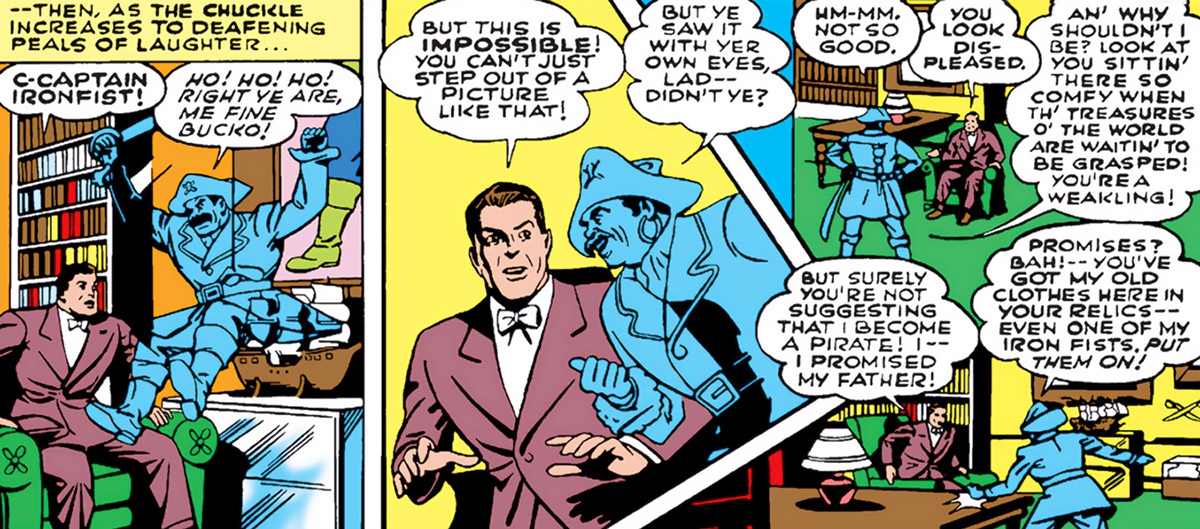 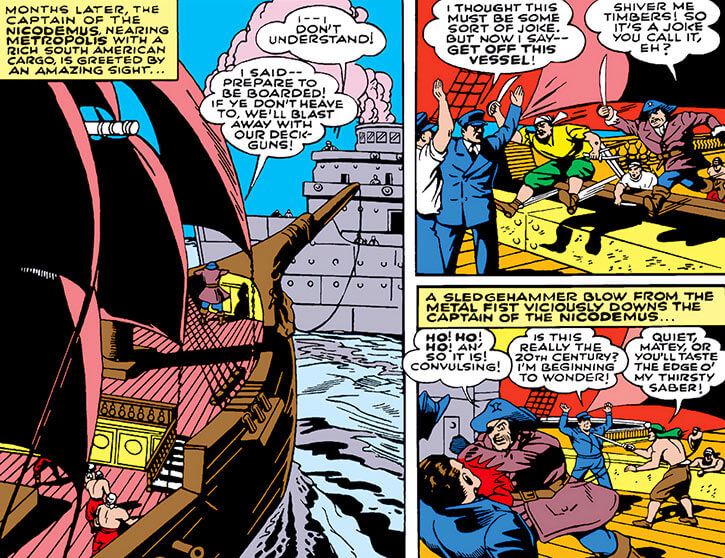