Captain Marvel can absorb and channel cosmic energy stored in specialized enclaves within his cells. His Kree Nega-Bands convert this psionic  energy into increased strength, allowing him to lift up to 50 tons under optimal conditions.

Genis possesses Cosmic Awareness, which allows him to sense danger on a universal level. As a result, he can:

He is able to bestow some of his powers (his cosmic awareness, flight, strength, and energy blast) on another being, and can remove them when he feels like it.

After the death of the original Captain Marvel, his love, Elysius, used Titanian science and a sample of Mar-Vell’s genetic structure to conceive a child. To protect him from his father’s enemies, Genis was aged to maturity through artificial means and sequestered on an isolated world.

On discovering his true lineage, Genis donned Nega-Bands similar to those worn by his father. He then set out to live up to his fathers reputation as Legacy. He later fully took on his role as Captain Marvel, when Photon (Monica Rambeau), then named Captain Marvel, passed the title on to him after he fought alongside the Avengers.

At the end of the Destiny War, Genis found himself unwillingly merged with Rick Jones. This process that triggered his latent Cosmic Awareness. They adventured for a while fighting such menaces as Wendigo, the Super Skrull, Blastaar and Burstaar, Magus, and Fredd – his evil twin clone future self from an alternate dimension.

During his adventures he travelled to an alternate dimension where he met his father, which allowed him to come to terms with the Captain Marvel legacy.

While trying to get a better handle on his cosmic awareness, Genis suffered a nervous breakdown. After spending days in a catatonic state, he tried to learn some discipline by studying with the Punisher, then joining the Kree military.

During this period he initially ignored Rick, who was becoming disturbed by Genis’ increasingly unstable and psychotic behaviour. He killed with little prompting and no remorse, and continually referred to himself as both insane and a god.

This behaviour culminated with him committing suicide. He was resurrected by Entropy, who had caused his breakdown. Entropy sought Genis’ help in killing his father, Eternity. After they did this, destroying the universe, the only beings left were Genis, Rick, Entropy and his sister Epiphany. 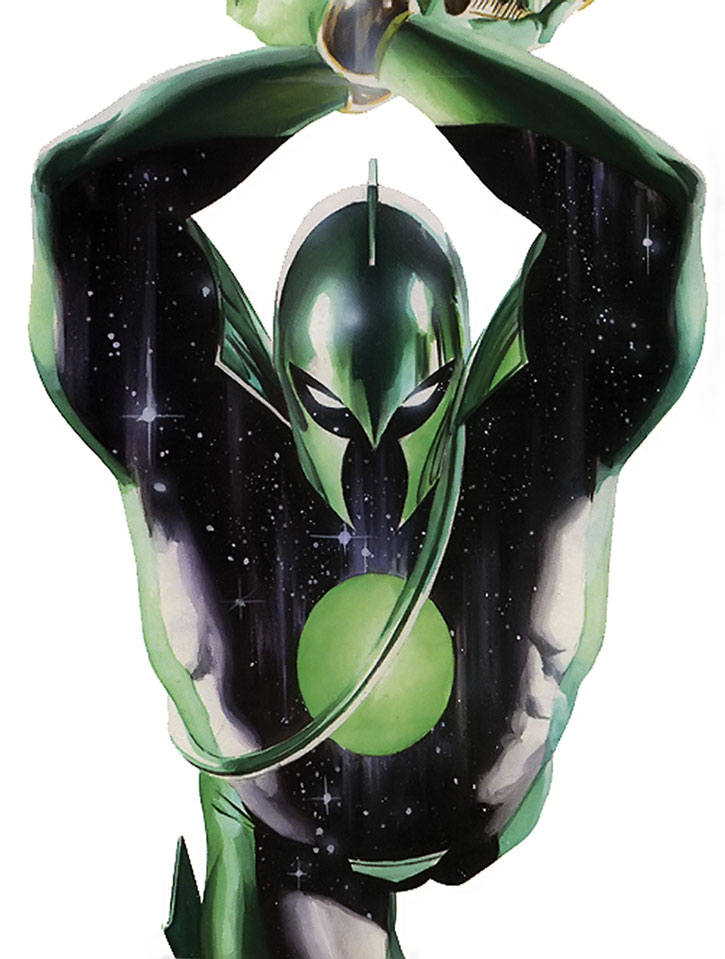 Feeling lost now that he had accomplished his goal of killing his father, Entropy decided to take his place as the new Eternity. Genis helped him recreate the universe, providing the Big Bang. As part of the creation of the new universe Genis subconsciously recreated a more idealized version of himself, whom he replaced when he returned to the universe.

As a result of this change he now has a younger sister Phyla, whom he does and doesn’t remember. He also brought his mother back from the dead earlier than he would have otherwise, although he can’t remember this.

While he initially appeared to have regained his sanity, he immediately had an identical breakdown. His activity became increasingly irrational. This culminated in him threatening war against a council of the most powerful intergalactic empires, whom he had foreseen becoming a vast empire that would subjugate Earth.

This conflict was stopped by an intervention by the Titanian Eternals, including his mother and sister. He appeared to be returned to sanity, but this may have been him playing it closer to the vest.

Following this he embarked on a quest into the future where he encountered his future son, Ely, who turned out to be allied to the Magus. Realizing that a conflict between them would have casualties numbering in the billions, he made a decision to remove his son as before he could become a threat, which resulted in his son’s future self fading from existence.

While he no longer bases every decision on what he thinks his father would have done, he is still determined to live up to his father’s legacy. He is still unhappy about being merged with Rick, feeling that he’s had his life stolen from him, but has come to accept that there’s nothing they can do about it at present.

Initially, when he was still fairly new at heroics, he still made stupid mistakes. He could easily get distracted.

During his “disturbed” phase he presented a eerily calm and intimidating manner… which occasionally broke down into pure rage. His activities seemed to be increasingly self-destructive, attacking increasingly more powerful opponents in the hope that someone would end his existence.

Following his journey into the future he is haunted by the knowledge of what he will do to his son.

Elysius was a native of New Genesis who had met and fallen in love with Superman. Upon his death she acquired some of his DNA and “grew” a son. When he learned of his father, he decided to adopt the name Legacy, took up copies of the Kryptonian Nega-Bands, and became involved in the Reign of the Supermen.

He later changed his name to Captain Marvel, but since he spent most of his time in space he never had any contact with the other Captain Marvel, or any confusion over the name. How that will change now he’s based on Earth is unknown.

During his “insane” period he has the Serious Psychological Instability drawback, and the gun he used with his Kree uniform was purely cosmetic, firing the energy blast from his Nega-Bands.

Uses the Acuity powers available in the list rules file.

There are a number of powers that he has only been shown using once (Power Reserve (Strength), Animate Dead, Ice Production, Flame Project and Disintegration). I’ve used Omni-Power for these. 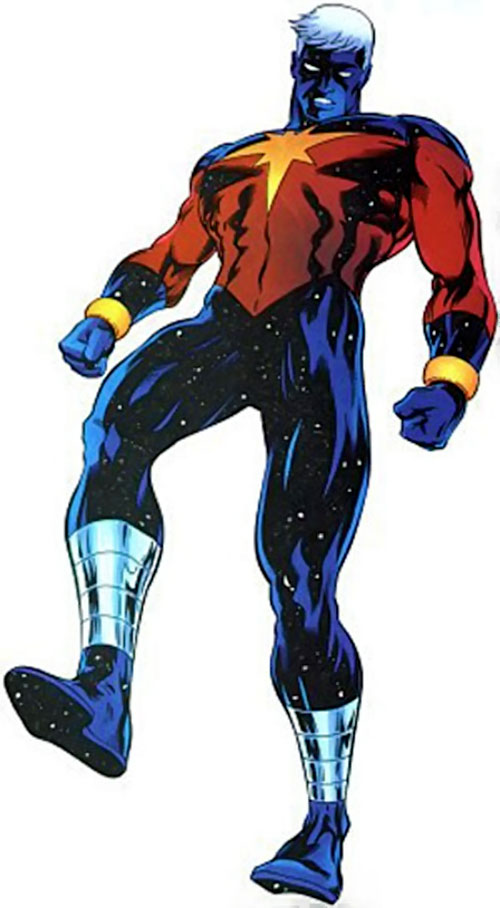 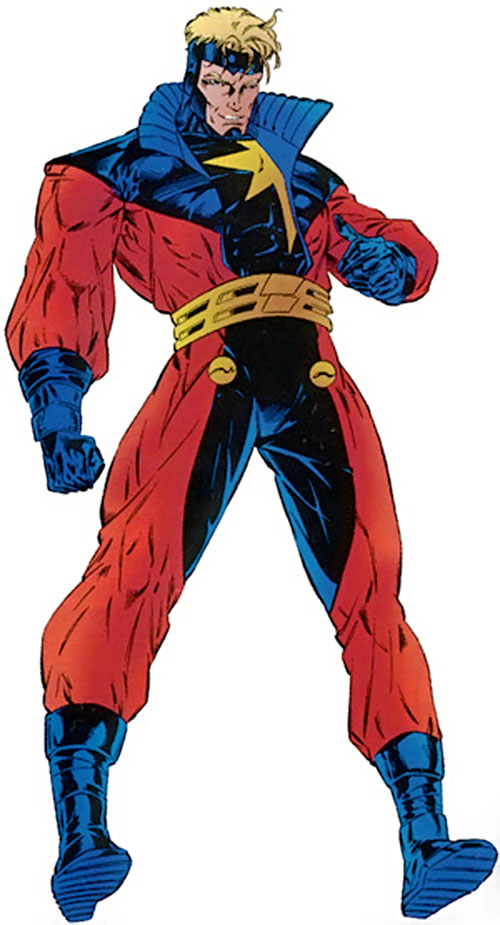 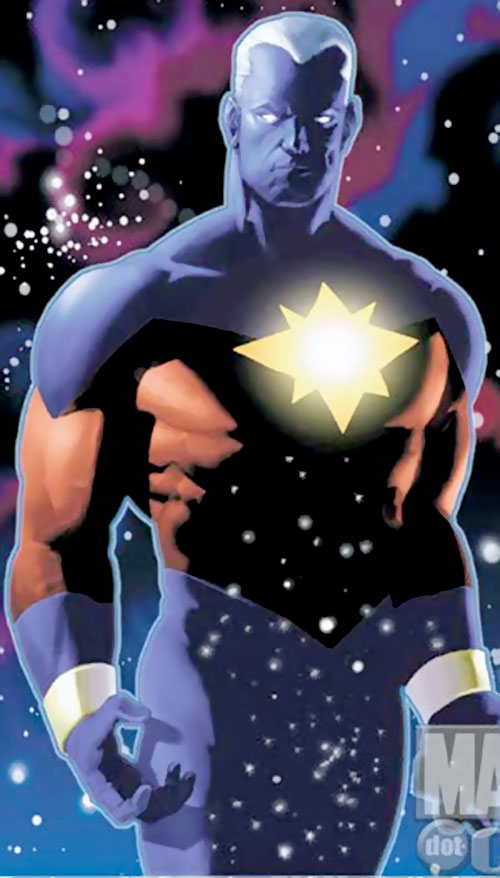 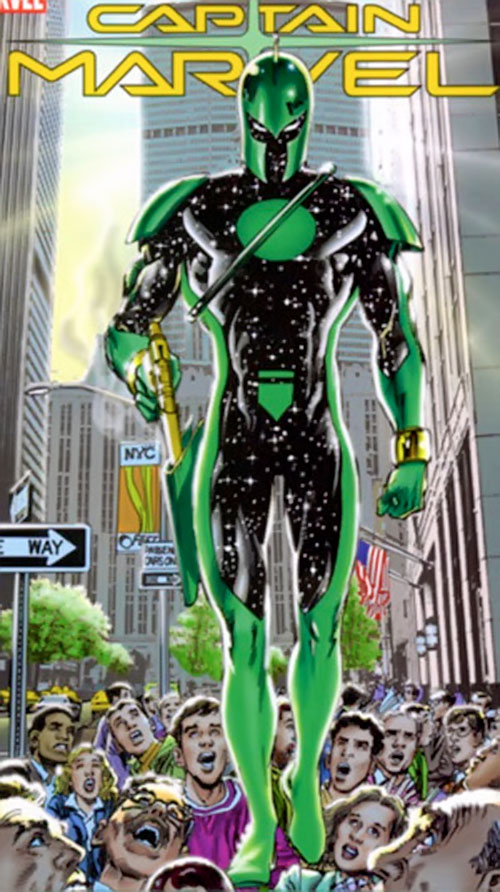 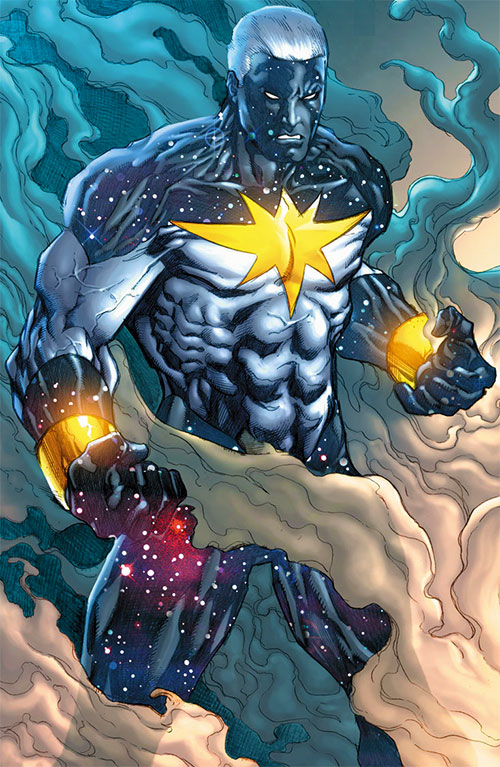