I never saw this 1941 television serial until a few days ago as of the time I started writing this. My introduction to live action Captain Marvel [I guess I don’t have to say “Shazam” here] was Jackson Bostwick, who I think fit the role perfectly.

But I appreciate the “Golden Age” take I had never seen before. In reading background, it was generally considered to be the best movie serial ever made except for the Flash Gordon serials. The sequences of Cap in flight were amazing considering the era and the budget.

The main hero is surprisingly willing to kill (often when it’s not really even necessary) but this was a different time period when super heroes had not yet built up the cultural expectations we have of them today.

It was the first screen appearance of a comic book character (not counting comic strips but actual comic books), a few months ahead of the Max Fleischer Superman cartoons making it the first super hero on-screen, period, animated or live action.

One thing that surprised me is how low-powered this version of Cap though I suppose his power is quite high since there is no super-powered competition.

This version of Captain Marvel seems very low-powered by today’s standards. He never had to go up against super-powered opponents.

He seems capable of lifting about a ton and a half under normal conditions and shrugging off both handgun and rifle bullets. Enough electricity to kill a normal human knocks him out as he is more durable against concussive force.

He flies at a speed that seems to vary from 30 to 60 miles per hour.

He seems as courageous as Billy as he is as Cap. He is stated to also have the Wisdom of Solomon though it seems to likewise apply just as much when he is Billy.

Adventures of Captain Marvel was a 12-part movie serial. There is no background material on the characters. We may assume that Billy is some sort of a reporter or journalist, perhaps even a radio announcer. 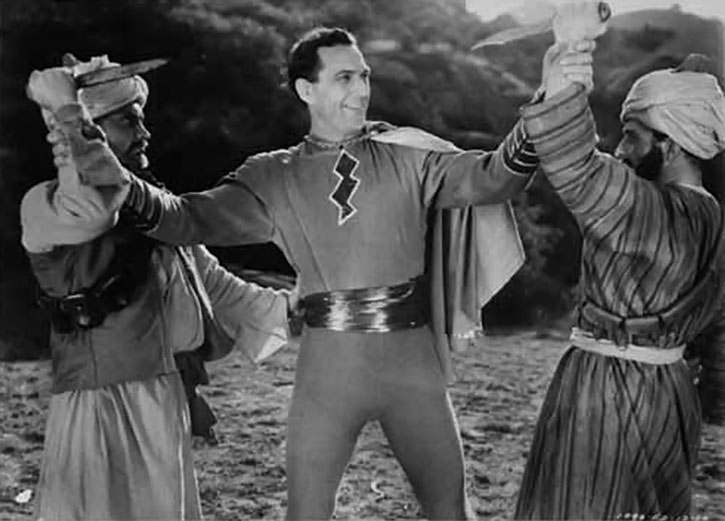 We never see him at his job or get a specific reason why he is there. There are no subplots showing the “real lives” of the characters. We see only the actions in an adventure/cliffhanger story. This is neither a criticism nor praise, just the reality of the Cliffhanger/Serial style of storytelling of the day.

We are told that the story begins in a remote section of Siam, near the Burmese border. It is a desolate, volcanic land called the Valley of Tombs. We are told in the opening credits that this land has been unconquered for centuries but to it comes the Malcolm Expedition, seeking a lost treasure of “the Scorpion Dynasty”.

Except for Billy, Whitey and Tal Chatali, the male characters seem (to me) generic and interchangeable. Betty is the feisty female lead but no love interest is ever expressed. That would be a yuck factor for the primarily young boy audience. 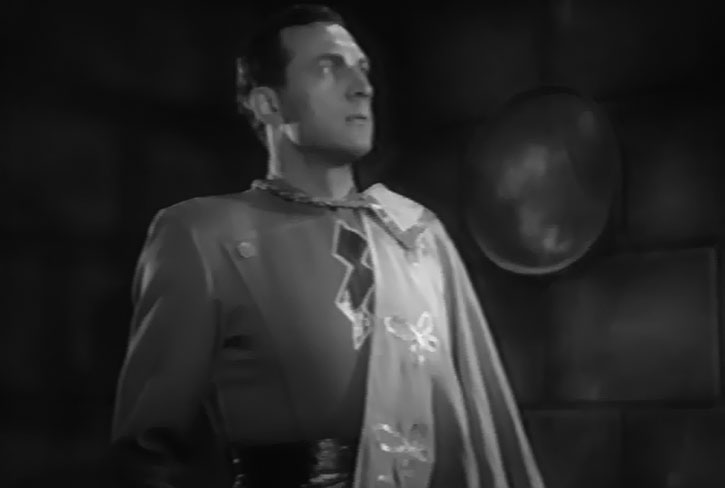 At their base camp, the expedition is attacked by natives because their mythology reads that their god, Scorpio, has decreed that no non-native shall set foot in the tomb.

They attack, but the native guide, Tal Chatali (again, no background, but best assumption is that this is his function), convinces them to cease. His argument is that their religion teaches that, if Scorpio is displeased, the nearby volcano will erupt – and it has not.

Things man was not meant to know

The expedition then heads into the caves. There, Chatali translates an inscription that basically says that what is buried there should remain there, forever a secret from mankind.

Billy says that he suddenly feels wrong about this, as if they are robbing a tomb. Chatali agrees and decides to wait outside. Billy agrees to gather some pottery but not help break into the actual tomb in the caves.

The others break into a chamber and see a statue of a huge scorpion made of gold. As they enter, they note that the scorpion contains a lens in each of its appendages.

Upon fiddling with a lens, it reflects sunlight from an opening in the ceiling high above and blows up a small portion of rock. When they adjust all of the lenses so that sunlight passes through them all, it causes an explosion that rocks the chamber and causes the stone door of the entrance to fall and seal them in.

Just as Billy hears the explosion and is about to go there, a part of the wall near him opens. An extremely old man in robes steps out. He explains that his name is Shazam and he has been here for thousands of years. He was not exactly alive, but more in what we would call suspended animation.

Shazam explains that Billy has been chosen because he decided not to pry into the secrets of the Scorpion. [Apparently, he was a better candidate than the native, Tal Chatali, who made the same choice]. 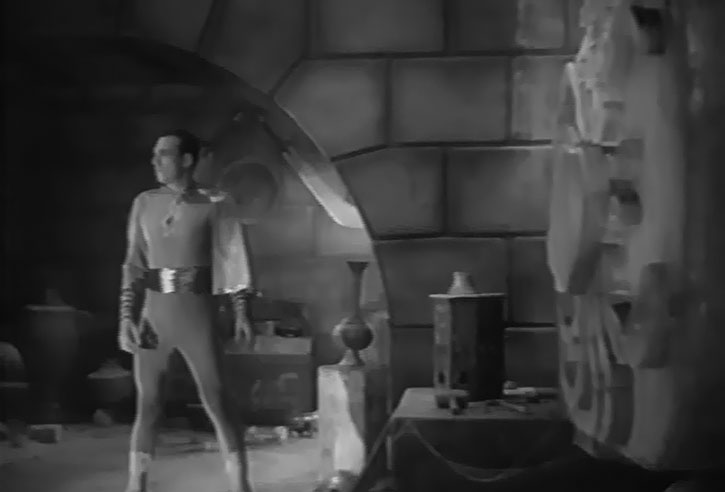 Shazam tells Billy that he will become Captain Marvel when he speaks the old man’s name. But he must only call upon the Wisdom of Solomon, the Strength of Hercules, the Stamina of Atlas, the Power of Zeus, the Great Courage of Achilles and the Speed of Mercury in the cause of right. To do otherwise will bring the Curse of the Scorpion down upon Billy himself.

Billy says “Shazam”. There is a sparkling explosion at his feet and he is surrounded by smoke. Within a second, the smoke drifts away to reveal Captain Marvel. At the same time, Shazam vanishes, never to be seen again.

Amazed at the change of form and clothing, Captain Marvel lifts the door aside. Seeing the small opening, he says “Shazam” and Billy climbs into the chamber. He finds that everyone was alive, just shaken up.

They move the Scorpion statue outside. Chatali reads a scroll they found with it. It that claims that, when the lenses are aligned and light shines through them onto base metals, the metals will become gold.

The men debate the advantages and dangers of this discovery. Malcolm decides to have one man each take possession of the five lenses. Bentley, Carlyle, Lang, Fisher and Malcolm are each given a lens. Billy is entrusted with the scroll on the grounds that he’s the only one of them (besides Whitey and Betty) who cannot translate it.

That night, in the camp, the mysterious masked figure calling himself the Scorpion appears. He lights a signal fire for the natives to attack the camp. He has apparently had contact with them before while in this mask and costume and has convinced them he is their god, Scorpio. 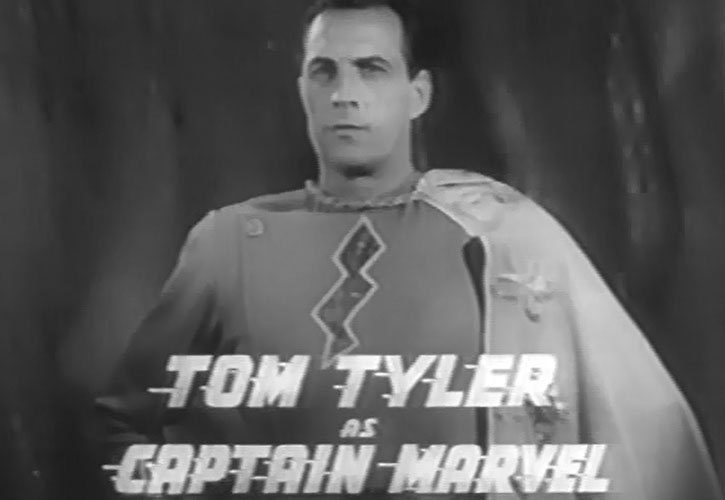 As the raiders attempt to get the lenses, they invade the tent shared by Billy and a man named Howell. The sleeping Billy is knocked out with a gun-butt, then tied and gagged. When Howell walks in, he is stabbed and killed by the Scorpion.

Billy awakens and manages to awaken the others just before the natives attack in force. Meanwhile, British troops show up to fight them. While escaping across a bridge in a car, Whitey and Betty seem doomed when an explosion causes the bridge to collapse.

There ended Chapter One. Chapter Two picked up with Captain Marvel’s rescue of the duo. The Expedition returned to the United States. And so went the remaining chapters.

Going over that cliffhanger

Each episode would begin with a daring survival of the cliffhanger from the previous episode. Most episodes revolved around the suspicion about which of the Expedition was really the Scorpion as the masked villain attempted to kill off all of the others and get their lenses.

There would be a chase, Billy would likely get another concussion from being knocked out yet again. Cap would then appear long enough to deal with the situation.

Each episode would end with a character, usually Billy or Betty, in danger. The next episode would show how they survived, often backtracking and showing several events that were not shown in the previous chapter.

Say, a character was still tied in the car when it was going 50 mph and only ten yards from the cliff. Now it shows that they started getting untied when still a thousand yards away. They rolled out of the car before it went over the cliff, miraculously not going 50 mph anymore even though the car is.

It was finally revealed that one of the men had secretly left his lens in the tomb in Siam. Thus, the few remaining survivors of the Expedition returned there.

The identity of the Scorpion was exposed. I will refrain from saying who because one can purchase the serial on Amazon.com or watch it on YouTube. His lies exposed, he was killed by his own men and the remainder of the Expedition destroyed the lenses and the statue.

As soon as the statue was destroyed, a mysterious voice sounding a lot like Shazam spoke the word “Shazam”. Captain Marvel vanished for the last time since his job as protector of the Scorpion Dynasty was over. Billy and the others returned to the United States.

Billy Batson is a short young man dressed in a safari outfit in Siam. He usually wears a suit and tie back home.

Captain Marvel is tall and strong. Though the movie is in black and white, one assumes he wears the traditional colors for his costume. 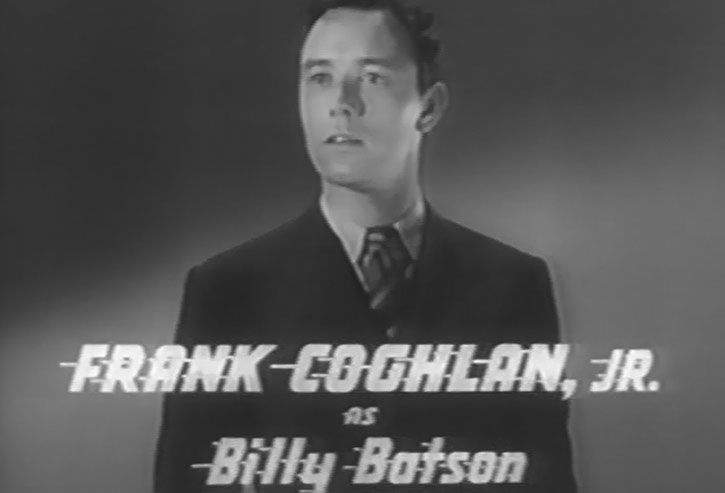 Billy and Cap have essentially the same personality. Billy is loyal to his friends but has no remorse at killing when needed or sometimes even when not needed.

For instance, as Cap, he throws a man that has no chance against him off a rooftop. In fairness, the man had just tried to kill Betty, who was allegedly not his love interest. 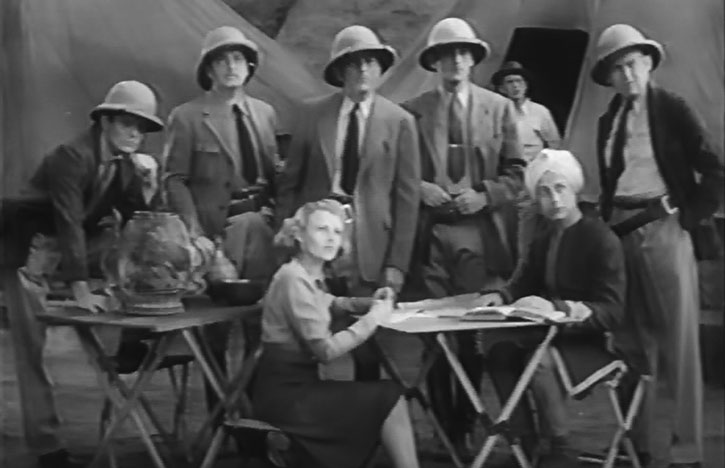 Criminal: “Don’t hurt me.”
Captain Marvel: “Then tell me where Betty is.”

Tal Chatali: “Billy Batson is the wisest one among us.”

This version of Cap would be very low power level in the DCU. Besides, the story ends with him no longer having the powers. We all know what he would be (in many rewritten histories) in the DCU.

Invulnerability was a judgment call. It was either that or Regeneration. He takes damage from things like high jolts of electricity, a charge that was shown previously to kill normal humans. It knocks him out but he fully recovers in a minute or so.

Meanwhile, handgun bullets bounce off every time. So I went with some Invulnerability and a bit of Skin Armor for a bit more defense against concussive force.

BODY and Invulnerability was based on consulting the chart and finding numbers where a normal man (BODY 04 or less) would be killed but BODY of 5+ and Skin Armor 2 would shrug off the impact and BODY of 5 would survive where Body 4 would not against the same jolt of electricity plus enough Invulnerability to jump back to full BODY.

Flight speed is a judgment again. It is either a 04 or a 05 and could be argued either way, probably closer to a 05.

Age of Billy and apparent age of Cap are based on the ages of the actors at the time. Cap’s height was the actor’s height. Weights were estimated as was Billy’s height.

Let’s face it. Most comic characters come out to magnitudes higher points than the listed starting points for original Player-Characters. It is interesting that this one could be done as a starting character on the standard points scale.

Writeup completed on the 7th of November, 2013. 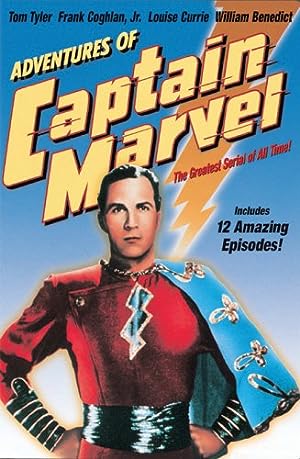 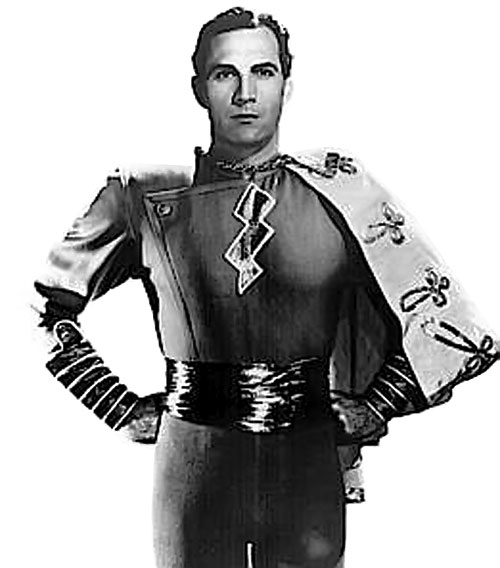 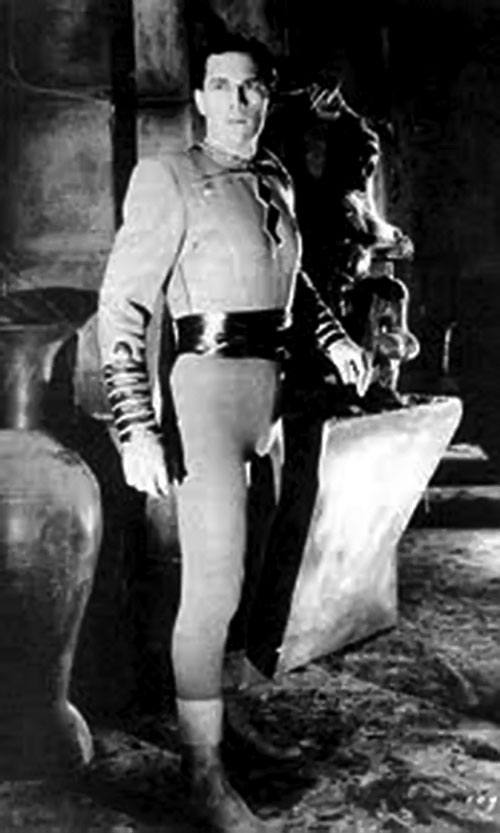 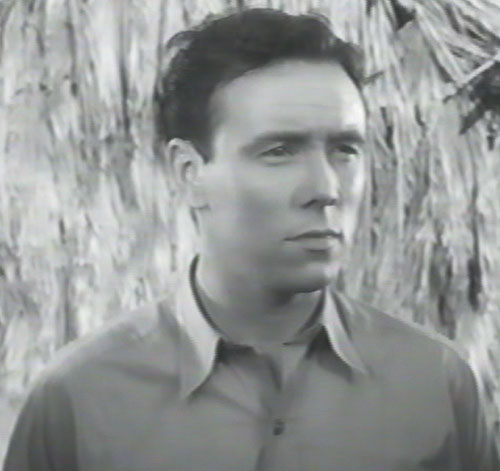 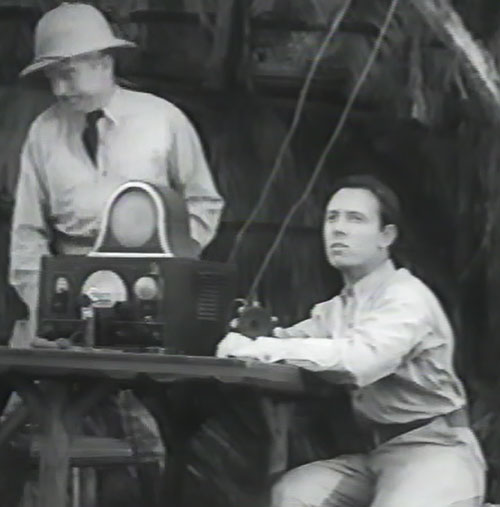 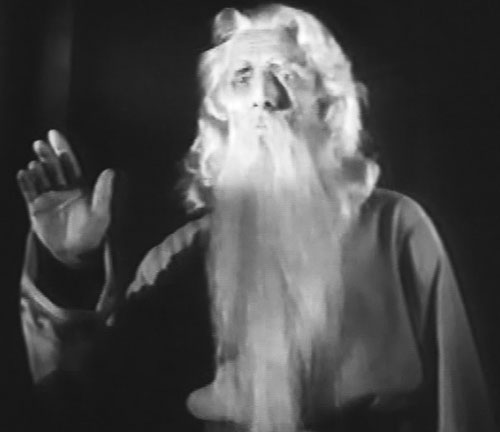 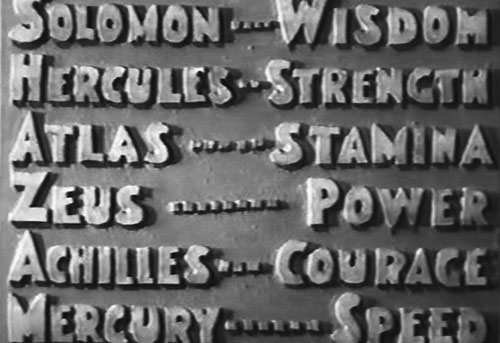