Vehl has undergone cybersurgery which allows him to masquerade as a human. His native Kree form is vaguely reptilian, green skinned, approximately humanoid. He can be changed against his will in to his original form by specific Kree technology. Vehl has unspecified combat training, and sufficient physics knowledge to pass as a top human scientist.

Vehl has an implanted device, which looks like a wristwatch when in human guise. It allows him to summon up, or partially use, his battle armour. He can, for example, just summon up contact lenses which allow him to see through invisibility shields. This suit has flight capabilities, invisibility shields, and an onboard totalkannon.

For millennia an ancient extraterrestrial race called the Kree have tracked and studied a mysterious planet-eating creature they called Gah Lak Tus. The Supreme Intelligence restricted knowledge of this entity to specially trained high-level Kree. They feared that if its true nature became common knowledge, it would drive their race insane.

Several years before Gah Lak Tus was due to arrive in the Sol system, the Kree staged a covert observation mission on Earth.

On the day the Asis 01 test article was to be launched, the base was attacked by a Kree killform with orders for Vehl to aid humanity no further. Refusing, Vehl slew the killform, but the effort left him powerless and he was captured by S.H.I.E.L.D..

Vehl defected, and after questioning by General Nick Fury and Captain Carol Danvers, who had been security chief at the Asis project, he briefed them, the Fantastic Four, Iron Man and Thor regarding the existence of a Gah Lak Tus database aboard his ship.

Vehl discovered that his commanding officer, Yahn Rgg, had indeed been driven insane by the knowledge of Gah Lak Tus. Rgg was preventing space travel from Earth because he desired to witness the complete elimination of a planet by Gah Lak Tus.

Vehl transferred the database in to Iron Man’s computers. The team escaped the spacecraft moments before a self-destruct sequence destroyed the ship, killing Yahn Rgg.

Mahr Vell was moved to the Triskelion, where he worked with Sam Wilson (Falcon), Reed Richards, and the Vision on preparing for the approach of Gah Lak Tus. He was initially treated as suspect, but has become more trusted over time, although Captain Carol Danvers still serves as his security detail.

He took part in the defence of Earth when Gah Lak Tus finally arrived. Vell physically battled its silver servants, as well as taking part in the scientific plans to drive him off. Their efforts succeeded, and Gah Lak Tus was driven off.

While he was reluctant to defect, he was disgusted by Yahn Rgg’s action against Earth. Mahr Vell felt that it was contrary to the Kree way of doing things, and that he had to do what he believed to be right.

Flippant even in the most serious of situation, Vehl is a trained soldier. He has no hesitation jumping into trouble when he feels it’s necessary.

He isn’t happy that everyone, other than Sam Wilson, corrupts his name into Marvel, but he has gotten used to it. He enjoys flirting with and otherwise irritating Captain Carol Danvers.

“Tell Yahn Rgg he’s a rectal wart and I’ll kill him for this.”

Nick Fury: “You’re not a shapechanger ?”
Mahr Vell: “Nope. I am the space alien that got an extreme makeover. If I married my cousin and videotaped my mating rituals, I could get my own reality TV show.”

Carol Danvers: “And what do you want ?”
Mahr Vell: “Me ? Columbian coffee. Krispy kreme donuts. New episodes of Lost . Seeing the Walko Yamato Drummers  live. I like it here. I like the culture. I even like you monkey people. I got myself on to the Asis project to speed it up. You deserve the stars. You deserve to live.”

Mahr Vell: “You people have fun without me now. I’ve enjoyed this lesson in hu-man stupidity and stubbornness. And Sam, I’ve got to ask – you argue with Nick Fury but don’t say boo to Captain America ? What’s up with that ?”
Falcon: “‘What’s up with that ?’ You learned English from watching Seinfeld, didn’t you ?”
Mahr Vell: “You are correct, sir. Oh, and talk shows. How does Conan O’Brien get his hair to go like that ?”
Falcon: “It’s a hu-man secret.”

Mahr Vell arrived on Earth long after the super beings there had settled into the post- wide awake era. The JL was disbanded during the year with out a Superman, Batman and Wonder Woman.

Mahr Vell joined the only forces he felt had a chance of halting Gah Lak Tus, the combined shield forces of the X-men, Ultimates and Fantastic Four. He was active repelling the invasion of along side Iron Man and Ray.

The three stood against the silver heralds of Gah Lak Tus who tried to stop the efforts of the Reed Richards, Lex Luthor, and Noah “Calculator” Kuttler to use a cosmic event to stop their master. In the end the Earth was saved but Mahr Vell was catapulted half way across the country to Chicago was and injured badly.

Because of the chaos of the aftermath and the high energy weapons being used Mahr Vell couldn’t be tracked and was presumed dead.

Mahr Vell felt this was an opportunity to escape back into obscurity. He established a new identity but was not fated to live a quiet life. In the first month after he was reasonably healed he was catapulted back into action.

The high-rise office building he had taken a programmers job in was slammed into by the Martian Manhunter in the midst of a massive battle with government agents endowed with Martian powers. The building fell like a toppled tree.

Mahr Vell, although powerful, was not powerful enough to save the thousands working in the high-rise. He and the Manhunter were aware of each other. The communicated telepathically at high speed. Both were heroes at their core and knew that there was only one way to prevent a massive loss of life. They switched problems.

The Martian-human hybrids who were a match for the more powerful Justice Leaguer were driven back by Mahr Vell’s unexpected energy attacks. Meanwhile Jonn slowed the dropping of the building to the point where the inhabitants could escape largely unharmed. The two aliens bonded over their similar problems and decided to join forces.

Fury and Steel became aware of Mahr Vell after the battle and sent an Ultimate’s Squad to “escort” him back to the Triskalion. A dozen Giant Men, Tony Stark, and a small army of S.H.I.E.L.D. troops confronted the two aliens and Ray.

Fury refused to cede to the JL’s autonomy as the league had been disbanded. Starman, the long standing arbiter of the peace, had perished only weeks before. Steel ordered a psi-core assault on Martian Manhunter. He beat all of them.

At the same time, Iron Man had grown uneasy with the domestic use of S.H.I.E.L.D.. Ray and Tony Stark did not wanting to destroy Chicago with a clash of titans and over Fury’s objections brokered a peace. During the chaos Mahr Vell disappeared. Only Jonn Jones knows where he went.

The current whereabouts of Captain Mahr Vell are unknown.

Bonuses and Limitations:
Chameleon is Always On, and only allows him to take human form (-2).

Source of Character: Marvel Comics, Ultimate universe (up to the end of the Ultimate Galactus series). 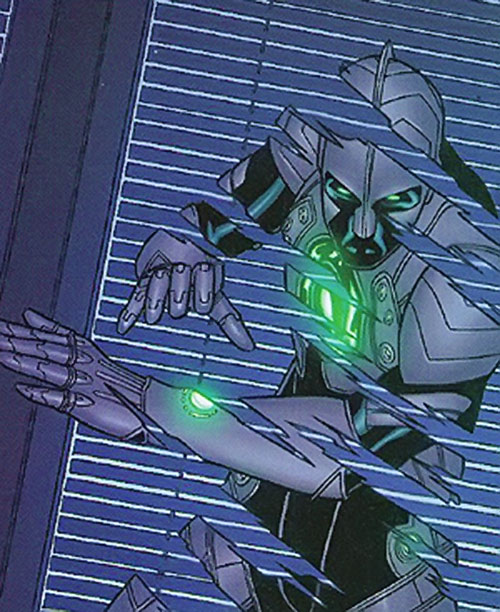 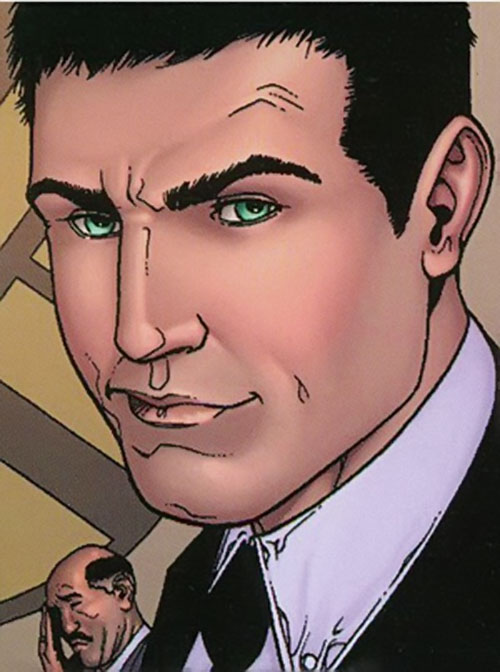 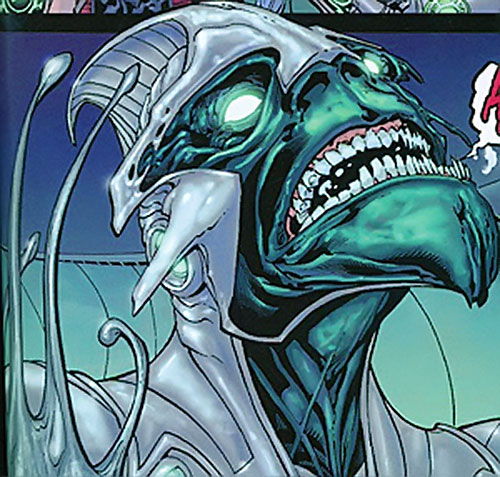 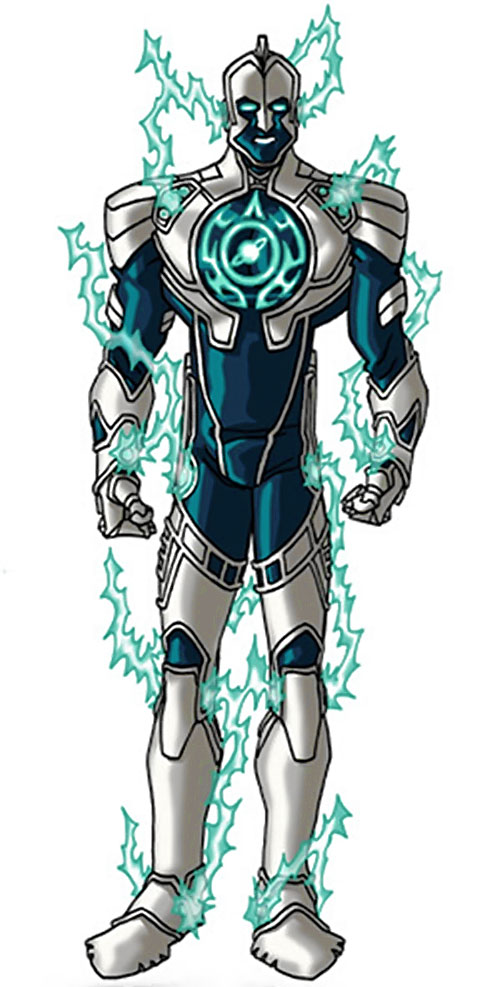