Gardner used his experience as a former Marine in his superheroic career.

Born in 1912, Nelson Gardner was a somewhat sickly child. As such he often found himself the butt of other children’s jokes. After graduating from college, he joined the United States Marine Corps, to prove his manhood and served admirably, eventually reaching the rank of Lieutenant.

After his honorable discharge, he became an independent security consultant and moved from Straw Valley, Michigan to New York. There he joined the ranks of costumed adventurers after reading of the exploits of his predecessors.

As Captain Metropolis, Gardner set out to prove the supremacy of strategy. He adopted military tactics, techniques, and organization into his war on crime. In 1939, he and Sally Jupiter (aka the Silk Spectre) became the founding members of the Minutemen.

Gardner apparently began his relationship with the Hooded Justice shorty after founding the Minutemen. In order to conceal it from the public, the Minutemen’s agent Laurence Schexnayder had Silk Spectre pose as Justice’s girlfriend.

With the advent of World War II, Gardner was recalled to active duty with the Marines. In spite of the length and apparent high quality of his service, he doesn’t appear to have received a promotion at any point. After the war, he and the other drafted members rejoined the Minutemen.

In 1948 he got into a fistfight with his fellow crimefighter Mothman when he made some racist remarks after a black cabbie splashed mud on his uniform. Once the police broke it up, the pair appear to have reconciled quickly.

In 1949, Captain Metropolis formally disbanded the Minutemen, but continued to work as a solo hero.

In 1954, during the HUAC hearings, the former Minutemen were called upon to reveal their secret identities to a representative. Gardner complied and passed.

At one point, in the 50’s or 60’s he went on record as making racist statements against Hispanic- and African-Americans, which only served to fan the flames of the public’s growing distaste toward superheroes.

In 1966 Gardner attempted to found another hero group, known as the Crimebusters, with the heroes currently active in New York. The group, however, didn’t make it past their first meeting. The Comedian pointed out how useless a superhero group was in a world that could be wiped out by nuclear weaponry at any time.

The others agreed that the days of groups like the Minutemen were over. They left, deaf to Metropolis’ despairing pleas.

(In the DC Heroes Who Watches the Watchmen module, Captain Metropolis attempted to force the group to come together after this meeting by secretly arranging to have their friends and loved ones (including his own mother) kidnapped, and then led the heroes in “investigating” the incidents.)

(If this is considered canon, all the victims were rescued, the Crimebusters *still* didn’t form, and Metropolis apparently got off scot-free.)

Gardner remained active longer than any of the other Minutemen, save The Comedian. While still active, he was decapitated in an auto accident in 1974.

However, there is an interesting theory, based off of a single panel within the comic, that the Hooded Justice and Captain Metropolis faked their deaths, so that they could live in anonymity. If that’s the case, then they probably both died in Ozymandias’ fake alien invasion. The theory is outlined here .

Nelson Gardner was a tall blond man in good shape, with chiseled features and a lantern jaw. He gained a considerable amount of weight in his later years, in spite of keeping a strict exercise regimen.

Captain Metropolis’ costume consists of a red jacket with a winged “M” emblem on the front, a red mask which leaves his mouth and the top of his head exposed, brown jodhpurs with red stripes on the sides and a brown belt, yellow gloves, dark brown boots, and a blue cape.

In spite of his successful military service and tenure as a superhero, Gardner was an extremely insecure and uncertain person. While with the Minutemen, he had the almost constant delusion that the other members of his group were snickering behind his back. He spent a great deal of effort trying to win their respect, even though he already got on well with all of them.

Due to his insecurity, Metropolis seems to have been quite uncomfortable when dealing with other people or the press. He tended to be timid, weak-willed, and ineffectual.

In spite of being a polite and fairly likable person, if rather reserved, Gardner was also extremely old-fashioned. He was conservative to the point of being hidebound. One of the reasons he wished to form the Crimebusters was to combat social ills such as “black unrest”, “promiscuity”, and “anti-war demonstrations”. He also made racist remarks.

Unlike with Hooded Justice, there doesn’t appear to have been any genuine malice behind this racism. He simply grew up in a far less tolerant time and place, and his racist attitudes underscored the fact that he was a pathetic, aging relic in a world that was changing too fast for him to handle.

It can probably be inferred, given his obsession with “proving his manhood” and his old-fashioned ways, that Gardner was ashamed of his homosexuality. Though he seems to have been wholly in love with Hooded Justice, he certainly wasn’t into the rough stuff his lover liked, and Justice apparently cheated on him quite a bit with younger men who were.

The two had a habit of bickering like an old married couple in public, which nearly blew their cover on several occasions. It’s uncertain how he reacted to the reacted to the disappearance of his lover in 1955, or to the death of Rolf Muller (if that is indeed who Justice was).

Comedian: “This whole ‘Crimebusters’ schtick, it stinks. What it *is*, Nelly, is that you’re gettin’ old and you want to go on playin’ ‘Cowboys and Indians’ !”
Captain Metropolis: “Th-that isn’t true…”

(As the Crimebusters meeting breaks up.)
“Please ! Don’t all *leave*… Somebody has to do it, don’t you see ? *Somebody* has to save the world…”

The early parts of Gardner’s life would probably be essentially the same. But rather than moving to New York, he chose to hang his shingle in Metropolis, becoming the city’s first superhero.

As in Watchmen he founded the Minutemen, who briefly disbanded in World War II. Those members who weren’t drafted or reinstated into the military joined the All-Star Squadron. Though the group re-formed after the war, things weren’t the same, and they broke up for good in 1949.

Gardner sailed through the HUAC hearings that had ended the JSA and continued his heroic activities into the 1960s. Due to the proliferation of costumed heroes in the DCU, he was able to find enough like-minded individuals to successfully form the Crimebusters in 1966.

Though the ultra-conservative group enjoyed a mild degree of popularity at first, the public turned on them after they used excessive force to break up a civil rights demonstration, and the group was forced to disband after only four years, in the face of widespread derision and government disapproval.

Captain Metropolis continued to serve as a superhero until his death.

Though he had no children, his nephew Guy Gardner, viewing him through the eyes of a child, idolized him as an example of a real man (as opposed to his abusive father). Guy sought to emulate his ideals of conservatism and manhood. To this day, Guy remains unaware of the insecurity that haunted his uncle, and even unwitting of his uncle’s sexual orientation.

While Guy Gardner was in space performing missions for the Guardians of Oa, Lex Luthor was able to take control of the rights to the name “Captain Metropolis”. He gave it to one of the members of his version of Infinity Inc., a teenager who had gained supersonic flight and super-strength from the Everyman Project.

Although Guy resented this at first, he found the kid to be quite brave and likable, eventually deeming him worthy of upholding his uncle’s legacy.

The new Captain Metropolis survived being de-powered by Luthor, but as yet has manifested no new powers, as some Everyman subjects have.

Although Captain Metropolis’ background calls certain subskills of Military Science and Detective into question, his focus on strategy makes it likely that he picked up said skills on his own initiative.

Source of Character: “Watchmen” Graphic Novel, the “Who Watches the Watchmen” module by Dan Greenburg, the “Watchmen Sourcebook” and “Taking out the Trash” module by Ray Winninger (from which I cribbed most of the History and stats, though I disagreed with a few.) 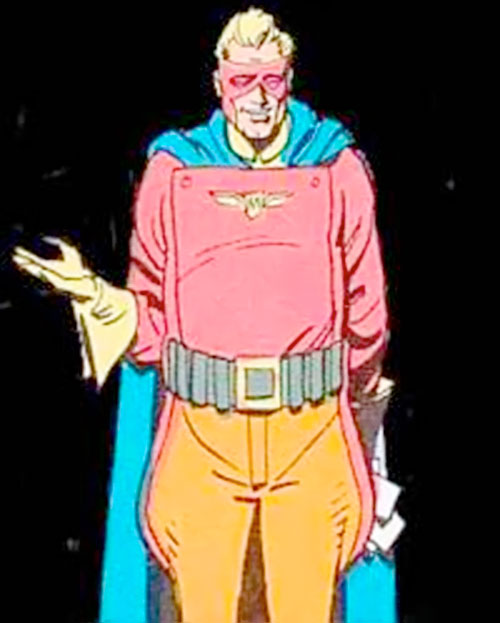 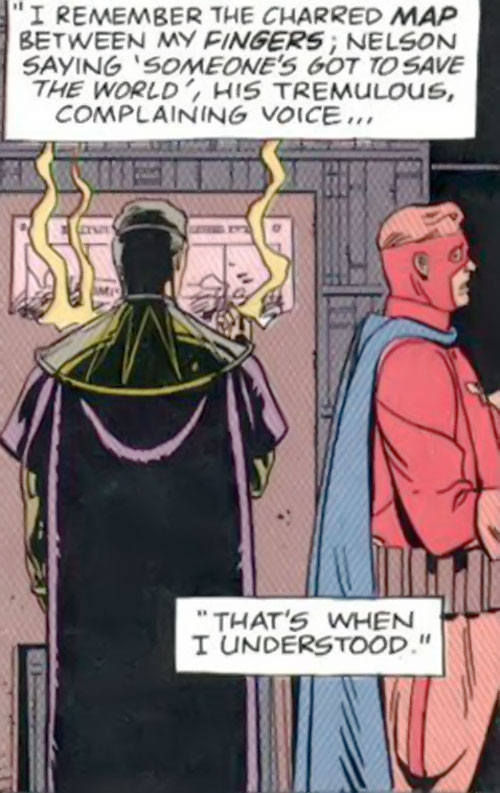 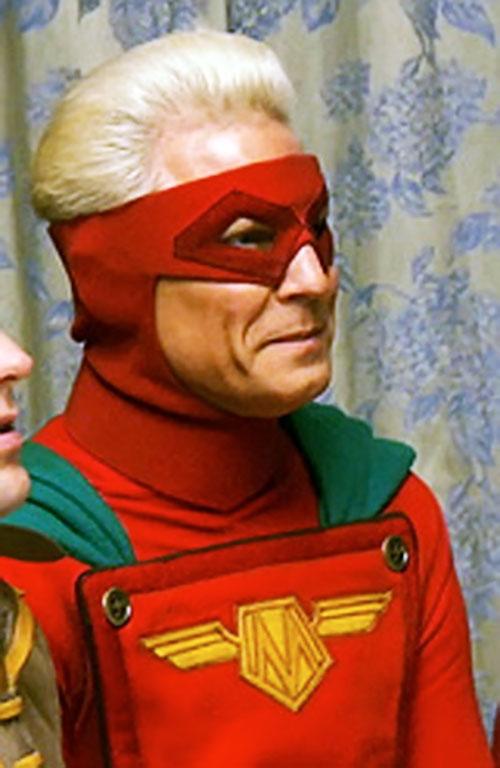