Of course, Blackhawk still has an 11, but Captain Marvel probably didn’t know about Blackhawk. 🙂

For the Nighthawk’s stats, I mostly copied Blackhawk’s plane’s stats.

His buddies consist of Chuck Ramsay, a kid who’s a decent pilot, mechanic, etc., Ichabod Mudd, a gangly awkward mechanic, and Joyce Ramsay, token female. These are the only members of the Secret Squadron that we know about, but if you get one of those Captain Midnight secret decoder rings, you too can be a member of his secret squadron and help him when need arises.

“On a thousand hidden flying fields, his deadly secret squadron waits the word to strike again for freedom ! Shiver, you enemies of America ! Shiver at the dread sign of the Doom Beam flaming in your secret lairs ! Shiver at the black shadow of wings across the midnight moon ! CAPTAIN MIDNIGHT IS BACK !”

(Radio show version of the character)
The ending gong of midnight… the roar of the airplane engine, at first in the distance… then stronger as it sounds in a dive… this was Captain Midnight !

The Captain Midnight radio series had its beginnings in 1938 on Chicago radio station, WGN. Created by Robert M. Burtt and Willfred G. Moore, the creators of The Air Adventures of Jimmie Allen, the series was sponsored by the Skelly Oil Company.

In the beginning, “Captain Midnight” was simply an undercover name for Jim “Red” Albright, who regularly piloted cargo and passengers. As an undercover agent, Albright was trying to gather information on a gang of criminals.

However, by the end of the first run, ending in a summer hiatus, the Captain Midnight persona was beginning to stick. Many knew him only by that name. Captain Midnight was constantly trying to stop the plans of the evil Ivan Shark and his daughter Fury. Shark remained as Midnight’s evil nemesis throughout the length of the radio run.

Captain Midnight was helped in his efforts by Chuck Ramsey and Patsy Donovan (later, Joyce Ryan) who were members of his Secret Squadron. In the national versions, there was also Ichabod Mudd, Midnight’s mechanic. There were a number of different actors playing the various roles over the long run.

The series grew in popularity and was broadcast over the Mutual Network beginning in 1940 sponsored by Ovaltine.

Captain Midnight was one of the early series to offer exciting premiums. Young listeners could also be a part of the Secret Squadron by signing up usually via the premiums and receiving decoder badges, etc. Despite the adult sponsor, Skelly advertised by telling the kids to get their dads to the gasoline stations to get the premiums and, of course, Skelly products.

Ovaltine continued the premiums via their foil tops.

Eventually, the series moved from radio to film and finally to television. Many know the character from the television run starring Richard Webb. If you have an opportunity to view some of the old television shows, note the actor playing Tut, the scientist for the Secret Squadron. This is the great radio actor Olan Soule (Mr. Firstnighter, One Man’s Family, and others).

In Captain Midnight #1, his costume consists of a red jumpsuit (with those pants with the weird bulges on the sides), blue belt, blue boots, blue gloves, and a blue aviator’s hood with goggles. His chest symbol is a winged clock whose hands are both at 12. The clock is white, the wings are yellow.

He wears at least two different costumes later on, as seen in Golden Age Greats #4, and another costume elsewhere (one which puts his chest symbol on his head) that I saw in an ad for Ovaltine.

Friendly guy who is very serious about fighting the enemies of America.

“Ovaltine— The heart of a hearty breakfast !”

Technically, this character has never appeared in the DCU AFAIK. I don’t know if he made a cameo in The Golden Age.

However, as a Fawcett character, one can easily stick him into the DCU. In which case he would be a member of the All-Star Squadron, but probably an inactive one. Note that he was involved with a long crossover with Spy Smasher. 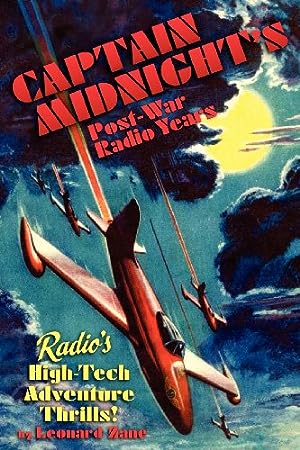 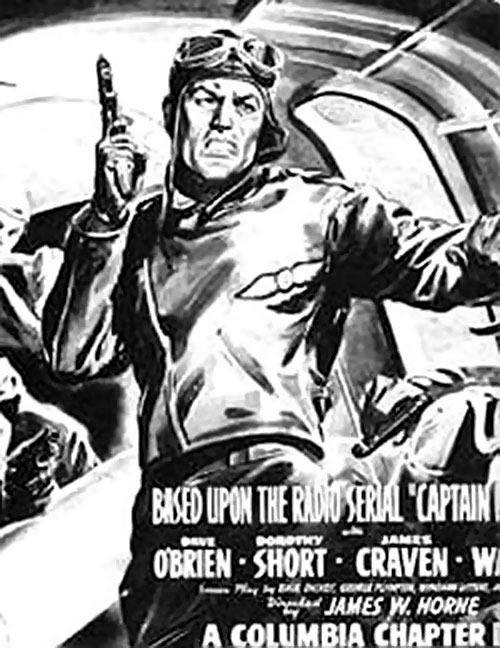