Captain Nazi is traditionally an enemy of Captain Marvel (Billy Batson). He appeared during the 1940s.

However, during the 1980s there was an obscure successor. Which we’ll cover here.

We suggest first checking our guide to Captain Nazi (and guys like him) for orientation. These characters make more sense if you read the profiles in chronological order.

Captain Nazi’s powers are not unlike those of Superman. He has super-strength, super-durability, flight, super-reflexes, heat vision.

The power level of these abilities is difficult to estimate from the stories, though.

Abernathy noted that his costume was able to withstand a raging fire and other forms of damage. But that’s nothing exceptional by super-hero standards. 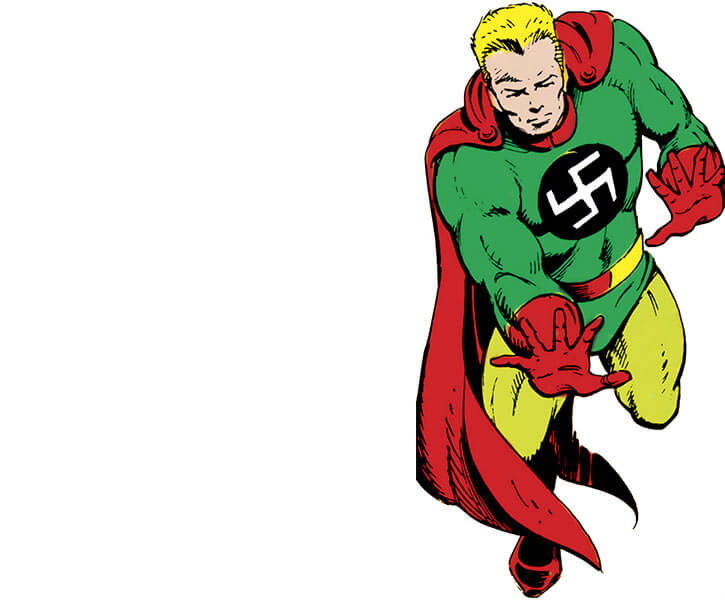 After Fawcett licensed the rights of Captain Marvel to DC Comics, there were several attempts to relaunch the character. But they had trouble finding their legs.

One such attempt was done right after the Crisis on Infinite Earths. The idea was to have Captain Marvel be a major character again, and a legend on DC’s “New Earth”.

This rebooted version, although interesting and handled by leading writers, also failed to bottle the magic lightning. After a limited series and a number of appearances in other books, the projected Shazam! series never was launched.

That those events probably were not in continuity was the dominant view.

However, Jerry Ordway  clarified this in a later interview. Mr. Ordway wrote the 1990s Captain Marvel relaunch – the one that finally stuck.

Why has he never be seen again ? Now that’s an *interesting* question. 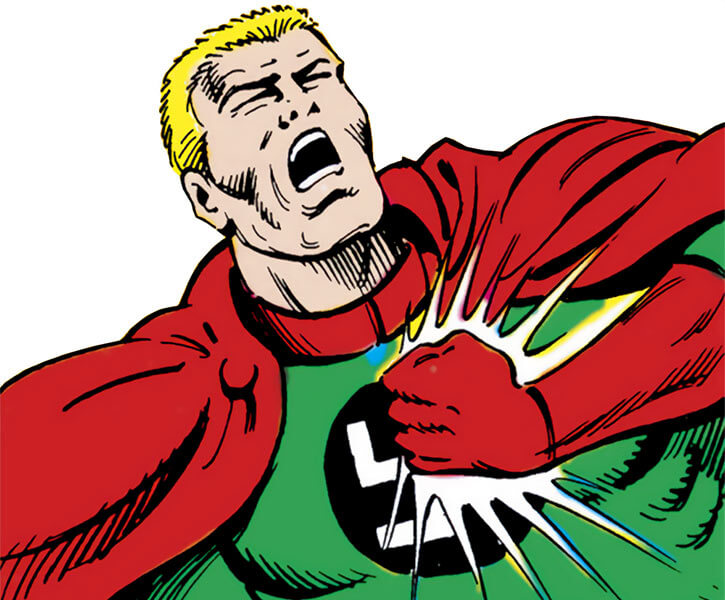 Lester Abernathy was a member of a paranoid, violent, rabidly racist neo-Nazi militia – the “Sons of Valhalla  ”.

Based outside of San Francisco, the militia was obsessed with the supposed influence of Jewish Americans and African-Americans over the US government and society. It made heavy use of pseudo-Norse and Nazi imagery.

The Sons operated a combat training camp, and a sort-of kind-of Christian church.

The head of the militia was addressed as Leader Davis. He had been running a secret project for years in collaboration with one Dr. Patterson.

Patterson had discovered a “Formula X” in Bavaria after the war. Perhaps he was a G.I. who stumbled upon Nazi research about a wartime Captain Nazi. The scientist laboured for decades to make the formula workable.

When the tests on rats proved conclusive, militiaman Lester Abernathy volunteered to be a human Guinea pig and receive an injection. He trained with Patterson to handle the projected effects of Formula X.

Leader Davis made a show of the injection in front of his militiamen. On his end, Patterson was nervous and worried that it might not work.

However, though it was painful, the injection was a complete success. Abernathy developed a suite of powers not unlike those of Superman.

He even physically mutated. The lad gained height and weight, acquiring a powerful physique within minutes à la Captain America (Steve Rogers). Even his face changed to become much more square-jawed and heroic.

Enthusiastic, Leader Davis launched his plan. His troops would poison a reservoir to create a panic in San Francisco. As to Abernathy (whom Patterson declared was now “Captain Nazi”), he was given a sensor device to detect Captain Marvel.

Marvel had recently debuted in San Francisco. Davis had already taken measures to prepare for a fight, sacrificing one of his men to scan Marvel and have Patterson build the sensor. 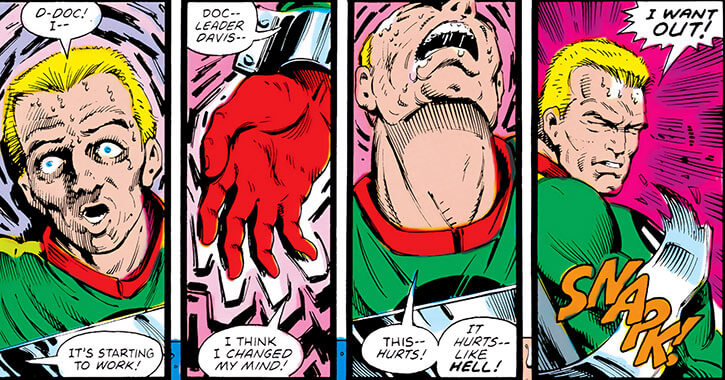 But Abernathy, drunk with power, proclaimed that he was no longer Lester – but Captain Nazi. And that Captain Nazi was a leader – not a follower.

The fratricide fray with his fellow Fascists took place near the explosives compound in Patterson’s lab. Thus, when a militiaman foolishly opened fire everything exploded. This likely killed Patterson and Davis.

Looking for the militiamen headed for the reservoir, Captain Nazi stumbled upon young Billy Batson.

The kid had been infiltrating the militia under a false name. But Captain Nazi didn’t know that Batson had been found out by the militiamen. Thus, he was surprised to find the youth bound and gagged within a burning gas station.

Nazi ripped off the gag around Batson’s mouth, unwittingly saving his live. Billy yelled “Shazam !” seconds before the station exploded.

Nazi stood unfazed in the blaze, grumbling about having lost his informer, but was suddenly faced by Captain Marvel. Albeit caught flat-footed, Nazi had time to get his hands around Marvel’s neck. But he was then punched extremely hard.

Before rushing off to stop those militiamen on a poisoning mission, Captain Marvel buried the stunned Nazi under thousands of tons of rock. Nazi took a few minutes to extricate himself from the rubble. He then carved a threat for Captain Marvel, and left.

Despite this promise of a rematch, Abernathy was never seen again. 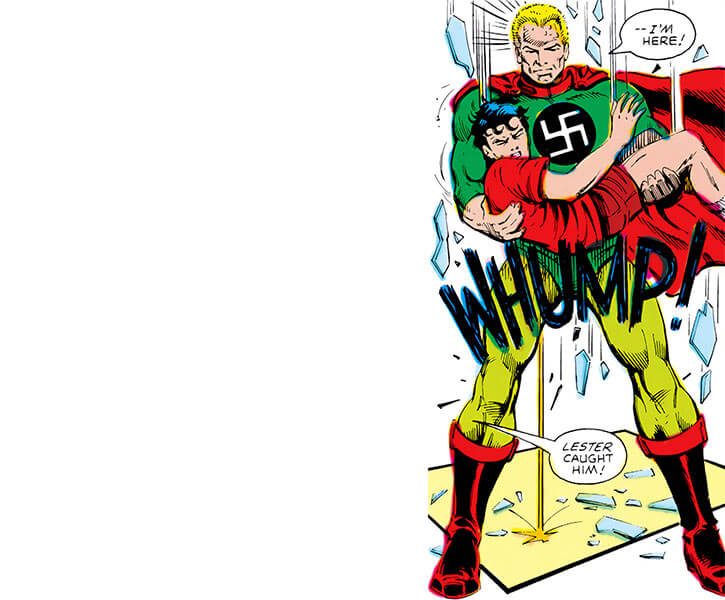 Captain Nazi is a racist, hateful thug given great power.

He’s not exactly a deep thinker, and revels in his capacity to dominate normal persons. Yet he is careful around powerful opponents such as Captain Marvel.

Nazi, as befits his name, has next to no empathy. He just sees people as means to his ends.

He also obsesses about the supposed role of Black folks and Jews, believing such fixations of the Sons of Valhalla as the “ZOG” (“Zionist-Occupied Government”  of the US).

“I got nothing against you… unless you got Jewish blood.”

“Maybe Lester Abernathy volunteered for your little experiment — but he’s history. Captain Nazi took his place — and I don’t take orders — I give ’em !”

CIA toward Racism and anti-Semitism.

The first three incarnations of Captain Nazi (1940s, 1970s and 1980s versions) are impossible to stat up accurately. The material is simply not there to base analysis on.

These writeups thus use educated guesses a lot, and use the numbers in World at War to get a sense of scale when necessary.

The stats block above is done with the assumption that Captain Marvel has a DEX of 09 at that point. Which is important since that’s the only number to benchmark Captain Nazi’s DEX against.

There aren’t that many appearances of that version of Captain Marvel, and some of his scores — including DEX — tend to evolve as he gains experience and is involved in more or less zany genres. The main piece of data is his fight against an Eclipso-powered Superman.

Since most of us think that Superman, at this point of his history, likely had a DEX of 10, a DEX of 09 for Captain Marvel sounds about right. 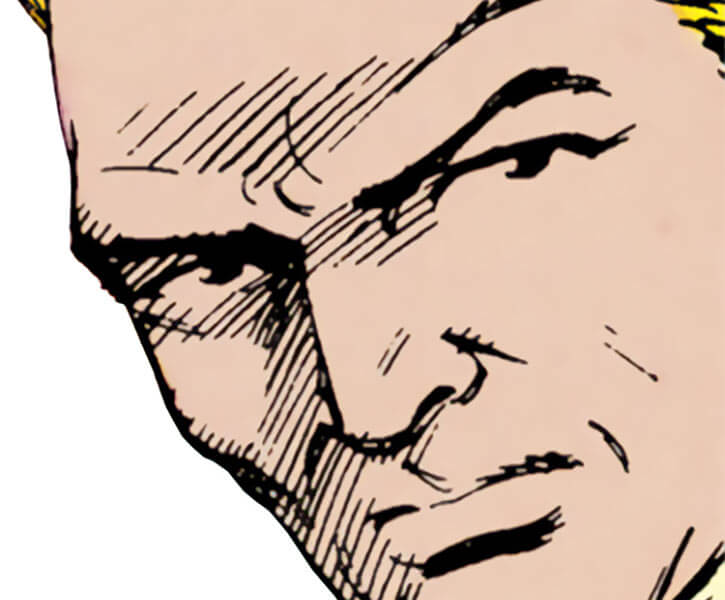 Raise Strength to 18, ditch the Limited Ranks of Enhanced Strength, raise both Toughness and Fortitude by one.