In itself, that’s nothing to write home about. But he was played by Adam West, who would soon become the idol of millions as the 1966+ TV version of Batman (Bruce Wayne).

Which retroactively makes Captain Q cool. In a camp  way. 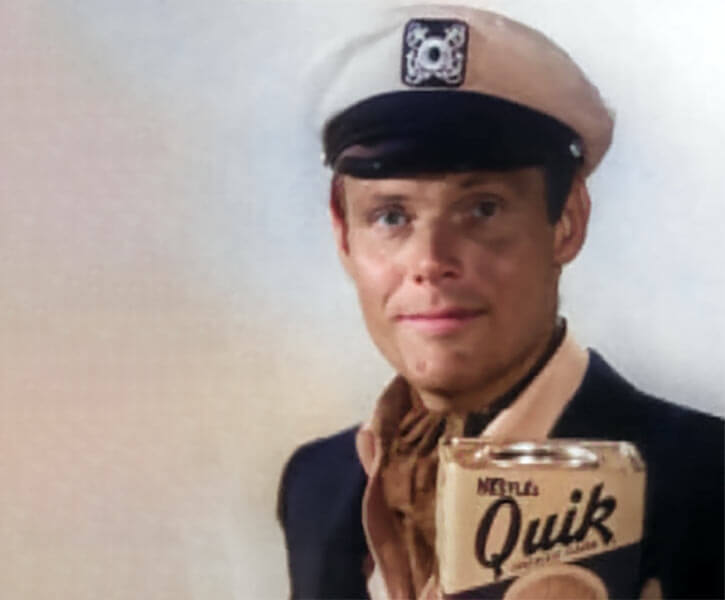 Qui(c)k neural network colouring of a screenshot from an ad.

In addition to the skills required for his line of work, Captain Q has an extreme level of luck on his side.

Captain Q was a highly capable secret agent in the 1960s.

One of his enemies was one Dr Slump, whose ship he sunk by leading one of its own torpedoes back at it.

(If this video gets deleted because the uploader is hijacking a commercial to gain money from commercials shown before the commercial, it will be funny — ed.)

Perhaps due to his successes, Captain Q maintains a light-hearted attitude on the job.

Dr Slump: “Ah, Captain Q ! Join me in a glass of delicious chocolate Quik, would you ?”
Captain Q: “Thank you, Doctor, I could use some energy.” (Switches glasses with Dr. Slump thwarting his poisoning attempt)

“Some people will do anything to get rich, Quick. À tout à l’heure.”

Skills and Languages reasonable for his chosen profession. Since there’s very little material, most stats are of course picked to match the archetype.