Captain Terror possesses all of the powers an abilities of Captain Marvel. He also has a number of military and combat related skills that come as a direct result of his access to “The Cunning of Seth”.

Captain Terror is also credited with the creation of:

Captain Terror is a dead ringer for Captain Marvel. Except that he’s evil, and therefore has a goatee.

In both identities, Captain Terror is a sociopath. His parents were ruthless in their research and their son took after their worst traits. He is power hungry, jealous, petty, and homicidal.

William Batson was the son a pair of ruthless archaeologists. They were investigating the tomb of the Egyptian wizard, MAZAHS.

Following legends that his tomb contained riches beyond belief, they explored deep within the inner sanctum. Thus they unwittingly released the evil wizard, who had been in hibernation for nearly 3,000 years. After he imprisoned them, he learned of their two children. Draining the Batson’s life essence, he headed to search for the children.

William was the primary heir. Howbeit, his uncle was executor for his parents will. Said uncle spent most of his time using up Willy’s inheritance.

But Willy had learned a trick or two from his parents, known for their unethical methods of acquiring artifacts and backstabbing potential rivals. He murdered his uncle in cold blood. Then went on the run, when the murder was discovered.

He ran into a cave outside of his hometown of Faucet City, where he met the wizard, Mazahs. Mazahs bestowed great power on Willy in exchange for the spreading of chaos and evil on his behalf.

The power of Mazahs

Upon speaking the wizard’s name, Willy gained the traits of the following ancient gods and demigods:

Dubbed “Captain Terror”, Willy became one of the major crimelords in the area of the country surrounding Faucet City. Working from the WIZZ radio building, Terror rules Faucet with an iron fist. He keeps interference out of his city with an almost impenetrable force field.

His chief henchmen are his younger brother, Freddie (who had been given up for adoption years earlier), and Freddie’s lover, Mary. They share in Willy’s power as Major Terror and Bloody Mary. Thus, each of them weakens the power of Captain Terror – something which only increases the Captain’s hatred for them both.

The fact that Freddie took the name “Major Terror”, implying that he somehow outranks Willy, doesn’t help matters either.

Captain Terror is intended to exist in the anti-matter universe introduced in JLA: Earth 2, populated by the Crime Syndicate of Amerika.

Drawbacks:
Alter Ego (Controllable); Loss Vulnerability: Fire Attacks (Fire-based attacks that cause RAPs of damage to Captain Terror cause him to revert back to William Batson, affecting all Attributes and Powers); Secret Identity. 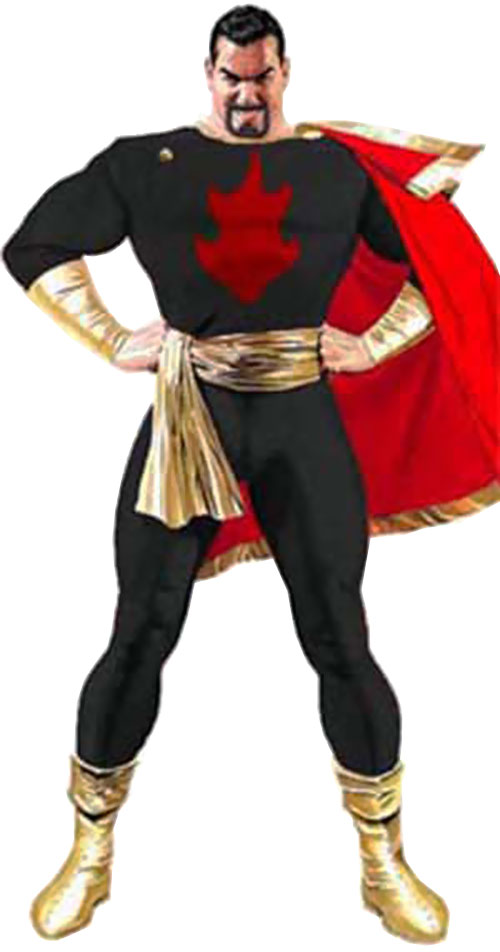